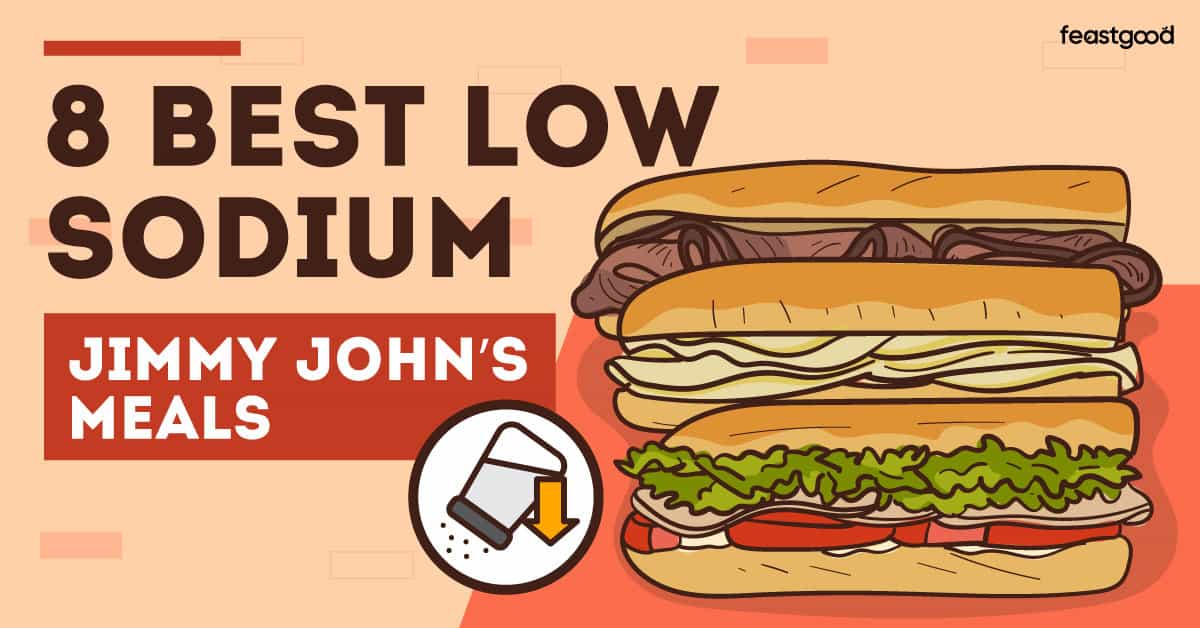 You may have heard that deli meats are high in sodium, and you wonder whether your favorite sandwiches from Jimmy John’s can be part of a lower-sodium diet.

There are eight sandwiches at Jimmy John’s that would be considered lower in sodium:

Here’s What You Need To Know:

An “unwich” is one of Jimmy John’s famous sandwiches served in a lettuce wrap instead of on French bread or thick-sliced wheat bread.

The “Little John” is called the “skinny mini” version: a smaller size sandwich (6.5” instead of the regular 8” or 16” options).

The bread available at Jimmy John’s contain sodium (240-1420mg), so the traditional sandwich with the lowest sodium content is the Slim 6 (8” size), served on thick-sliced wheat bread (860mg).

This means that you are better off sticking to the lettuce-wrapped “unwiches” or getting the Little John’s mini sandwiches compared to ordering a regular sandwich on bread if you are trying to lower your sodium intake.

Is Jimmy John’s High In Sodium?

If you are concerned about your sodium intake, and you need a quick and convenient meal, you are better off checking out low-sodium options at other fast food chains such as Panera, Subway and Chipotle.

But, if you do find yourself at Jimmy John’s and you’re keeping an eye on your sodium intake, there are some options available (I give you a full breakdown below).

What Is Considered Low Sodium At Jimmy John’s?

The menu items at Jimmy John’s that are considered low sodium are those that have less than 650mg of sodium per serving.

These guidelines translate into 400-766mg of sodium per meal (based on 1200-2300mg per day), assuming three meals per day.  The options presented in this article fall within this range.

If you’re having a meal at Jimmy John’s, you can still stay within your daily recommended target by making low-sodium choices at your other meals.

Here are six simple tips to reduce your sodium intake at Jimmy John’s:

Opt for an “unwich”

Getting your sandwich as a lettuce wrapped “unwich” saves on sodium. You can decrease your sodium intake by as much as 1420mg by getting a lettuce wrap instead of a 16” French bread sandwich.

Here is a quick comparison of the breads/wraps at Jimmy John’s for your reference:

I’ll explain TBO and LBI in the next section.

Jimmy John’s uses the abbreviation TBO for “Take Bread Out” meaning that they scoop some of the bread out of the middle of the French bread before making your sandwich. This reduces the amount of bread (and the sodium from the bread) in your order and makes more room for the sandwich fillings like meat & vegetables.

As you can see from the chart above, taking bread out saves:

Note that by default, some sandwiches come with bread taken out (TBO) to make room for the sandwich fillings.  This applies to the following sandwiches:

Plus other TBO sandwiches:

Other sandwiches are served with a full piece of French bread, meaning they leave the bread in (LBI) by default.  You can ask for these sandwiches to be served as “TBO” in order to save 240mg of sodium:

To lower the sodium content when ordering at Jimmy John’s, you can select the “skinny mini” Little John version of the sandwich so that you get a smaller portion size for the high sodium foods.  Or, you can choose the “EZ” portion size (e.g. “go easy on the ham”).

While the Little John B.L.T is still not a low sodium choice, it does show a significant savings in sodium (580-660mg) compared to the regular size J.J.B.L.T.

Skip the Cheese & Hold the Pickles

One jumbo kosher dill pickle has 1710mg of sodium and one regular serving of provolone cheese for an 8” sandwich has 240mg of sodium.  Steering clear of these two items will significantly save on sodium.

If you don’t want to miss out on cheese entirely, you can also ask for an “EZ” portion (a “lite” or smaller serving size).  Getting an EZ portion of provolone cheese on a standard 8” sandwich has only 120mg, which is half of the 240mg of sodium in a regular serving size.

Certain types of deli meat have higher sodium content than others.  If you customize your sandwich to use only the lower-sodium deli meats, you can reduce your sodium intake.

Here is a handy chart of nutrition information from Jimmy John’s to compare the sodium content in a serving of meat.

Watch out for Toppings & Condiments

Certain condiments at Jimmy John’s are sodium-free, while others can be much higher in sodium.  Choose condiments & toppings that are lower in sodium to reduce the overall sodium content of your sandwich.

Here are the toppings and condiments available for sandwiches at Jimmy John’s, listed in order based on sodium content from lowest to highest (information is shown for a standard 8” sandwich serving size).

Adding fresh vegetables (all of which have 0mg of sodium) is a great way to add flavor, taste and texture to your sandwich with no added sodium.

All of the “Slim” sandwiches are served with just meat and bread only (or cheese, where listed).  In order to keep the sodium content low, it’s important to choose toppings with low or no sodium content.

You can also make the sodium content of a Slim sandwich even lower by getting an EZ serving size of cheese, or skipping it entirely (if applicable), and by asking for TBO (take the bread out; by default, Slim sandwiches are served as LBI “leave bread in”).

The lowest sodium choice at Jimmy John’s is the Slim 6 sandwich served as a lettuce wrapped “unwich” with 470mg for a standard 8” serving.

The Slim 6 is very basic, with just provolone cheese, which would be wrapped in lettuce to make an unwich.  I’d be looking to add all of my favorite fresh vegetables and the oregano-basil herb blend to add flavor without adding any sodium.

I would cut the sodium content in half by asking for an “EZ” serving size of cheese.

Another very low sodium item from Jimmy John’s is the Slim 2 unwich, with 490mg of sodium.

This sandwich is just roast beef wrapped in lettuce.  As I showed in the chart of meats, this is the second-lowest sodium meat at Jimmy John’s.  If I substituted capocollo instead, I would reduce the sodium content by 140mg, down to 350mg.  Or, I could drop the sodium content to 240mg by getting an EZ serving size of roast beef instead of the standard 8” serving size.

Again, I would be looking to pile my unwich high with fresh vegetables and herbs.  If I switched to capocollo and added a packet of yellow mustard, the total sodium content would be 415mg.

The Slim 4 Unwich is just turkey breast wrapped in lettuce, with a total of 540mg of sodium coming from the standard serving of turkey.

I could reduce the sodium to 270mg by asking for an EZ serving size of turkey breast.  Then I could add avocado spread (65mg) and still have a meal with only 335mg of sodium.

The Little John 2 is similar to the Slim 2 because it is a roast beef sandwich, but it also includes lettuce, tomato and mayo.

By default, it comes on Little John French Bread TBO, so the best way to reduce the sodium would be to ask for the EZ serving size of roast beef (-120mg), or you could ask for yellow mustard instead of mayo, which saves 10mg of sodium.

The Little John 4 is like the Slim 4 by featuring turkey breast, along with lettuce, tomato, and mayo.  Just like the Little John 2, you can reduce the sodium with the EZ serving size of turkey breast (-135mg), and get oil & vinegar instead of mayo (-50mg).

The Little John 6 is NOT just like the Slim 6; instead, it is a mini version of the #6 Veggie sandwich with provolone, avocado spread, cucumber, lettuce, tomato, and mayo.

Since cheese is high in sodium, a quick way to cut the sodium content is to ask for the EZ serving size (-60mg).  The creamy avocado spread might also be enough to allow you to skip the mayo (-75mg).

The Little John 3 is tuna salad with cucumber, lettuce & tomato, making it the mini version of original sandwich #3 Totally Tuna.  We saw that tuna salad was the second-highest sodium choice for meat (after the salami & capocollo combination), so asking for an EZ serving size of tuna salad reduces the sodium content by 180mg.

Just like the other options, an easy way to cut the sodium is to ask for the EZ serving size of meat (-250mg).

Except for the 8 options above, most of the menu items at Jimmy John’s are high in sodium.

All of the 16” sandwiches on French Bread have over 2000mg of sodium.  This is because of the large portion sizes of bread and meat (and cheese and toppings, where applicable).

The highest sodium menu items at Jimmy John’s are:

As you can see, these choices are 2-5 times higher than the recommended total daily intake of sodium (1500-2300mg).

How Much Sodium Is In A Jimmy John’s Sandwich?

The average sodium content of a Jimmy John’s sandwich, across all 107 options (ranging from Little John’s and lettuce wrapped “unwiches” to 16” sandwiches on French bread) is 2025mg.

What is the Lowest-Sodium Jimmy John’s Sandwich?

The lowest-sodium sandwich at Jimmy John’s is the Slim 6 Unwich, with 470mg of sodium.

What is the Highest-Sodium Jimmy John’s Sandwich?

The highest-sodium sandwich at Jimmy John’s is the 16” J.J. Gargantuan sandwich, with 7750mg of sodium.

How Much Sodium Is In A Jimmy John’s Veggie Sandwich?

How Much Sodium Is In A Jimmy John’s Beach Club?

How Much Sodium Is In A Jimmy John’s Turkey Tom Sandwich?