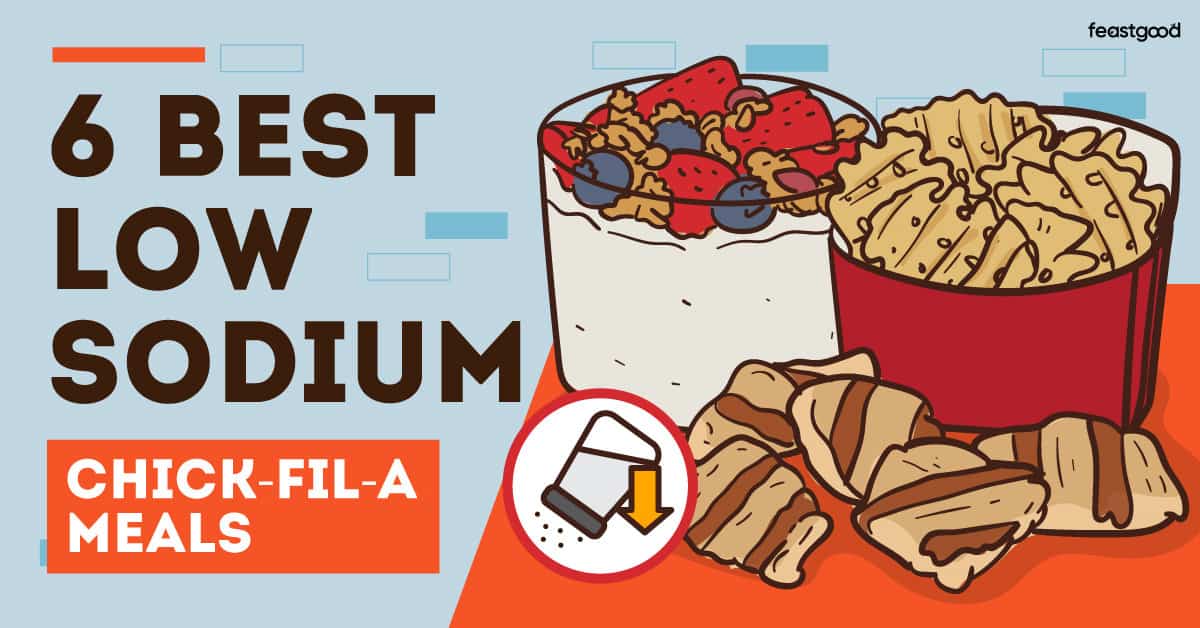 When ordering from Chick-Fil-A on a low-sodium diet, it’s important to know what menu items to order and how to customize them to reduce their sodium content even further.

I’ve researched the Chick-Fil-A menu, and here was what I found.

The best low-sodium meals at Chick-Fil-A are:

Although there are a few low-sodium options at Chick-Fil-A, the truth is that most Chick-Fil-A menu items are pretty high in sodium.

Is Chick-Fil-A High In Sodium?

Compared with other fast-food restaurants I’ve reviewed, Chick-FIl-A has the fewest low-sodium menu items, so it may not be the best choice for those trying to reduce their sodium consumption.

Chick-Fil-A’s main menu items like their breakfast sandwiches, chicken sandwiches, and meal deals are too high in sodium to be considered a healthy option for those trying to reduce their sodium intake.

What Is Considered Low Sodium At Chick-Fil-A?

If you’re having three main meals per day, each meal should contain around 400 to 500mg of sodium to stay within the recommended amount of sodium.

Having meals that are higher than 500mg of sodium would be considered moderate to high because you would have to reduce your sodium content at other meals of the day to stay within the recommended amount.

It’s important to note that just because a menu item is low in sodium doesn’t necessarily mean that it’s healthy. If you’re looking for healthier menu items from Chick-Fil-A, you should look for low-calorie options.

Tips On Reducing Sodium At Chick-Fil-A

To reduce your sodium intake at Chick-Fil-A, you can:

One major way to reduce your sodium consumption at Chick-Fil-A is to order grilled chicken over fried breaded chicken because grilled chicken is significantly lower in sodium than the regular chicken.

Another great way to customize your order to reduce your sodium intake is to choose lower sodium condiments or skip condiments altogether.

The lowest sodium condiments you could choose are the honey roasted BBQ or honey mustard sauces. The condiments to avoid are the sweet & spicy sriracha and zesty buffalo sauces.

Salad dressings are another significant contributor to sodium consumption when eating out. Salads are often the highest sodium menu items despite having more nutrients than other menu items.

To reduce the sodium content of Chick-Fil-A salads, you can skip the salad dressing altogether or ask for it on the side to control the serving size.

I would recommend using the fat-free honey mustard or light balsamic vinaigrette dressings because they’re the lowest in sodium. I recommend you avoid the creamy salsa dressing, which is the highest in sodium.

The last customization hack for reducing your sodium intake is to order menu items without cheese because cheese adds 140 to 230mg of sodium per slice.

It’s best to remove cheese altogether for a lower sodium sandwich, but if you must include the cheese, then opt for Colby jack or pepper jack.

The lowest sodium menu item at Chick-Fil-A is a fruit cup with 0mg of sodium. The fruit cup can be ordered as a side to other menu items or eaten by itself as a snack.

I would pair the fruit cup with an order of 5 Grilled Nuggets to get a high protein, nutrient-dense meal with only 270mg of sodium.

The second lowest sodium menu item at Chick-FIl-A is the Greek Yogurt Parfait which only has 80mg of sodium. The greek yogurt parfait has 13 grams of protein, fresh berries for a nutrient boost, and a granola crunch.

I would order the greek yogurt parfait as a grab-and-go breakfast or an afternoon snack because the protein in the yogurt will help hold you over until your next meal.

Another low-sodium option from Chick-Fil-A is their kale crunch side which has 140mg of sodium and is loaded with nutrients.

The kale crunch side is “a blend of Curly Kale and Green Cabbage tossed with an Apple Cider and Dijon Mustard vinaigrette, all topped off with salted, crunchy Roasted Almonds.”

I would pair this with the grilled nuggets (5ct.) for another high protein, nutrient-dense meal for only 410mg of sodium.

Surprisingly, all serving sizes of chick-fil-a waffle fries are low enough in sodium to be considered a good option for those trying to reduce their sodium consumption.

The fries lack nutrition, so I would pair them in the following ways:

The highest protein and lowest sodium menu item is chick-fil-a’s 5-piece and 8-piece grilled nuggets with only 270mg and 440mg of sodium, respectively.

The nuggets are a great option because they will help to keep you full for longer thanks to their protein content (5ct: 16g, 8ct: 25g).

The only thing the nuggets are lacking is some more nutrients (vitamins, minerals, fiber) but you could pair these nuggets with a fruit cup or kale side crunch for additional nutrients while staying under 500mg of sodium.

The last menu item from Chick-Fil-A that is considered low in sodium is their hashbrowns because one serving of hashbrowns (77g) has 440mg of sodium.

The hashbrowns are high enough in sodium that it would be difficult to pair them with another menu item without exceeding the 500mg sodium limit.

The only menu item that would pair within this recommended range is the fruit cup. The fruit cup would boost the nutrient content of the hashbrowns without adding any sodium.

Chick-Fil-A’s hashbrowns are one my favorite foods to order when I’m bulking because they’re delicious and they help me increase my calories without dramatically increasing my sodium.

The meals to avoid at Chick-Fil-A are 1500mg of sodium or more because these are extremely high sodium items.

The meals to avoid at Chick-Fil-A are:

What Is The Lowest Sodium Menu Item At Chick-Fil-A?

The lowest sodium menu item at chick-fil-a is their fruit cup which has 0mg of sodium per serving, making it a great snack or side order for those trying o reduce their sodium consumption.

How Much Sodium Is In One Chick-Fil-A Sandwich?

How Much Sodium Is In A Chick-fil-A Cool Wrap?

Chick-FIl-A’s Cool Wrap has 1420mg of sodium, which would be considered very high in sodium and, therefore, not the best option for those trying to reduce their sodium consumption.