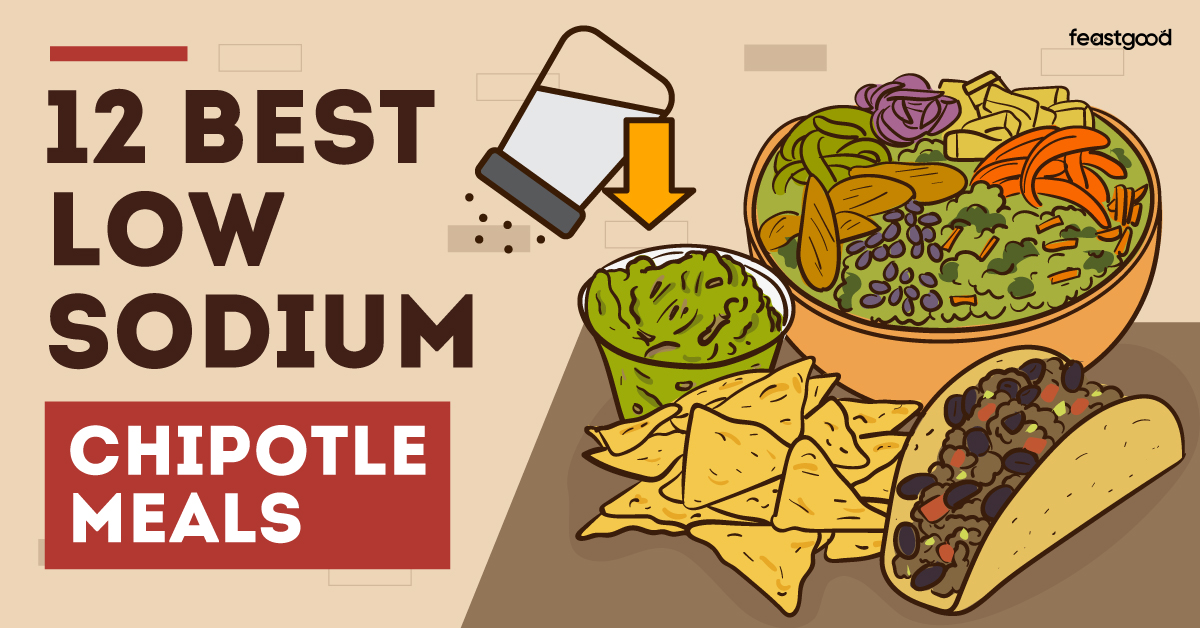 Chipotle is a fantastic fast-food option for those who want to reduce their sodium consumption because of how much you can customize your order, so it’s just a matter of knowing what to order.

Although Chipotle has lots of low sodium options on their menu, if you don’t combine them correctly you could take low sodium ingredients and make a very high sodium meal by accident.

Is Chipotle High In Sodium?

Chipotle is lower in sodium than many other fast-food restaurants.

Almost all of the individual ingredients at Chipotle are low in sodium.  However, it would be rare to get a single ingredient item when ordering at Chipotle.

Typically when you order from Chipotle you would order a bowl, taco, or burrito as a base and then add a protein source, vegetables, and other desired toppings.

All of these ingredients on their own will have some sodium, which individually isn’t a lot, but put together can add up.

All that to say, the ingredients at Chipotle are low in sodium but the meal itself may not be depending on which toppings and proteins you choose.

What Is Considered Low Sodium At Chipotle?

Menu items that are considered low in sodium at Chipotle are those that have less than 500mg of sodium per serving.

The 500mg guideline comes from research that suggests that those trying to maintain healthy blood pressure and keep their sodium intake low should consume between 1200 to 1500mg of sodium per day.

If you’re eating 3 meals a day, then per meal you could have 400 to 500mg of sodium and be on target for this recommended amount.

If you’re having more than 3 meals per day, then you should have even less sodium per meal.

Tips On Reducing Sodium At Chipotle

To reduce your sodium intake while eating at Chipotle you should:

Choose A Taco, Bowl, or Salad

When you’re trying to reduce your sodium at Chipotle it’s best to order a taco, a bowl, or a salad and pass on the burrito because the flour tortilla that Chipotle uses for its burritos is 600mg of sodium by itself.

The salad base is 0mg, the bowl base is 190mg (if you choose brown rice), and the flour tortilla for the tacos is 160mg. These are all more favorable options for those trying to reduce their sodium consumption.

Another tip for reducing your sodium consumption at Chipotle is to select a lower sodium protein source for your meal.

These are the best protein source options at Chipotle because they’re under 500mg of sodium. Those that are lower can be added to a bowl or taco without going over the recommended amount of sodium.

Those that are higher, like the carnitas, should only be served on a salad because the base on the salad is 0mg of sodium.

Pick The Brown Rice Rather Than The White Rice

If you’re adding rice to your meal, it’s best to always choose brown rice over white rice because it has less sodium per serving.

A serving of white rice at Chipotle has 350mg of sodium, but brown rice only has 190mg of sodium. This gives you an opportunity to add more to your meal without going over the recommended amount of sodium.

Have One Flavor Enhancer Instead Of Multiple

When ordering from Chipotle it’s best to choose one flavor enhancer (guacamole, salsa, queso, sour cream) instead of multiple.

These flavor enhancers are high in sodium for the amount that you actually get, so it’s best to limit how much of these you’re using in your meal.

Pass On The Cheese

Another tip for reducing your sodium consumption at Chipotle is to pass on the cheese because the sodium in cheese is relatively high per serving.

This one pains me because I love cheese, but it’s not your best option when you’re trying to keep your sodium intake low.

In just 1oz of cheese at Chipotle, there is 200mg of sodium, so this small amount of cheese would severely restrict how many other components you could add to your meal.

Order From The Kids Menu

Lastly, ordering from the kids menu at Chipotle is a better choice when you’re trying to reduce your sodium consumption because the serving sizes are smaller and therefore have less sodium than the regular sizes.

Related Article: What To Eat At Chipotle If You’re Bulking or Cutting (6 Meals)

The lowest sodium meal combination that you could have at Chipotle is a Kid’s size chip and guacamole. The chips have 95mg of sodium and the guacamole has 190mg of sodium.

Choosing the kid’s size serving, which is 250mg, over the regular serving (760mg) is the best option if you’re trying to reduce your sodium consumption.

The second best low sodium meal option at Chipotle is a fajita veggie and brown rice bowl, which has 340mg of sodium.

This bowl has roasted veggies with fajita seasonings and is served with cilantro-lime brown rice.

You could also add sour cream to this bowl for an extra 30mg of sodium, but unfortunately, most other flavour additions (guacamole, salsa, and queso) are too high in sodium.

Another low sodium option for Chipotle is the kid’s size chips and queso, which has 345mg of sodium.

The chips themselves have 95mg of sodium and the serving of queso has 250mg of sodium. Ordering the kid’s size is the perfect way to get that food that you love but without as much sodium.

A black bean and fajita veggies salad is a great high volume low sodium option because it’s the largest quantity of food you can get for 360mg of sodium at Chipotle.

The black beans themselves have 210mg, the fajita veggies have 150mg, and the spring mix that it’s served on has 0mg. You could use olive oil for your dressing without adding additional sodium.

There is also a black bean taco that you could have if you’re trying to reduce your sodium consumption because it only has 370mg of sodium.

The taco itself has 160mg of sodium and the black beans have 210mg, and it can be served with lettuce that has 0mg; however, this doesn’t include any type of sauce that you may want.

A black bean & rice bowl is another great low sodium option at Chipotle because it has 400mg of sodium, which is under the 500mg guideline.

The black beans themselves have 210mg, and the cilantro-lime brown rice has 190mg. I would add lettuce (omg) and ask for a drizzle of salsa instead of the normal serving size.

This way you could get a bit more flavor without as much sodium because a regular serving of salsa has between 260 to 550mg of sodium.

The chicken and fajita vegetable salad is my favorite low sodium choice at Chipotle because it’s delicious and has 460mg of sodium.

I like this combination because the fajita seasoning on the veggies mixed with the olive oil makes a very tasty dressing, so I don’t even miss adding a vinaigrette of some sort.

Chipotle’s chicken taco is also a lower sodium option for those trying to reduce their sodium intake.

The chicken itself has 310mg of sodium, the taco has 160mg, and altogether this comes out to 470mg. You could also add sour cream for an additional 30mg of sodium, which would be right at the limit for how much sodium you should have in your meal.

Another option for a low sodium meal at Chipotle is a steak and fajita veggies salad, which has 480mg of sodium.

You could omit the fajita veggies if you wanted to reduce your sodium intake further but the sacrifice in flavor wouldn’t feel worth it to me.

A steak taco is a lower sodium option at Chipotle that you could choose if you want to keep your sodium intake low.

The steak taco has 490mg of sodium because the steak has 330mg on its own and the taco shell has 160mg. You could add lettuce without any additional sodium, but you likely won’t be able to add a sauce without going over the 500mg guideline.

A vegetarian option at Chipotle that is lower in sodium is the fajita veggies and cheese taco, which has 500mg of sodium.

The last option at Chipotle that would be considered low in sodium is the chicken & brown rice bowl, which has 500mg of sodium.

The chicken has 310mg of sodium and the cilantro-lime brown rice has 190mg of sodium; however, it may be a bit bland because it’s already maxed out the sodium recommendation without a sauce factored in.

The meals to avoid at Chipotle are those that have single ingredient menu items that are already more than 500mg of sodium because these items would still typically be paired with other menu items to be consumed.

If they’re too high in sodium on their own, then they’re definitely not suitable as part of a meal.

The menu items to avoid at Chipotle are:

What Chipotle Item Has The Least Amount of Sodium?

At Chipotle, the kid’s menu has oranges, blueberries, and mandarins which are the menu items that have the least amount of sodium at 0mg per serving.

How Much Sodium In Chipotle Chicken Bowl?

A Chipotle Chicken Bowl would have 500mg of sodium with just the brown rice and chicken. If you were to also have beans this would add 210mg of sodium. This is excluding any sodium that would come from additional toppings that you order.

How Much Sodium In Chipotle Steak Bowl?

A Chipotle Steak Bowl has 520mg of sodium from just the brown rice and steak, and if you were to add beans to the bowl then that would be an additional 210mg of sodium. This excludes any toppings or flavor enhancers that you may also want.

How Much Sodium In Chipotle Cauliflower Rice?

Chipotle’s Cilantro-Lime Cauliflower Rice has 210mg per serving, which is actually higher in sodium than the Cilantro-Lime Brown Rice at Chipotle which has 190mg of sodium.

How Much Sodium In Chipotle Chips?

How Much Sodium In Chipotle Chicken Burrito?

The sodium content of a Chipotle Chicken Burrito is 910mg for just the burrito tortilla and the chicken itself. If you were to add vegetables and sauces, then the sodium content would be higher.

How Much Sodium In Chipotle Queso?

The sodium content of Chipotle Queso Blanco is 250mg for an entree size, 490mg for a side order, and 980mg for a large order.

How Much Sodium In Chipotle Salsa?

500 Calorie Deficit: Is It Healthy & How Much Can You Lose?