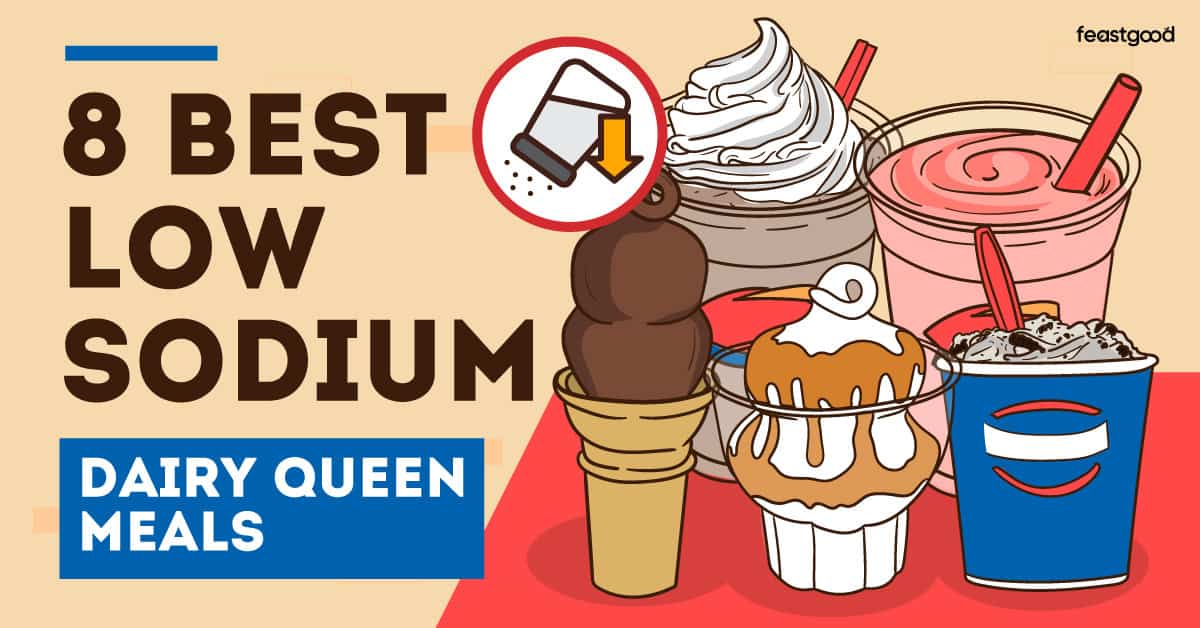 If you’re trying to reduce your sodium consumption while eating at Dairy Queen, it may be difficult to know what to order at first glance, so I’ve researched and picked out the low sodium options for you.

The best low-sodium meals at Dairy Queen are:

Although most of the Dairy Queen menu items that are low in sodium are variations of ice cream, there are ways that you can customize your order to reduce the sodium content of their burgers and sandwiches, too.

Is Dairy Queen High In Sodium?

Dairy Queen is considered high in sodium because they have more high sodium meals (greater than 700mg) than low sodium meals (less than 500mg of sodium). In fact, all of their meal deals, which are their most popular options, have moderate-to-high sodium content.

If you’re looking for a low sodium fast food option, Dairy Queen isn’t the best option because they have some of the highest sodium menu options of all the fast-food restaurants I’ve reviewed.

If you’re looking for better low sodium fast-food options, my top 3 recommendations are:

What Is Considered Low Sodium At Dairy Queen?

A low sodium menu item would be any item that has less than 500mg of sodium because the recommended amount of sodium for those who need to reduce their sodium consumption is  1200 to 1500 mg per day.

Assuming that you’ll be eating three meals per day, your sodium intake should be less than 500mg per meal to stay on target.

With this in mind, I’ve reviewed the Dairy Queen menu to see which menu items would be considered low sodium, and it appears that the only low sodium menu items are snacks and desserts.

However, there are ways that you can reduce the sodium content of a Dairy Queen meal by customizing your order.

To reduce your sodium intake at Dairy Queen, you can:

Steer Clear Of The Fried Chicken

If you want to reduce your sodium consumption then you should avoid the fried chicken from Dairy Queen at all costs because all of their fried chicken menu items are extremely high in sodium.

Switching out the sauces on your burger or your dipping sauces with mustard, ketchup, mayo, and BBQ can help you reduce the sodium content of your meal. Meals would typically be served with one of their specialty sauces that pack a sodium punch.

Pass On The Bacon & Cheese

Another way to customize your Dairy Queen order to reduce the sodium content is to pass on the bacon and cheese because these flavor enhancers are loaded with sodium.

I recommend skipping the cheese and bacon altogether to lower the sodium content of your meal, but if you must add a flavor enhancer then go for swiss cheese because it has the lowest sodium content.

Order From The Kids Menu

Another option to reduce your sodium consumption at Dairy Queen is to order from the Kid’s Menu rather than the regular menu because the smaller serving sizes on the Kid’s menu will help to reduce the sodium content of your meal.

An important note before I dive into these low-sodium options is that just because something is low in sodium doesn’t necessarily mean that it’s healthy.

Besides the side salad, the rest of the low sodium menu items are desserts, which may be low in sodium but are high in calories, saturated fat, and sugar.

For example, a small Royal Oreo Blizzard only has 490mg of sodium, but it has 860 calories, 17 grams of saturated fat, and 88 grams of sugar. This puts you close to the upper limit for saturated fat per day (22 grams) and over the recommended amount of sugar (24 grams for women; 36 grams for men).

Most of the following options are menu items that I would suggest having every once in a while rather than every day. If you’re looking for healthier options from Dairy Queen, check out their lowest-calorie desserts.

The lowest sodium option at Dairy Queen is their side salad which only has 15mg of sodium, but likely isn’t enough of its own to keep you full for very long because it lacks a protein source.

Normally I would suggest pairing a side salad with a protein source like chicken, but the fried chicken from Dairy Queen is so high in sodium that pairing it with this low-sodium side salad would drastically increase the sodium content of this meal.

Another great low sodium option from Dairy Queen are their Blizzards (Mini & Small Sizes Only), which are different flavors of soft ice cream blended with flavor enhancers like cookies, peanut butter, cookie dough, and your favorite chocolates.

It should be noted that the small size of oreo dirt pie, Reese pieces cookie dough, and royal Reese’s brownie are above 500mg of sodium and therefore aren’t low in sodium.

The Small & Medium Shakes from Dairy Queen are another low-sodium option that you could order when trying to reduce your sodium content. The DQ Shakes are made with DQ soft serve blended with different flavors to make a creamy shake that tastes delicious.

These shakes have between 15 to 25g of protein depending on the size and flavor you choose, which is beneficial because protein helps keep you full. This shake would be a great afternoon pick-me-up to hold you over to supper.

Another low-sodium option that you can have at Dairy Queen are their MooLattes which are frozen blended coffees mixed with different flavor combinations. This is a great low-sodium option for those who need a caffeine boost in the afternoon.

Dairy Queen’s Sundaes are also a low-sodium option, with fewer than 400mg of sodium in all flavors and sizes. DQ sundaes are a great low-sodium dessert that you can order to curb your sweet tooth after supper.

Dairy Queen’s Treatzza Pizzas are an exciting low sodium option that is perfect for family get-togethers or celebrations because one slice of these pizzas has 110mg of sodium or less.

The treatzza pizzas are served on a fudge crunch crust with vanilla soft serve and topped with your flavors toppings of choice.

The DQ Treatzza’s are my favorite DQ menu item to have when I’m bulking because they help me increase my calories without feeling super bloated because it’s lower in sodium.

Dairy Queen Smoothies may not be the healthiest smoothies with 49g of sugar and only 3g of protein, but they are low in sodium with 180mg of sodium or less per serving.

DQ smoothies could be a great grab-and-go snack option, but I wouldn’t recommend having them as a meal because they don’t have enough protein to keep you full for very long.

The meals to avoid at Dairy Queen are:

Is There Sodium In Dairy Queen Ice Cream?

Yes, there is some sodium in dairy queen ice cream but not enough for it to be considered high in sodium. In fact, nearly all of their ice cream cones, shakes, and blizzards (mini & small sizes) are considered low in sodium because they have less than 500mg per serving.

How Much Sodium Is In A DQ Blizzard?

How Much Sodium Is In A DQ Sundae?

All flavors and sizes of DQ Sundaes are considered low in sodium because they contain less than 500mg of sodium. A small has 155mg, a medium has 223mg, and a large has 302mg on average.