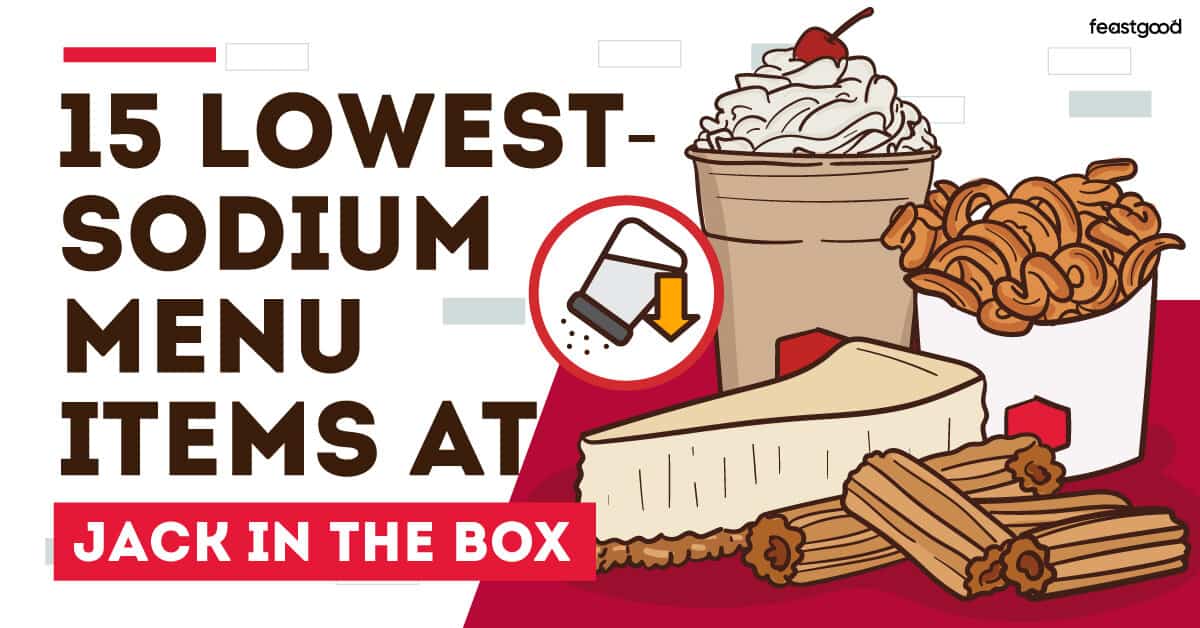 Most of the menu items at Jack in the Box are high in sodium, which can make it challenging to eat there if you are trying to limit your sodium consumption.

To help you manage your sodium intake, I’ve written this article to highlight the lowest-sodium menu items from Jack in the Box.

The lowest-sodium menu items at Jack in the Box are:

As you can see, these menu items are exclusively side dishes and desserts, and not main menu meal items.

So, while they are lower in sodium, they are also mostly high in calories, coming from added sugar and fats.  These types of foods may not be high in sodium, but it is important to consume them in moderation for your overall health.

To help you navigate the menu at Jack in the Box, I will also share tips on how to customize your order to reduce the sodium intake.

The details of this article include:

Is Jack in the Box High In Sodium?

Jack in the Box has two dozen (24) menu items with more than 1500mg of sodium, which far exceeds the threshold of what’s considered a “low sodium meal.”

With that said, there are a few tips for customizing your order at Jack In The Box to reduce the sodium content somewhat, and I’ll cover those in the sections that follow.

Truthfully, though, if you’re someone who needs to eat a low sodium diet because your healthcare provider has advised you to lower your sodium intake, then Jack In The Box is not your best fast food option.

We’ve covered several fast food restaurants that are better for low sodium diets, the top 3 being:

What Is Considered Low Sodium At Jack in the Box?

The menu items at Jack in the Box that are considered low sodium are those that have less than 500mg of sodium per serving.

This is based on the American Heart Association recommendation of 1200-1500mg of sodium per day for people who need to follow a low-sodium diet to manage a health condition, such as high blood pressure.  The guideline increases to 2300mg for healthy adults.

Tips On Reducing Sodium At Jack in the Box

To reduce your sodium intake at Jack in the Box you can:

The average hamburger bun has about 200mg of sodium.

You can ask for any burger or sandwich at Jack in the Box to be served “bunless” and the team will make it without the bun and serve it in a tray.

Cheese is high in sodium.  Getting your burger, pita, burrito, taco or sandwich without cheese can save 80-200mg of sodium.

If you don’t want to skip the cheese entirely, you could also make a lower-sodium substitution such as getting real Swiss cheese instead of American cheese on your cheeseburger.

Be Mindful of Condiments

Some sauces, dressings and other condiments are higher in sodium than others.  Choose lower-sodium options, or opt for vegetables as toppings.

Here is a chart of the various sauces, dressings and other toppings, listed in order from lowest sodium content to highest.

To lower the sodium content when ordering at Jack in the Box, ask for your French fries to be made unsalted.

This will allow you to save approximately 50-100mg of sodium in your order.

Order from the Kid’s Menu

Eating Low Sodium At Jack in the Box: 15 Options

As stated previously these low sodium menu items are side dishes and desserts (not meals).

Unfortunately, these options do not allow you to create an overall balanced meal that is low in sodium at Jack in the Box.  Even in combination, these items do not create meals that are balanced in a way that is good for your overall health.

As a nutrition coach, I advise my clients to create meals that include a source of protein such as a chicken breast or hamburger patty, a source of starch like a hamburger bun, a generous serving of vegetables and/or fruit, and if needed, some added fats like butter or olive oil if the meat is quite lean.

All of the menu items at Jack in the Box that provide protein (burgers, sandwiches, burritos) are too high in sodium to be included in a low-sodium meal.

The low-sodium menu items below are snacks at best, and many of them are very high in added sugar.

All of this to say: sodium content is not the only factor to consider when it comes to your health.

For example, the American Heart Association also recommends limiting added sugars to no more than 6 tsp (25g) per day for women and 9 tsp (36g) for men. Just one 16-oz milkshake has more than 60g of sugar, and the 24-oz milkshakes have more than 100g of sugar, so even though they are low in sodium, they are very high in added sugar.

With that said, if you do end up at Jack in the Box and you are hungry for a low-sodium snack, you can check out the following items:

With only ten milligrams of sodium (10mg), the plain side salad is the lowest sodium menu item at Jack in the Box.  This is a great addition to any other menu item to add vegetables to make a more healthful meal.

Keep in mind that some of the salad dressings are very high in sodium.  Plain vinegar or the Low Fat Balsamic Vinaigrette Dressing (370mg sodium) are the best options.

The next lowest sodium menu item is the Chiquita Apple Bites snack.  You could even skip the caramel sauce and just eat the apple slices to get a low sodium snack that is good for you.

Similar to the side salad, this is a great choice for a side dish with a meal instead of a higher-sodium side like French fries or onion rings.

I definitely don’t recommend cookies as a meal, but the mini cookies at Jack in the Box are a low-sodium dessert option if the Apple Bites don’t quite cut it for your sweet tooth.

If you’re going to order a milkshake, you might as well know which one has the lowest sodium content.

Even though cheese is usually high in sodium, the New York Style Cheesecake comes in with only 260mg of sodium, making it a good low-sodium dessert choice.

You could have a plain side salad and a cheesecake for less than 300mg of sodium.

Similar to the mini cookies, the mini churros are a low-sodium dessert option.  There are a total of five churros in the order, so if you share them with four friends, you reduce your sodium content even more.

You can order one egg roll as a side at Jack in the Box, and this would be a low-sodium choice.  Pairing it with a side salad (especially with no dressing, or only half a packet of Low Fat Balsamic Dressing) would create a meal that is low in sodium.

While hashbrowns are not a complete meal on their own, they are a menu item that is lower in sodium, to help guide your breakfast choices at Jack in the Box.

The mini pancakes are another breakfast option that is low in sodium.  If you split the order in half (4 pieces), you could have 4 mini pancakes, hashbrowns and apple bites for 580mg of sodium, which is only just slightly higher than our recommendation of 500mg for a low sodium meal.

Serving the pancakes with grape jelly or strawberry instead of pancake syrup saves 20mg of sodium.

A dessert is not a balanced meal, but chocolate cake is a delicious dessert choice in moderation.  If you share the cake with a friend, you can cut the sodium content in half.

A regular taco at Jack in the Box has only 360mg of sodium.  This means that you can pair it with a side salad to create a low-sodium meal.

Adding half a serving of balsamic dressing brings the total to 545mg of sodium.

An order of French fries from the Value Menu has 410mg of sodium.  This is also the same serving size as the Kid’s French Fries.  Per my list of tips, you can reduce the sodium content further by asking for unsalted fries.  Also skip the ketchup to save more sodium.

The final menu item at Jack in the Box that has less than 500mg of sodium (other than beverages and condiments) is an order of Kid’s Seasoned Curly Fries.

This doesn’t make a balanced meal on its own, but it does show that getting a smaller size of fries with your meal can help you to reduce the sodium content.

As stated, most of the menu items at Jack in the Box are high in sodium.  All of the menu items other than the 15 items listed above have more than 500mg of sodium.  This includes all burgers, sandwiches, breakfast items and salads.

However, you can use my tips (above) to lessen the amount of sodium in any meal.  Remember that these tips were to skip the bun and the cheese (or swap for a lower-sodium cheese), choose lower-sodium condiments, get unsalted fries, and order from the kid’s menu.

The top ten highest-sodium items include:

As you can see, all of the “Munchie Meals” (available 9pm – 5am) are very high in sodium and should be avoided.

What Jack in the Box Menu Item Has The Least Amount of Sodium?

The Jack in the Box menu item with the least amount of sodium is a plain side salad which has 10mg of sodium.

How Much Sodium Is In A Jack in the Box Breakfast Jack?

A Jack in the Box Breakfast jack has 780mg of sodium.

How Much Sodium Is In A Jack in the Box Taco?

How Much Sodium Is In A Jack in the Box Egg Roll?

One Jack in the Box Egg Roll has 320mg of sodium.

How Much Sodium Is In A Jack in the Box Fish Sandwich?

A Jack in the Box Fish Sandwich has 900mg of sodium.

Ghost Protein Review: Is It Worth It? (I Bought & Tested It)