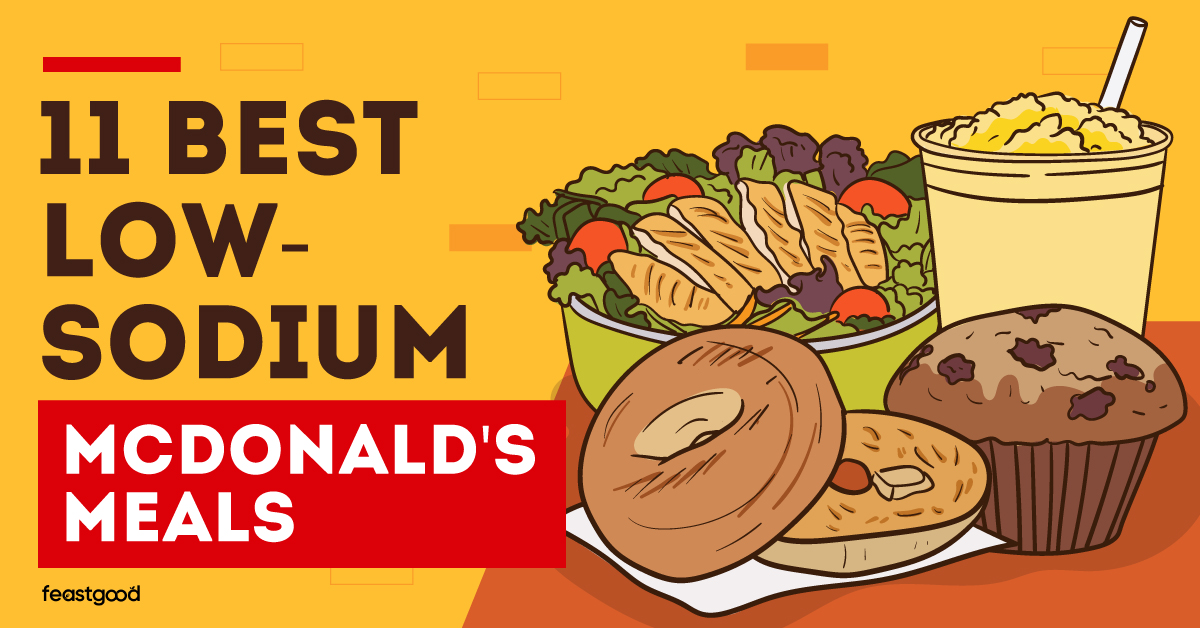 McDonald’s is a great convenient option for those who need meals on the go, but for those who are trying to reduce their sodium intake, some of the menu items aren’t ideal.

Fortunately, there are some items on the McDonald’s menu that can be considered low-sodium.

The 11 best low-sodium meals at McDonald’s are:

As a nutrition coach, I’ve studied the Mcdonald’s menu and have discovered ways you can customize your order to reduce the amount of sodium that a McDonald’s meal normally contains.

Is McDonald’s High In Sodium?

McDonald’s is generally higher in sodium because it’s a fast-food restaurant that uses processed foods and table salt, but some menu items are lower in sodium if you’re trying to keep your sodium intake low.

The recommended amount of sodium per day is 1200-1500mg, but the upper limit for daily sodium intake is 2300mg. These sodium recommendations are set to provide information to the public about how much sodium they should be consuming per day to reduce their risk of high blood pressure.

Ideally, you should aim for the recommended amount of sodium per day, but as long as your meal isn’t putting you over the upper limit, you could still eat McDonald’s without dramatically increasing your risk of high blood pressure.

What Is Considered Low-Sodium At McDonald’s?

McDonald’s has items on its menu that range from 5mg of sodium up to 1500mg, and that’s not even including any “meal deals” that pair a sandwich or nuggets with fries. It’s important to know what to look for if you’re trying to eat low-sodium.

Based on the recommended 1200-1500mg of sodium per day that I discussed above, a guideline set to help reduce the average population’s sodium intake, you can make assumptions about how much sodium to limit yourself to in one meal.

Most items on the McDonald’s menu that are below 500mg of sodium will be single menu items rather than “meal deals.” But don’t worry — there are some ways that you can improve your favorite menu items to make them lower in sodium.

Tips On Reducing Sodium At McDonald’s

To help reduce the amount of sodium per meal at McDonald’s, you can:

Change Up the Condiments

Condiments can account for a significant amount of sodium. By skipping the sauce, asking for it on the side, or choosing a lower sodium condiment, you can save on sodium while eating at McDonald’s.

McDonald’s sauces range from 65mg to 520mg of sodium per serving, with the lowest-sodium sauces being ketchup and mayo (75mg and 80mg, respectively) and the highest being mustard and buffalo sauce (230mg and 520mg, respectively).

If you aren’t crazy about sauce anyway, it may be worth skipping it. If you want sauce but still want to save on some sodium, opt for mayo or mustard.

If there’s a McDonald’s menu item that you love and you’re trying to reduce your sodium consumption, try downsizing so that your portion size is smaller and you’re consuming less sodium overall.

If you love McDonald’s french fries, try getting a mini or small fry, which can save you up to 300mg of sodium since a large fry has 400mg:

If you like Chicken McNuggets, go for the 4 or 6-piece nugget. A 20-piece serving has nearly 1700mg of sodium, and the smaller sizes have much less than that:

If you like a Big Mac, split it with a friend and pair it with a garden salad:

There are ways to enjoy your McDonald’s favorites without overdoing it on sodium as long as you’re willing to adjust your portion size.

Ask For It To Be Prepared Without Table Salt

A great way to reduce the sodium content at McDonald’s is to ask that your food be prepared without table salt.

A great example of this is the McDonald’s french fries which are normally salted after they’re cooked. If you ask for your fries to be made without salt, you can save on a significant amount of sodium (~250-300mg of sodium).

Additionally, in asking for your fries to be made without salt, you’ll always get the freshest fries because they’ll have to make them separately on the spot!

If you’re ordering a sandwich, wrap, or salad and you’re trying to reduce your sodium intake you should always choose the grilled chicken over the crispy chicken.

McDonald’s smoothies are the best meal items on the menu for low-sodium options because they have less than 65mg of sodium per serving and come in a variety of flavors.

Below is a chart showing the different smoothie flavors available at McDonald’s and the sodium content for each size.

If you’re looking for low-calorie beverages at Mcdonald’s, check out 10 NEW Low-Calorie Drinks At McDonald’s (2022).

The second-lowest sodium meal option on the McDonald’s menu is the side garden salad which only has 70mg of sodium. You can eat it alone or pair it with something else on the menu to make it more filling.

I would pair the side garden salad with another low-sodium side, aiming to keep your order under 500mg of total sodium.

The side garden salad is an excellent option to increase the amount of volume you’re eating without drastically increasing your sodium consumption.

The Fruit and Maple Oatmeal at McDonald’s is also lower in sodium with just 90mg per serving, making it a great breakfast option for those who are trying to reduce their sodium intake.

The Fruit and Maple Oatmeal is a hearty breakfast made with whole grain oats, cranberries, raisins, and red and green apples. It is served with a touch of cream and a pinch of brown sugar.

I would pair a serving of this oatmeal with a coffee for a satisfying low-sodium breakfast.

Another lower-sodium option you can get at McDonald’s is an English Muffin with Butter, which has 280mg of sodium per serving (225mg for the muffin, 55mg for the butter).

You could also change it up and ask for peanut butter (85mg per serving) or cream cheese (75mg) and still be under 500mg for your meal.

Many chicken nugget fans will be happy to hear that the 4- and 6-piece Chicken McNuggets are an option for those looking to keep their sodium intake low.

Although chicken nuggets are typically enjoyed with a generous side of french fries, there are some better side options if you want to keep your sodium intake low:

For those who want a more balanced meal at McDonald’s, the Asian sesame fusion salad with grilled chicken is a great low-sodium option with 340mg of sodium.

This salad has edamame, crunchy cashews, tender grilled chicken, and bell peppers served on a bed of kale with a sweet sesame dressing. This is the perfect option for those looking for a convenient, fresh, and low-sodium lunch or supper.

The only downside to this menu item is that it’s not available everywhere. It appears to be a regional menu item that is available in Canada but not in the US.

If you’re a Caesar salad lover, then the side Caesar salad is a great lower sodium option for you at McDonald’s, with only 400mg of sodium per serving.

This salad can easily be adjusted to be even lower in sodium by asking for the dressing on the side because it contains 250mg of sodium per 1 oz. By adding the dressing yourself you could cut back significantly on the amount of sodium in this salad.

If a side caesar isn’t enough on its own you could add apple slices for an extra 5mg of sodium or even a mini fry for 90mg of extra sodium, while still staying within the 500mg total.

Another McDonald’s meal option that is under 500mg of sodium is the McDonald’s French fries, which tend to be a fan favorite.

The values above are assuming that the fries are seasoned with table salt after cooking, but if you were to ask for unsalted french fries then you could cut back on the sodium content per serving.

If you only have the fries by themselves, you may want a larger serving and accept that it’s higher in sodium. But if you want to pair your fries with another menu item, it’s best to choose a smaller size fry with less sodium.

The McDonald’s Muffins are another low-sodium option for those who like muffins for breakfast or as an afternoon snack, as they have between 330mg to 460mg depending on the type of muffin.

Note that the available flavors may vary based on where you live.

A regular bagel with butter is also a lower sodium option from McDonald’s that you could have without going over the recommended 500mg of sodium per meal.

It should be noted that this isn’t listed as a menu item, but it’s available upon request.

The last McDonald’s menu item that you could have while trying to reduce your sodium intake is the Grilled Chicken Snack Wrap, which has between 440 to 490mg of sodium.

This snack wrap is made with a flour tortilla, chicken, shredded lettuce, Monterey jack cheese, and your choice of sauce: ranch, BBQ, or honey mustard. For the lowest amount of sodium, I recommend choosing the honey mustard sauce.

The meals that you should avoid at McDonald’s are meals that have more than 1000mg of sodium per serving because this is a very high amount of sodium for one meal.

The meals with more than 1000mg of sodium are listed below. Note that not all of these menu items are available anyway depending on where you live.

What McDonald’s Item Has the Least Amount of Sodium?

Can You Get No Salt At McDonald’s?

There isn’t anything at McDonald’s that is sodium-free, but there are some lower-sodium options to choose from if you’re trying to keep your sodium intake low.

How Much Sodium Is In McDonald’s Oatmeal?

McDonald’s Fruit and Maple Oatmeal has 90mg per serving, which is a low-sodium option for those trying to limit their sodium intake while eating at McDonald’s.

How Much Sodium Is In McDonald’s French Fries?

The sodium content of McDonald’s French fries depends on the serving size. The mini fry has 90mg of sodium, the small fry has 180mg, the medium fry has 260mg, and the large fry has 420mg.

How Much Sodium Is In McDonald’s Chicken Nuggets?

How Much Sodium Is In McDonald’s Fish Sandwich?

How Much Sodium Is In McDonald’s Cheeseburger?

How Much Sodium Is In McDonald’s Pancakes?

McDonald’s pancakes, known as “hotcakes,” have 660mg of sodium per serving, including the butter and syrup that are served along with the pancakes.

How Much Sodium Is In McDonald’s Big Mac?

McDonald’s does have some lower-sodium menu items that you could choose to keep your sodium intake within a healthier range, as long as you know what to order.

Should Beginners Take Creatine? Who SHOULD & Should NOT Use

1000 Calorie Deficit: Is It Healthy & How Much Can You Lose?