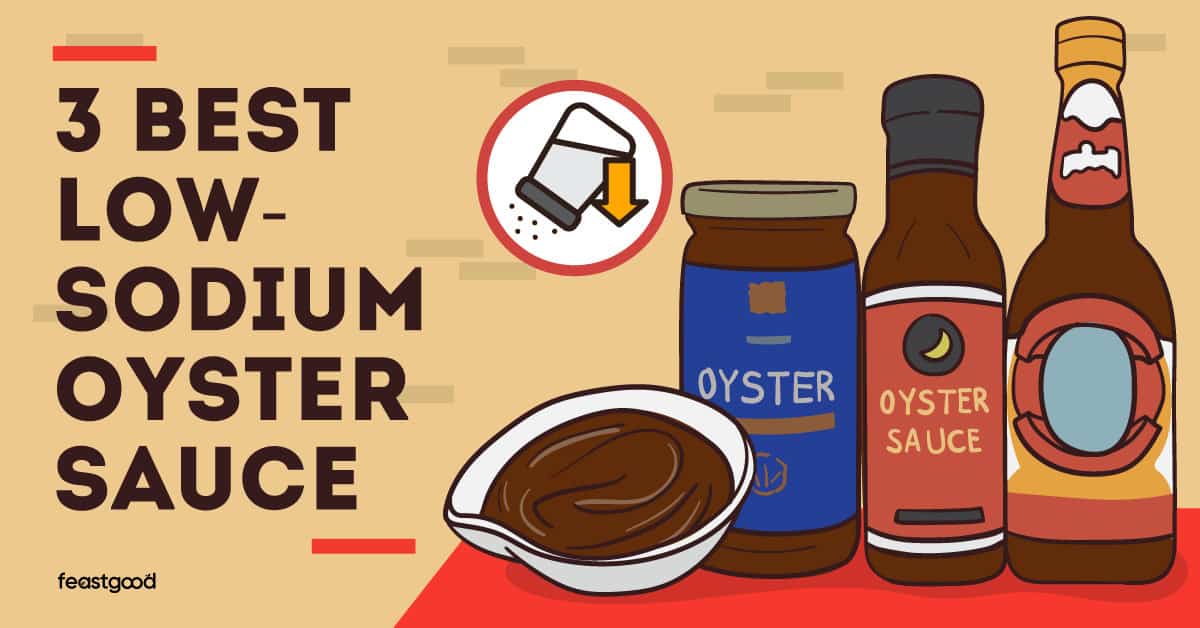 Asian-style sauces are known for their high sodium content. Such is the case with oyster sauce. If you are on a low-sodium diet, you might avoid these sauces. However, there are some options you can consume that won’t affect your sodium consumption for the day.

As a Registered Dietitian, it is my responsibility to teach my clients which oyster sauce they can include in a low-sodium diet.

However, before I tell you which oyster sauces you can add to your diet while still being mindful of your sodium intake, it is essential to know the guidelines for sodium consumption and what defines a low-sodium oyster sauce.

What Defines A “Low-Sodium” Oyster Sauce

While there is no specific recommendation for oyster sauce, according to the FDA, a product with less than 140 mg of sodium per serving can be considered low-sodium. It is considered moderate in sodium if it has between 140 and 400 mg.

On average, oyster sauce can have around 500-850 mg of sodium per tablespoon. This represents 20-35% of the recommended daily sodium intake of 2,300 mg. If you can balance out your sodium content from other foods so you stay within that limit when eating oyster sacue, perfect! If not, you need to get a low-sodium oyster sauce.

To be considered a low-sodium oyster sauce, it needs to have less than 500 mg of sodium per serving (15 mL).

Be careful about confusing foods classified as reduced in sodium as low-sodium foods. “Reduced sodium” doesn’t necessarily mean that they are low in sodium. They only contain 25% less sodium than the original product. For example, if the original product has 1,000 mg of sodium, the reduced-sodium version has 750 mg.

You can find the sodium content of oyster sauce at the back of the nutrition label. It is in most cases given in milligrams, although in some cases, you see it in grams.

Why You Should Buy Low-Sodium Oyster Sauce

Consuming too much sodium can lead to health conditions like high blood pressure.

With high blood pressure, your body must pump blood harder to reach your organs. The extra work your heart does can lead to heart disease and kidney problems.

Consuming high-sodium foods once in a while is not the problem. The problem arises when you consume more than 2,300 mg of sodium daily.

So, where does our sodium come from?

While natural, unprocessed foods have some sodium, over 70% of the sodium you consume comes from processed foods. Thus, you must be careful with the types you consume and the amount to ensure you stay within the guidelines.

June Moon Spice Company Oyster Sauce is the perfect option if you are trying to reduce your sodium intake since it only has 330 mg of sodium per serving.

It has sugar as its second ingredient, so you need to be careful with the amount you use. One serving (1 tablespoon) has 4 g of sugar. According to the WHO, the ideal daily sugar intake is 20-25 g. If you use more than one serving of this oyster sauce, you may want to cut back on other high-sugar foods so you don’t go over those guidelines.

Another excellent low-sodium option is the Gluten-Free Oyster Sauce from the Wok Mei brand. It has 340 mg of sodium per serving, which is up to 54% less than the amount of sodium in other oyster sauce brands.

It is great for those that need gluten-free options or are gluten intolerant. People allergic to gluten could have gastric issues such as stomach cramps and diarrhea from consuming gluten.

Thai Oyster Sauce from the Maekrau brand is another great product if you are looking to reduce your sodium intake. While it is on the higher end of low-sodium oyster sauces (500 mg per serving), it still offers less sodium compared to other brands that can have 750 mg of sodium or more per serving.

While it is made with sugar, it doesn’t have a significant amount. It offers 2 g per serving. Still, you need to keep track of the sugar content of other foods you eat in a day to avoid consuming more than you need.

Only one brand available on the market is classified as reduced in sodium. It cannot be placed into the low-sodium category since it is higher than the set recommendation.

The Lee Kum Kee Panda Brand Less Sodium Oyster Flavored Sauce is stated as reduced in sodium since it has 25% less sodium than the original product. The original version has 850 mg of sodium per serving, and the reduced version has 637 mg of sodium.

This is still more than the recommended amount of sodium for a low-sodium oyster sauce, so you will have to be mindful of how much sodium you’re consuming in your other meals if you use this product.

How To Replace Oyster Sauce and Lower Your Sodium Intake

For those looking to reduce their sodium intake, you can substitute the oyster sauce with other options. Here are some suggestions you can replace it with.

Remember that you need to check the sodium content in each one to ensure it has less than 500 mg of sodium per serving.

While it might not entirely replace the flavor of oyster sauce, fish sauce still offers a delicious umami flavor.

One of my favorite low-sodium brands is Ka’me Fish Sauce. It has 380 mg of sodium per serving (15 mL).

Coconut aminos can give you a soy sauce flavor with significantly reduced sodium content. Coconut Secret Coconut Aminos is an excellent option that is low in sodium.

In one serving (15 mL), you get 270 mg of sodium. It is also gluten-free and kosher certified.

Soy sauce isn’t as sweet or thick as oyster sauce, but it can give you a similar flavor. Premium Lite Soy Sauce Low Sodium is my favorite brand that is low in sodium.

Hoisin sauce is a delicious replacement that offers an umami flavor with a tangy and sweet aftertaste. You can easily replace it in any recipe that needs oyster sauce.

My favorite brand to use that is low in sodium is Premier Japan Organic Wheat Free Sauce Hoisin.

For those looking for a vegan or vegetarian substitution for oyster sauce, you can replace it with vegan mushroom sauce.

My favorite is Yondu Vegetable Umami. It offers an umami flavor without relying on animal sources.

Does oyster sauce have a lot of sodium?

Yes, oyster sauce is high in sodium. One tablespoon of oyster sauce (15 g) has 500-850 mg of sodium, representing 20-36% of the recommended daily sodium intake (2,300 mg). While it’s okay to have it once in a while, make sure to compensate by reducing other high sodium foods throughout the day.

Other Low-Sodium Sauces and Seasonings

Halibut vs. Flounder: 5 Differences & Which Is Better?

Carb Cycling vs Intermittent Fasting: Which Is Better? (3 Differences)