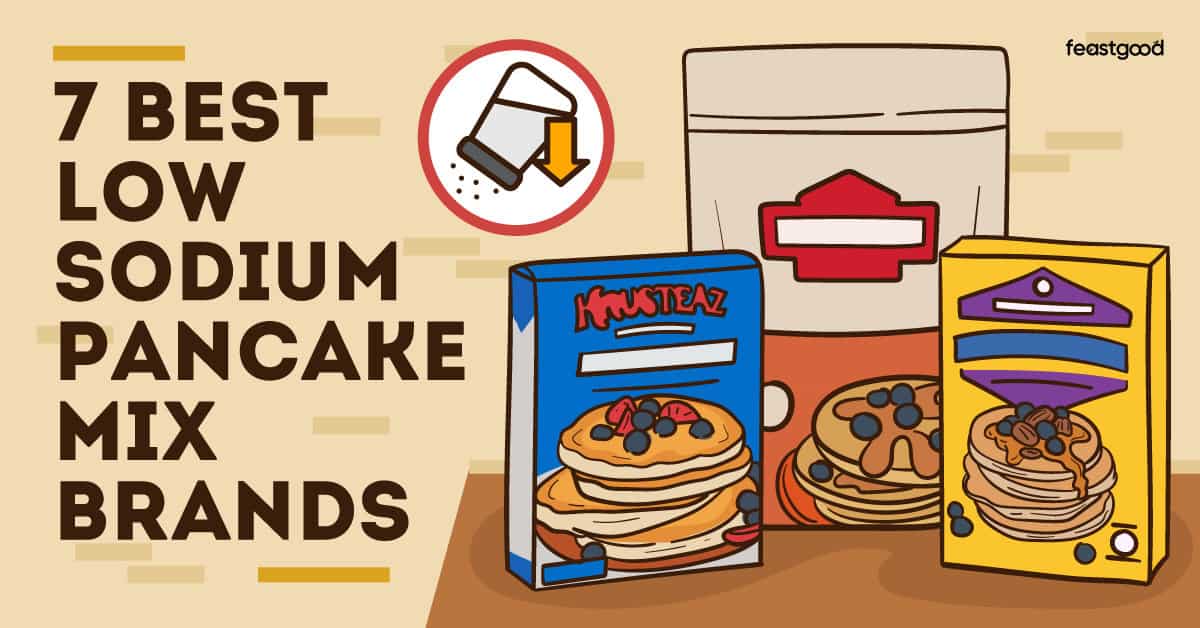 There are now pancake mixes available that are lower in sodium for those who are trying to reduce their sodium intake, but not all of these low sodium pancake mixes are created equal in their taste, fluffiness, and nutritional benefits.

In this article, I’m going to cover these brands in more detail so you can continue to enjoy your favorite breakfast food without overdoing your sodium intake.

What Are the Guidelines for Sodium Consumption?

The World Health Organization recommends that you limit your sodium intake to 2 grams (2,000 mg) of sodium per day.

According to the Centers for Disease Control and Prevention, 90% of Americans consume more than the recommended daily amount of sodium.

The average American adult consumes around 3,400 mg of sodium a day.

Most pancake mixes contain between 600 and 700 mg of sodium per serving (¼ cup of dry mix). Anything that contains 360 mg of sodium or less per ¼ cup serving can be referred to as low sodium.

For example, if the low sodium pancake mix has 290 mg of sodium per ¼ cup but you’re using 1 cup of mix, then the sodium content of the pancakes would actually be 1160mg of sodium, which would no longer be low sodium.

The Nature’s Promise Pancake & Waffle Mix is the best low sodium pancake mix because it has 320 mg of sodium per ½ cup serving, which is a larger serving size for less sodium compared to other pancake mixes on the market.

Another benefit of this low sodium mix is that it  provides 45% of your daily vitamin D requirements. Vitamin D plays an important role in your bone health, immune health, and helping to reduce inflammation.

Another low sodium pancake mix is Arrowhead Mills’ Gluten-Free Pancake Mix, which has 290mg of sodium per ¼ cup (46 grams) and is the best option for those who need gluten-free products.

This pancake mix is made with organic white rice flour and organic potato starch, which gives it a fluffy texture that you don’t always get with a gluten-free pancake mix.

Bob’s Red Mill Organic Whole Grain Pancake & Waffle Mix is another delicious low sodium option with only 300mg per serving, which is perfect for those who want to lower their sodium intake.

This low sodium pancake mix is made with whole wheat flour and whole grain rye, which makes this product  higher in fiber. A higher fiber content is beneficial because an adequate fiber intake is important for supporting healthy digestion.

It also  provides 10% of the recommended daily iron requirements, making it a great option for those who are vegan or vegetarian because these individuals may struggle to get enough iron from other food sources.

The Krusteaz Buttermilk Pancake Mix is a great low in sodium pancake mix because it has 330mg of sodium in a ¼ cup serving, it’s loaded with nutrients, and it makes the fluffiest pancakes.

The Krusteaz Mix is made with enriched bleached flour and  contains a variety of nutrients that your body needs to function optimally, such as niacin, riboflavin, and folic acid.

Bob’s Red Mill Homestyle Pancake Mix has 330 mg of sodium per ¼ cup serving. It also has 6% of each of your daily calcium and iron needs.

Bob’s Red Mill Homestyle Pancake mix is in fifth place despite having the same amount of sodium per serving as the Krusteaz mix because it has fewer nutrients and is less fluffy than the Krusteaz pancake mix.

The Bisquick Gluten Free Pancake & Baking Mix is another great low sodium pancake mix with  340 mg of sodium per ¼ cup, which is below the recommended sodium threshold.

Another benefit of the Bisquick mix is that it’s made with rice flour, which is high in dietary fiber. It’s also a gluten-free grain, making it appropriate for those with gluten intolerance or celiac disease.

The last low sodium pancake mix that I would recommend is the Arrowhead Mills Natural Buttermilk Pancake and Waffle Mix, which has 360mg of sodium per ¼ cup serving.

This Arrowhead Mills mix is the upper limit for what would be considered a low sodium mix, so it’s important to stick to the ¼ cup serving size if you’re trying to reduce your sodium intake.

There is an impressive 15% of your daily calcium needs, 5 grams of protein, and only 1 gram of fat in each ¼ cup serving. If you want to add extra protein to your pancakes, stir some protein powder into the mixture.

The pancake mix brands to avoid are those that have more than 380 mg of sodium per serving because these mixes could put you over the daily upper limit for sodium consumption, especially if you’re having more than one serving.

The Birch Benders Paleo Pancake and Waffle Mix should be avoided because it’s higher in sodium with 388 mg per ¼ cup, which is over the recommended amount of 360mg per serving.

The Hungry Jack Extra Light & Fluffy Pancake & Waffle Mix is relatively high in sodium with 435 mg of sodium per serving, so it should be avoided by those who want to reduce their sodium intake.

If you were to consume 2 servings of this mix, which is still only ½ cup of dry mix, then you would be having 870 mg of sodium from the pancakes alone.

The most important pancake mix to avoid is the Birch Benders Organic Confetti Just-Add-Water Pancake & Waffle Mix because it’s the highest on the list with 470 mg of sodium in each serving.

Although this pancake mix is absolutely delicious, I recommend avoiding this one if you’re trying to cut back on your sodium and choosing any of the other options listed above.

Is Pancake Mix High In Sodium?

Is Salt Necessary In Pancakes?

No, salt is not necessary for pancakes. Its main function is to enhance the flavor of the pancakes and to balance out the sweetness but it’s not required to get a fluffy texture.

How Many Calories Should You Eat When Carb Cycling?