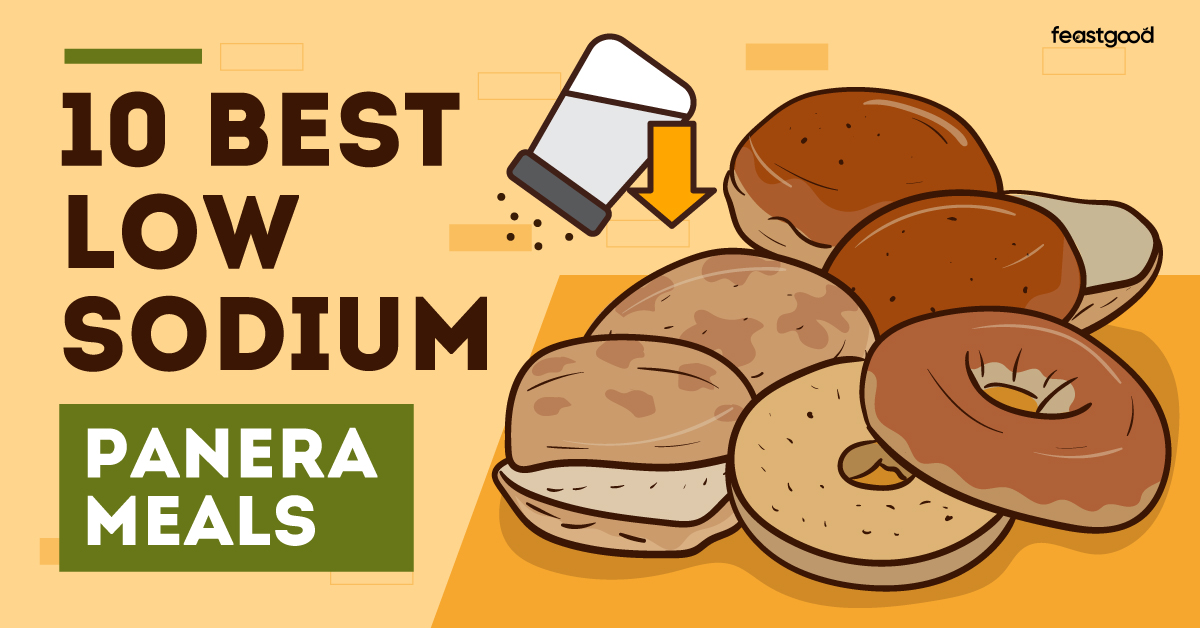 While Panera Bread is a healthier alternative for the fast-food industry, many of its menu items are also extremely high in sodium.  With that said, there are still a few items that I would recommend if you’re on a low sodium diet.

The best low sodium meals at Panera are:

If you’re trying to reduce your sodium consumption while eating at Panera, it’s important to know what to order and how to customize it, and what to stay away from.

Is Panera High In Sodium?

Panera is one of the lower sodium fast food restaurants because it has numerous low sodium options available.  However, there are still many options on the menu that are extremely high in sodium and ought to be avoided.

For this reason, it’s important to be mindful when ordering at Panera if your goal is to reduce your sodium intake.

What Is Considered Low Sodium At Panera?

Meals at Panera that are considered low sodium are those that have less than 500mg of sodium or less per serving.

This 500mg guideline is based on research that has recommended that an appropriate sodium intake is between 1200-1500mg per day.

If you’re having three meals per day, then ideally each meal would have between 400-500mg of sodium and still be considered low sodium.

Tips On Reducing Sodium At Panera

To reduce your sodium intake at Panera, you can:

To reduce your sodium consumption while eating at Panera, you can reduce your serving size by ordering a smaller size or splitting a menu item with someone else.

If you can reduce the amount of food that you’re eating from Panera, then you’ll naturally consume less sodium.

Panera’s soup is high in sodium (720-1070mg per cup) so if you were to eat that by yourself, then it would be too much sodium but if you split it with someone else then you’re cutting down on sodium by approximately half.

Normally I would also say that you could order from the Kids menu; however, Panera kids menu is limited and doesn’t have great options other than for sides (fruit pouches, squeezable yogurts).

To reduce your sodium consumption at Panera you should skip the bread bowl because having your food served in a bread bowl dramatically increases the sodium content of your meal.

Although the bread bowl is delicious, it’s not worth it if you’re trying to limit your sodium intake while eating at Panera because the bowl itself has 1050mg of sodium.

At Panera the biggest sources of sodium other than the bread bowls, are the cheese and processed meats that they use to add flavor to their meals.

The menu items that are the highest in sodium at Panera are those that have both cheese and processed meats because these foods are very high in sodium on their own.

Options like the flatbread pizzas with sausage and bacon, or sandwiches with cheese and bacon won’t be the best options.

Instead, it’s best to choose options that don’t have these high sodium foods or ask that a menu item be served without them because they will dramatically increase your sodium consumption.

Ask For Condiments or Dressings On The Side

Another way to reduce your sodium consumption at Panera is to ask for condiments or dressing on the side so that you can control how much of these high sodium spreads/sauces/dressings that you’re consuming.

Some common condiments at Panera are:

The condiments at Panera can add even more sodium to your meal than you might expect so it’s important to be in control over how much is being added.

At Panera, the menu items that are considered low in sodium are breakfast items, snacks, and sides. The meal options like soups, flatbread, large salads, and sandwiches are all high in sodium.

The lowest sodium menu items at Panera are apples, bananas, and their fruit cup which all have 0mg of sodium.

The fruit at Panera could be a great option to have as a side to keep sodium low and to add nutrients to your meal.

You could have fruit with a muffin or with a bagel and still be under the 500mg guideline for sodium.

Another low sodium menu item at Panera is their Greek Yogurt & Mixed Berry bowl which only has 80mg of sodium.

The yogurt & berry combo is a fantastic option for breakfast or an afternoon snack because it’s a great source of protein and fiber that will keep you full.

One of my favorite low sodium options from Panera is their smoothies because they taste phenomenal and they’re all low in sodium.

Another bonus with these smoothies is that they’re made with real fruit for a nutrient boost and almost all of them are made with greek yogurt which boosts the protein content of the smoothie.

A great low sodium breakfast item at Panera is their steel-cut oatmeal which only has 150mg of sodium per serving.

The steel-cut oatmeal is served with strawberries, pecans and a cinnamon crunch topping to give it a nice crunch factor.

Panera is known for its bread, and one of the lower sodium grain products that they carry is their whole-grain lavash bread which has 250mg per serving.

Although you probably aren’t going to the lahvash on its own, it’s low enough in sodium that you can customize a sandwich order with it.

The brioche roll from Panera is another low sodium menu item that you could order to keep your sodium intake low because the brioche roll has 300mg of sodium.

I would get the brioche and pair it with a fruit option (apple, banana, fruit cup) for a quick snack, or use it as a breakfast sandwich by asking for it to be split in half and served with an over-easy egg.

Many of Panera’s Bagels are also low in sodium, which makes them the perfect option for those monitoring their sodium consumption.

Keep in mind that the sodium content listed above is only for the bagel itself and doesn’t factor in any spread that you may want to add.

Panera’s butter appears to be only 35mg of sodium for “one pat” but they aren’t specific about how much “one pat” actually is.

Another low sodium bread option at Panera is the Artisan Ciabatta, which has 360mg of sodium per serving.

The artisan ciabatta could be eaten on its own with some butter (35mg of sodium) or made into a breakfast sandwich with an over-easy egg (70mg) or egg whites (100mg).

Panera also has a great selection of muffins that are all lower in sodium for those who are trying to reduce their sodium consumption.

These muffins would be a great grab-and-go breakfast, or an afternoon snack to hold you over until suppertime. I would pair the muffin with fruit for some additional fiber and micronutrients.

Lately, Panera has multiple salads on their menu that are low enough in sodium to be appropriate for those monitoring their sodium intake.

This nutritional information does include the salad dressing, so if you ordered the dressing on the side instead of letting them add it for you, then you may be able to reduce the sodium content of these salads further.

The meals to avoid at Panera are those that have 2000mg of sodium or more because these are very high sodium meals.

The meals at Panera that are 2000mg or higher are:

What Panera Item Has The Least Amount of Sodium?

The lowest sodium Panera items are apples, bananas, and fruit cups because they have 0mg of sodium. These side options are great for anyone trying to reduce their sodium consumption.

Does Panera Bread Have Low Sodium Soup? (mention the top 3)

No, Panera doesn’t have soups that are low in sodium but the soups that they do have that are lowest in sodium are a cup-size serving of ten vegetable soup (730mg), tomato soup (750mg), and thai chicken soup (820mg).