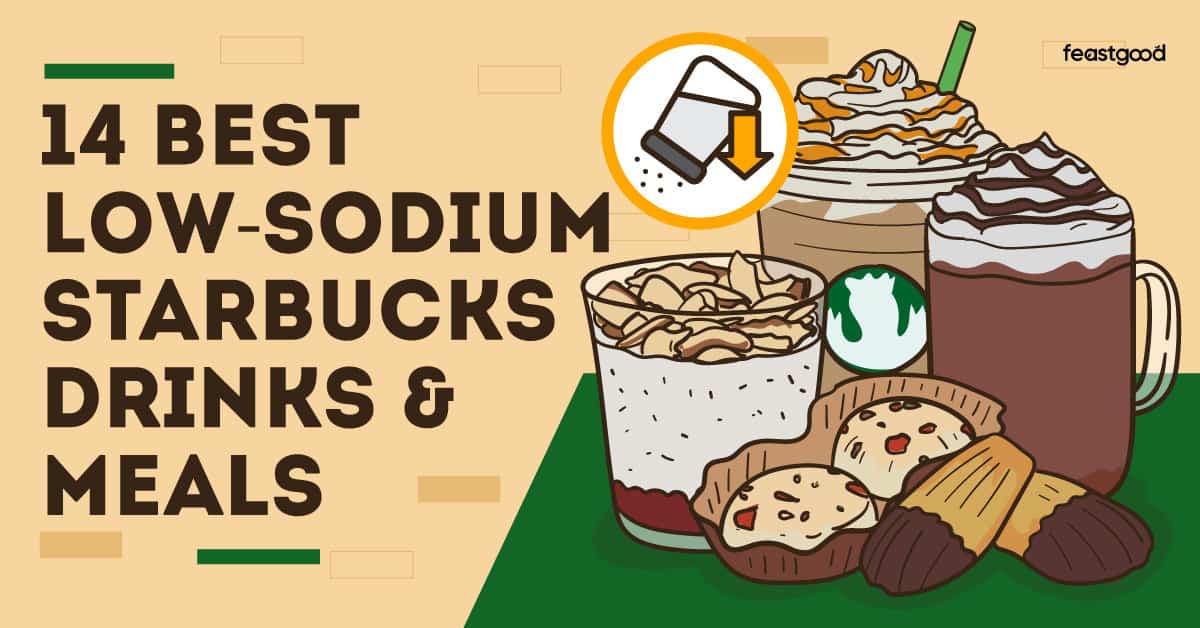 Starbucks is one of my favorite places to stop when I’m on a road trip, but I had no idea how much sodium its meals and drinks had until I did my research.

Now that I’ve examined its menu, I can confidently say which menu items are great low-sodium options.

The best low-sodium drinks and meals at Starbucks are:

To help you find a low-sodium menu item from Starbucks that you’ll enjoy, I’ve laid out all the meal options and drink flavors that will help you reduce your sodium intake. I’ve also explained how to customize your order to lower your sodium intake even further.

Is Starbucks High In Sodium?

There are still menu items at Starbucks that contain a lot of sodium, but most of its menu items have low to moderate amounts of sodium. This makes it a great fast food option for those trying to lower their sodium intake.

Other fast food restaurants that are good options for low-sodium meals are:

What Is Considered Low-Sodium at Starbucks?

Menu items that are considered low in sodium at Starbucks are those that have less than 500mg of sodium per serving. This recommendation is based on the recommended amount of sodium per day of 2300mg per day for healthy adults or 1200 to 1500mg for those trying to reduce their sodium consumption.

If you’re having three meals per day (as most people do), then based on the daily recommendation of 1200 to 1500mg of sodium when trying to lower your sodium intake, each meal should have between 400 to 500mg of sodium.

If one of your meals is higher than 500mg of sodium, your other meals of the day would have to contain even less sodium for you to meet the daily recommendation of 1200 to 1500mg.

Considering that many foods naturally contain sodium, it could be difficult to stay within the daily recommendation if you’re overdoing it in one meal.

Tips To Reduce Sodium at Starbucks

Although most items at Starbucks are considered low in sodium, if you want to reduce your sodium intake further, you should do the following:

To reduce your sodium intake further at Starbucks, order a tall (small) or a grande (medium) rather than a venti (large) or a trenta (extra-large).

You can still get your Starbucks fix but save potentially hundreds of milligrams of sodium just by ordering a smaller drink.

Another tip is to order tea-based like regular tea, iced tea, and refreshers over coffee-based drinks like lattes and frappuccinos.

For example, a grande Matcha Tea Latte has 120mg of sodium, while a grande Matcha Lemonade only has 15mg of sodium. You can reduce your sodium consumption by hundreds of milligrams by ordering a different type of drink that still has some similar flavors.

If you want food rather than a drink from Starbucks it’s best to avoid the baked goods and opt for egg bites, overnight grains, oatmeal, or protein boxes instead.

This list consists of Starbucks signature meals and drinks, so it doesn’t include basic items like regular coffee, Americanos, or hot tea. But all of these options will also be low in sodium as they naturally are sodium-free.

Starbucks’ Iced Teas are a low-sodium menu option with only 5 to 30mg of sodium per serving, depending on the flavor and size you order.

Although an iced tea won’t keep you full, it’s perfect for an afternoon energy boost on a hot day.

Another low-sodium option from Starbucks is its cold brew coffees, which have between 10 to 390mg of sodium, depending on the flavor and size you choose.

The lowest sodium flavor is the plain cold brew with no added flavor, which has up to 25mg of sodium.

The highest is the salted caramel with 390mg. As a rule of thumb, anything that has “salted” in the title is probably high in sodium.

Starbucks’ shaken espresso is also low in sodium and perfect for those cold coffee lovers who need a caffeine boost. The shaken espresso has between 0 to 105mg of sodium, making it an excellent option for those trying to reduce their sodium intake.

If you’re looking for a caffeine-free low-sodium drink from Starbucks, Hot Chocolate is the way to go, ranging from 105 to 330mg of sodium.

I would pair a tall-size hot chocolate (105mg) with the chocolate-dipped madeleine (100mg) for a sweet treat with only 205mg of sodium in total.

All Starbucks latte flavors and sizes are low in sodium, with between 50 to 340mg, depending on the flavor and size you choose.

Grabbing a latte to start your day or as an afternoon caffeine boost won’t skyrocket your sodium intake. But if you’re pairing it with food, you should ensure the combo of latte and food isn’t too high in sodium (ideally < 500mg).

Starbucks’ Strawberry Overnight Grains are its version of overnight oatmeal, which is a fantastic option for those reducing their sodium intake because it only has 15mg per 155g serving.

These overnight grains are a great low-sodium grab-and-go breakfast option that also tastes good. The Strawberry Overnight Grains contain oatmeal and strawberries with coconut and almonds for some added texture.

Frappuccinos are frozen blended drinks with caffeine, flavor, and ice. They are typically topped with whipped cream. They are definitely a dessert-style coffee, but they’re also low enough in sodium to be considered a low-sodium option.

All flavors and sizes of frappuccinos are low in sodium, with between 160mg and 380mg of sodium.

Starbucks Refreshers are another low-sodium option with between 10 to 125mg of sodium, depending on the flavor and size you order.

Starbucks’ plain madeleines and chocolate-dipped madeleines have 120mg and 100mg of sodium, respectively, making them low-sodium options for those looking for a sweet treat to curb their sweet tooth.

The madeleines would pair well with a coffee for an afternoon pick-me-up or as a morning snack to hold you over until lunchtime.

The Berry Trio Parfait from Starbucks is a great breakfast or snack option with only 125mg of sodium per serving (164g container). This parfait has 14 grams of protein to help curb cravings and keep you full until your next meal or snack.

Another low-sodium option from Starbucks is the Rolled & Steel Cut Oatmeal, which only has 140mg per 100g serving of oatmeal.

The oatmeal is a great breakfast option with 7 grams of fiber and 8 grams of protein to help keep you full for longer.

It also tastes great because it’s served with dried fruit, a nut medley, and brown sugar that help to enhance its flavor.

One exciting low-sodium option from Starbucks is the Eggs & Cheddar Protein Box, jam-packed with protein-rich ingredients to help you meet your protein goals and keep you full for longer.

I love that this box has less than 500mg of sodium (470mg), making it a low-sodium option that contains tons of nutrients, which is rare in a fast-food restaurant.

If you’re in the mood for a baked good but want to keep your sodium intake low, you’re in luck because 14 of Starbucks’ baked goods are low in sodium. Starbucks baked goods range from 95 to 490mg of sodium.

The meals to avoid at Starbucks are those with more than 1000mg of sodium because this is a very high sodium intake for a single food item.

Surprisingly, Starbucks doesn’t have any menu items that are extremely high in sodium. This is rare, considering most fast food restaurants have many menu items with over 1500mg of sodium (especially Burger King).

The meals and drinks to avoid at Starbucks when trying to watch your sodium intake are:

How Much Sodium Is in a Starbucks Latte?

How Much Sodium Is in a Starbucks Frappuccino?

Dirty Bulking For A Week: How To Structure + What To Expect

9 Best Places To Buy Protein Powder Online (And The WORST)