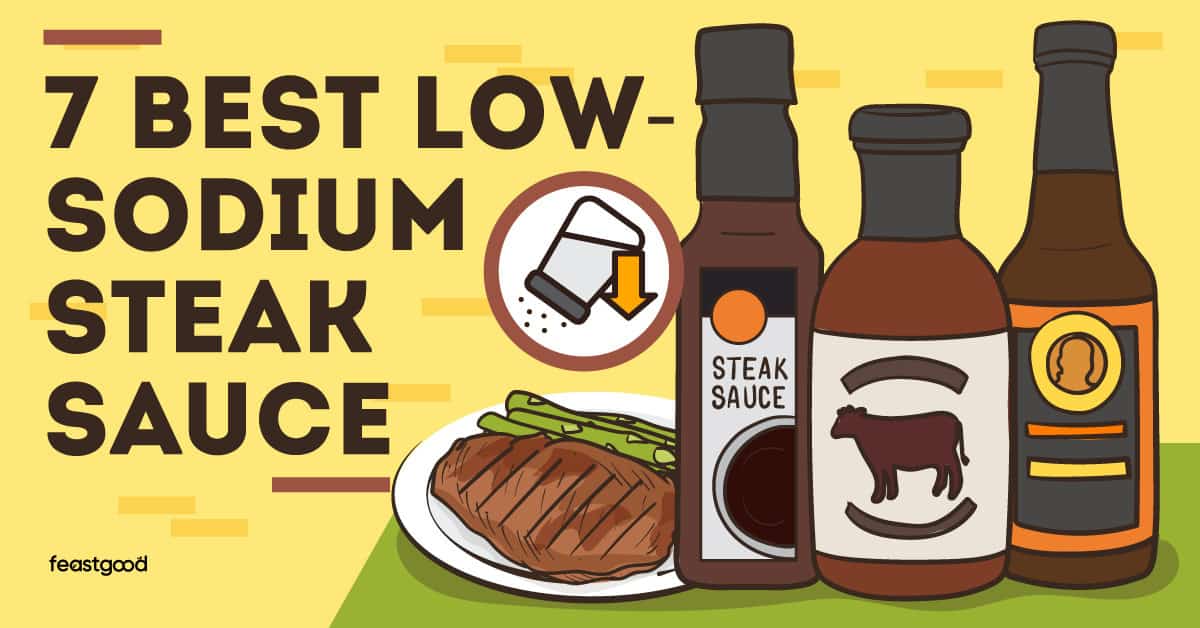 While there are no brands of steak sauce specifically classified as “low in sodium,” some brands have lower sodium contents than others.

As a Registered Dietitian, I have several clients that need to lower their sodium intake, and so I wanted to create a list of steak sauces that I approve of when prescribing a low sodium diet.

The best low-sodium steak sauces are:

The #1 steak sauce on this list only has 4mg of sodium per tablespoon, but each product has its pros and cons, which I’ll cover below.  I’ll also give you a few homemade recipes, which are lower in sodium than most store-bought options.

What Defines a “Low-Sodium” Steak Sauce?

Most steak sauces have, on average, 300 to 500 mg of sodium per serving, making them very high in sodium.

While there is no guideline to determine how much sodium steak sauce has to be defined as “low sodium,” any sauce that has less than 300 mg per serving (one tablespoon) is considered low sodium in this article.

Keep in mind that this is for one serving. If you have more than one serving, you are consuming more sodium than what’s stated on the food label.

Check out How Much Sodium Is A Low Sodium Diet?

Mr. Spice Organic Garlic Steak Sauce is the best low-sodium steak sauce available on the market. It is classified as “salt-free” since one tablespoon of this sauce offers only 4 mg of sodium.

It is also very low in calories since it has only 20 kcal per serving size.

One of the things I like about this sauce is that it contains apple cider vinegar as its second ingredient.

Preventing your sugar levels from spiking can help you avoid constant sugar crashes and cravings.

However, it’s important to note that to obtain 1 tablespoon of apple cider vinegar from this product, you would need to have around 3 tablespoons of the steak sauce.

G Hughes Sugar-Free Steak Sauce is another excellent low-sodium option. One tablespoon of this sauce has 150 mg of sodium.

It is lower in calories compared to the Mr. Spice Organic Garlic Steak Sauce since it only has 5 kcal per serving size. This makes it an ideal option for those looking to cut back on their calories for weight loss.

It’s made with tomato and plum puree, which has a sweet flavor that pairs nicely with steak.

Finally, since it doesn’t have any added sugar, it’s an ideal option for people who need to cut down on their sugar intake, like people with diabetes.

Braswell’s Vidalia Onion Steak Sauce is another great option when you are looking to cut back on your sodium intake. One tablespoon of this sauce has 160 mg of sodium.

It has an umami flavor thanks to the onion and Worcestershire sauce.

The sauce is also low in calories since it only has 20 kcal per serving, but it contains added sugars. One serving has around 4 g, the same as having one teaspoon of sugar.

While it is not a lot, you might want to consume it in moderation to avoid increasing sugar consumption.

The Organic Steak Sauce Organic 365 Whole Foods Market is an excellent low-sodium sauce that contains all organic ingredients. It only has 170 mg of sodium per serving (one tablespoon).

Even though it has a long list of ingredients, most of them are things you can understand and buy individually from any food store.

It is also low in calories since it has only 10 kcal per serving. However, it has less than 1 g of added sugars, making it an ideal option for those looking to reduce their sugar consumption.

Steak and Chop Sauce by London Pub is a good option that is lower in sodium compared to other brands. It has 190 mg of sodium per serving.

One of the things I like about this sauce is that it contains ginger puree. It gives it a different flavor, but ginger is also beneficial for digestive health.

Research shows that it can promote better digestion and reduce the symptoms of nausea and vomiting.

Crystal Steak Sauce is another good option to have. While it has more sodium than other brands (like Mr. Spice Organic and G Hughes), it still has a sodium content below 300 mg.

One serving of this sauce has 220 mg of sodium. In this case, since it has a higher sodium content compared to others, you need to be careful with how many portions you use to flavor your meat.

However, it is low in calories, with only 15 kcal per serving size.

Finally, the Happy Belly Steak Sauce by Amazon is another great low-sodium steak sauce that can help you reduce your sodium intake. It has 260 mg of sodium per serving.

Even though it has sugar, it only has 10 kcal per serving and only 1 g of added sugars.

Should You Make Your Own Low-Sodium Steak Sauce?

Creating your own low-sodium steak sauce is an excellent way to reduce your sodium intake when you cannot find one you like in grocery stores.

Here are the benefits of creating your own low-sodium steak sauce:

One of the main reasons to make steak sauce at home is because you can control the amount of sodium it contains.

You can choose the ingredients you like with the least sodium.

For example, if your recipe calls for soy sauce, you can use reduced-sodium soy sauce instead to cut back on the sodium content. If you need to season it to taste, you can reduce the amount of salt you decide to use.

Depending on the brand, steak sauce might be expensive to purchase. You can get local products to reduce the cost of the sauce when you make it at home.

On average, a bottle of store-bought steak sauce costs around $7 to $10.

However, depending on where you buy each of your ingredients, the homemade sauce can cost just $3 to $5 to make.

3. Adjust It to Your Liking

Finally, one of the benefits of making your steak sauce at home is adding the spices and ingredients of your liking.

Maybe you like it to taste more like garlic, ginger, or any other spice of your choice.

Including your favorite ingredients can make the meal more appealing and help you stay within your goals.

If you are interested in making homemade steak sauce, here are some of my favorite recipes for you to try. They have the best quality ingredients and are packed with flavor to spice up your meat.

This means you can save up to 85 mg of sodium per serving by using a homemade steak sauce, depending on the recipe.

You may even be able to reduce the sodium content further by cutting back on any added salt and choosing low-sodium versions of ingredients like ketchup.

Chicken Thighs vs Breast: 4 Differences & Which Is Healthier?