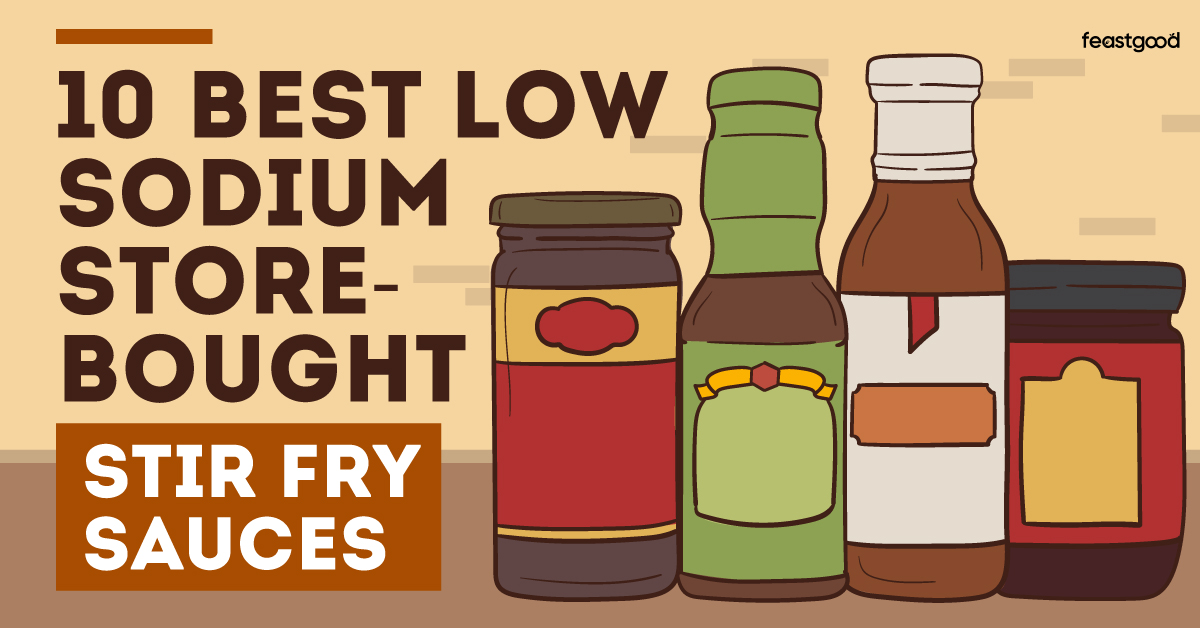 Many great low sodium stir fry sauces are available in stores and online. In this article, I’m going to cover the best 10 options for you.

Before we dive into the best low sodium stir fry sauces, I want to cover the general guidelines for sodium consumption and what the term ‘low sodium’ actually means.

What Are the Guidelines For Sodium Consumption?

Sodium is an essential mineral that your body needs to regulate blood pressure and blood volume. It also plays a key role in the transmission of nerve impulses throughout the body. As important as it is to regularly consume sodium in your diet, consuming too much of it can negatively impact your health.

According to the Institute of Medicine, you should consume no more than 2.3 g (2,300 mg) of sodium each day. The World Health Organization (WHO) suggests a lower daily recommended intake of 1.5 g (1,500 mg) or less each day to maintain healthy blood pressure and lower the risk of heart disease.

Try not to get the terms ‘low sodium’ and ‘reduced sodium’ mixed up. A reduced-sodium product contains 25% less sodium per serving than the standard version of the product. Unlike a low sodium stir fry sauce, a reduced-sodium sauce might not be appropriate for those of you who are trying to reduce your sodium intake, as it could still contain more than the recommended 400 mg of sodium per serving.

Why You Should Buy Low Sodium Stir Fry Sauces?

Most adults in America consume much more than the recommended daily allowance of sodium. The average sodium consumption is around 3.4 g (3,400 mg) a day, which is more than double the recommendations from the WHO.

Chronic excessive sodium intake is associated with a range of health conditions, such as high blood pressure, heart problems, swelling, and damage to the kidneys, eyes, and brain. Some stir fry sauces can be high in sodium, so it’s important to reach for low-sodium options if you are trying to cut back on your daily sodium intake.

The first low sodium stir fry sauce is the Organic Asian Fusion Teriyaki Sauce, which contains just 25 calories and 125 mg of sodium per serving. It is made with a blend of tamari soy sauce, ginger, and sesame seeds.

Ginger is a known anti-inflammatory and antioxidant that protects your cells from damage. Sesame seeds are a great source of calcium and manganese, which are both essential for maintaining healthy bones.

Every 1 tbsp serving of the Kikkoman Original Stir Fry Sauce contains 190 mg but adds lots of flavor to your meal.

It is made with a blend of soy sauce, oyster sauce, and Asian seasoning and contains no preservatives, which have been shown to negatively impact the body by causing allergies, neurological damage, cancer, and other health conditions.

Each 1 tbsp serving of the Dynasty Hoisin Sauce contains 205 mg and 25 calories. It is made using soybean, which is high in fiber, antioxidants, and omega-3 fatty acids.

Antioxidants reduce stress in your cells, and omega-3 fatty acids have a range of cardioprotective (heart-protecting) effects.

For a sweet and spicy addition to your meals, the Private Selection Kung Pao Stir Fry Sauce is a great option. It’s low in sodium, with 212 mg per 1 tbsp serving, and is made primarily from soybeans, which are high in plant-based protein.

Protein is essential for maintaining skeletal muscle mass and keeping your hair, nails, and skin healthy.

Considering the House of Tsang General Tso Stir-Fry Sauce is made primarily using soy sauce, which is known to be high in sodium, it contains just 230 mg of sodium per serving.

It has a spicy finish with authentic Asian flavors such as soy sauce and garlic that will complement any stir fry ingredients.

The Minor’s Ready To Use Stir Fry Sauce contains a blend of soy sauce, sherry, Worcestershire sauce, and other seasonings and provides 235 mg per 1 tbsp serving.

If you want to add flavor to your dishes without making them too spicy, the Private Selection Spicy Hunan Style Stir Fry Sauce is the perfect option. It combines garlic, ginger, and mild spices to create a delicious stir fry sauce.

Garlic has been shown to reduce the risk of a range of diseases, including cardiovascular and metabolic disorders, high blood pressure, and type 2 diabetes.

The P.F. Chang’s Home Menu Sesame Sauce is made using brown sugar, soy sauce, and sesame oil. It has a tangy finish that complements your dishes and adds lots of extra flavor. It’s perfect to use in stir fry and pasta dishes, as a meat marinade, or as a dip.

Sesame oil is packed full of antioxidants (such as vitamin E and phytosterols) that reduce the stress inside your cells and protect them by neutralizing oxygen free radicals, which are oxygen atoms that can attack and damage proteins and structures in the cells.

The Coconut Secret Coconut Aminos Low Sodium Soy Sauce Alternative contains 73% less sodium than traditional soy sauce. It is USDA organic and gluten-free. You can use it on its own or with other common ingredients in Asian dishes such as chili paste, ginger, and garlic.

This product is made from the sap of coconut blossoms, which mimics the flavor of traditional soy products. Despite the name of the product, it does not taste like coconuts!

It is made with sun-dried sea salt, which is a minimally-processed form of salt that has lots of health benefits. Sun-dried sea salt can reduce skin irritation, help you to stay hydrated, and improve digestion.

The Thai Kitchen Gluten-Free Pad Thai Sauce is sweet and tangy and can be used in almost any dish. Whether you want to use it for a veggie stir fry, noodle dish, or large salad, it will add a taste of authentic Thai cuisine.

This product is made with rice vinegar and is gluten-free. Rice vinegar is a fermented product that contains antioxidant and anti-inflammatory compounds. It can also improve gut health and is beneficial for the skin and immune system.

Should You Eat More On Leg Day? (What To Eat On Leg Day)