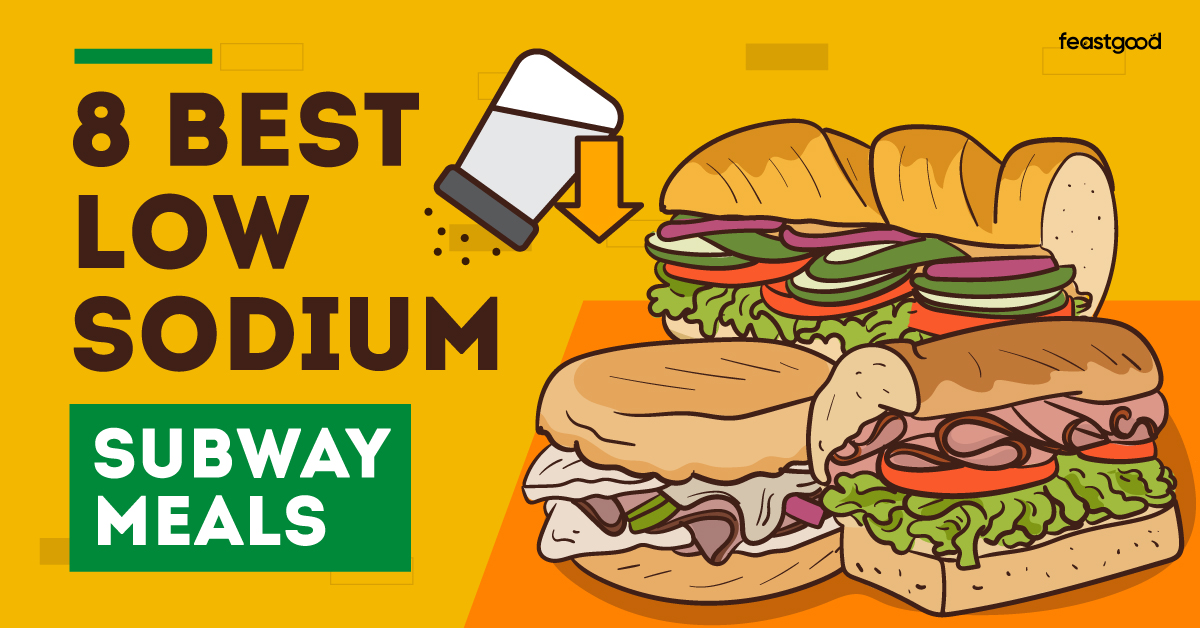 Subway is a fast food option that allows for extensive customization, which is why Subway is one of the best options for those trying to reduce their sodium consumption.

The best low sodium meals at Subway are:

Although Subway is a lower sodium option than many other fast-food restaurants, it’s easy to still overconsume sodium if you don’t know what to order.

Is Subway High In Sodium?

Subway has more high sodium menu items than low sodium items so I would consider Subway to be high in sodium.

However, compared with other fast food options, it’s lower in sodium, making it one of the best options if you’re on the go.

What Is Considered Low Sodium At Subway?

At Subway, menu items that are considered low in sodium are those that have 500mg or less sodium per serving. This is based on the 1200 to 2500mg daily sodium recommendation.

Assuming that you’re having 3 meals per day, each meal should have between 400 to 500mg to be considered low sodium.

At Subway there are many opportunities to customize your order by selecting which types of bread you want, your protein source, vegetables, and sauces.

All of these can add up quickly, so it’s important to be mindful of how much sodium each option has.

Tips On Reducing Sodium At Subway

To reduce your sodium intake t Subway you can:

Use A Kids Size Sandwich Bread

To reduce your sodium consumption while eating at Subway, it would be best to choose a kids size sandwich bread because it’s lower in sodium than the 6” sandwich bread.

It’s best to choose a smaller bread portion so that you can have more wiggle room when choosing your protein source, vegetables, and sauce without going over the recommended amount fo sodium.

If you are choosing to go with a  6-inch sub, the lowest sodium bread would be the Multigrain Bread (310mg), and the bread with the most sodium is the wrap (580mg).

When customizing your sandwich at Subway, it’s best to choose a lower sodium protein source because the sodium content of meat can add up quickly.

All other protein options have more than 500mg of sodium and are therefore not a good choice for those trying to limit their sodium consumption.

It would be best to select one of the lower sodium options from the list above because you will need to account for the sodium in the sandwich bread as well.

My recommendation is to pick either the grilled chicken, chicken strips, or egg patty.

When ordering your meal at Subway you should also be mindful of the amount of sodium in the condiments you’re selecting.

It’s best to go for a condiment like mayonnaise, sweet onion, or smokey honey mustard because they’re lower in sodium.

I would recommend you stay away from the creamy sriracha because it’s the highest in sodium.

As well, the figures above are based on one standard serving size.  You can always ask Subway to go “light on the sauce”, which could reduce your sodium intake by 30-50%.

This gives you the benefit of still having the flavor of the sauce, without it being too much sodium.

When you’re customizing your Subway order, it’s important to know which vegetables to choose and which you may want to limit based on their sodium content.

I recommend choosing the 0mg options like spinach, tomatoes, lettuce, green peppers, and cucumber because it’s an easy way to reduce your sodium consumption.

Ask For No Cheese

Lastly, to reduce your sodium intake at Subway, you should order your meal without cheese because cheese adds a significant amount of sodium for a relatively small serving size.

A serving of cheese has between 35mg (swiss) and 200mg (cheddar), so by skipping the cheese you might be able to still have a protein source, a sauce, and the veg that you like on a sandwich without going over the 500mg sodium guideline.

Related Article: What To Eat At Subway When Bulking or Cutting (6 Meals)

The lowest sodium meal that you can get at Subway is the Kids Size Veggie Delight Sandwich.

This sandwich only has 210mg per serving if you’re ordering it on mini multigrain bread and it’s served with e lettuce, tomatoes, onions, green peppers and cucumbers.

If you had it on a potato bun instead of the mini multigrain it would be even lower in sodium, then you would reduce the sodium content by 20mg.

Another low sodium option at Subway is an English Muffin, which has 210mg of sodium.

You could order an English muffin with butter (+20mg of sodium) or peanut butter (+5mg of sodium) for a quick, low sodium breakfast option.

Subway’s 6-inch veggies Delight Sandwich is also a great option for those trying to lower their sodium intake.

If you opted for multigrain bread, the sodium content of this meal would decrease by 240mg.

You could also order the Beef & Barley Soup from Subway if you’re looking for a low sodium option.

Another benefit of choosing this soup as your meal option is that it should also keep you full for longer because of the protein from the beef and the fiber from the barley; both of which take longer to digest.

Another great low sodium option at Subway is the Kids Size Black Forest Ham Sandwich, which only has 420mg of sodium.

The Black Forest Ham sandwich is served on a mini multigrain bun with lettuce, tomatoes, onions, green peppers and cucumbers.

If you want to reduce the sodium content further you could choose to order this sandwich on a potato bun, which has less sodium than the multigrain.

One of the most delicious low sodium options at Subway is the Chipotle Chicken Sidekick which has 410mg of sodium.

Another low sodium option at Subway is the Kids-size turkey breast sandwich, which has 440mg of sodium.

Similar to the other kid’s size sandwiches, the turkey breast sandwich is served on a multigrain bun with lettuce, tomatoes, onions, green peppers and cucumbers.

The last Subway menu item for those who want to consume less sodium is salads.

Each of these salads is served with lettuce, spinach, tomatoes, onions, green peppers, cucumbers and olives. However, the values do not reflect any salad dressing unless specified.

The meals to avoid have more than 1500mg of sodium because this is considered a very high sodium item at Subway.

The meals to avoid at subway are:

What Subway Item Has The Least Amount of Sodium?

The Subway item with the least amount of sodium is the kid’s Veggies Delight Sandwich which only has 210mg of sodium. This includes lettuce, tomatoes, onions, green peppers and cucumbers on the sandwich.

Which Bread At Subway Is Low In Sodium?

The top 3 types of meat that are lowest in sodium at Subway are plain chicken strips (210mg), rotisserie-style chicken (260mg), and grilled chicken (300mg).

How Much Sodium In Subway Tuna Sandwich?

The Subway 6” Tuna Sandwich has 660mg of sodium assuming that it’s served on Italian bread and is served with mayonnaise and select vegetables.

How Much Sodium In Subway Steak and Cheese?

A steak & cheese 6” sandwich at Subway has 1090mg of sodium if it’s served on Italian bread with select vegetables; however, this does not include any sauce that you may add.

How Much Sodium In Subway Meatball Sub?

In a Subway 6” meatball marinara sub there is  1140mg of sodium assuming that you’re ordering it on Italian bread with select vegetables.

How Much Sodium In Subway Cold Cut Sandwich?

A 6” cold cut sandwich at Subway has 910mg of sodium, if it’s served on Italian bread and served with select vegetables; however, this doesn’t include sodium from any sauce you may add.

How Much Sodium In Subway Oven Roasted Chicken?