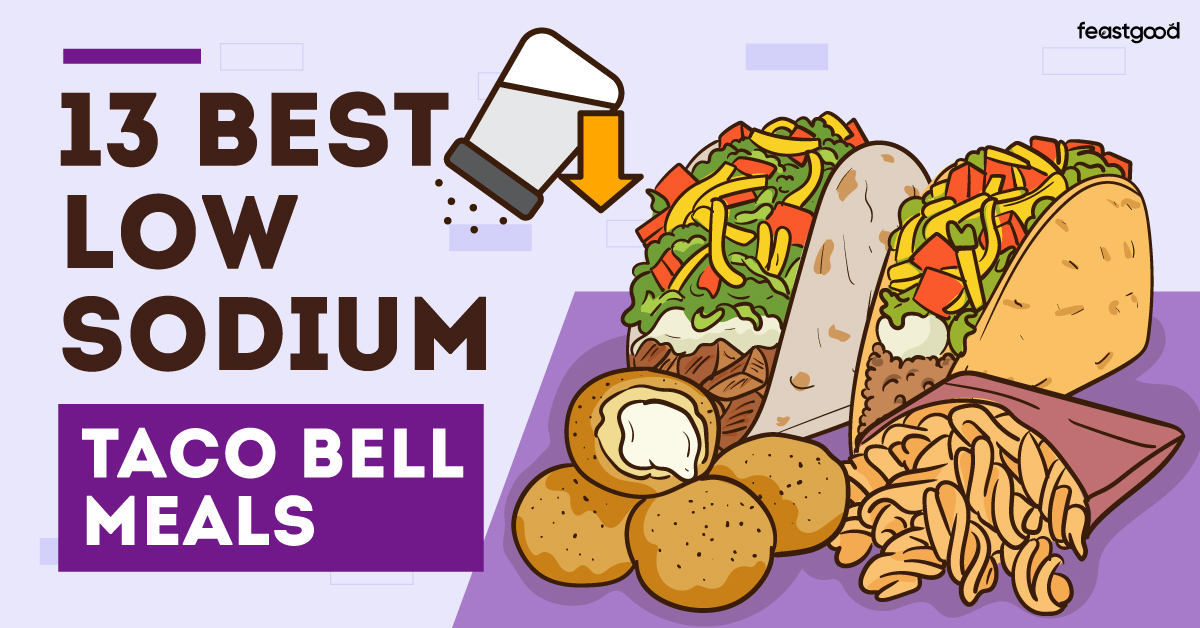 Taco Bell is one of my favorite fast food chains, which is why it’s exciting that they have many lower sodium options available for those who still want to be health-conscious.

The best low-sodium meals at Taco Bell are:

Taco Bell can be a great fast-food option even if you’re trying to reduce your sodium intake; however, it’s important to know what to order and what not to order.

Is Taco Bell High In Sodium?

Despite Taco Bell having some low sodium options, I would consider Taco Bell to be high in sodium because the majority of their menu items have a lot of salt and are not easily customizable for those requiring a low sodium diet.

That doesn’t mean you can’t eat at taco bell on a low-sodium diet. It just means you need to be more mindful of your choices and that your options will be limited.

What Is Considered Low Sodium At Taco Bell?

At Taco Bell, a low sodium meal or menu item is anything that has less than 500mg of sodium. This is because 500mg is the most sodium that one meal should have if you’re to stay within a 1200 to 1500mg daily limit.

Research has shown that those who want to maintain a healthier blood pressure should consume closer to 1200 to 1500mg of sodium per day.

To reduce the sodium content of your order at taco bell:

Out of all the menu items at Taco Bell, the burritos are the highest in sodium, and therefore should be avoided if you’re trying to keep your sodium intake low.

When you compare soft tacos to burritos, you can see that the tacos are always significantly lower in sodium than the burritos.

A fantastic option at Taco Bell is ordering “Fresco Style”, which means that the menu items will be served with their fresh pico de gallo instead of guacamole, mayo-based sauces, cheese sauces, and shredded cheese.

This allows for a significant sodium reduction and is a much better option for those trying to reduce their sodium intake.

Another tip to reduce your sodium consumption at Taco Bell is to order crunchy tacos instead of soft tacos because they’re always lower in sodium.

Lastly, when ordering at Taco Bell you should stick to sour cream and hot sauce as your choice of sauce because they’re lower in sodium than the other sauces.

The lowest sodium menu item at Taco Bell is the cinnamon twists, which have 115mg of sodium per serving.

The cinnamon twists are a puffed corn twist that is coated in cinnamon sugar and are a great dessert option for those who want low sodium dessert.

Another low sodium dessert option from Taco Bell is the Cinnabon delights which only have 160mg of sodium in a 4 pack.

The cinnamon delights are donut bites that are filled with cream cheese frosting and coated in cinnamon and sugar.

The bean crunchy taco is another great low sodium menu item at Taco Bell because it only has 240mg of sodium.

The next menu item that is low in sodium at Taco Bell is the beef crunchy taco, which is available in the regular version (300mg) and fresco style (250mg).

Another great low sodium option if you just want a snack is an order of chips and cheese, which only has 300mg of sodium per serving.

This is the perfect low sodium option if you’re just wanting a snack rather than a full-size meal.

The beef crunchy taco has 320mg of sodium and is great for those who like a fully loaded taco.

The fries at Taco Bell are also a low sodium option, as they only have 350mg of sodium per serving.

However, this only applies to the plain fries because the chili cheese fries and the fries supreme are very high in sodium (800mg & 730mg respectively).

I called a Taco Bell to see if their fries are salted, and here’s what they said:

“The fries are salted as soon as they come out of the oil, but you can ask for them to be made without salt when you order”.

So if you want to reduce your sodium intake further, then you could ask for them to be made without salt when you order. This would decrease the sodium content by approximately 50-100mg.

The most exciting low sodium menu item at Taco Bell is probably the nacho cheese Doritos taco supreme, which has 360mg of sodium.

The shell of this taco is made with nacho cheese Doritos chips, and it’s filled with seasoned beef, lettuce, tomato, cheddar cheese, and topped with sour cream.

Another low sodium taco option at Taco Bell is the bean soft taco supreme which has 450mg of sodium.

This taco has a soft shell and is stuffed with refried beans, lettuce, tomato, cheddar cheese, and topped with sour cream.

The bean chalupa from Taco Bell is another great low sodium option because it only has 450mg of sodium.

The bean chalupa is a mixture of beans, sour cream, a three cheese blend, lettuce, and tomatoes served in a crunchy and chewy flatbread. This is a great option for those who like a soft shell but still want some crunch.

The fresco-style steak taco is a lower sodium option at Taco Bell, which is part of their reduced-fat menu items.

This taco is served on a flour tortilla with steak, lettuce, and tomatoes and only has 450mg of sodium.

The regular chicken taco is served in a flour tortilla and comes with chicken, cheese, tomato, and lettuce. The fresco-style chicken soft taco also has a flour tortilla but only contains chicken, lettuce, and tomato.

The regular beef soft taco is too high in sodium because of the cheese it contains, but the fresco-style beef soft taco, which only has lettuce and tomato, is low in sodium.

The meals to avoid at Taco Bell are those that have more than 1000mg of sodium because this is considered a very high sodium intake for only one meal of the day.

The meals with more than 1000mg of sodium are:

What Taco Bell Item Has The Least Amount of Sodium?

The Taco Bell item with the least amount of sodium is the cinnamon twists, which have 115mg of sodium per serving and are a dessert item at Taco Bell.

What Is Taco Bell Sodium Warning?

Taco Bell has a new sodium warning for menu items that are higher than 2300mg of sodium because this means that those items are over the recommended upper limit for sodium consumption and therefore could cause health issues over time.

Taco Bell tacos are one of their lower-sodium menu items, especially if you order a crunchy taco rather than a soft shell taco.

How Much Sodium In Taco Bell Bean Burrito?

How Much Sodium In Taco Bell Chicken Chalupa?

The Taco Bell chicken chalupa supreme has 520mg of sodium, which is just over the recommended amount of 500mg of sodium.

How Much Sodium In Taco Bell Chicken Quesadilla?

A chicken quesadilla at Taco Bell has 1130mg of sodium because of the amount of cheese in the quesadilla, which is a high sodium food.

How Much Sodium In Taco Bell Hot Sauce?

How Much Sodium In Taco Bell Crunchwrap Supreme?