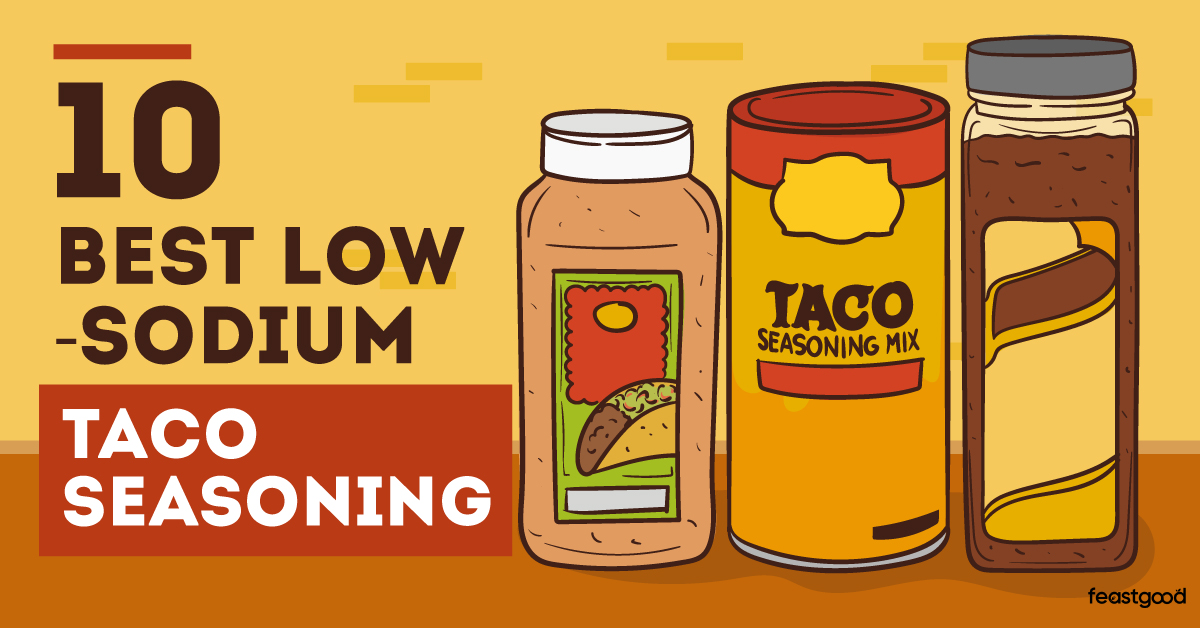 There is now a range of low-sodium taco seasoning products that you can get in stores and online. They are perfect when you’re trying to reduce your sodium intake but still want to add extra flavor to your dishes.

In this article, I’m going to cover the 10 best low-sodium taco seasoning options for you, as well as give you my favorite homemade sodium-free taco seasoning blend.

Before I cover these products, let’s talk about what ‘low-sodium’ actually means when it comes to taco seasoning.

What Are the Guidelines for Sodium Consumption?

As much as sodium is demonized in the media nowadays, it is an essential nutrient for every human to consume. We need dietary sodium to maintain the ideal levels of sodium in our tissues and organs.

Sodium has a range of functions in the body, including regulating fluid balance, helping to send nerve impulses through the body, and enabling muscles to contract and relax. It’s estimated that we need around 500 mg of sodium every day to complete these essential functions. Without sufficient sodium in your diet, each of these processes can be disrupted.

What Defines A “Low-Sodium” Taco Seasoning?

Make sure to look carefully at the nutrition label when searching through taco seasoning products so you get the best ones for your health.

Remember that the product will most likely state the amount of sodium per serving (not per package/container). If you plan on consuming more than one serving of taco seasoning at once, you will need to calculate your total sodium consumption in that meal based on how many servings you want to have (and how much sodium the other ingredients have).

If you’re looking for other types of seasonings that are also low in sodium, check out the Flavor God seasonings.

The Old El Paso Taco Seasoning Mix With 25% Less Sodium has 220 mg of sodium per 2 tsp serving and is perfect for flavoring tacos, soups, meats, and vegetables.

The spicy flavor of this taco seasoning comes from the chili peppers that it contains. Chili peppers contain high levels of vitamin C, which is essential for immune function and collagen protein production, and B6, which is vital for energy production in the body.

Made with 30% less sodium than the original version, the McCormick Reduced Sodium Taco Seasoning Mix provides 250 mg of sodium per 2 tsp serving. This seasoning is made with a blend of chili peppers, paprika, and oregano.

Paprika contains high amounts of vitamin A and provitamin A carotenoids, which can lower oxidative stress (an imbalance in your body of free radicals, molecules that can damage your cells, and antioxidants, substances that protect your cells from damage). Excessive oxidative stress has been linked to a range of chronic diseases.

Compared to the original Kroger Taco Seasoning, the Reduced Sodium version contains 25% less sodium per serving. It has 270 mg of sodium and 20 calories in every 2 tsp.

This product is made using wheat flour, a cup of which provides 85%, 77%, and 57% of the daily recommended intake of vitamin B1, selenium, and folate, respectively.

Vitamin B1 helps to keep your nervous system, heart, brain, and digestive system healthy, while selenium can prevent heart disease and cognitive decline. Folate is required to make new DNA in your cells and aids in the breakdown of proteins.

Chipotle peppers have been shown to improve heart and blood vessel health and reduce the risk of cardiovascular disease. It can also boost metabolism, aid in weight loss, and help to regulate blood sugar levels.

Spiced with chili peppers, the Old El Paso Original Taco Seasoning Mix is a great option when you want to consume less sodium. There are 15 calories and 300 mg of sodium in each 2 tsp serving.

This product is also flavored with onion powder, which can boost your immune system, improve heart health, and improve digestion.

Whether you want to flavor beef, chicken, tofu, or veggies, the Taco Bell Original Taco Seasonings Mix is a great low-sodium option with 300 mg per 2 tsp serving.

It’s made primarily using wheat flour, garlic, and salt. Garlic is a known anti-inflammatory and may reduce your chances of getting the common cold by enhancing your immune system.

The Siete Spicy Taco Seasoning is perfect for those of you who love adding an extra kick to your dishes. It’s made with chili powder, tomato powder, and ground dates.

Tomato powder contains high amounts of vitamin A and C, both of which are strong antioxidants that reduce oxidative stress in the cells and reduce the risk of DNA damage. Vitamin A is also key for metabolism and bone strength.

The McCormick Premium Taco Seasoning Mix is made with chili pepper, cumin, and oregano. It contains 360 mg of sodium and 20 calories per serving.

Cumin contains https://www.ncbi.nlm.nih.gov/pmc/articles/PMC5465813/ which are potent antioxidants. They lower stress and inflammation levels in your body, protecting you from a range of diseases.

If you enjoy a zesty flavor to your taco seasoning, the Simply Organic Southwest Taco Seasoning is a great choice. It’s below the recommended 400 mg of sodium per serving and is made out of 100% organic spices.

This product is made with chili pepper, paprika, garlic, and onion, all of which have unique health benefits as discussed above.

With 360 mg of sodium per serving, Nature’s Promise Organic Taco Seasoning sits at the higher end of the recommended 400 mg limit. However, it still contains a lot less sodium than standard taco seasoning products.

It’s made with organic brown rice flour, which has been shown to help regulate blood sugar levels and lower blood cholesterol levels, making it helpful for those with diabetes and cardiovascular disease.

Should You Make Your Own Low-Sodium Taco Mix? 3 Reasons

Below, I’ve listed some of the main reasons why you should consider getting your own ingredients and making homemade low-sodium taco seasoning.

1. You Can Control the Amount of Sodium in the Seasoning

Unlike taco seasoning from the store, you can control the amount of salt that you add to your homemade taco seasoning. You can also choose ingredients that are sodium-free or contain very low amounts of sodium to minimize the total sodium content in your seasoning.

2. You Can Adjust the Taste According to Your Preferences

When you are making your own taco seasoning at home, you can include all of your favorite ingredients to create something that suits your taste preferences. You can try a range of different ingredient combinations to see which ones you enjoy the most.

You can also mix up your ingredients depending on what foods you are coating in your taco seasoning. For example, you might prefer a spicier taco seasoning for your meats and a tangier seasoning to flavor your vegetables.

Some store bought taco seasoning brands can be expensive to buy and often only contain a handful of servings. By making your own taco seasoning at home, you can gather a selection of simple ingredients that cost less than $10 in total and can produce many more servings than a standard taco seasoning product.

Is It Hard To Make Your Own Taco Seasoning?

It’s not too difficult to make your own homemade taco seasoning. You will need a small range of ingredients and a basic mixing bowl to combine them into one mixture.

Making your own taco seasoning takes just 10 minutes and is simple even for those of you who aren’t experienced in the kitchen.

Here is a simple no sodium taco seasoning recipe for you to follow.

Other Low-Sodium Seasonings and Sauces