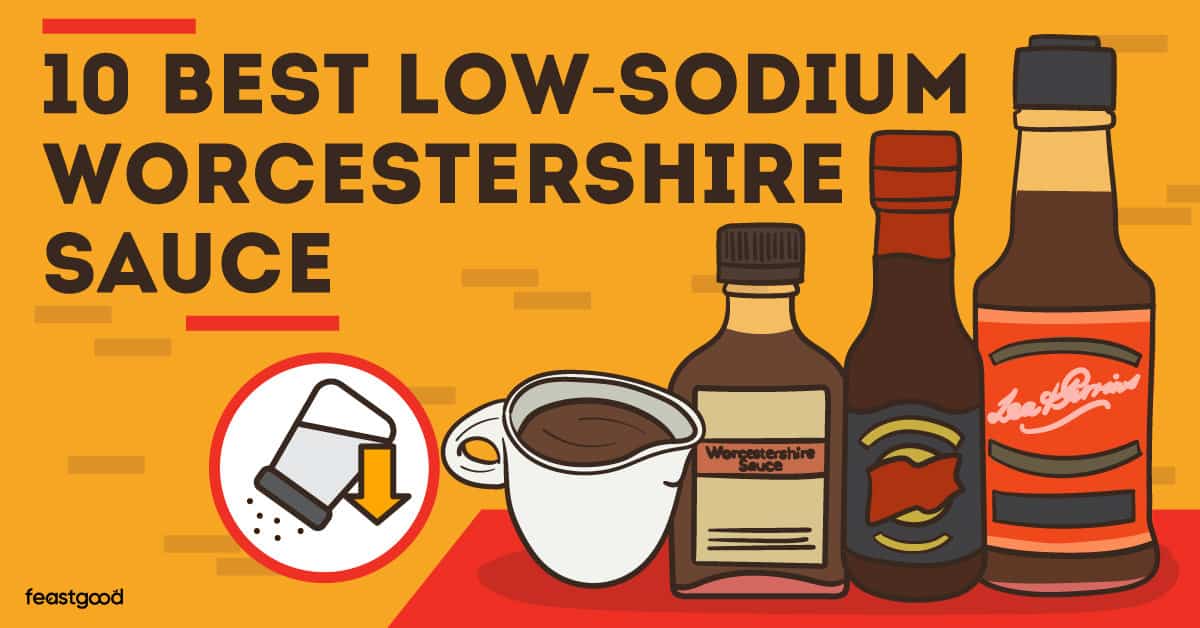 Worcestershire sauce is a great way to add some flavor variety to your meats. However, if you are trying to cut back on your sodium intake, you might wonder if it’s okay to consume it.

As a Registered Dietitian, I educate my clients on how to make smart choices when buying their foods. If sodium is a major concern, then choosing a low-sodium Worcestershire sauce can help with their overall health.

In this article, I analyzed 10 brands of Worcestershire sauces that are good to have on a low-sodium diet.  All of the options below get my stamp of approval!

What Defines A “Low-Sodium” Worcestershire Sauce?

Here are its recommendations:

The average sodium content for Worcestershire sauces, in general, is around 150-250 mg of sodium. Hence, you should look for brands with less than 140 mg of sodium per serving.

Keep in mind that the sodium content is given per serving. If you consume more than one serving, multiply it by the number of servings.

If that is the case, make the necessary adjustments in other ingredients and foods you eat (like cooking with less salt or avoiding any canned foods that are high in sodium during the day) to compensate for the extra sodium and avoid having too much throughout the day.

Bourbon Barrel Aged Worcestershire Sauce is the product with the lowest sodium content on the market that I recommend. It has only 35 mg of sodium per serving (1 teaspoon).

One of the things I love about it is the simplicity of its ingredients. I love when processed foods have a short list of ingredients you can read instead of guessing what they are. It only has water, vinegar, soy sauce, and spices.

Like I always tell my clients, food should contain ingredients without complicated names you can recreate at home and not in a lab.

It also contains only 5 kcal per serving, making it an ideal option for those looking to control their caloric intake.

Lea & Perrins Reduced Sodium Worcestershire Sauce is an excellent choice if you want to lower your sodium intake. While the regular sauce is not that high in sodium, to begin with, this is the one to go with if you’re trying to watch your sodium consumption.

While it has molasses and sugar, the sugar content is not a lot. It only offers 1 g of sugar per serving. This means this Worcestershire sauce is also a great option if you want to cut back on your sugar intake.

For those who follow an organic lifestyle, this is an excellent brand with organic ingredients that won’t increase your sodium intake too much.

One teaspoon of this Worcestershire sauce offers only 65 mg of sodium.

It also has 5 kcal per serving size, making it a very low-calorie option to add some flavor to your meals. Like the previous sauce, it contains molasses and sugar, but it only offers 1 g of sugar per serving.

We already discussed the reduced sodium version of the Lea & Perrins Worcestershire sauce, but what about the original version?

The original Lea & Perrins Worcestershire sauce is also a great low-sodium sauce. One teaspoon has 65 mg of sodium per serving, still way below the recommended intake of 140 mg per serving.

It also contains natural ingredients such as distilled white vinegar, onions, and garlic, and it only has 5 kcal per serving.

It has a stronger flavor since it has anchovies in its ingredients, but that makes it special.

French’s Worcestershire Sauce is another option when you want to consume a low-sodium sauce. It offers 65 mg of sodium per serving (1 teaspoon).

The difference between this and the other brands is that while it contains molasses and sugar, it has less than one gram per serving. On top of that, it’s Kosher certified.

So, low in sodium and calorie-free. What more can you ask for!

Crystal Worcestershire Sauce offers only 65 mg of sodium per serving (1 teaspoon). It also has a nice tangy flavor to add some flavor to your meals.

While it only offers 5 kcal per serving, one of the things I don’t like is that it contains corn syrup as one of its ingredients. In my case, I try to avoid highly processed ingredients like corn syrup since they’ve been linked to a higher incidence of obesity.

Now, this doesn’t mean that consuming 1 teaspoon per day of Worcestershire sauce can make you gain weight. For you to gain weight you need to be in a caloric surplus, which means consuming more calories than your body needs to maintain its weight.

So, consuming this Worcestershire sauce won’t significantly increase your calorie intake just because it has corn syrup. I just choose to avoid corn syrup for personal reasons.

Another great option in the low-sodium department is the MontoFresh Worcestershire Sauce Umami-Rich Flavor. One teaspoon offers only 70 mg of sodium, which is 50% below the recommended amount for a low-sodium product.

It has a higher caloric content than the other sauces, but still, 15 kcal per serving won’t jeopardize any weight loss goals you may have.

Annies Homegrown Organic and Vegan Worcestershire Sauce offers the benefit of having all organic ingredients and the certification of not containing animal products.

One teaspoon offers 75 mg of sodium and only contains 5 kcal per serving. Like other sauces, it has molasses and sugar but offers only 1 g of sugar per serving.

JB Worcestershire Sauce contains 80 mg of sodium per serving, which is still below the low-sodium classification.

It is Halal certified, offers a short list of ingredients, and has plum as one of its ingredients, offering a different flavor.

It has a higher caloric content than the rest of the sauces, with 20 kcal per serving, but the serving size is higher (1 tablespoon). If we compared it to the same serving size as the other brands (1 teaspoon), it only offers 6 kcal.

Wizard’s Organic and Gluten-Free Vegan Worcestershire Sauce has the highest sodium content but it is still below the recommendations for low-sodium food products.

This sauce offers 125 mg of sodium per serving (1 teaspoon).

While the higher sodium content means you need to be mindful of how many servings you consume when compared with other brands, it is still considered a low-sodium sauce.

How Much Sodium Is In Lea & Perrins Worcestershire Sauce?

Is There a No Sodium Worcestershire Sauce?