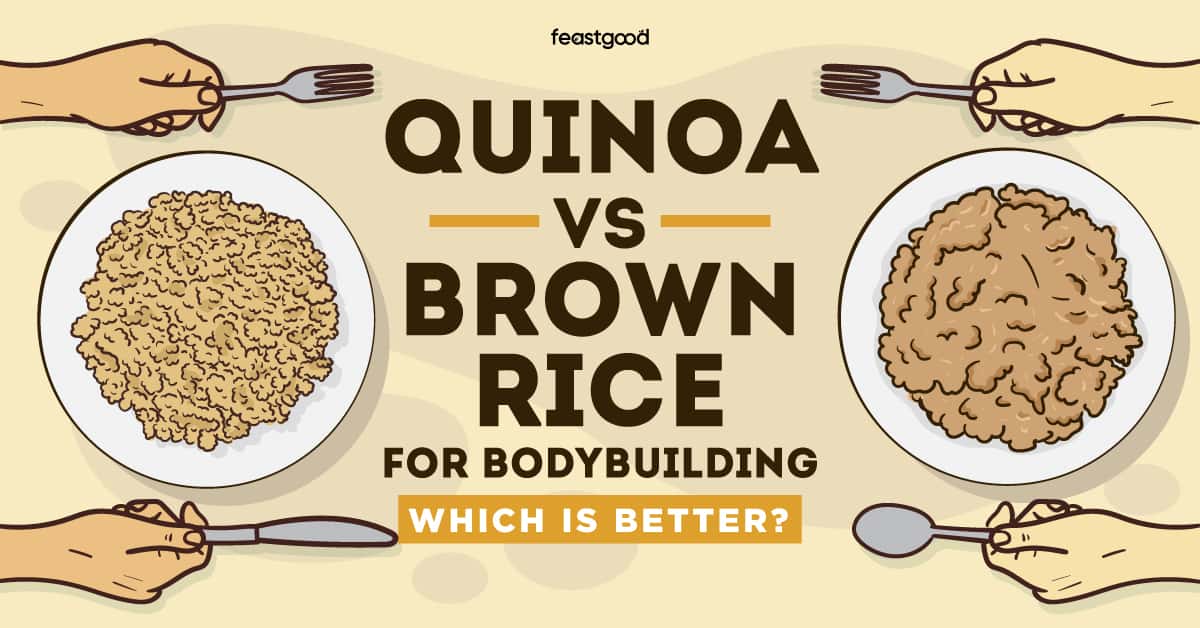 When talking about quinoa and brown rice, most bodybuilders don’t know which one is best.

In this article, you will learn everything related to quinoa vs brown rice for bodybuilding, including:

According to the US Department of Agriculture, here are the calories between cooked brown rice and quinoa in 100 grams of product.

When it comes to the nutritional content of brown rice and quinoa, they are very similar. Although they differ in 3 kcal, it is not a significant difference to be considered.

Both brown rice and quinoa have 120 kcal per 100 grams, which is considered a moderately-high calorie food, especially when compared with non-starchy vegetables like broccoli or carrots (since one cup of these veggies only have around 30-40 kcal).

However, they are not as high in calories as other carb sources like pastries, cookies, or even chia seeds.

This is an advantage since thanks to its caloric content it can be used both in bulking or cutting phases depending on the portion size.

2. Both Are Versatile Foods

One of the benefits of rice and quinoa is their versatility. You can add spices, vegetables, meats, or fats and make it a complete meal in the same dish.

As such, you can modify rice or quinoa according to your specific macronutrient goals quite easily.

If one of the reasons for choosing a certain food over another is the ease of cooking, both brown rice and quinoa share the same cooking method.

Both are placed in a pot where you add boiling water for them to absorb it.

So neither have an advantage when it comes to saving time cooking or how easy it is to prepare meals.

Are you eating the right foods for your bodybuilding goals?

1. Quinoa Has More Protein, While Brown Rice Has More Carbs

Although brown rice and quinoa have a very similar caloric content, they have a very different macronutrient profile. In 100 g of food, you find the following macro breakdown for both foods:

When it comes to carbs, it might seem like a 4.6 g difference between brown rice and quinoa is an important consideration when deciding between the two.

But, for a bodybuilder, it’s not a significant difference because bodybuilders tend to have substantial carb requirements (between 40-50% of their total daily calories coming from carbs).

When you consider how many carbs a bodybuilder eats over the course of a day, 4.6 g won’t make or break your diet (unless you’re on an extremely low-calorie diet, which is only the case if you’re cutting for a bodybuilding competition)

The most significant difference in the macros comes from proteins and fats.

Quinoa has almost twice the protein as brown rice, which is important to note for two types of people:

Finally, quinoa also has twice the number of fats as brown rice.

Fats take longer to digest, which helps release carbs slowly into your bloodstream without having a high glucose and insulin spike.

For those in a cutting phase, thanks to a slower glucose release and fats having a more satiating effect, it will prevent you from feeling hungry during the day and prevent snacking.

This ultimately means that you won’t feel cranky for feeling hungry during the day and won’t crave more calories due to hunger.

2. Quinoa Has Twice The Fiber Compared With Brown Rice

Quinoa has almost twice the fiber as rice.

Fiber helps us fight constipation, have good gut health, and most importantly, it provides satiety (the feeling of fullness).

This means that for a bodybuilder in a cutting phase, where the calories are restricted, you will feel fuller during the day by adding quinoa instead of brown rice.

However, if you’re a bodybuilder in a bulking phase, you actually want to be eating carb sources that are lower in fiber so that you’re able to continue to eat more calories throughout the day without feeling overly stuffed.  If you’re bulking, perhaps brown rice is a better choice.

With that said, if you suffer from Irritable Bowel Syndrome (IBS), I would be cautious with eating both quinoa and brown rice due to its fiber contents.  Some of the symptoms you might experience with high fiber foods if you have IBS are bloating, stomach cramps, and sluggishness.

3. Quinoa Has a Lower Glycemic Index Compared With Brown Rice

The glycemic index measures how fast your body converts the carbs you eat into glucose, which can then be used to provide energy.

However, there are times when you want to have higher glycemic foods in order to have an energy spike, which is right before a workout.  Thus, brown rice is a better choice to add before a workout compared to quinoa. But quinoa is better at all other times throughout the day.

Related Article: Can I Eat Rice While Cutting (5 Things To Know)

4. Quinoa Is A Complete Protein Whereas Brown Rice Is Not

Protein is made of amino acids. Some are made within the body (non-essential), while others are needed through diet (essential). Typically, plant-based protein sources are considered low-quality compared to animal sources since they don’t usually have all the essential amino acids (especially when it comes to the lysine content).

However, quinoa is one of the plant-based options with all the essential amino acids you need, making it a high-quality protein since it is very high in lysine (like I said most plant-based products lack this amino acid).

Lysine is an essential amino acid that is needed for the formation of collagen. This means that it can make your joints healthier.

For a bodybuilder looking to increase their protein intake, quinoa is a better option than brown rice since it will give you more high-quality protein.

5. Quinoa Has Magnesium & Ecdysterone, Which Help In Muscle Growth

Quinoa is very high in magnesium, which studies have shown that it helps maintain muscle mass during tough training sessions, and also has a component called ecdysterone, a naturally occurring steroid.

In a study done, men were supplemented with ecdysterone compared to a control group. Those that took ecdysterone had an average of 2.5-3 kg of weight increase compared to 1 kg in the controlled group.

Thus, concluding that those that took this supplement had a greater muscle mass increase.

6. Quinoa Is High In Quercetin, Which Increases Muscle Strenghth

Quinoa is high in antioxidants, especially one called quercetin.

Quercetin not only does it seem that it can reduce inflammation but it can increase muscle strength. In a study, where people took a quercetin supplement. Those that had the supplement had a 4.7% increase in their isometric strength. Having more muscle strength means that you can lift more weight which creates more muscle fiber ruptures. This ultimately means that your muscles get bigger and stronger.

Additionally, quercetin since it is an antioxidant can also help reduce inflammation in the body, improving your muscle recovery. By having a better muscle recovery, you have improved muscle growth.

Learn more about quinoa in my other article: Is Quinoa Good or Bad For Bodybuilding?

Quinoa vs. Brown Rice: Which Is Better For Bulking & Building Muscle?

Quinoa is better than brown rice for building muscle because quinoa has almost twice as much protein per serving, and contains other muscle-building properties, such as magnesium, ecdysterone, and quercetin.  However, the downside of quinoa is that it’s higher in fiber, which can leave you feeling full after eating.

Since both brown rice and quinoa have a similar caloric content, here’s my recommendation if you’re bulking:

Quinoa vs. Brown Rice: Which Is Better For Cutting?

For weight loss, quinoa is better to add to your diet compared with brown rice. Not only does quinoa provide protein that helps you retain muscle mass during a cut, but it also has a lot of fiber, which will make you feel fuller for a longer time. In comparison, brown rice may leave you feeling hungrier later in the day.

Foods that are very “filling’ are essential for a bodybuilder in a cutting phase to avoid getting hungry during the day. This will avoid constant snacking or looking for foods throughout the day that might make you go over your total daily intake.

Practical Recommendations: Does It Matter Which One You Eat?

Both are great options for a bodybuilder, so does it matter which one you choose in the end?

Aim For Diversity In Foods

Each food has a different macro and nutrient profile. Thus, it is better to have some variety to have an optimal diet. This means that instead of having quinoa as your base carb every day, try mixing it up not only with brown rice but also with other carbs like lentils, black beans, sweet potatoes, and chickpeas.

Keep Track Of Your Intake

Whether you add quinoa or brown rice, it is crucial to keep track of your intake.

For a bodybuilder in a bulking phase, this ensures that you are reaching your total calories. Some might find it challenging to achieve such a high intake, and not getting to that amount won’t get the gains you are looking for.

On the other hand, for a bodybuilder in a cutting phase, it helps to stay within the calorie budget, ensuring that you don’t exceed your calorie limit.

You can use a tracking app like MacroFactor (click to read my review) to help you keep track of your calories and macros during the day.

Eat Whichever One You Enjoy

One of the most important factors is to eat the one you enjoy. Eating food only because it provides benefits won’t make you have sustainable goals, and it can end up creating food aversions.

Never be forced to eat something because it is good for you. Each diet should contain the foods that we enjoy eating, and it should be created for our tastes and preferences.

Eat Whichever One Is Easier To Meal Prep

Although they have very similar cooking times and procedures, you might find it easier to cook brown rice than quinoa. To spend less time in the kitchen and more time at the gym, meal prepping can save you time and money. Thus, if it is easier for you to make a batch of quinoa for the week, then go for it!

Just keep in mind the first point (add some variety). If this week was making a quinoa batch, try brown rice next week instead.

Final Thoughts: Which Is Better?

If I had to choose whether quinoa or brown rice is better for bodybuilding, I would pick quinoa.

It has a more complex macro content, it is more nutrient-dense, and it has the most benefits for a bodybuilder.

Additionally, those following a plant-based approach provide essential amino acids that you need to maintain or grow your muscles.

However, this doesn’t make brown rice a bad option to add. It can help you add calories, and it still provides a good amount of fiber to have a healthy gut.

Is Edamame Good Or Bad For Bodybuilding (Pros & Cons)