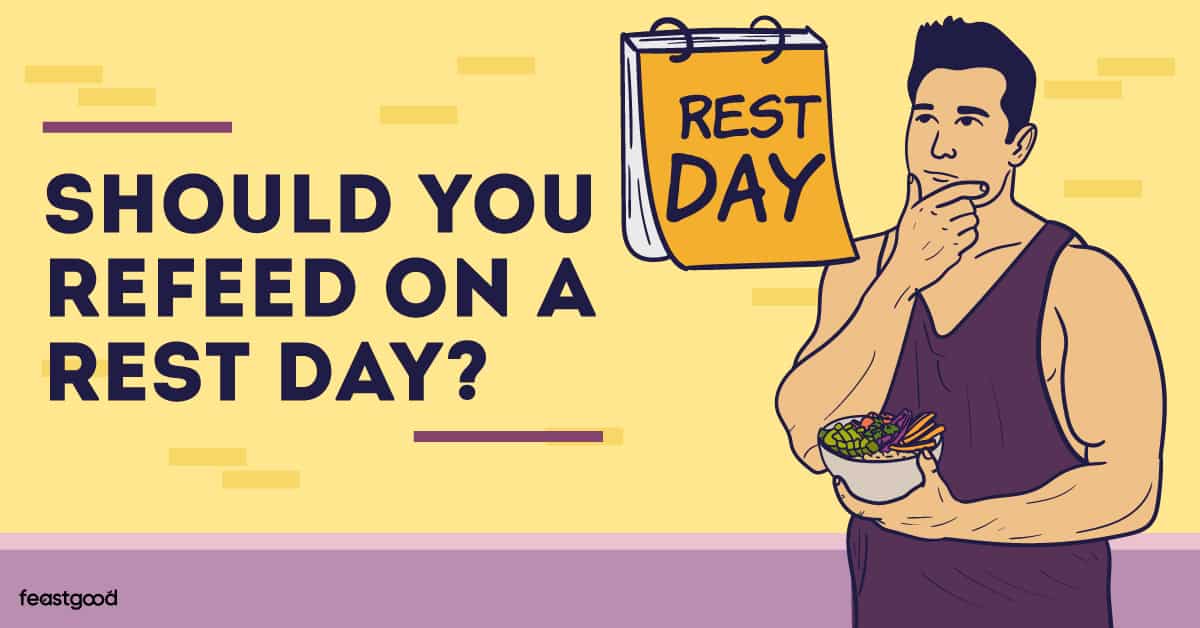 Implementing a refeed on a rest day rather than a training day could ACTUALLY improve the effectiveness of the refeed.

Should you refeed on a rest day? Refeeding on a rest day is a good idea because then the additional calories that we’re taking in can go directly towards replenishing energy stores rather than being burned off before we can use them appropriately.  Additionally, refeeding on a rest day can lead to better hormone functioning and motivation.

With that said, selecting which rest day in our training schedule is going to be the refeed day is important if we’re going to get the most out of the refeed as it relates to maximizing training performance.

Refeed On A Rest Day: An Overview

When setting up a refeed, which is a temporary increase in calories to negate some of the negative effects of dieting (slower metabolism, decreased activity, decreased energy), we should plan for the refeed to be on a rest day from the gym.

When we refeed on a rest day we allow for the increase in calories to be better utilized to replenish our energy for future activity, increase our leptin hormone levels so that we’re more satisfied after our meals (leptin tells us if we’re hungry or not), and give ourselves the mental break from dieting that we deserve.

Although it may be tempting to want to train the day that we’re consuming more calories, it is actually more beneficial to wait until the following day.

This is because it takes time for the carbohydrates we’ve ingested to actually replenish our glycogen stores (energy stores) that we use when we workout, so if we’re working out on the same day that we’re refeeding we may not actually get the full benefit of the increased carbs/calories.

That being said, most people should have more than one rest day a week so deciding which rest day will be our refeed day is also something that we should determine.

We should look at our training plan and determine which training day requires the most energy (typically this would be a higher volume or higher intensity leg day, or a full-body day).

Ideally, the day before our most strenuous day is a rest day, but if it’s not then perhaps we change things around for this week to make sure that it is a rest day so we’re able to replenish our energy stores in time to perform our best during this training session.

Benefits of Refeeding On A Rest Day

The benefits of refeeding on rest days are:

Refeeding on a rest day allows us to replenish our depleted energy stores better than if we were to refeed on a day when we were working out.

This is beneficial because by resting, we actually give our body a chance to absorb these nutrients so that we can use them more effectively later on.

If we try to train the same day that we are refeeding we actually limit the extent to which we can use these resources because we aren’t allowing time for absorption of these nutrients before burning them off.

Refeeding on a rest day leads to better hormonal responses because all of the increased calories and nutrients that we are bringing in can be used to increase hormone concentrations that get depleted when we diet for longer periods.

One of the main hormones that we’re interested in boosting is leptin which is a hunger hormone that communicates to our brain that we are satisfied because food is coming in. If leptin is low we will not feel satisfied and therefore will be hungry more often.

If we give ourselves permission to rest while we’re refeeding we can give leptin and other hormones a better chance to return to baseline levels, rather than burning off these additional calories before our body can use them to regulate our hormones.

When we refeed on a rest day we give ourselves a mental break from dieting to allow our body and mind to recover, which is needed as dieting can be taxing, especially if we’ve been doing it for an extended amount of time.

Having a day to just rest and recuperate is so valuable in increasing diet adherence, which is ultimately what’s going to get us to our goals long term.

Although working out can be a source of stress relief when energy is already depleted it probably isn’t the best option for allowing optimal recovery to occur.

Drawbacks of Refeeding On A Rest Day

The drawbacks of refeeding on a rest day are:

The main concern about refeeding on a rest day is that if we are not going to the gym and we don’t have any other source of entertainment for the day, we could be more likely to overeat out of boredom.

Adherence to rest day calories and macros becomes more challenging if we’re prone to emotional eating and we have no healthy coping mechanisms around to keep us from eating our feelings.

To reduce the risk of overeating or binge eating, we should have some planned activities or coping mechanisms in place to implement on our rest days.

How To Refeed On A Rest Day Properly: 5 Rules To Follow

The 5 rules to follow for refeeding on a rest day are:

For the best results while refeeding on a rest day we need to increase our calories up to a maintenance level to bring ourselves out of a calorie deficit.

Coming out of a deficit is necessary for us to replenish our energy stores, hormone concentrations, and promote diet adherence.

In addition, because maintenance is the goal we also want to avoid a calorie surplus which refers to the number of calories that would increase the potential of weight gain.

Because the goal is to continue seeing fat loss and body composition progress we will want to avoid a calorie surplus while refeeding because that is more calories than we’re actually needing to get the most benefit out of the refeed.

2. Ensure The Increase In Calories Comes From Carbohydrates

While refeeding on a rest day (and just refeeding in general) we want to ensure that the increase in calories comes from increasing our carbohydrate intake.

Increasing our carbohydrates is the main priority when we’re refeeding because carbs are the body’s preferred energy source, and they also have the greatest impact on improving leptin concentrations (satiety hormone).

While there is nothing wrong with consuming protein and fats because they both serve an important role, we do not need to increase them to get the benefits from a refeed.

Sometimes it’s worth lowering our fat intake so that we can increase our carbs further while keeping our calories at a maintenance level.

3. Stay Above The Minimum Requirements For Fat Intake

Although carbohydrates are the goal while refeeding and it is often mentioned that fat intake should be limited, it is important for our hormonal health that we don’t dip below certain amounts.

The lower level of fat intake for men is 30 grams and for women it’s 45 grams. These values are important to consider so that we are keeping our overall health in check while we’re refeeding.

While refeeding on a rest day it is important to continue engaging in everyday activities because although we are resting and allowing our bodies to recuperate, that doesn’t mean that we are confined to the couch.

I think having activities that keep us busy or out of the house is probably beneficial in preventing us from getting to the point that we’re eating out of boredom, which often leads to binge eating episodes because calories have been restricted.

5. Return To Deficit Calories After The Refeed Is Over

Returning to a deficit once the refeed is over is one of the most important things we must do when refeeding regardless of if it’s on a rest day or not.

A refeed is an opportunity to set ourselves up for success by increasing our energy, optimizing our hormones, and boosting our mood but if we don’t return to a deficit when we’re supposed to after we’ve put the work in then we won’t continue to see further weight loss.

There is nothing wrong with this if we’re satisfied with where we’re at but if we want to continue making progress then returning to a deficit is necessary.

Refeeding on a rest day is a great idea so that we’re using these additional calories to replenish energy stores, boost satiety hormones, and maximize our workout. However, we should be intentional about keeping busy so that we don’t emotionally eat while we’re not in the gym.

3 Reasons Why Tilapia Is Good For Bodybuilding (Plus, 1 Con)

Are Chia Seeds Good or Bad For Bodybuilding? (Pros & Cons)