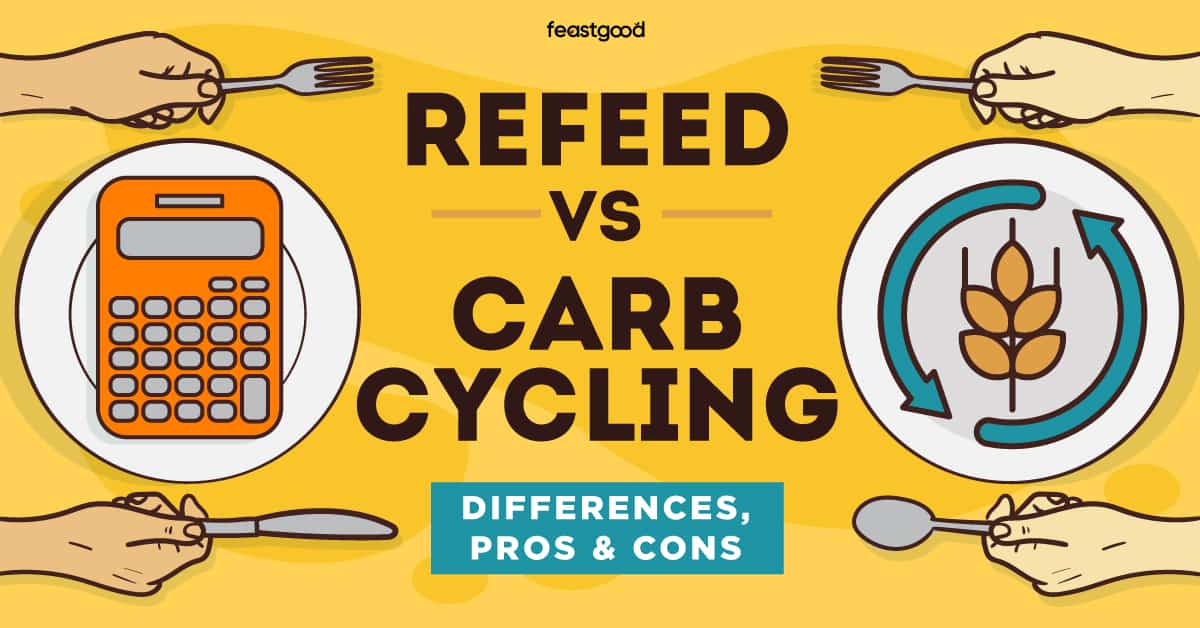 Refeeding and carb cycling both have the potential to enhance weight loss results, body composition changes and improve training performance while dieting.

I’ll break down the differences further with some examples below, but what you need to know is that refeeding and carb cycling are only successful if they are used in the right context and performed in the right way.

What Is A Refeed Day?

A refeed day is a planned temporary increase in calories that occurs while dieting to reduce the negative effects that dieting can have on our metabolism and mindset.

Metabolism is a sum of our body’s energy expenditure as it relates to our bodily functions (ex: breathing), the thermic effect of food (the amount of energy it takes to digest foods), non-exercise activity (ex: housework), and exercise.

All of these influence weight loss because they reflect how many calories we are able to burn per day. If our energy expenditure decreases as a result of dieting, then we won’t be able to continue to lose weight as readily.

Dieting reduces our metabolism because when fewer calories are coming in, our metabolism slows down because the body wants to preserve as much energy as possible for basic bodily functions. This is counterproductive when we’re purposely trying to lose fat.

Refeeding can help because it involves a temporary increase in calories that signals to our body there is enough food coming in and that it doesn’t need to send out constant hunger signals to get us to eat.

Anyone who is dieting for long periods or is dieting aggressively should be refeeding to keep our metabolism from slowing down and to increase our ability to stick to our diet.

Dieting can be mentally tough and having a refeed around the corner could be just the thing that we need to keep us focused on the end goal because of the mental relief that it can provide.

How To Implement A Refeed Day?

If you don’t know what a maintenance level of calories looks like for you, then check out our refeed calculator, which can estimate your calorie target while refeeding.

One of the most important things to know about refeeding is that the increase in calories that brings us up to a maintenance level needs to come purely from carbohydrates. This is because carbohydrates are the nutrient that replenishes energy stores that have been depleted, and they can regulate hormones that are out of balance as a result of dieting.

Refeeds typically last 1 to 2 days depending on the length and intensity of the dieting phase, and they could occur weekly, bi-weekly or monthly based on the same factors.

For additional details on the frequency and duration of refeeding, check out my other article Should I Refeed While Cutting? (Yes, Here’s Why & How).

The downside of refeeding is that it could easily be turned from a controlled increase in calories to an all-out binge eating episode very quickly. This is the case if we were feeling overly restricted while dieting and then feel out of control around larger quantities of food.

Refeeds are only worth the effort if they are executed correctly, if a refeed is turning into a binge eating episode then it isn’t worth trying to incorporate refeeds as they would be doing more harm than good as we work toward our fat loss goals.

What Is Carb Cycling?

The idea behind this is that on the days where carbs are higher, it may signal to the brain that enough food is coming in and prevent our metabolism from slowing down by burning fewer calories and increasing energy levels. The higher carb days would also be more beneficial for workouts to encourage better performance.

On the lower carb days, the goal is just to encourage fat loss by allowing the body to use fat as an energy source. Generally, lower-carb days are assigned to days of the week when energy expenditure is lower and the additional carbs are unnecessary (example: rest days).

This is because when we’re working out or more active, carbs are the body’s preferred fuel source and are therefore utilized more efficiently, but when we’re sedentary or less active our body uses fat more efficiently for energy.

When we’re carb cycling we can tailor our nutrition to reflect our daily expenditure so that we’re more efficient in the way that our body utilizes nutrients for energy. This strategy has the potential to improve our performance, aesthetics, and metabolism.

Carb cycling would be a great strategy for those who are more performance-based (i.e. athletes) and want to have days where they can have more carbs to help fuel their performance and then maximize the body’s ability to use fat as fuel on rest days.

However, if we’re someone who just wants to keep things simple with minimal adjustments from day-to-day, then carb cycling is likely not the best option.

How To Implement Basic Carb Cycling

To implement basic carb cycling we can adjust our carb intake based on a calorie deficit by finding our deficit calories and then adjusting carb intake to be lower on non-workout days and higher on workouts days.

Let’s say I weigh 160lbs and my deficit calories have been calculated to be 1800 calories per day.

The first step would be to set your protein intake.

My protein intake for the day would be set at 160 grams because the general recommendation for protein intake while dieting is 1 gram per pound of bodyweight (1g/lb BW).

To calculate what percentage of protein makes up the total calories we first need to determine how many calories 160 grams of protein equate to.

Once you have your protein intake, you can then calculate your carb and fat intake for both high and low carb days.

For higher carb days I want 50% of my calories to come from carbs. So 1800 X 0.5 = 900 calories for carbs, which I can divide by 4 to convert grams of carbs per day because carbs have 4 calories per gram.

Therefore on higher carb days that are reserved for workout days, I would eat 160 grams of protein, 225 grams of carbs, and 28 grams of fat.

On lower carbs days protein intake should stay the same, so all we have to alter is the number of carbs and fat to stay within the calorie deficit.

So for lower carb days, I would eat 160 grams of protein, 113 grams of carbs, and 78 grams of fat to maintain a calorie deficit.

The similarities between refeeds and carb cycling are:

1. They Have The Same End Goal

Both refeeds and carb cycling have the same end goal, to achieve weight loss and improve body composition.

This is where refeeding and carb cycling use their strategies to signal to the body that there is enough food coming in but for the same end goal.

2. They Both Revolve Around Carbs

Refeeds and carb cycling both revolve around temporary increases in carbs to prevent our metabolism from slowing down, to increase leptin levels, and to encourage energy replenishment.

Leptin levels are important because leptin signals to the brain that food is coming in and that the brain no longer needs to send constant hungry signals in an attempt to increase intake.

Carbs are the main focus because they have been shown to have a larger effect on increasing leptin levels when they are consumed in larger quantities.

Related Article: 15 Cheap Carbs for Bulking (That Are Still Good For You)

Both refeeding and carb cycling also work as strategies to try and improve diet adherence by giving dieters a break from the mental strain of dieting.

Both methods provide dieters with mental relief by temporarily increasing carbs and giving them something to look forward to breaking up the monotony of low carb/calorie days, which are draining.

The two differences between refeeds and carb cycling are:

1. Refeeds Are Implemented Weekly At Most

Refeeds occur less frequently than carb cycling because they occur weekly at most, whereas carb cycling can involve daily or weekly fluctuations of carb intake.

Whereas refeeds are designed to temporarily bring dieters out of a calorie deficit to maintenance calories (the number of calories it takes to maintain weight rather than lose weight) to allow for rest and recovery.

Refeed vs Carb Cycling Cycling: Which One Produces Results?

Both refeeds and carb cycling can produce results as long as a calorie deficit is maintained because weight loss is only possible when we are in a true calorie deficit.

Carb cycling is designed to keep us in a constant calorie deficit despite having days that are higher in carbs and lower in carbs (and potentially calories as well).

My only concern with carb cycling is that we never spend time out of calorie deficit. Although weight loss occurs WITH a calorie deficit, if we spend too much time in a deficit our metabolism might slow down because our brain might believe that there are not enough calories coming in.

For this reason, I question whether carb cycling would be as effective at preventing our metabolism from slowing down and increasing leptin levels as a refeed would.

With refeeds, the goal is to bring us out of a calorie deficit to a maintenance level of calories to prevent our metabolism from slowing down.

Ultimately both refeeds and carb cycling rely on a calorie deficit for continued weight loss but with carb cycling the deficit is constant but intake is varied in hopes to keep the metabolism from slowing down.

In contrast, with refeeds, the calorie deficit is interrupted every so often to keep our metabolism from slowing down by working to prevent us from adapting to fewer calories.

The best method for achieving fat loss results is the method we can adhere to long-term because if we’re unable to follow through with the protocol that we’re choosing, we will not achieve the results we’re looking for.

Both refeeding and carb cycling are methods that can be implemented to produce weight loss results while minimizing the negative effects of dieting, but the most effective one is the one that we can adhere to long-term.

Can I Take MCT Oil On An Empty Stomach? What Not To Do

Eating Raw Spinach For Bodybuilding: Can It Help Add Muscle?