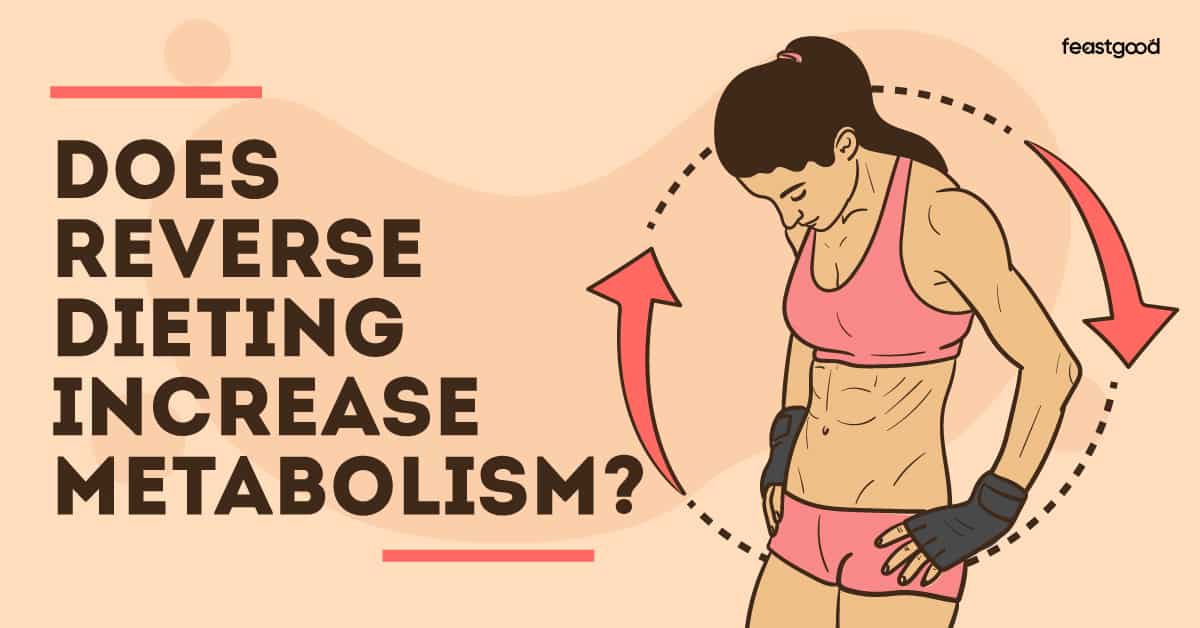 A reverse diet is a strategic increase in calories over time with the hopes of speeding up one’s metabolism to eat more food while minimizing fat gain.  However, supporting research is lacking in this area.

Before we dive headfirst into a reverse diet, it’s important to understand why a reverse diet has the potential to increase metabolism so we can use this knowledge to maximize our potential results.

A slow metabolism means that our body isn’t burning calories as fast as it normally would, which makes it harder for us to lose weight because the amount of food that we would need to eat to be in a calorie deficit would be very low.

Metabolism refers to the sum of our body’s chemical reactions that converts or use energy. The factors that play the biggest role in our metabolism are:

When our metabolism slows down NEAT and Exercise is affected the most because they are the least important in terms of maintaining the basic function, whereas BMR and TEF energy are more important.

When our metabolism slows down it is because the body isn’t getting enough energy coming in consistently so we have less energy for activity in general, so we will naturally move less and burn fewer calories.

Our metabolism is also impacted by fewer calories coming in if we get to the point where we are burning muscle mass for energy because the food we eat and our fat mass can no longer sustain us. If we start burning muscle for energy, we will decrease our ability to burn calories drastically.

This is because muscle requires a lot of calories to maintain, so if our body doesn’t have calories to spare then it will use this muscle as an energy source rather than keeping it around. When this muscle mass is gone we don’t need to allocate as many calories to it, but as a result, we are burning fewer calories and therefore decreasing our metabolism.

When our metabolism slows down it becomes really difficult to lose weight, but it is also hard to maintain weight because our current maintenance calories (the number of calories that allows us to maintain our weight) will also be lower than normal.

This makes maintaining our weight really difficult because in order to maintain our weight we need to eat a low-calorie diet, which likely isn’t sustainable long-term.

When we can no longer manage a low-calorie diet to maintain our weight, we will eventually eat more than our maintenance calories and enter a calorie surplus (eating more calories than our body needs), which will cause weight gain.

Therefore, a slow metabolism generally results in us carrying more fat mass than we’re probably comfortable with and could increase our risk of illness.

To avoid all of the issues associated with a slow metabolism, we could reverse diet to increase the number of calories our body is able to burn and allow us to return to a normal caloric intake without unnecessary fat gain.

The research suggests that there is anecdotal evidence (evidence in the form of stories that people tell about what has happened to them) that reverse dieting works. However, no current research exists verifying the effects of reverse dieting on metabolism.

The researchers claimed that:

“The results of this study suggest that slow reintroduction of calories after weight loss prevents metabolic adaptation in trained athletes.”

However, there are some limitations to this study in that there were only 2 subjects who completed the study, and the initial dieting phase was only 6 weeks long. 6 weeks probably isn’t long enough to reflect the slow down in metabolism that we would need to see the true benefits of reverse dieting.

Future research is absolutely needed to support the anecdotal evidence of reverse dieting, as is discussed in this interview with Reverse Dieting Researcher Eric Trexler.

How Does A Reverse Diet Increase Your Metabolism?

A reverse diet could increase our metabolism by:

Increasing Our Potential To Build Muscle

A reverse diet can increase our potential to build muscle because we will be consuming more calories which could be used for muscle growth.

When we’re eating at or above our maintenance, as we would be while reverse dieting, there is a much higher potential for muscle gain when we strength train.

If we’re gaining muscle then we are increasing our metabolism because the more muscle we have, the more calories we burn. This is because muscle requires more calories to sustain because it takes a lot of energy for muscle to contract.

So simply by building more muscle with the additional calories available to us, we could increase our total daily energy expenditure and therefore our metabolism.

Increasing The Energy We Have For Movement (NEAT & EAT)

When our metabolism is slow and fewer calories are coming in, our physical activity naturally declines because we don’t have the energy available to keep up with it.

But when we’re reverse dieting and gradually increasing our calories, we should notice that our physical activity increases, especially our non-exercise activity, which is oftentimes activity that we’re not even conscious of (ex: leg twitches, pacing, more steps, etc.).

Reverse dieting could also speed up our metabolism because as our food intake increases so too would the calories being expended from the thermic effect of food.

The more food we’re eating, the higher the thermic effect of food would be – especially if the additional food is protein or high fiber carbohydrates, which have the highest TEF.

Will A Reverse Diet Fix Your Metabolism?

Our metabolism is never really “broken”, it can only slow down or speed up – this is good news because it means that we can always improve our metabolism up to a certain point.

We can speed our metabolism back up by increasing the amount of food that we’re taking in, by doing this our body will recognize that more fuel is coming in and respond by increasing the number of calories it burns.

The benefit of speeding up our metabolism by reverse dieting is that we will minimize fat gain as much as possible, whereas if we were to just increase our food intake significantly right away we would likely gain much more fat mass than we’re comfortable gaining.

How To Tell If Your Metabolism Is Increasing From Your Reverse Diet?

We can tell if a reverse diet is increasing our metabolism if we are able to increase our calories without significant changes in body mass.

If we’re able to eat more calories without gaining weight then we must not be in a calorie surplus, therefore we must be eating at a maintenance level. This would mean that our maintenance calories are higher than they were initially because we are now burning calories at a faster rate.

If we’ve noticed these changes, then it is safe to say that our reverse diet is doing its job and we are increasing our metabolism.

Why Is Protein Powder So Sweet? How To Make It Less Sweet