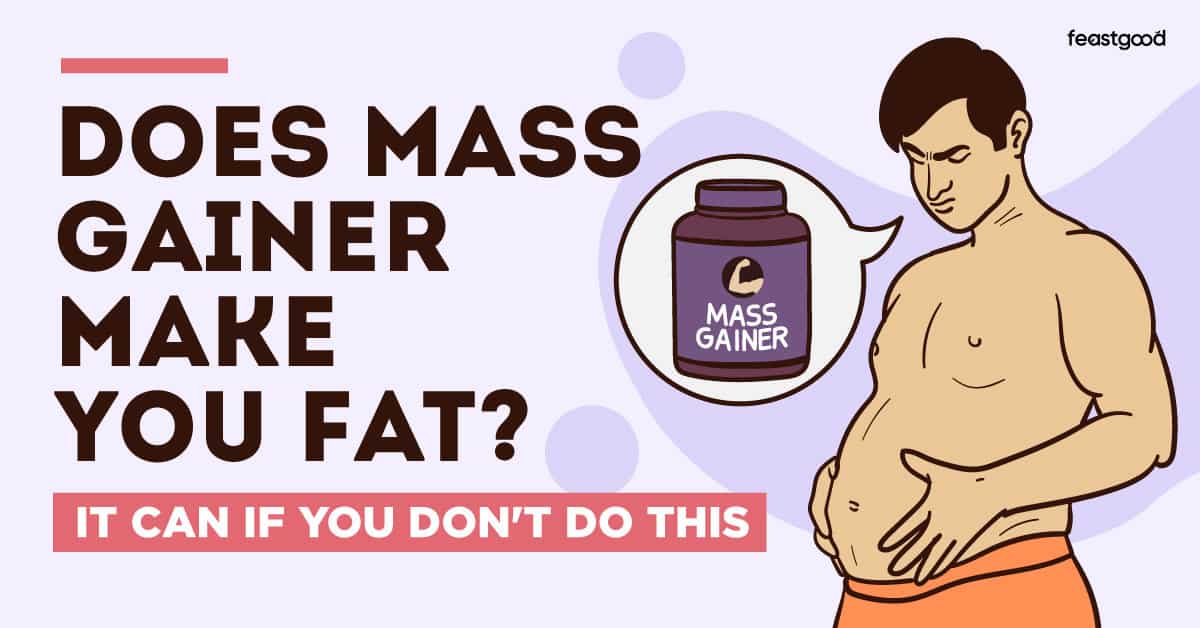 Mass gainers can be very effective for helping users to gain muscle mass, but many of my nutrition clients are concerned that mass gainers may cause them to gain more fat than muscle.

So, does mass gainer make you fat? No, a mass gainer will not make you fat, but it can contribute to fat gain if you are not mindful of your calorie intake. Excessive fat gain will only occur if you are eating in a large calorie surplus (more than 500 calories above maintenance).

Mass gainers have the potential to increase your muscle mass with minimal fat gain if used correctly, but it’s easy to use mass gainers incorrectly without the right guidance.

Mass Gainer & Fat Gain: What You Need to Know

A mass gainer itself doesn’t cause fat gain, but rather adds additional calories that need to be accounted for in your total daily calorie intake to keep you on track with your goal.

You can take mass gainer even if your goal is to maintain your weight, because as long as your overall calorie intake is equal to your maintenance calories, then you will not gain fat.

However, mass gainers are generally used by those who want to achieve a calorie surplus to add muscle mass because mass gainer is high in calories.

If your goal is to gain muscle, then a calorie surplus is necessary (combined with resistance training exercise); however, the larger your calorie surplus, the more potential there is for fat gain.

To decrease your potential for fat gain it is best to adhere to a slight surplus (eating slightly above maintenance calories).

For example, if you maintain your weight by eating 2200 calories, then a slight surplus that encourages more muscle gain than fat gain would be 2450-2700 calories per day.

If you’re already eating in a slight surplus without a mass gainer, then adding a mass gainer to the mix would put you in a larger surplus and cause you to gain excess fat.

For example, this mass gainer contains around 1280 calories in a serving so adding a serving of this to your intake would increase your surplus from 2450-2700 calories to 3730-3980 which would be a very large surplus and cause excess fat gain.

What Does Mass Gainer Do?

Mass gainer supplements help those who have a hard time eating enough calories to maintain their weight and those who struggle to eat enough to build muscle.

A mass gainer provides extra calories in the form of a powdered supplement that contains a balance of protein, carbohydrates, and fat (most mass gainers contain a higher amount of carbs compared to fat).

Whole foods are much more filling than mass gainers, so those who require a higher number of calories may not be able to eat enough whole foods to achieve their calorie goal without feeling uncomfortably full.

That said, because mass gainer makes it so much easier to consume calories, it can increase your risk of putting on fat if you’re not mindful of your intake.

5 Tips to Avoid Getting Fat While Taking Mass Gainer

Here are 5 tips to avoid excess fat gain while taking a mass gainer:

1. Stick To A Modest Calorie Surplus

The main strategy that will help to prevent excess fat gain while taking a mass gainer is to be mindful of the number of calories you are consuming in a day.

You can do this by simply factoring in the number of calories in your daily serving of mass gainer into your daily calorie allotment (250-500 above maintenance for muscle gain).

Keep in mind that the lower your daily calorie target is, the more difficult it will be to incorporate a high-calorie mass gainer into your routine.

For example, an individual with a maintenance calorie intake of 1400 calories with a surplus of 1650 calories would have a very difficult time incorporating a mass gainer that contains 1280 calories per serving, as this would only leave them with around 370 calories for the rest of the day to eat actual food.

The higher your daily calorie target is, the easier it will be to use a high-calorie mass gainer without overconsuming calories.

If you are taking a mass gainer, then you likely have the goal of putting on more muscle mass. To gain muscle mass you need to engage in consistent resistance training exercise to give your muscles a reason to grow.

An added benefit of resistance training while taking mass gainer is that it can help to reduce your risk of excess fat gain by increasing the number of calories you’re burning.

For example, if taking a mass gainer was putting you in a 600-calorie surplus but you engage in 200 calories worth of exercise every day, then it would even out to a 400-calorie surplus which would significantly reduce the potential of fat gain.

3. Consume Your Mass Gainer Closer To Your Workout

To better utilize the high amount of carbohydrates in mass gainers, I recommended that you take it in the hours closest to your workout.

Taking your mass gainer within 3 hours after your workout is most beneficial for reducing fat gain because the quick dose of carbohydrates and protein will help to replenish and repair your muscles that were depleted during your training session.

When taken at other times during the day, the calories and macronutrients in a mass gainer may not be utilized as effectively and efficiently, especially if you are more sedentary at these times of the day.

With that said, as long as you are staying within your calorie and macronutrient targets for the day, taking your mass gainer away from your workout will not hinder your progress.

If you are worried about excess fat gain while taking a mass gainer, I would recommend starting out with smaller servings or choosing a mass gainer that isn’t as high in calories.

For example, while this mass gainer contains a whopping 1280 calories, you could start with ½ a serving which would only be 640 calories. You could also start with a mass gainer that is not as calorie dense, like this one, which only has 650 calories per serving or 325 for a ½ serving.

This will help to ensure that you aren’t eating drastically over your maintenance calories, especially for those who aren’t tracking their intake.

If you’re not tracking then you might not know that your mass gainer is putting you into a large surplus until you start to see unexpected rapid fat gain.

Starting with a smaller serving allows you to monitor for changes in your body weight and to adjust your serving accordingly, without having to track your calories or macros.

In addition to taking a mass gainer, it is important to make sure that you are also eating plenty of whole foods that contain adequate amounts of fiber.

Fiber, found in whole foods, will keep you feeling full and satisfied throughout the day and keep you from overconsuming calories.

This is important because mass gainer is not satisfying, so it can provide you with plenty of calories and still leave you feeling hungry. If you’re still hungry, then you’re more likely to reach for more food to fill you up which would increase your calorie intake even further.

Be sure to prioritize whole foods along with your mass gainer to avoid excess fat gain and increased satiety.

Are Certain Types of Mass Gainers Worse for Fat Gain?

When it comes to choosing a mass gainer, I recommend looking at the ingredients and avoiding products that have unnecessary amounts of added sugars and fillers (such as maltodextrin, artificial colors and flavors, or preservatives), which decrease the quality of the product.

For example, a vast amount of mass gainer supplements utilize maltodextrin as a primary source of carbohydrate, which can be problematic for many individuals and potentially cause digestive issues when ingested in large amounts.

In addition to this, maltodextrin has the potential to cause drastic spikes in your blood sugar. Ingesting a large amount of maltodextrin without any fiber can cause large increases in blood sugar and potentially lead to insulin resistance, increasing your likelihood of excess fat gain.

For these reasons, it is best to look for a mass gainer that does not use excess sugar or ingredients that provide low-quality carbohydrates.

Instead, you could opt for Crazy Nutrition Mass Gainer which doesn’t contain maltodextrin, and instead incorporates gluten-free oat flour and sweet potato flour as its main source of carbohydrates.

We recommend Crazy Nutrition Mass Gainer as the #1 Mass Gainer for its natural ingredients and digestive enzymes.

In addition to this, the Crazy Nutrition Mass Gainer also contains digestive enzymes which can be extremely beneficial to help your body digest such a large number of calories at once.

The Other Problem with Mass Gainers

If you are consuming mass gainers regularly, here are other considerations to be aware of:

While a mass gainer can be helpful with providing extra calories in a bulking phase, they should not be a replacement for eating real whole foods because they lack many of the essential vitamins and minerals that you need for your health.

If you are overconsuming a mass gainer and neglecting whole foods, this could potentially lead to deficiencies in the body that could lead to more serious health problems over time.

For example, an individual with a calorie requirement of around 4000 calories per day could take a serving of mass gainer during the day that contained 700 calories, which would be around 17.5% of their total daily calories.

For example, a scoop of mass gainer that contains around 695 calories, 9 grams of fat, 100 grams of carbs, and 52 grams of protein is the same as eating around 6 oz of chicken breast, 2.25 cups of basmati rice, and 2 cups of broccoli.

The whole food meal of chicken, rice, and broccoli will take longer to digest and contribute to feeling full and satisfied compared to the mass gainer meal.

However, for certain individuals, this could be seen as a benefit.

For example, if you are someone who is trying to gain weight but cannot seem to eat enough calories through whole foods alone, then getting a significant amount of calories through a mass gainer shake that isn’t as filling will be extremely helpful.

3. Mass Gainers Could Cause Digestive Issues

In addition, mass gainers can also contain an excess of processed ingredients, thickeners, and artificial sweeteners which can be tough for certain people to digest.

Some people might even experience digestive upset from taking a mass gainer simply because their body is not accustomed to having to digest such a large number of calories at one time.

If you are someone with a sensitive stomach and temperamental digestion, then you might be better off getting your extra calories from whole foods,

If you want to try making your own mass gainer shake at home using mostly whole food ingredients, check out my 5 Weight Gain Recipes.

How Much Is Noom? (Plus, How To Get Noom Cheaper)

Do Mass Gainers Work? What The Science Says