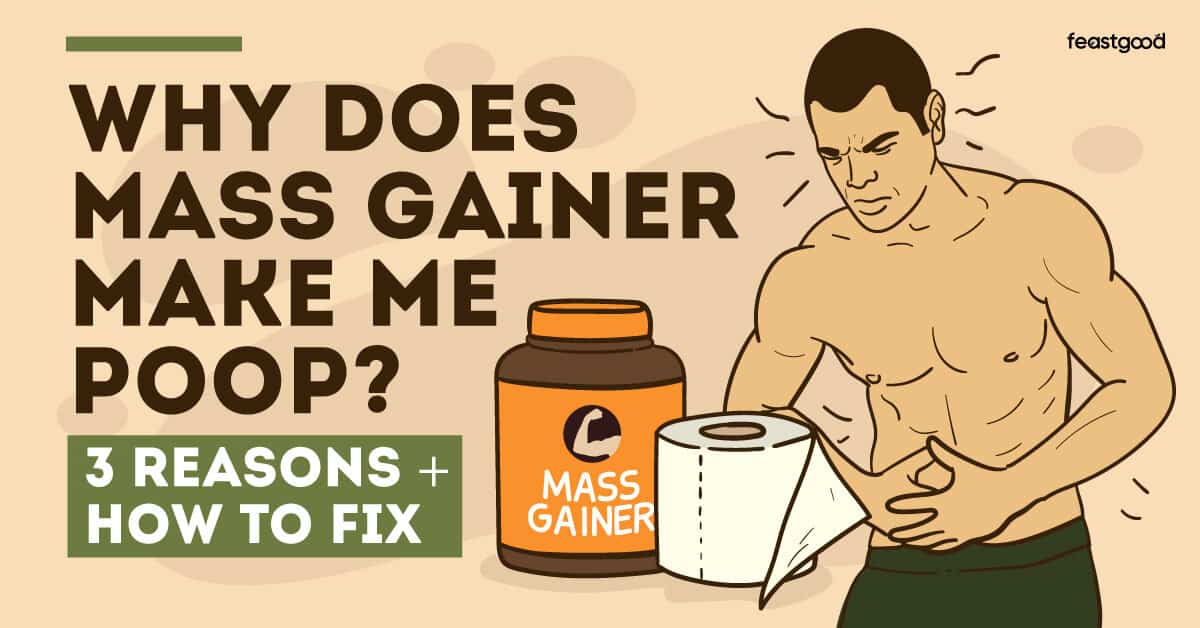 For certain individuals, taking a mass gainer can result in urgent trips to the bathroom mid-workout. If this is something you have experienced, you might be wondering why it happens, and how to fix it.

Mass gainers can make you poop since they are high in liquid calories, and can be difficult for your stomach to process all at once. Certain mass gainers also contain ingredients that have the potential to irritate the stomach, which may result in diarrhea.

If you are concerned that taking a mass gainer will have you sprinting to the toilet, don’t worry, there are steps that you can take to reduce the likelihood of your mass gainer making you poop.

3 Reasons Mass Gainer Can Make You Poop & How To Fix

1. Mass Gainers Contain Ingredients That Can Irritate Your Stomach

There are a few ingredients in mass gainers that can cause digestive issues, but the most common culprits are creatine and artificial sweeteners.

Creatine has been shown to cause digestive issues when taken in larger quantities (>10g at a time), so if you’re having multiple scoops of mass gainer at one time which totals more than 10g of creatine then this could be causing issues.

Unfortunately, artificial sweeteners can be disruptive to the gut microbiome and are a common cause of diarrhea in individuals with sensitive stomachs.

How To Fix: Choose a Mass Gainer With Minimal Added Ingredients

If you suspect that the presence of creatine or artificial sweeteners in your mass gainer is what’s causing your frequent poops, try switching to a mass gainer without these ingredients.

I recommend Naked Nutrition’s Naked Mass (click to read my review). This mass gainer supplement contains extremely simple ingredients and does not add any artificial sweeteners or creatine to its formula.

The entire premise behind taking a mass gainer is to ingest a higher number of calories at one time to make it easier to gain weight.

However, overloading your stomach with such a large number of calories in a short period of time could potentially be too much for your stomach to handle, which can result in digestive upset.

It’s not uncommon for mass gainers to have 1000 calories or more per scoop, which is a ton of calories for your body to digest at one time.

A very simple and easy way to combat this potential issue is to take your mass gainer in smaller amounts more often throughout the day to help ease the burden on your stomach.

For example, instead of taking a full serving of mass gainer at one time, you could try splitting it up into 4 doses throughout the day, which would mean your stomach only has to digest around 250 calories of mass gainer rather than 1000 calories at one time.

This way you’re still consuming the same number of calories to encourage mass gain but you’re doing it in a way that is less likely to cause digestive issues.

While ingredients like lactose and gluten won’t be a problem for everyone, they are common allergens for those who have food sensitivities and can result in digestive issues and frequent bathroom trips.

Lactose is a sugar that is present in milk and can be difficult to digest for those who are lactose intolerant and lack the digestive enzyme lactase.

Roughly 65% of the population has a reduced ability to digest lactose, which can result in uncomfortable digestive symptoms including increased bowel movements and diarrhea upon consumption.

Additionally, mass gainers are extremely high in carbohydrates and sometimes use carb sources that contain gluten (a protein that is found in wheat and grain products) to achieve this higher carb content.

How To Fix: Switch To a Brand That is Free of Common Allergens

If the presence of these common allergens is problematic for your digestion, they can easily be avoided by simply shopping for a brand that does not contain these ingredients.

For example, if you have trouble with dairy and lactose, you can try using a brand of mass gainer that contains plant-based protein.

I recommend Naked Nutrition’s Vegan Mass Gainer which has peas and brown rice instead of whey.

Similarly, if you have issues with gluten, then choosing a gluten-free brand of mass gainer like Transparent Lab’s Mass Gainer could help to mitigate any digestion issues that you are experiencing.

This particular mass gainer utilizes carb sources such as tapioca maltodextrin, oats, and sweet potato instead of grains that contain gluten.

Is It Bad If You Poop A Lot After Taking Mass Gainer?

With that said, if it is negatively impacting your quality of life by causing frequent bouts of diarrhea, uncomfortable gas, bloating, or constipation, then it might be worth switching brands or taking smaller servings.

Is Mass Gainer a Waste if You Poop After Taking It?

Even if you poop immediately after taking your mass gainer, your body is still likely absorbing the calories in your supplement, which means it’s not going to waste.

However, if you are having frequent bouts of diarrhea, then you’re less likely to absorb it and it could be causing mild dehydration.

Prolonged diarrhea causes the body to lose more fluid than you are taking in, which results in the body becoming dehydrated and in severe cases can be quite dangerous.

It is important to stay hydrated if you notice your mass gainer is causing you to have diarrhea, and to switch up your brand of supplement or decrease the quantity that you are consuming if the diarrhea continues.

If you are looking for a mass gainer that is less likely to cause diarrhea or digestive upset, then choosing a brand that does not contain ingredients like lactose, gluten, or added ingredients such as creatine and artificial sweetener is your best option.

This is a great option for those who want a supplement that is straight to the point and avoids unnecessary fillers.

The Transparent Labs Mass Gainer is a great option for those who can tolerate lactose or dairy but are looking for a mass gainer that does not contain gluten, artificial sweeteners, or creatine.

This particular brand is superior to others on the market because it does not contain any artificial coloring or preservatives, and is also third-party lab tested.

This means that you can have confidence that what is listed on the label is exactly what you are consuming.

Why Do Mass Gainers Cause Diarrhea?

Can Mass Gainer Cause Constipation?

What Are the Side Effects of Mass Gainer?

While taking a mass gainer supplement can provide many benefits, for certain individuals it can result in negative side effects. These side effects include unwanted weight gain, blood sugar dysregulation, and digestive issues such as stomach cramps, gas, bloating, diarrhea, and constipation.

Do Mass Gainers Make You Fart?

Mass gainer supplements can cause increased flatulence, particularly for those who are sensitive to ingredients like lactose or artificial sweeteners. To avoid this, you can choose a mass gainer that does not contain dairy or artificial ingredients.

Does Creatine Make You Tired? Causes & How To Fix