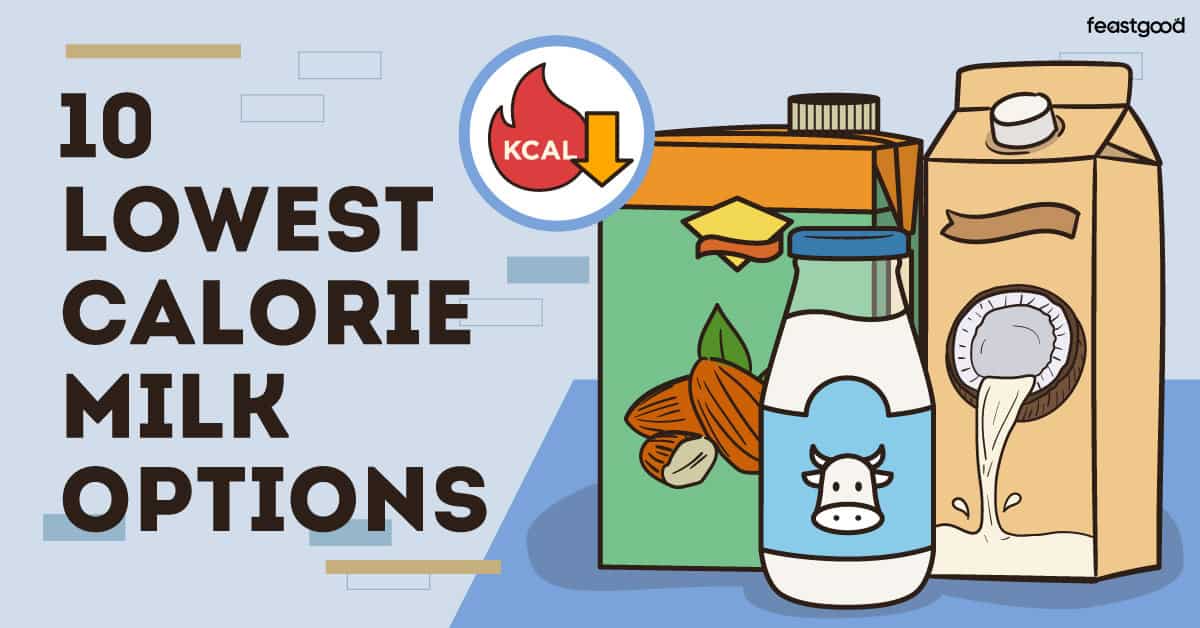 I always tell my clients that one of the easiest ways to lose weight is to stop drinking so many calories, which is a big part of why I am often recommending low-calorie milk alternatives.

In addition to being low-calorie, most milk alternatives also have the added benefit of being completely lactose-free. As an estimated 68% of the world’s population is lactose intolerant, milk alternatives are becoming more popular every day.

What Is Considered a Low-Calorie Milk?

An 8oz cup of whole cow’s milk contains 150 calories and the same 8oz serving of goat’s milk has 140 calories. As a nutrition coach, I consider low-calorie milk to be a milk product that contains 100 calories or less per serving.

Due to lactose intolerances and a desire for something other than cow’s milk, several different milk products have hit the market in recent years. It’s not uncommon to see milk derived from oats, peas, nuts, rice, and other grains lining the shelves of your local grocery store.

While some of these products – like hemp, soy, and rice milk – are quite high in calories, there are others – like almond, cashew, and coconut milk – that contain less than half the calories found in cow’s milk.

Why Do the Calories in Milk Matter?

The calories in everything you consume matter, not just the calories in milk, because calories help you either increase, decrease, or maintain your body weight.

When counting calories, people often forget to include the calories in the beverages they consume. But calories from something like milk are just as important to track as the calories on your plate.

If you are trying to lose weight, switching from a cup of whole milk to a cup of unsweetened almond milk will remove 125 calories from your meal.

If you are drinking milk or adding it to coffee, cereal, smoothies, or shakes, switching from high-calorie milk to low-calorie milk can be an easy way to remove calories from your diet.

The top 10 lowest calorie milk are:

Almond milk is made by blending almonds and water, then straining the mixture. This strained liquid is called almond milk.

Almond milk contains the least amount of calories of any milk alternative and remains a good source of calcium (approximately 23% of your recommended daily value in 8oz).

This plant-based milk alternative is also cholesterol and lactose-free. However, it is very low in protein (1g of protein/cup). Almond milk is great if you are looking for a milk substitute for your cereal, smoothies, or coffee but, unlike cow’s milk, it cannot be viewed as a source of protein.

Cashew milk is made by blending cashews with water and straining the mixture.

Cashew milk is nearly identical to almond milk in every aspect. The main difference between cashew and almond milk is the taste – cashew milk has a slightly stronger, earthy flavour.

Coconut milk is made by mixing grated coconut with hot water and pressing the liquid through a cheesecloth.

Coconut milk has a consistency similar to cow’s milk but is used mostly in cooking. It has a strong coconut flavor and no protein. If you are looking for a lactose-free milk alternative for soups, curries, or stews, coconut milk can be a good option.

Flax milk is made by blending flax seeds with water and straining the mixture.

Macadamia milk is made by soaking macadamia nuts in water for several hours, then blending and straining the mixture.

High in protein (8g/cup) and low in fat (0g/cup), skim milk is a fine choice for someone looking to add protein and carbohydrates to their diet.

However, as many individuals struggle to digest lactose, skim milk is simply not a feasible option for some. This high prevalence of lactose intolerance is a big part of why we see so many milk alternatives on the market.

Pea milk is made by grinding yellow split peas into flour, separating the protein from the starch and fibre. This pea protein is then blended with water and strained.

It is also creamier than most nut milks, making it one of the most cow’s-milk-like substitutes available.

What Kind of Milk Has the Least Calories?

What is the Healthiest Type of Milk for Weight Loss?

Which Alternative Milk Has the Least Calories?

Unsweetened almond and cashew milk both have only 25 calories in an 8oz glass, making them the milk alternatives with the least calories.

What Low-Calorie Milk Has The Most Protein?

What Low-Calorie Milk Has The Least Carbs?

Unsweetened almond, cashew, and coconut milk have the least amount of carbohydrates with just 1g of carbs per 8oz cup each.

Riley Nadoroznick is a strength, conditioning, and nutrition coach and the owner of Conviction Fitness.

Whey Protein vs Meat: Which Is Better? (Science-Backed)