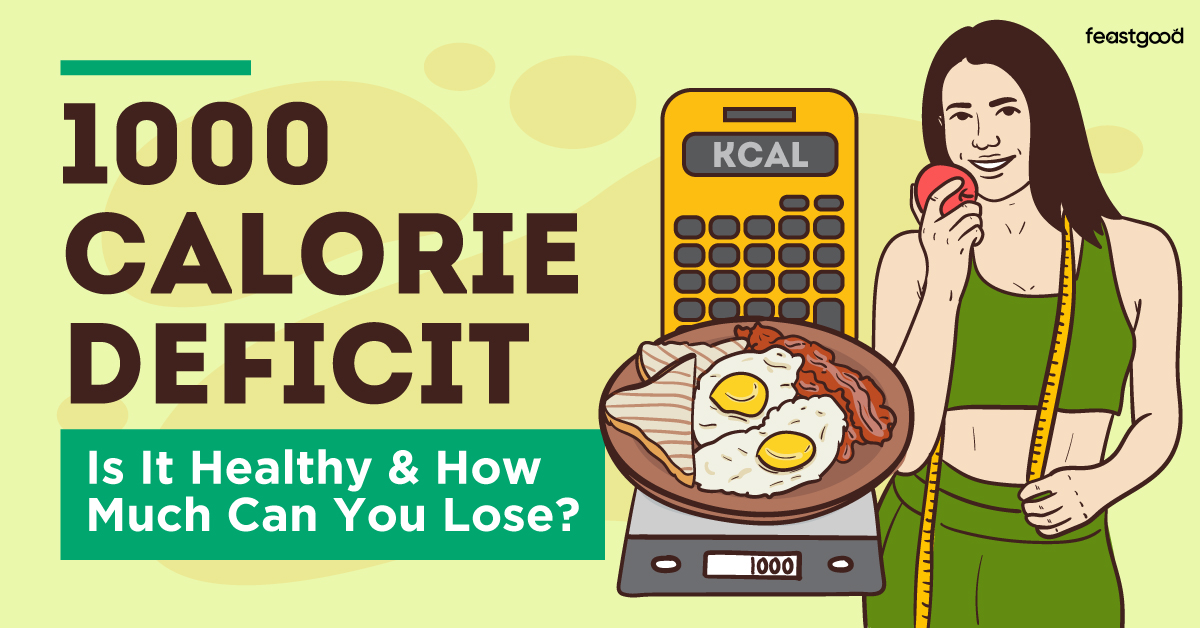 A 1000-calorie deficit will help you to lose weight rather quickly, but it may not be worth it in the long run if you want to keep the weight off and be your healthiest self.

Before you make a decision about whether to try a 1000-calorie deficit, it’s important to understand what it might be like, what results to expect, and if it’s really worth it.

What Does A 1000 Calorie Deficit Mean?

A 1000 calorie deficit means that you are eating 1000 calories less than your body needs to maintain its weight every day, which would encourage weight loss.

Is A 1000 Calorie Deficit Healthy?

Your body always does best when it can adapt gradually to changes that are made because when you make larger adjustments it will always have an effect on your metabolism (the rate at which you burn calories).

If you were to go from eating at maintenance to a 1000-calories deficit, then your metabolism would slow down significantly to ensure that the calories you are consuming are reserved for basic bodily functions.

If your metabolism slows down, then you’re burning fewer calories and weight loss actually becomes very difficult over time.

In addition, a 1000 calories deficit would almost certainly result in a decrease in muscle mass because muscle costs your body a lot of energy.  So when energy is limited because calories are severely restricted, your body is more likely to get rid of muscle than to preserve it.

If you’re eating so little that your body decides to ditch muscle mass and preserve calories just so you can support bodily functions, then I think it’s fair to say that a 1000-calorie deficit isn’t healthy.

Should You Use A 1000 Calorie Deficit?

A 1000-calorie deficit isn’t healthy,  but that doesn’t mean that it doesn’t have its place.

A 1000-calorie deficit could be beneficial for those who are competing in a bodybuilding competition and need to be as lean as possible. To be competitive on stage at a bodybuilding show, you do have to go to extreme lengths by drastically reducing your calorie intake.

Although it’s unhealthy to do so, the decrease in calories to this extent is temporary and for a very specific purpose. Those who compete in bodybuilding are aware that being that lean isn’t healthy or sustainable long-term but it is part of the sport.

Other than bodybuilding, there is likely no other reason for someone to get to the point where they’re in a 1000-calorie deficit.

If you’re dieting just to feel better in your body, or to get “lifestyle lean” you shouldn’t get to the point where you’re in this deep of a deficit because it would take a long time to build your metabolism back up from this.

If you try a 1000-calorie deficit and aren’t able to maintain it, then you’ll actually put on weight rather than lose it in the long run, which probably isn’t your goal.

This is because when you try to diet on such low calories, your metabolism will decrease meaning that you won’t burn calories as readily, so when you aren’t able to stick to this low-calorie diet anymore and you eat more than a 1000-calorie deficit, you will gain fat more easily.

An example of this is the contestants from “The Biggest Loser” a TV show where the goal is to lose as much weight as possible in a short timeframe. The contestants lost weight rapidly by using an intense calorie deficit but ended up putting all the weight back on and more when they couldn’t adhere to it anymore.

What Can You Expect Being On A 1000 Calorie Deficit?

When you’re in a 1000-calorie deficit you can expect to experience an array of symptoms, some positive and some negative.

In my opinion as a Nutrition Coach, the pros do not outweigh the cons, no matter how fast you want to lose weight.

How To Achieve A 1000 Calorie Deficit

Let’s say you’re someone who understands the adverse effects of eating a 1000-calorie deficit but decide you’d like to do it anyways.

Below, I’ll share how to structure a 1000-calorie deficit.  But, here’s my advice before starting:

Now that you know the ground rules, here’s how to achieve a 1000-calorie deficit.

To achieve a 1000-calorie deficit you first need to know what your maintenance calories are, which you can determine by tracking your calories for a week.

By tracking your calories you can see exactly how much you’re consuming on average and how this is affecting your body weight. If after a week you see that you’re maintaining your weight, then your weekly average calories are your maintenance calories.

If you need a calorie tracker, I highly recommend MacroFactor.  You can check out my review of the app and why I think it’s the best on the market right now

Once you’ve found your maintenance calories you can gradually start decreasing your calories by 200 to 500 calories at a time depending on how aggressive you want to be.

Then you should adhere to this new intake for at least a week before making another 200 to 500 calorie decrease.

My recommendation is that you decrease your calories as little as possible to see how your body responds, because if you don’t need to make an aggressive decrease to see progress then there’s no point in doing so.

The more quickly you get to a 1000-calorie deficit, the more you’ll experience the symptoms above. The more gradually you decrease your calories, the better off you’ll be.

As you go through this gradual process of decreasing your calories, you’ll need to monitor your symptoms accordingly.

If you start to experience extreme hunger and fatigue, you should stop dropping calories immediately, and begin a reverse diet.

A 1000 calorie deficit is too much for most people because it’s so hard to adhere to because it’s such a low intake compared with where your body wants to maintain its weight.

With such a large deficit there is an increased risk of binge eating, which is an uncontrollable urge to eat because when you’re extremely restricted your body and mind start to crave food so intensely that it can cause you to have episodes of controlled eating.

Even if you are able to stick to a 1000-calorie deficit initially, when you can’t adhere to it any longer you can’t just go back to your previous maintenance calories without gaining a ton of weight.

This is because your metabolism will have adapted to surviving on lower calories by slowing down the rate at which you burn calories, so when you try to eat more than your 1000-calorie deficit you will gain a significant amount of weight if you don’t reverse diet.

So you see, it’s not as simple as doing a 1000-calorie deficit, and then “going back to normal” right away afterward. Partaking in such a large deficit requires lots of preparation, thought, and planning before and after your cut.

Is A 1000 Calorie Deficit Worth It? My Practical Advice

I don’t believe that a 1000-calorie deficit is worth it for anyone but competitive bodybuilders because you can achieve better weight loss results that you can actually maintain with a much smaller deficit.

A 200 to 500 calorie deficit is probably much better for you in the long run because it won’t slow down your metabolism as much, you won’t be as hungry, and you’ll probably be able to adhere to it for longer periods which will produce better results.

The negative side effects of a 1000-calorie deficit aren’t worth it if it means sacrificing your health and reducing your quality of life.

Those who compete in bodybuilding should know what they’re doing, know the time frame that they have to spend in this deep of a deficit, and have a detailed plan on how to reverse diet back out of this deficit to speed their metabolism back up after the fact.

How Much Weight Can You Lose With A 1000 Calorie Deficit?

A 1000-calorie deficit probably isn’t life-threatening; however, it certainly isn’t healthy because it could encourage binge eating, low energy, hormonal dysfunction, and loss of muscle mass.

Will You Lose Muscle On A 1000 Calorie Deficit?

The chances of you losing muscle on a 1000-calorie deficit are quite high because this deficit is so aggressive that your body will likely start preserving energy for basic functions and muscle costs your body a lot of energy, so it’s easier for your body to ditch it.

Can You Stick To A 1000 Calorie Deficit Long Term?

A 1000-calorie deficit is not sustainable long-term because you will have no energy, you will be very hungry, and you will gain weight very easily eating very few calories because your metabolism will be so slow.

How Long Should You Bulk? 3 Factors To Consider