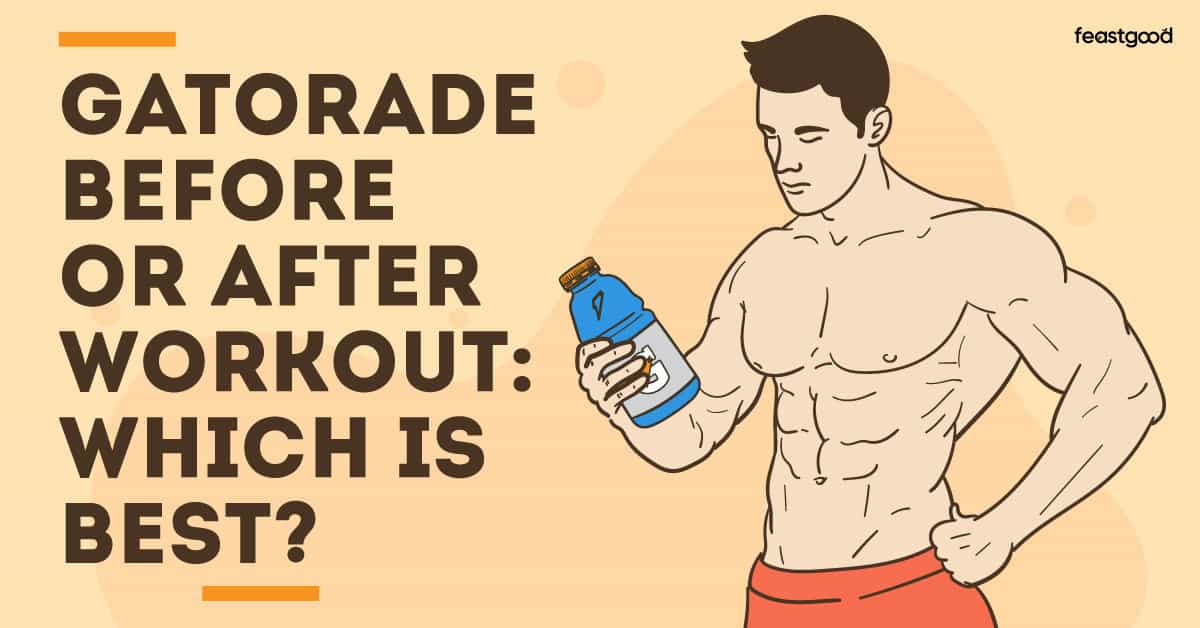 Gatorade is one of the most popular hydration products on the market; however, whether it’s better before or after your workout is up for debate.

In this article, I’ll explore the controversy around when to drink Gatorade and discuss:

The Debate Around When to Drink Gatorade

Although Gatorade is used by little league players and professional athletes alike, there is still a big debate about when this sports drink is most beneficial: pre-workout or post-workout.

People debate on internet forums and gyms around the world when or even if you should consume sports drinks like Gatorade.

The Facts – What Is Gatorade?

Gatorade was manufactured as a sports nutrition beverage that contains water, carbohydrates (in the form of different sugars), and electrolytes (sodium and potassium).

The carbs in Gatorade are beneficial for sports nutrition because they are your body’s preferred fuel source. Consuming fast-digesting carbs around your workout provides fuel for training and helps replenish energy stores to promote recovery.

The electrolytes in Gatorade are also beneficial because they’re essential minerals that your body relies on for many key functions. Sodium and potassium, for example, are both used to help your muscles contract and relax.

The more intense your workout and the hotter the workout environment, the more important it is to stay hydrated with water and electrolytes.

Gatorade was designed with a specific combination of carbohydrates, fluids, and electrolytes to encourage optimal performance. But you need to consume these ingredients at the right times to get the most out of them.

The Debate – Before Or After A Workout?

Some folks believe it’s best to drink Gatorade before a workout. They feel it helps you “top up” on electrolytes and carbohydrates, providing you energy for the work ahead.

Others feel it makes more sense to drink Gatorade after a workout to replenish the water, electrolytes, and carbohydrates that were just lost to promote a faster recovery.

The Other Debate – Gatorade Or Water?

Another debate on the internet is if Gatorade is actually beneficial for performance or if it’s just a marketing scam.

Some think Gatorade and sports drinks are nothing but a scam and that it has been popularized by the millions of dollars spent on marketing it.

They claim that water is a superior option and that Gatorade is just flavored sugar water that does nothing to increase your performance.

Others, however, swear by Gatorade and won’t workout without it.

If you’re a bodybuilder specifically, I wrote a separate article on Is Gatorade Good or Bad For Bodybuilding?

Will Gatorade ACTUALLY Improve Workout Results? What The Science Says

There are mixed results in studies focused on drinking Gatorade or consuming carbohydrates before endurance training.

A study published in the International Journal of Sports Medicine suggests consuming carbohydrates before a workout allowed participants to run longer.

But, in a study conducted at the University of North Dakota, researchers found no difference between swimmers who consumed carbohydrates before practice and those who consumed a placebo.

Takeaway: More research is definitely needed to make any conclusions about the effect of Gotrade on endurance training.

When it comes to resistance training, there is little data to review.

In one study conducted at Oregon’s Linfield College, participants were able to squat more reps with 75% of their one rep max when they consumed a carbohydrate bar versus a bar high in fats 45 minutes before their workout.

However, this study did not use a placebo or control group, and we don’t know the cause or effect – did the carbohydrate meal improve performance, or did the high-fat bar hinder it?

It’s more likely that the high fat bar negatively impacted performance because a high fat intake before a workout can affect digestion, which in turn would affect your performance; however, we can’t say for sure.

What the research does tell us, is that consuming simple carbohydrates like Gatorade during a workout increases muscle glycogen stores, which improves training adaptations, and that Gatorade helps keep you stay more hydrated than water.

Additionally, science suggests consuming plenty of carbohydrates after a workout facilitates muscle-damage repair and reconditioning. The simple carbohydrates in Gatorade make this easy to accomplish with 36 grams of carbs in a 20-oz serving.

What Does Gatorade Do Before A Workout? And Is It Good?

In theory, drinking Gatorade before exercising gives your body glucose (energy) it can quickly use to fuel your workout and ensures you are well hydrated. However, the science is not clear as to how much benefit there is to Gatorade compared with regular eating and drinking practices.

A study published in the Serbian Journal of Sports Sciences suggests drinking Gatorade 20 minutes before exercise delays fatigue and improves performance. However, both the Gatorade-consuming and placebo-consuming groups in this study fasted for 12 hours beforehand.

If you have not eaten or drank anything in the hours leading up to your workout, drinking Gatorade beforehand can help you perform better during the workout.

But, beyond that, there is no clear evidence as to whether or not drinking Gatorade before a workout is beneficial.

What Does Gatorade Do During A Workout? And Is It Good?

Drinking Gatorade during a workout helps to reduce and delay fatigue by replenishing carbohydrates, water, and electrolytes as you exercise. Replenishing these stores as you lose them is beneficial because it allows you to train a little harder for a little longer.

Drinking water is good for general hydration, but drinking a carbohydrate-and-electrolyte-filled sports drink like Gatorade allows for better exercise performance.

There’s a term in the endurance world known as “bonking.” Bonking is when you’ve gone too hard or too long without replenishing your carbohydrate (glycogen) stores or restoring lost electrolytes.

When you bonk, you hit a figurative wall – no matter how hard you push, you just can’t go because you’re out of gas and your tank is empty. Drinking Gatorade during endurance activity, like a long bike ride, helps prevent this bonking.

However, the same thing can be said for resistance training. When you drink Gatorade during an extended, intense workout, it allows you to complete an extra few reps or sets later on in your workout. This is great, because the more sets and reps you do, the more your muscle will grow.

What Does Gatorade Do After A Workout? And Is It Good?

After a workout, Gatorade replenishes the water, electrolytes, and carbohydrates that have been depleted while exercising. This is good as it helps prevent dehydration – which impairs physical and mental performance – and helps prepare you for your next workout by replenishing your glycogen stores.

However, not every session requires a post-workout Gatorade. The International Society of Sports Nutrition recommends consuming a carbohydrate-electrolyte solution such as Gatorade only if exercise lasts longer than 70 minutes.

Though the research is somewhat mixed on how Gatorade will affect your workout results, there appear to be a few situations where drinking Gatorade can definitely have positive or negative consequences.

Drink Gatorade After An Intense Workout Longer Than 70 Minutes

If you are exerting yourself for more than 70 minutes and losing a lot of sweat, drinking Gatorade after your workout will replace the fluids, electrolytes, and glycogen you lost while exercising.

That being said, make sure that those 70 minutes spent working out are at least moderate-intensity because if you were simply hanging around the gym for 70 minutes, texting and scrolling between sets, then you probably don’t need a Gatorade for recovery purposes.

Workouts like these typically include tempo or speed work while cycling or running. However, you may also want to sip Gatorade during an intense, fast-paced gym circuit or cross-training metabolic conditioning session.

Anytime you’re working out at intense levels and want to sustain that effort for a longer period, you would benefit from the hydration and carbs that Gatorade offers.

Gatorade can provide you with the carbohydrates and fluids needed to perform well during your workout if you’re underfed or dehydrated.

Drink Gatorade After A Workout If You Aren’t Hungry

If you struggle to eat after a workout, drinking a 20 oz Gatorade will help you recover and replenish your glycogen stores quickly by providing you with 35 grams of carbs.

Drinking Gatorade is a good way to consume post-workout carbohydrates if you don’t feel hungry after a workout. However, to truly maximize Gatorade as a post-workout beverage, you should add protein to encourage muscle damage repair and growth.

You can boost the protein content of Gatorade by mixing it with protein powder. My favorite Gatorade and protein powder combination is Orange Gatorade and a scoop of Vanilla Whey Protein, which makes a creamsicle-inspired post-workout shake that’s easy to digest.

If you’re not a creamsicle person, then opt for an unflavored whey to add to your Gatorade; you won’t even know it’s there, but it’ll provide you with 20 to 30 grams of protein, depending on the brand you use.

Can Gatorade Be A Pre-Workout Substitute?

Gatorade is non-caffeinated and lacks ingredients like beta-alanine and nitric oxide that increase focus, alertness, and energy. Therefore, it should not be used as a pre-workout substitute.

Mixing Gatorade with whey protein makes for a great post-workout shake as it provides fast-absorbing protein and carbohydrates, which is exactly what you need after a workout to encourage recovery and muscle growth.

Should You Drink Gatorade While Workout Out?

You should only drink Gatorade while working out if you are working out intensely, or you’re working out for 70 minutes or longer. Drinking Gatorade during short, less intense workouts isn’t necessary for performance or recovery.

What To Read Next:

Riley Nadoroznick is a strength, conditioning, and nutrition coach and the owner of Conviction Fitness.

Can Protein Shakes Make You Nauseous? (Yes, Here’s Why)

Do Protein Shakes Cause Constipation? (Causes & How To Fix)