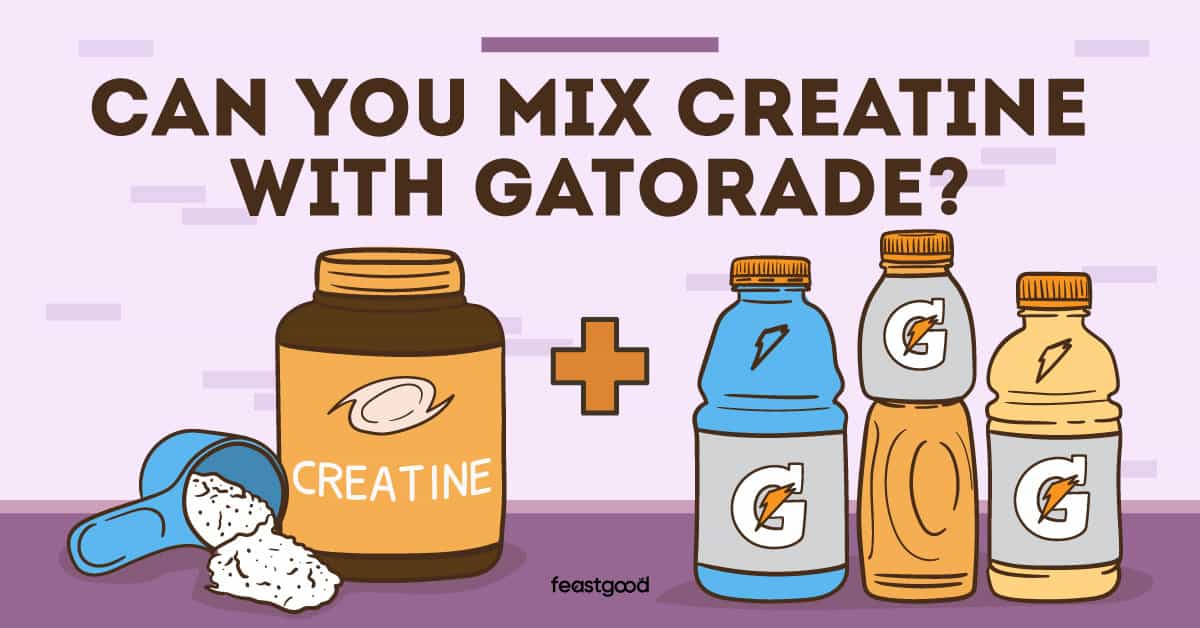 Creatine and Gatorade are both staples in many athletes’ diets.  So it may be worth combining them to get the best of both worlds.

Although creatine and Gatorade can be mixed together, it’s important to consider whether the benefits outweigh the drawbacks, and if it’s something you should do everyday or if it’s better every once in a while.

Benefits of Mixing Creatine With Gatorade

One benefit of mixing creatine with Gatorade is that it helps to keep you hydrated, which is helpful because when supplementing with creatine it’s especially important to stay hydrated.

The Gatorade helps you to stay hydrated because it contains water and electrolytes, which work together to maintain water balance in your body.

Although it was previously believed that creatine causes dehydration, studies have shown that this isn’t true. However, staying hydrated is still important for exercise performance so mixing creatine with Gatorade is a great option.

Being even slightly dehydrated can severely impact your exercise performance, so it’s best to drink fluids throughout the day leading up to your workout, and during your workout.

Another benefit of mixing creatine and Gatorade is that it provides you with energy for your workouts because the sugar in Gatorade can absorb quickly to provide you with energy at a faster rate.

When you need energy quickly, like before a workout, sugar is the best option because it absorbs at a faster rate into the bloodstream providing almost instant energy.

Additionally, it also reduces any digestive issues that would normally come from eating a slower digesting carb like whole wheat bread or oats, which makes it a great option right before a workout or even during a workout.

Drawbacks of Mixing Creatine With Gatorade

Gatorade Is High In Sugar

One of the only drawbacks of mixing creatine with Gatorade is that Gatorade is high in sugar with 36 grams in a 20 oz bottle, which exceeds the recommended amount of daily sugar consumption.

Although a higher sugar intake every once in a while isn’t an issue, if you’re mixing creatine and Gatorade daily then it could have consequences.

A high sugar intake can increase your risk of diabetes, obesity, high blood pressure, and other health issues.

If you’re planning on mixing creatine with Gatorade more often, then you should consider buying Gatorade Zero, which is a sugar-free version of Gatorade.

Creatine & Gatorade: When To Consume It

Mixing creatine and Gatorade has multiple benefits, but these benefits are better captured when you consume this mixture at certain times.  Let’s take a look at a few scenarios below.

Is Creatine Mixed With Gatorade Good for Pre-Workout?

Creatine mixed with Gatorade is the perfect pre-workout option because the carbs in Gatorade are fast-digesting, which will provide an instant energy boost.

The fast-digesting carbs in Gatorade and the strength, power, and cognitive benefits of creatine make this mixture an excellent pre-workout option to enhance your overall workout performance.

Is Creatine Mixed With Gatorade Good for Post-Workout?

Creatine mixed with Gatorade is still a good option post-workout because the carbs in Gatorade will replenish your energy stores that were depleted while working out, but it’s not as beneficial as it would be pre-workout.

After a workout, your energy stores will be low so the carbs in Gatorade are beneficial; however, you would also need to pair the creatine and Gatorade mixture with a source of protein.

Protein is important post-workout so that you’re encouraging muscle growth and repairing any muscle damage that occurred while working out.

Personally, I would rather have a more balanced meal after a workout so I would prefer to have creatine and Gatorade pre-workout than post-workout.

However, if you’re someone that can’t stomach a solid meal after a workout or you simply don’t have time, then having the creatine, Gatorade, and protein mixture might be a better option for you.

You could make a creamsicle-style protein shake with:

Related Article: Can You Mix Gatorade With Protein Powder?

Is Creatine Mixed With Gatorade Good Before Bed?

A creatine and Gatorade mixture before bed isn’t a good idea because the sugar in Gatorade will negatively affect your quality of sleep if it’s consumed before bed.

It’s best to avoid sugar before bed because sleep is so important for recovery, mood, and cognitive function so it’s not worth sacrificing your sleep just to get your creatine in.

There are other alternatives for mixing your creatine if bedtime is the only time when you can take your creatine because of your schedule. I would recommend milk or oatmeal as an alternative to Gatorade.

Who Should Mix Creatine With Gatorade?

Those who would benefit the most from mixing creatine and Gatorade are those who are more active and/or sweat more often because they will require additional hydration, electrolytes, and energy that come from Gatorade.

Those who expend more energy should mix creatine with Gatorade because they’ll likely need sugar and electrolytes to keep them going without becoming too dehydrated or fatigued.

Who Should Not Mix Creatine With Gatorade?

Those who shouldn’t mix creatine with Gatorade are those who are more sedentary and do not expend much energy throughout the day, and those with health conditions like diabetes.

For these individuals, the benefits of mixing creatine with Gatorade would not outweigh the drawbacks. It wouldn’t be worth consuming this mixture regularly because the calories, carbs, and electrolytes from Gatorade are likely unnecessary for these individuals.

Will Creatine Dissolve In Gatorade?

Creatine can dissolve in Gatorade if mixed in a shaker bottle or with a frother, but it may not dissolve as well when stirred in with a spoon because creatine dissolves more slowly in cold liquids.

Creatine mixes better into warm liquids than cold liquids, but with a bit of extra effort you can get it to dissolve into cold liquids, like Gatorade, without any clumping.

Best Types of Creatine to Mix With Gatorade

The brands of creatine monohydrate that I trust most to deliver a high-quality product are:

My favorite brand of creatine is the PEScience TruCreatine because it mixes well, it’s made with creatine monohydrate, and it’s third-party tested.

Nutricost creatine is a great option, but I prefer the PEScience creatine because I appreciate their efforts to educate their customers on the scientific evidence that is used as reference when designing their supplements to be effective.

Can You Mix Creatine With Sports Drinks?

Yes, mixing creatine with a sport drink is a great option because it can complement creatine’s performance-enhancing benefits by increasing the amount of energy you have for your workouts and keeping you hydrated.

Can You Mix Creatine With Electrolytes?

Yes, mixing creatine with electrolytes is beneficial because it can help to keep you hydrated, which is important for your general health and to maximize your performance in the gym.

What Else Can You Mix With Creatine?

2 Protein Shakes A Day: Pros, Cons, & Should You Do It