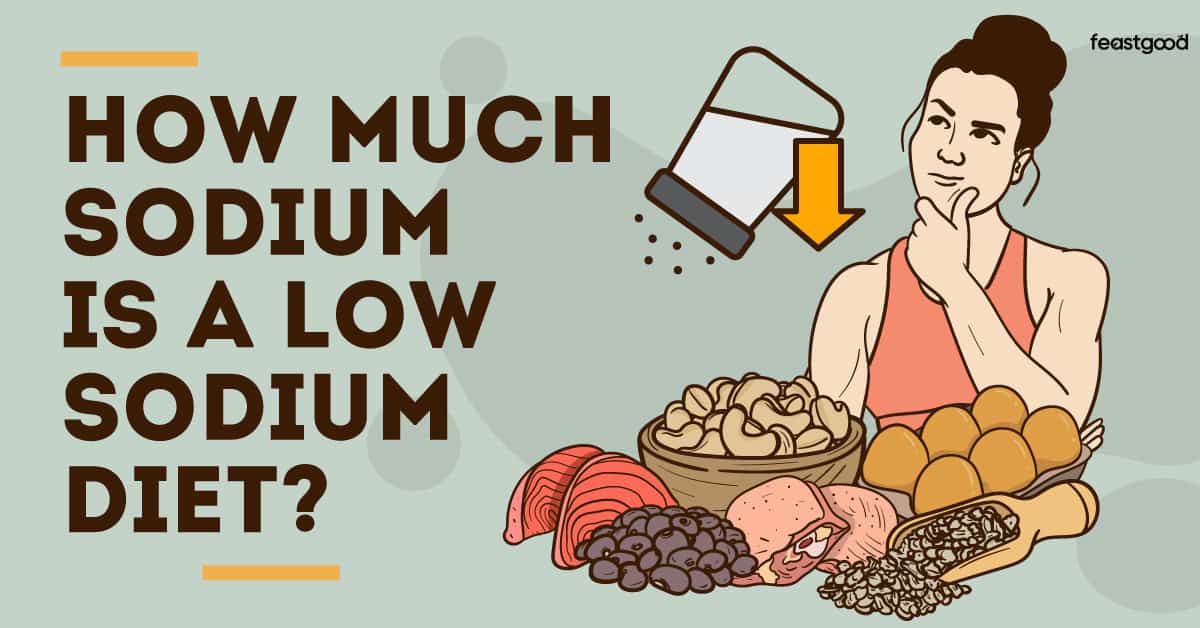 As a Registered Dietitian, people with high blood pressure, kidney problems, and heart disease come to my office to help manage their conditions. In these cases, a low sodium diet is often prescribed.

So, how much sodium is in a low sodium diet?

In order to help you stay within these recommended sodium ranges, I’ve come up with a list of best practices on how to structure your lifestyle and diet.

Here are the topics I’ll discuss:

​​What Is A Low Sodium Diet?

According to the American Hearts Association, people consume around 3,400 mg of sodium per day, which exceeds the recommended target of only consuming 2,300mg per day.

Sodium can be found naturally in most foods: fruits, vegetables, meats, and healthy fats.

However, the majority of sodium nowadays comes from processed foods like chips, pastries, cakes, and frozen food.

Table salt is also one of the significant contributors to the addition of sodium in people’s diets.

3 Reasons To Lower Your Sodium Intake

Studies have shown that a high sodium consumption (more than 2,300 mg) can make your blood pressure rise. This means that consuming a low sodium diet is one of the strategies often used to decrease blood pressure.

The results showed that people in the intermediate group saw a decrease in their blood pressure by 2.1 mmHg, while those on the low intake saw a reduction of 4.6 mmHg.

Thus, consuming less than 2,300 mg of sodium per day can significantly help decrease your blood pressure until you reach a normal range.

Another reason to lower your sodium intake is if you have kidney disease. Chronic kidney disease or kidney failure can affect how your body processes certain nutrients. One of them is sodium.

The kidneys are in charge of processing and modifying the sodium content in the body. When your kidneys are damaged, they cannot eliminate the sodium properly. It can also affect the fluid levels in your body.

If there is a lot of sodium and water in your body, more damage can be done to your kidneys.

Finally, you need to do a low sodium diet if you’re at risk of heart disease. Heart disease is a term to group several types of heart conditions. Some of the most common types are coronary artery disease, heart arrhythmias, heart disease, and valve disease.

Overconsumption of sodium increases your fluid retention, increasing your blood pressure. This can make your heart work harder to pump blood, leading to an overworking heart. It can then lead to heart disease or stroke.

A meta-analysis of six experiments related to sodium consumption was gathered to find a link between a low sodium diet and a decreased risk for heart disease.

Hence, if you are looking to decrease the symptoms of heart disease, a reduction in your blood pressure is mandatory. Look to consume no more than one teaspoon of sodium per day, even better if you can consume only half a teaspoon.

If you are looking to reduce your sodium consumption. You can include several tips whether you are at the grocery store, at home, or going out to eat. Here are the most frequent tips I give my clients.

At The Grocery Store

Should I Use a Salt Substitute to Lower My Sodium Intake?

How To Count Calories In Homemade Juice (2 Ways)