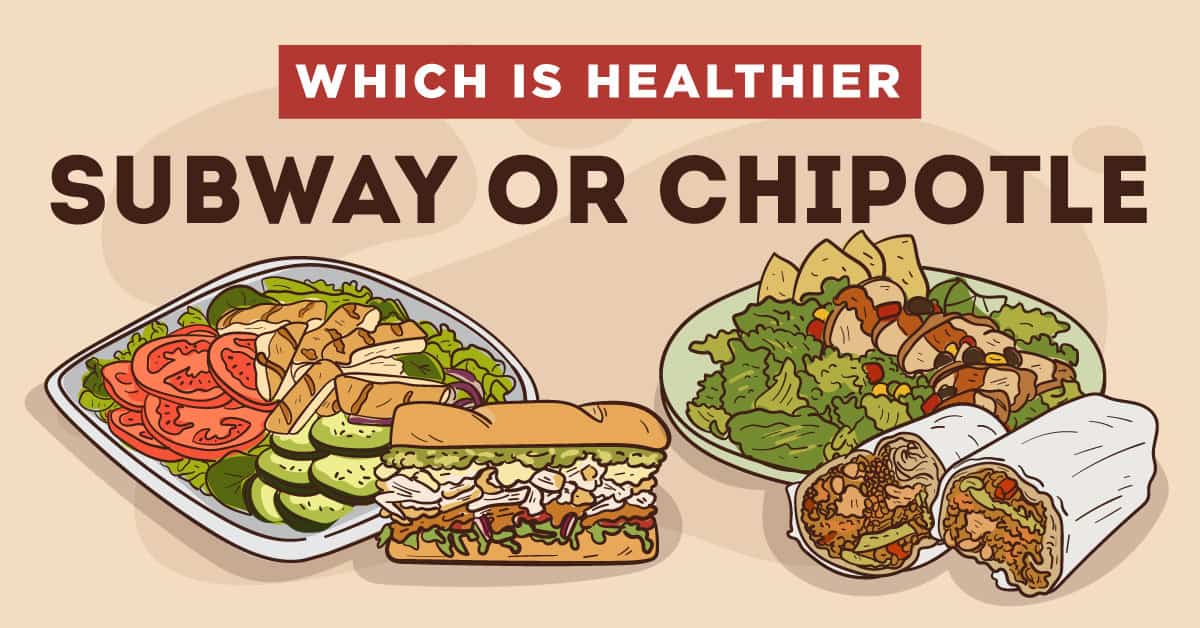 Subway and Chipotle are two highly customizable fast food restaurants, but knowing which one is healthier is important so you can maintain your health and fitness goals.

Is Subway or Chipotle healthier? Both Subway and Chipotle are healthier options compared to many other fast-food restaurants. But if you’re looking for a lower-sodium, lower-fat, lower-calorie option, Subway is the better pick. On the other hand, if you want a lower-cab, higher-protein option, go with Chipotle.

Although Subway is slightly healthier than Chipotle, there are healthy meals at each location that I would order as a nutritionist.

Subway specializes in subs, wraps, salads, protein bowls, and breakfast. However, for this article, I will leave out the breakfast options as they are less comparable to Chipotle’s menu items.

Subway’s meals are customizable, so you can choose your carb source, protein source, vegetables, sauces, and flavor enhancers (fat sources like oil and other sauces you’d put on top of your meal).

If you’re wondering how to fit Subway meals into your daily calorie budget, check out What to Eat at Subway When Bulking or Cutting (6 Meals).

Chipotle specializes in burritos, burrito bowls, tacos, salads, and lifestyle bowls, which are all based on carb, protein, vegetable, and fat sources.

Chipotle’s meal options are completely customizable (like Subway), so you can decide which combinations of ingredients you’d like in your meal.

For examples of meals, you can make at Chipotle when trying to lose weight or build muscle, check out What To Eat At Chipotle When Bulking or Cutting (6 Meals).

Comparing Subway & Chipotle: Which Is Healthier?

To determine whether Subway or Chipotle is healthier, I’ve compared them across different nutritional categories to see which one comes out on top.

Both Subway and Chipotle have plenty of low-calorie options because their meals are based around a carb source, a protein source, vegetables, and flavor enhancers. Therefore, you’re generally getting a balanced meal.

Both Subway and Chipotle are fast food restaurants that are lower in saturated fat. Subway’s menu items have less saturated fat than Chipotle’s menu items, with an average of 5.3g compared to 7.6g, respectively.

The American Heart Association (AHA) recommends limiting your saturated fat intake to 5-6% of your total calories. Assuming an intake of 2000 calories per day, this would allow for 100-120 calories at most from saturated fat per day.

The higher content of saturated fat from Chipotle is from a wider variety of proteins that are higher in saturated fat, including steak, carnitas, and barbacoa.

Although both restaurants have menu items that fit within the AHA’s recommendations, Subway’s menu items are lower in saturated fat by an average of 2.3g.

Chipotle is higher in protein than Subway (+6g), so it is the better option to help you meet your daily protein goals.

The higher carb content of Subway’s menu items is to be expected since most of its meals contain either a wrap or a sub roll. On the other hand, Chipotle specializes in burritos, tacos, and rice bowls, which have fewer carbs than a sub roll.

Chipotle has fewer carbs than Subway (-6g) and more high-quality, high-fiber carb options. It is the better option if you’re looking to reduce your carb intake and increase your fiber intake.

These are both higher than the recommended 1200-1500mg of sodium per day, but because they’re customizable, you can easily make them lower in sodium.

For example, at Chipotle you can customize your order to reduce your sodium content by skipping the salsa. At Subway, you can choose a lower sodium protein source like the chicken strips (210mg).

The main reason why Chipotle’s menu items have more sodium than Subway’s is because of the amount of sodium in its guacamole and salsas, which are generally added to all menu items.

Chipotle’s guacamole has 370mg of sodium, and its salsas have an average of 410mg. If you’re having both, you’re increasing the meal’s sodium content by approximately 780mg.

For low-sodium meals at Chipotle, check out these 12 options.

Subway’s menu items have a lower average amount of sodium than Chipotle’s menu items. However, if you skip the guacamole and salsa at Chipotle, the two restaurants would be similar in their sodium content.

Subway and Chipotle both have more nutrients than many other fast-food restaurants because you get to build your own meal. Therefore, you have a variety of options to choose from.

Subway has 9 different vegetables that you can add to your meal including lettuce, tomato, cucumber, pickles, green pepper, banana peppers, onion, spinach, and jalapeno. Chipotle only has 2 vegetables to choose from: lettuce and fajita veggies (which are a mix of bell peppers and onions).

Both Subway and Chipotle have the same fat sources: cheese, avocado, and various salad dressings.

Although both restaurants have fresh ingredients that add nutrients to your meal, Subway has significantly more protein and vegetable options to choose from. Therefore, it has a wider variety of nutrients to offer.

The Subway sub is served on Italian bread with veggies and southwest chipotle sauce. The Chipotle burrito can be created by ordering a burrito with steak, avocado, fajita veggies, and salsa.

Subway’s sub is better in almost all nutritional aspects, so it is the healthier choice when compared with Chipotle’s burrito.

Subway’s veggie patty salad is made by adding a veggie patty to the Veggie Delight salad. Chipotle’s Sofritas Salad can be made by ordering a salad and adding sofritas, fajita veggies, and chipotle-honey vinaigrette.

Subway’s veggie patty salad has fewer calories, carbs, total fat, and much less sodium than Chipotle’s sofritas salad. The main benefit of Chipotle’s Sofritas Salad is its higher protein content, which can help keep you full for longer.

However, if you struggle to meet your protein targets, choose the Chipotle Sofritas Salad instead.

Chipotle’s Chicken Salad is served with a blend of kale, spinach, and lettuce with fajita veggies and a chipotle-honey vinaigrette.

Subway’s grilled chicken salad is lower in calories, carbs, fat, and sodium than Chipotle’s chicken salad. However, the salad from Chipotle is significantly higher in protein, so it would keep you full for longer.

The main difference between these salads is the salad dressings. Chipotle’s dressing is much higher in calories and fat than Subway’s dressing (220 calories & 16g of fat vs 35 calories & 0g of fat).

My top 3 healthy meal recommendations from Subway are:

The Sweet Onion Teriyaki Chicken Bowl is a healthy option because you can load it with veggies for a nutrient boost, and it comes with a protein source (chicken).

This bowl has enough protein and fiber to keep you full, while also having enough nutrients to support your overall health.

The Buffalo Chicken Grilled Chicken Sub is a healthy option because it’s packed full of protein and is low in fat compared to many other Subway subs.

The sandwich on its own, which is only served with grilled chicken marinated in buffalo sauce, doesn’t have enough nutrients, so it’s important to add veggies. I recommend adding lettuce or spinach, green pepper, onion, and pickles (the buffalo sauce and pickle combo will not disappoint).

If you prefer a lower sodium option, order a standard grilled chicken sub (210mg) instead of the buffalo chicken (900mg). This will help reduce the sodium content by 690mg of sodium.

Another healthy meal option from Subway is the Veggie Delite Salad, which is loaded with veggies and avocado for healthy fats. However, the salad on its own only has 4 grams of protein, which is way too low.

For this reason, I recommend adding grilled chicken (+11g of protein) or two veggie patties (+12g of protein) to the salad to ensure you get an adequate amount of protein.

My top 3 healthy meal recommendations from Chipotle are:

Chipotle’s Paleo Salad Bowl is a healthy option because it’s loaded with nutrients, protein, and healthy fats from the veggies, chicken, and guacamole.

You can eat this bowl as is because it has enough protein and fiber to keep you full and enough nutrients to support your overall health.

However, if you have been advised to reduce your sodium consumption, skip the salsa that comes with this bowl because it is higher in sodium (500mg).

If you have a higher carb allowance based on your goals, you could eat this burrito bowl as is. If you have a lower daily carb intake, you may want to ask for “light rice,” meaning less rice than usual.

If this bowl is too high in sodium for you, skip the salsa to reduce the sodium by up to 500mg.

If you’re in the mood for tacos, the healthiest option at Chipotle is the Chicken Tacos with Fajita Veggies. You can add cheese as a source of fat to balance out this meal.

You could also add salsa or guacamole for flavor, but this would cost you around 250-500mg of sodium.

Without the salsa or guac, you could get all three chicken tacos for 400 calories, 36 grams of protein, 16 grams of fat, 34 grams of carbs, and 460mg of sodium.

Dirty Bulking For A Month: How To Structure + What To Expect