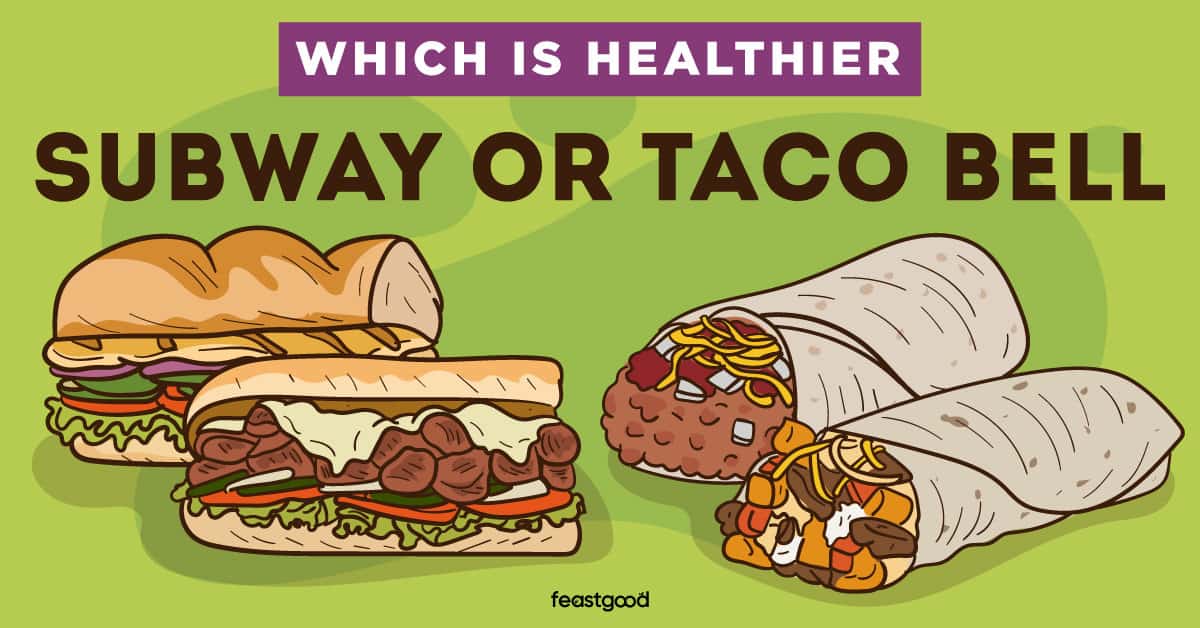 If you’re looking for a grab-and-go meal at either Subway or Taco Bell, then it’s important to know which one is healthier so that you can make the best choice for your nutrition goals.

So, is Subway or Taco Bell Healthier? Subway is the healthier option compared with Taco Bell because its menu items have fewer calories and carbs, and more protein.  As well, Subway offers greater customization for different dietary needs, and has meals with greater nutritional values (vitamins and minerals).

With that said, I did find some meals at Taco Bell that are lower in sodium and saturated fat compared with Subway (which I’ll discuss later).

To decide which restaurant is healthier I compared both Subway’s and Taco Bell’s most popular menu items to see how they compared across 7 different nutritional components.

Subway specializes in sub sandwiches that you can customize as much as you like with an array of protein, veggie, and condiment options. They also offer various breakfast items and salads.

Subway is a healthier take on fast food because of the number of vegetables available and the lack of deep-fried items, which tend to overwhelm other popular fast-food restaurants.

Learn more: What to Eat At Subway When Bulking or Cutting (6 Meals)

Taco Bell specializes in all the best Mexican dishes like tacos, burritos, nachos, quesadillas, and chalupas. They don’t have a breakfast menu or salads but they do offer a variety of side options like loaded or unloaded fries, and chips & dips.

Subway Vs Taco Bell: Which Is Healthier?

To determine whether Subway or Taco Bell is healthier I’ve compared them across the following categories:

Subway is the winner for the most low-calorie options because they have more options that are lower in calories than Taco Bell, even though Taco Bell tacos are the lowest-calorie menu item.

The lowest carb menu item at Taco Bell and Subway is the tacos from Taco Bell, which have an average of 15g of carbs. However, the salads at Subway are nearly the same with 16g of carbs per serving (+1g)

When you consider the type of carb, the Salads at Subway are healthier than the carbs in the Tacos at Taco Bell because the carbs from taco bell are lower in fiber, vitamins, and minerals compared with the carbs from vegetables in a salad that are plentiful in various nutrients.

The highest carb menu item at these two locations is the burritos from Taco Bell which have an average of 52g of carbs. The most comparable menu item from Subway is their 6-inch subs which have 43g of carbs (-9g).

Subway is the winner for carb content because it has more low-carb menu items and the quality of the carbs is better because they contain higher amounts of fiber, vitamins, and minerals.

The lowest protein menu item from these locations is the tacos from Taco Bell which only have an average of 10g of protein, compared to Subway salads which have 15g of protein (+5g).

Subway is the most customizable because there is no limit to how much you can customize your order, whereas at Taco Bell there are some basic customizations (changing sauces or omitting ingredients) but you’re ordering a menu item more than designing it yourself.

Ultimately, there is no competition between Subway and Taco Bell when it comes to customization because Subway allows you to build a meal yourself whereas Taco Bell has set menu items.

Subway allows for far more customizations than Taco Bell so it is the winner.

Subway and Taco Bell both have a variety of protein, carb, and fat options but Subway has a much larger selection of vegetables than Taco Bell has to offer.

The main vegetables available at Subway are:

The main vegetables available at Taco Bell are:

Although Subway and Taco have very different menu items, I’ve found the most comparable items and put them head-to-head to see which menu item is healthier.

I’m choosing Taco Bell’s Bean Burrito as the better vegetarian option because it has more protein, which is a priority for those who are vegetarian. After all, it’s difficult for them to get enough protein.

The Subway grilled chicken sub is lower in calories, carbs, fats, and sodium than the Taco Bell chicken burrito. When it comes to protein though, these two options are equal with 19g per serving.

Regardless of which restaurant you choose, there are healthy options available to order as long as you know what to look for and how to customize your order.

The 6-inch Green Goddess Sandwich with Chicken and avocado is a great option because it has enough protein, carbs, fats, and micronutrients to be considered a balanced meal.

This sub is loaded with veggies that provide fiber, vitamins, and minerals. It also has chicken that provides enough protein to keep you full for longer.

I recommend ordering it on either Multigrain (3g of fiber) or Harvest Grain Bread (4g of fiber) for an added boost in fiber to help slow digestion and keep you satisfied longer. I also suggest adding the smashed avocado for a healthier fat that has anti-inflammatory properties.

Another healthy option at Subway is the Crispy Chicken Salad with Smoky Honey Mustard because it’s loaded with vegetables, and protein, and it’s not too high in carbs or fat.

The crispy chicken in this salad will provide a mixture of protein, carbs, and fat to this salad which is balanced out perfectly with heaps of vegetables for some fiber, vitamins, and minerals.

The smoky honey mustard is an excellent addition because honey mustard and crispy chicken is a classic combination and you’re saving on fat with this sauce over a dressing considering you’re already getting fat from the chicken.

The third healthy meal option that I would recommend is the Steak & Cheese Salad ordered with double meat because the salad provides protein, veggies, and fat but it’s low in carbs so I would compensate for this by bumping up the protein content.

Protein is the nutrient that keeps you full the longest, so when a meal is slightly unbalanced because it lacks one nutrient, then you can either add more of the missing nutrient or add more protein.

In this situation, I would add more steak rather than trying to add a carb to the salad because there aren’t great options for carb additions to the salad at Subway, and I prefer to have a meal with at least 20g of protein and this one is just short (19g) if you don’t order double meat.

One healthy meal option at Taco Bell is a Double Meat Grilled Chicken Burrito that is ordered without cheese or rice and instead has lettuce and tomato because this will decrease the carbs and fats in this meal while increasing the nutrients.

There is already 10.5g of fat and 38g of carbs without the rice or cheese in this burrito so it’s best not to add to this by including the rice and cheese. Instead, I recommend adding veggies in the form of lettuce and tomato which are the only options available.

Additionally, the double meat version of this burrito is recommended because without it, it only has 14g of protein which is too low to keep you full until your next meal.

Another healthy option from Taco Bell is to order a taco and combine protein sources, like steak and beans, to increase the protein content.

If you were to only have one protein source then it wouldn’t be enough protein to keep you full for very long, so combining two protein sources is the way to go. I also recommend adding lettuce and tomatoes for a nutrient boost.

I also suggest choosing a reduced-fat sour cream since you’re already getting fat from the steak.

The third healthy meal option at Taco Bell is a Bean Burrito which is the best vegetarian option because it has the most protein at 15g per serving.

The bean burrito has an excellent amount of fiber 9g from the beans, lettuce, and tomato which in combination with the protein from the beans will keep you full for longer.

This burrito can easily be made vegan by omitting the cheese which would also save you 30 calories.

Can You Cook With Protein Powder? (Yes, Here’s How)