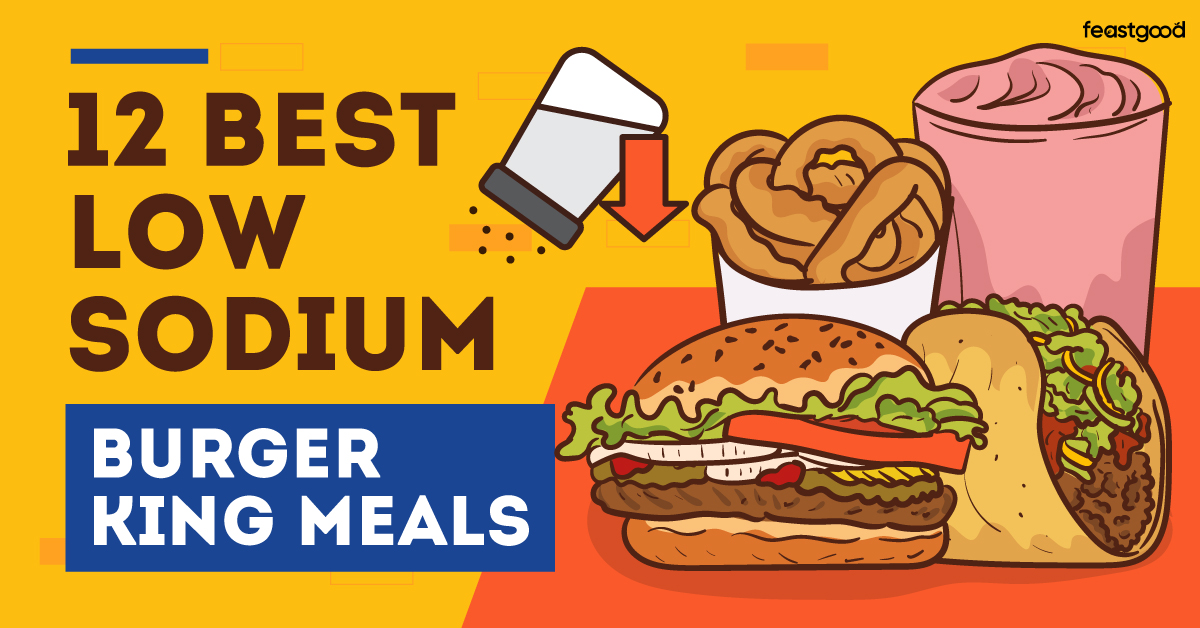 Burger King may not be the restaurant that first comes to mind when you’re looking for low sodium options.  However, Burger King offers numerous menu items that are low in sodium, and easy ways to customize your meal if you’re trying to reduce your sodium consumption.

The best low sodium meals at burger king are:

Those who want to eat at Burger King while keeping their sodium consumption low should understand what menu item to order, what size to order, and how to customize their order.

Is Burger King High In Sodium?

However, there is a good selection of items on the Burger King menu that are low in sodium, so those trying to limit their sodium intake could still find something to eat.

The menu items that are highest in sodium are those that have more than 1500mg of sodium on their own.

However, any combination of low sodium items could also exceed the recommended amount if you’re not mindful.

What Is Considered Low Sodium At Burger King?

The menu items at Burger King that are considered low sodium are those that have less than 500mg of sodium per serving.

500mg of sodium or less is the standard for sodium products because studies have shown that those who want to maintain a healthy blood pressure should be eating between 1200-1500mg of sodium per day.

Assuming that you’re eating 3 meals per day and your daily sodium intake is divided equally between these meals, each meal should have between 400-500mg of sodium.

Therefore, meals that are 500mg or less are considered lower in sodium and are recommended for those trying to reduce their sodium consumption.

To reduce your sodium intake at Burger King you can:

A great way to reduce your sodium consumption when you eat at Burger King is to order items that don’t have cheese or ask for “no cheese”.

One slice of cheese at Burger King has 180mg of sodium so by skipping the cheese on your order you can reduce your sodium consumption significantly.

To lower the sodium content when ordering at Burger King you can downsize your order so that you’re not consuming as much of the high sodium foods.

If you order a Junior size rather than a regular size, you can significantly reduce the amount of sodium you’re eating.

To decrease your sodium consumption at Burger King, you can also be more intentional about the type of condiment being used and how much of it is being used.

The sodium in condiments can add up quickly because some of them have a high sodium content in a very small amount.

The sauces at Burger King are as follows:

Therefore, when ordering a sandwich or burger it’s probably best to order with ranch, ketchup, or mayo and to hold off on the BBQ or Buffalo sauce.

When you’re ordering french fries and onion rings, it’s worth asking for them to be unsalted because typically after they’re cooked they’re heavily salted.

So if you were to ask for them unsalted, they would likely be made fresh on the spot and be much lower in sodium than they would normally be.

Related Article: What To Eat At Burger King When Bulking or Cutting (6 Meals)

The lowest sodium menu item at Burger King is the strawberry banana smoothie, which has 55mg of sodium per 16oz serving.

The strawberry banana smoothie is a great breakfast option or afternoon pick-me-up for those who want a low sodium meal from Burger King.

Another very low sodium item from Burger King is their Garden Salad, which has 95mg of sodium by itself.

I think it’s fair to say that most people will want at least a bit of dressing with this salad, which will increase the sodium content slightly. However, if you ask for dressing on the side and add it sparingly, then it should be fine.

For reference, here are the salad dressings listed on their menu:

Another low sodium option at Burger King is their Value Size Onion Rings, which have 210mg and are well within the 500mg recommendation.

The “value size” is a slightly smaller serving size than the “small size” (43g serving vs 90g serving). The value size is low in sodium and the small size is too high in sodium.

I would pair the value-size onion rings with a garden salad to increase the nutrient quality and volume of the meal.

The 4-piece chicken nuggets are also low enough in sodium to be a good option for those trying to limit their sodium intake.

If you’re heading to Burger King looking for a burger, then you’re in luck because their traditional Hamburger is low enough in sodium for those trying to keep their sodium intake low.

Their traditional hamburger has 380mg of sodium by itself, so this doesn’t include any extra condiments that you may want to add.

I would suggest adding a lower sodium condiment like ketchup or ranch to keep the sodium intake as low as possible.

Another option for those who want to eat low sodium is the Whopper Junior Sandwich which is smaller than the traditional whopper and only has 390mg.

Opting for the smaller size whopper is a great way to have what you’re craving but still keep your sodium intake low.

You could have the sandwich on its own or pair it with a garden salad for a nutrient boost.

The double hamburger from Burger King is also a lower sodium option on their menu with only 410mg of sodium.

The Burger king double hamburger has two beef patties which are ideal because it increases the protein content of the meal to 21 grams, which will help to keep you full for longer periods.

The Burger King Crispy Taco would be my top pick for a low sodium meal because it is low enough in sodium at 410mg and it’s delicious.

The Crispy Taco from Burger King has a crunchy tortilla filled with seasoned beef, cheddar cheese with lettuce, and is topped with a delicious taco sauce.

You could also order any size french fry at Burger King and still be under the 500mg sodium recommendation.

You could order a smaller size and pair it with another menu item, or order a larger size and have it on its own.

If you’re looking for a breakfast item at Burger King you could order the french toast sticks which have between 260 to 430mg of sodium depending on how many you order.

Burger King also has milkshakes on their menu that are low enough in sodium for those who want to reduce their sodium consumption.

Unfortunately their other flavors (Oreo & Hershey’s Chocolate) aren’t low enough in sodium to be a great option.

The last menu item at Burger King that is low enough in sodium for those who want to keep their sodium low is the 6-piece chicken nuggets which have 470mg of sodium.

The 6-piece chicken nuggets are delicious, but the only downside to ordering them is that they’re high enough in sodium that they can’t be paired with any other menu item without being too high in sodium.

The meals to avoid at Burger King are those that have more than 1500mg of sodium:

What Burger King Item Has The Least Amount of Sodium?

The Burger King menu item with the least amount of sodium would be the strawberry banana smoothie, which has 55mg of sodium for a 16 oz serving.

Can you get Burger King Fries Without Salt?

You can order Burger King Fries without salt to reduce your sodium consumption. In doing so, you’ll also get fries that are fresh out of the oven because they’ll have to make them on the spot.

How Much Sodium In Burger King Whopper?

In a classic Burger King Whopper, there is 980mg of sodium, but if you’re ordering it with cheese there is 1340mg of sodium in one sandwich.

How Much Sodium In Burger King Chicken Sandwich?

How Much Sodium In Burger King Chicken Nuggets?

How Much Sodium In Burger King Fish Sandwich?

The Burger King Fish Sandwich, which is known as the BIG FISH Sandwich, has 1180mg of sodium and therefore is considered high in sodium.

Caffeine Pills vs Pre Workout: Pros, Cons, & Which Is Best?