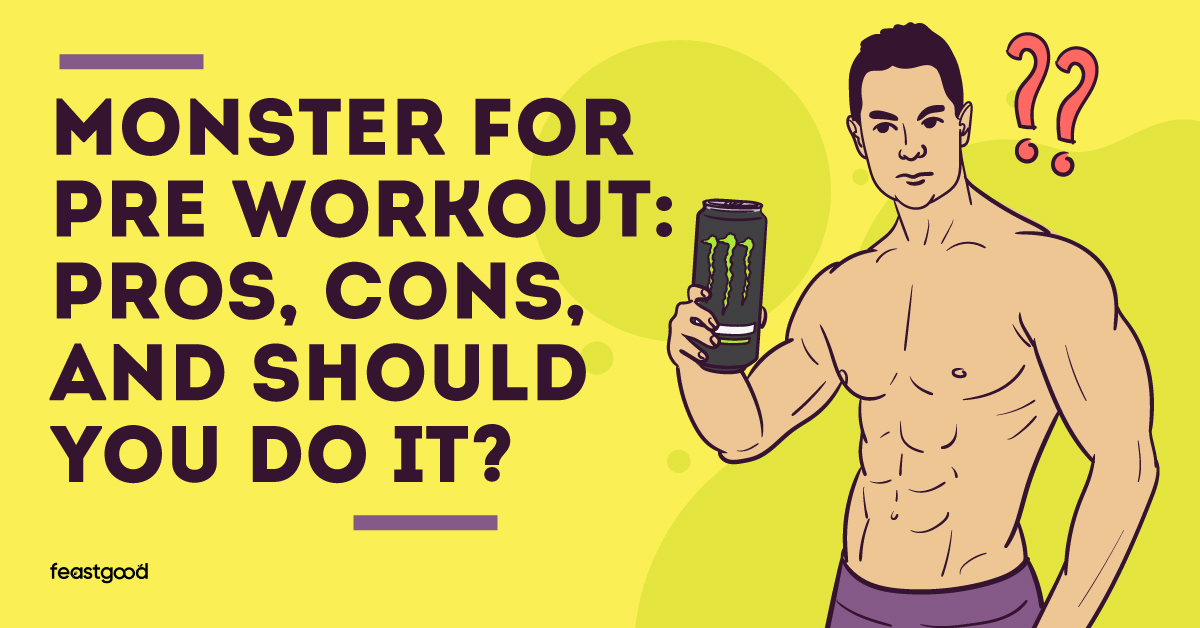 As a nutrition coach, many of my clients ask whether energy drinks, like Monster, can be used as a pre-workout.

So, should you drink Monster as a pre-workout?  Monster is acceptable as a pre-workout drink as the caffeine, ginseng, and B vitamins can increase energy, endurance, and focus, leading to increased workout performance. You’ll feel Monster’s effects within 20 minutes or less, so you should consume it just prior to starting your workout for the most benefit.

However, while Monster can be a quick and convenient pre-workout drink, there are a number of performance-boosting ingredients found in traditional pre-workout powders that aren’t found in Monster. So, if you use Monster regularly in place of pre-workout, you may be missing out on additional benefits.

In addition, there are some concerns with regard to the ongoing consumption of energy drinks that should also be considered before choosing a drink such as Monster for a pre-workout.

Monster is a useful pre-workout when there isn’t another option (e.g. you ran out of pre-workout or left it at home). However, traditional pre-workouts contain ingredients that Monster doesn’t have (as I’ll explain below) that can improve workout performance.

In addition, a powder is a much more portable than a can. You can keep a container of pre-workout powder in your gym bag without worrying about it being shaken up or dropped.

Notwithstanding, if you’re relying on energy drinks too often, like Monster, you’ll be spending way more money than a traditional pre-workout powder (I provide a cost breakdown between Monster and pre-workouts below).

Key Takeaway: Monster is not better than a traditional pre-workout supplement.

Benefits of Using Monster as a Pre-Workout

If you’re using Monster for a pre-workout, here are the top benefits:

If you’re on your way to the gym and realize you don’t have any pre-workout, that doesn’t have to derail your workout.

Monster is one of the most readily available energy drinks in North America. From corner stores to grocery stores, you’ll almost surely find they have Monster energy drinks if you pass by one on your way to the gym.

The Caffeine in Monster Will Boost Your Workout Performance

With 160mg of caffeine, Monster contains significantly more than the amount found in a regular 8oz cup of coffee (between 75-95mg).

Caffeine has been shown to provide a boost in energy, alertness, and focus, improving your workout performance.

A can of Monster also contains taurine, B vitamins, and ginseng, which enhance the effects of caffeine by giving a more sustained boost in energy and an increased sense of well-being (aka a mood boost).

Drawbacks of Using Monster As A Pre-Workout

Here are the most notable drawbacks to using Monster as a pre-workout:

When comparing Monster with traditional pre-workout drinks, Monster is lacking. You won’t find other performance-boosting ingredients such as:

Monster comes in a pressurized can, which means that it is sensitive to being shaken. If you carry it in your gym bag, it may lead to an accident where your gym bag ends up sticky and smelling like Monster.

On top of that, the carbonation can lead to belching, bloating, and other digestive discomforts before working out.

Furthermore, if you are bulking, carbonated beverages can lead to feeling full, making it more difficult to consume the necessary calories to reach your daily goal.

There are several other reasons why you may struggle to hit your daily calorie targets. If this sounds like you, check out Struggling To Eat Enough Calories? 15 Tips That Actually Work.

The cost of a single can of Monster, especially if purchased at a convenience store, is between $3.99-$4.99. This is significantly higher than the cost of a scoop of pre-workout powder.

The average cost of a scoop of pre-workout will depend on the formula and the concentration of key ingredients. However, the average range for the most popular pre-workout formulas is between $1.00-$2.00 per serving (about a 60% saving).

Monster contains a whopping 54 grams of sugar in a single can, nearly double the recommended daily dose of sugar.  When consumed in liquid form, sugar is rapidly digested, which can lead to a significant drop in energy (a “crash”) within 30 minutes.

In addition, if your macro ratios include less than 200g of carbohydrates, this represents 25% or more of your daily carbohydrate intake with very poor quality, nutrient-empty carbohydrates.

For a list of foods that are low in sugar and ideal for building muscle, check out Top 10 Foods High In Calories But Low In Sugar.

Monster Is Not Ideal If You Train At Night

Monster is a poor choice if you train at night or within 4 hours of your normal bedtime. In these scenarios, you may need to use a stim-free pre-workout so your sleep isn’t affected by the caffeine.

It should also be noted that if you have a sensitivity to caffeine or suffer from high blood pressure, Monster is not a suitable option, as side effects may include racing heart, nausea, and dizziness.

Related Article: Can You Take Creatine Before Bed? And, Does It Affect Sleep?

There is Controversy Around Energy Drinks

Studies have shown regular consumption of Monster and other energy drinks can lead to adverse health effects, and in extremely rare cases, even death.

According to the Mayo Clinic, most individuals can tolerate up to 400mg of caffeine per day.  Consuming 2.5 cans of Monster would bring you to the recommended daily limit.

If you already consume coffee, tea, or other caffeinated beverages, even one can of Monster on top of those other drinks could be enough to bring you to the recommended daily caffeine limit.

As such, energy drinks alone aren’t the main reason for negative side effects – it also depends on how many energy drinks and how much total caffeine you consume each day.

If you are in a pinch and need a boost for your workout, the occasional Monster is better than no pre-workout at all. However, I would recommend against using Monster for pre-workout if you have a pre-workout powder available.

You will have a much better workout using a pre-workout that contains performance-boosting ingredients such as creatine, citrulline malate, BCAAs, and beta-alanine.

You may also want to sip Monster rather than try to chug it in one fell swoop. This will give you a more sustained release of energy, and you’ll experience less gassiness from the carbonation.

As I mentioned earlier, the carbonation can lead to bloating and abdominal discomfort. This is especially noticeable if your workout includes lifts such as squats or deadlifts or any other lift that involves wearing a weight belt. As such, avoid drinking Monster if your workout requires you to wear a weightlifting belt.

It’s important to note that pre-workout powders can also cause digestive discomfort. Learn more about why this happens and how to avoid it in Pre Workout Sickness: How Common Is It, Causes, & How To Fix.

If you are trying to lose weight, I would also recommend using a sugar-free version, as excess sugar intake has been shown to lead to weight gain.

Furthermore, it is not recommended to mix Monster with other pre-workouts or caffeinated beverages because it already contains a significant amount of caffeine. The excess caffeine may lead to jitters and irritability or even cardiac conditions in extreme cases.

How Long Before A Workout Should I Take Monster?

The effects of caffeine are typically felt within about 20 minutes of consumption. As such, Monster should be consumed within 15-20 minutes of starting your workout to gain the maximum benefit.

Can The Sugar In Monster Affect Your Workout Gains?

If you are trying to lose weight, drinking Monster can hinder your progress due to the high sugar content. If you are on a bulking cycle and looking to consume extra calories, the sugar in Monster may not be a major problem because it can make it easier for you to hit your daily calorie target.

Can You Mix Monster With A Pre-Workout Powder?

You should not mix Monster with a pre-workout powder, especially if the powder contains additional caffeine or other stimulants. This may lead to unintended side effects such as jitters, dizziness, and inability to focus. It could also put you over the recommended limit of 400 mg of caffeine per day.

Can You Consume Monster WHILE Working Out?

You can drink Monster while working out if the gym you train at isn’t concerned about open beverage containers. It will provide a more steady release of caffeine rather than one large shot that leads to an energy crash partway through. This is particularly helpful if your workout lasts longer than 60 minutes.

What To Read Next

Another common question I get as a nutrition coach is whether or not you can drink Red Bull before a workout. Check out my article Red Bull For Pre-Workout: Pros, Cons, and Should You Do It to learn more. Also, learn more about Is Bang A Good Pre Workout? (Does It REALLY Work)

If you want to learn more about pre-workouts, what you can mix them with, and what kind of food is best to consume before a workout, check out the links below:

Jon McLernon (aka Coach Jon) is a Precision Nutrition Level 2 Certified Master Coach. With a background in chemistry and psychology, Coach Jon has a passion for supplement/nutrition science and behavioral psychology. When he’s not helping his clients crush their nutrition goals, he’s usually trying to wrangle a busy toddler (and get him to eat more veggies), or he and his Aussie wife are off on another globetrotting adventure!