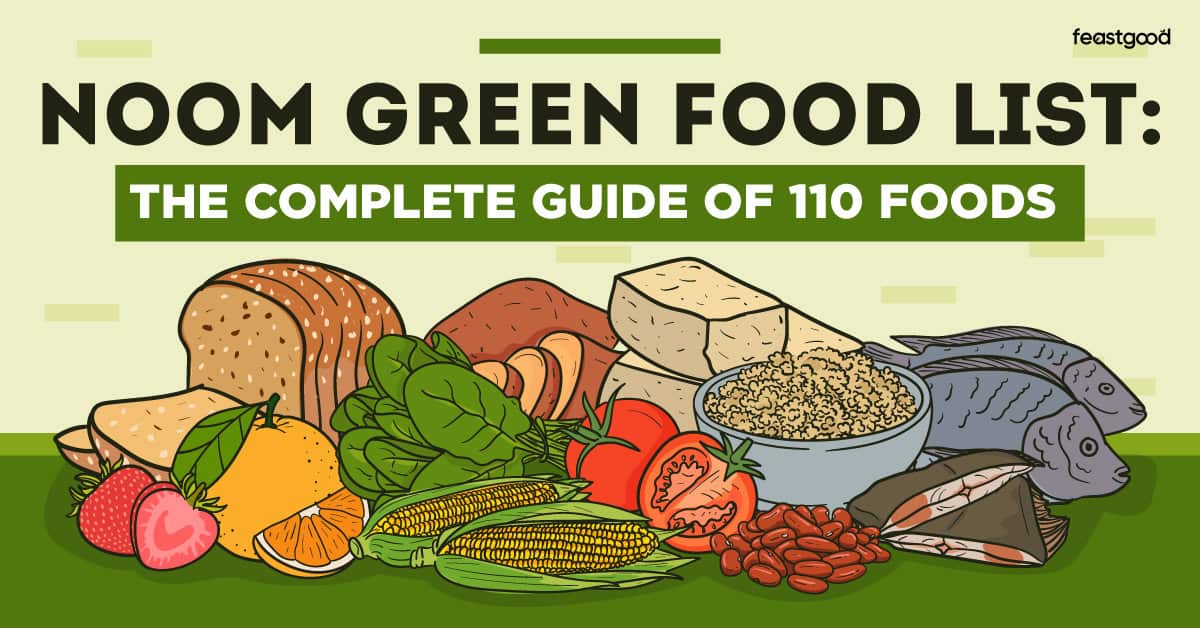 After using the Noom app for a month and discovering that they use a color categorization system to teach users about food quality and what to eat, I wanted to learn more about their green foods to see what foods Noom considers the “healthiest”.

Noom doesn’t provide an extensive list of their green foods, so I’ve done the research and put together this complete list of green foods for you to reference.

Want to learn more about Noom? Check out my complete Noom Review where I give you the pros, cons, and who I think would most benefit from using it.

What Are Noom Green Foods?

Green foods in the Noom app are foods that are considered to have lots of nutrients with minimal calories.

“Foods that fall into the green category should be consumed in larger quantities than foods that are less nutritious and higher in calories”.

As a nutrition coach, I was curious to know more about how Noom decides whether a food is green or not.

So I reached out to Noom for clarification on what the actual thresholds are for a particular food to be considered “green”, whether that’s being below a certain calorie limit, or requiring the food to include a certain number of nutrients.

Noom answered referring me to an article that already exists within the app.

Unfortunately, that article does not discuss concrete thresholds for calories or nutrients, so I reached out one more time asking for specifics

This time, Noom provided me with information that isn’t currently available to the public.

It turns out that Noom uses a food’s calorie density (the number of calories in a serving of food divided by the weight or volume of the food) to determine its classification.

Noom explained that Green foods are foods that have a calorie density less than or equal to:

In my pursuit of the Noom formula, I stumbled upon this Reddit thread, which has a hypothesized formula for Noom’s color classifications.

Key Takeaway: Green foods can be consumed in larger quantities because they have a lower caloric density than yellow or orange foods. You can calculate whether a particular food is green by using Noom’s formula outlined above.

Some easy ways to include more green foods while using Noom are to:

Can You Eat Unlimited Green Foods On Noom?

You can consume a larger quantity of green foods on Noom compared with yellow and orange foods because they are lower in calories; however, these foods aren’t unlimited because you should still aim to adhere to your daily calorie target based on your goal.

In other words, you can consume as many green foods as you want, up to the daily calorie target that the Noom app recommends.

That said, you shouldn’t necessarily aim to only eat green foods.

Green foods are very low in fat, which is why their calorie content is very low (fat has the most calories) but consuming an adequate amount of fat each day is essential for your overall health.

The World Health Organization recommends that 20-35% of your calories come from fat.

For this reason, you should aim to consume lots of green foods with a mix of yellow (i.e. avocado) and orange foods (i.e. peanut butter) that are higher in fat.

In order to come up with this list of green foods, I had to log each one of these foods in the Noom app and see whether noom categoriezed it as green or not.

Fruits That Are Green on Noom

Grains That Are Green on Noom

Vegetables That Are Green on Noom

Starches That Are Green on Noom

Dairy Products That Are Green on Noom

Proteins That Are Green on Noom

Seafood That Is Green on Noom

Beans & Legumes That Are Green on Noom

Plant-Based Alternatives That Are Green on Noom

Soups & Broths That Are Green on Noom

Condiments That Are Green on Noom

Alcohol That Is Green on Noom

What Cereal Is Green On Noom?

There are limited cereal options on Noom that are green foods, but Total Raisin Bran Crunch Whole Grain Wheat Flakes, Fiber One 80 Calorie Cereal, and Quaker Multigrain Life cereals are all green foods.

What Bread Is Green On Noom?

The bread varieties that are green on Noom are whole grain, whole wheat, dark rye, sprouted, and brown bread.

What Protein Is Green On Noom?

Fooducate App Review: Good Free Version, Premium Not Worth It