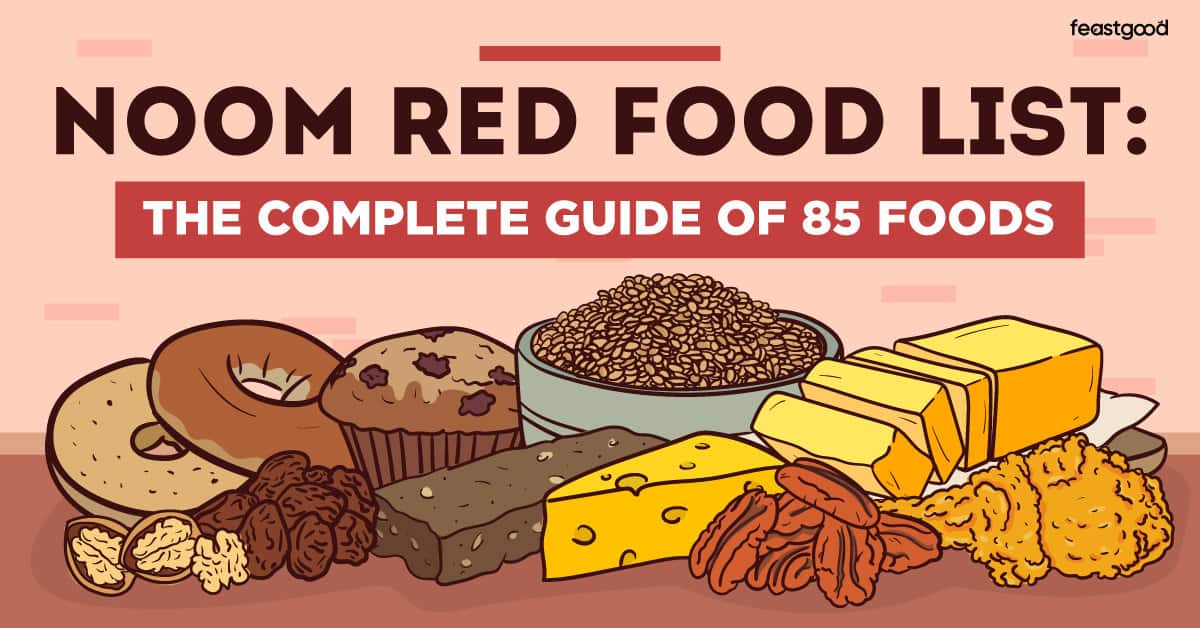 I tried the Noom app for a month and discovered that they use a color categorization system to teach users about finding the right balance of foods to help them meet their health goals.

However, I wished there was a more comprehensive guide on which foods fall into which color category, especially because as a nutrition coach, I was even surprised that some “healthy” foods actually fall into Noom’s red category.

So I did my research and put together this complete guide on red foods on Noom.

The color categorization feature is only the tip of the iceberg with Noom; to evaluate the pros and cons of this app from a nutrition coach’s perspective check out my full review of Noom.

Red vs Orange Foods on Noom:  Is There A Difference?

When I started talking to other Noom users about their experiences using the app, I noticed that they all talked about red foods. However, when I tested the Noom app I didn’t see any sign of red foods.

The color categorizations I was presented with were green, yellow, and orange foods.

After further investigation, I learned that Noom used to have green, yellow, and red foods but in 2022 they changed the red food category to orange to avoid the negative connotation of the color red.

Most Noom users still refer to these foods as “red foods” rather than “orange foods”, so in this article, I will also refer to them as red foods.

Key Takeaway: If you’ve recently started using Noom and are only seeing “orange foods” in the app, please know that orange and red foods are the same food groups.

What Are Noom Red Foods?

Red foods in the Noom app are foods that are higher in calories and have very few nutrients and therefore should be consumed in limited quantities if your goal is to lose weight.

The foods that fall into the red food category are foods that are high in sugar, fat (both healthy and unhealthy fat), and foods with little to no fiber.

Although Noom explains that they’ve classified foods according to their calorie and nutrient profile, they don’t mention the specific calorie range or nutrient composition that food must have to be considered red.

As a nutrition coach, I was curious about what formula they use to classify foods as red foods, so I reached out to Noom asking for more specific information.

At first, Noom didn’t answer my question and instead referred me to an article available within the app that doesn’t give specifics.

I expressed once again that I was interested in more analytical data about their classification system and they delivered!

What you see below is not available to the public, but was confirmed by Noom to be the formula used.

Noom uses a calorie density formula to classify food, taking the number of calories in a serving of food and then dividing it by the weight or volume of the food.

Red foods are foods that have:

For example, nuts have 121 calories in a 20-gram serving, which gives them a calorie density of 6 and classifies them as a red food.

Noom also explained that there are some exceptions though because:

“Once we do the math, our team of nutrition experts and medical doctors review the data and make modifications”.

Noom Classifications: A Word Of Caution

Noom’s classification formula was so sought after that some Reddit users tried, unsuccessfully, to guess Noom’s formula to provide the public with answers.

After comparing the Reddit formula with Noom’s actual formula, I can confirm that although the Reddit users were on the right track, they missed some key information.

So, for those who have stumbled across this Reddit thread, it’s important to know that their proposed formula is NOT accurate.

Key Takeaway: You can determine whether a particular food falls into the red category by following Noom’s calorie density formula outlined above; however, It’s important to remember that foods that are classified as Red foods aren’t off-limits and aren’t necessarily bad for you.

Should You Avoid Eating Red Foods On Noom?

No, you should not avoid eating red foods while following Noom.  However, Noom does recommend that you limit your red food consumption to 25% of your total intake.

Noom states that red foods “simply raise a caution flag for foods that contain a lot of calories without filling you up”.

Noom’s goal with the color categorization is to bring awareness to calorie and nutrient profiles of foods to help users make more informed decisions, but they emphasize that there are no “good” or “bad” foods.

As a nutrition coach, I can confirm that cutting out foods that you enjoy isn’t sustainable long-term; so it’s best to incorporate the foods you like that may not be as healthy in smaller portions and less frequently than foods in the green and yellow categories.

Tips On How To Incorporate Red Foods On Noom Properly

You can incorporate red foods by:

What Happens If You Go Over Your Red Food Target of 25%?

If you go over your red food recommendation (25% of your total intake) then you’re more likely to overeat and you could miss out on key nutrients that your body needs, depending on which red foods you’re choosing.

If you’re eating more red foods than is recommended then the main repercussion is a higher calorie intake than perhaps is desired.

Nuts and seeds are very high in nutrients, but they are also high in calories which is why they are considered red foods.

Hot dogs are very low in nutrients and they are high in calories so they are also classified as a red food.

Based on this information, you can see that Noom classifies food primarily based on its calorie content rather than its nutrient content.

This is important to understand because oftentimes people think that all food in the red category is “unhealthy” but this isn’t actually the case. That said, you should still aim to get the majority of your calories from green and yellow foods because they will fill you up faster for fewer calories than red foods.

To come up with this list of red foods, I’ve logged each of these into the Noom app to verify that Noom has categorized them as red foods.

Fruits That Are Red on Noom

Carbs That Are Red on Noom

Dairy Products That Are Red on Noom

Proteins That Are Red on Noom

Seafood That Is Red on Noom

Nuts & Seeds That Are Red on Noom

Condiments That Are Red on Noom

Oils That Are Red on Noom

Fan Favorites That Are Red on Noom

Desserts That Are Red on Noom

Drinks That Are Red On Noom

Alcohol That Is Red on Noom

Why Are Certain Foods Red on Noom?

I’ve got lots of questions from readers wondering why certain foods on this list are considered red on noom, especially when they’ve heard that particular food is “healthy”.  Let me address some of those questions below.

Why Is Protein Powder A Red Food On Noom?

Why Are Cheerios A Red Food On Noom?

Cheerios are likely red on Noom because they have too many calories per serving based on their categorization formula. It’s unlikely that it’s related to a lack of fiber considering most cereals on Noom (even those that are high in fiber) are red foods.

Why Are Almonds A Red Food On Noom?

Almonds are categorized as a red food despite having plenty of nutrients because they are higher in calories. Fats (healthy and unhealthy) have 9 calories per gram which is higher than foods that are high in carbs or protein at only 4 calories per gram.

Which Is Healthier Subway or Chipotle? (Our #1 Pick)