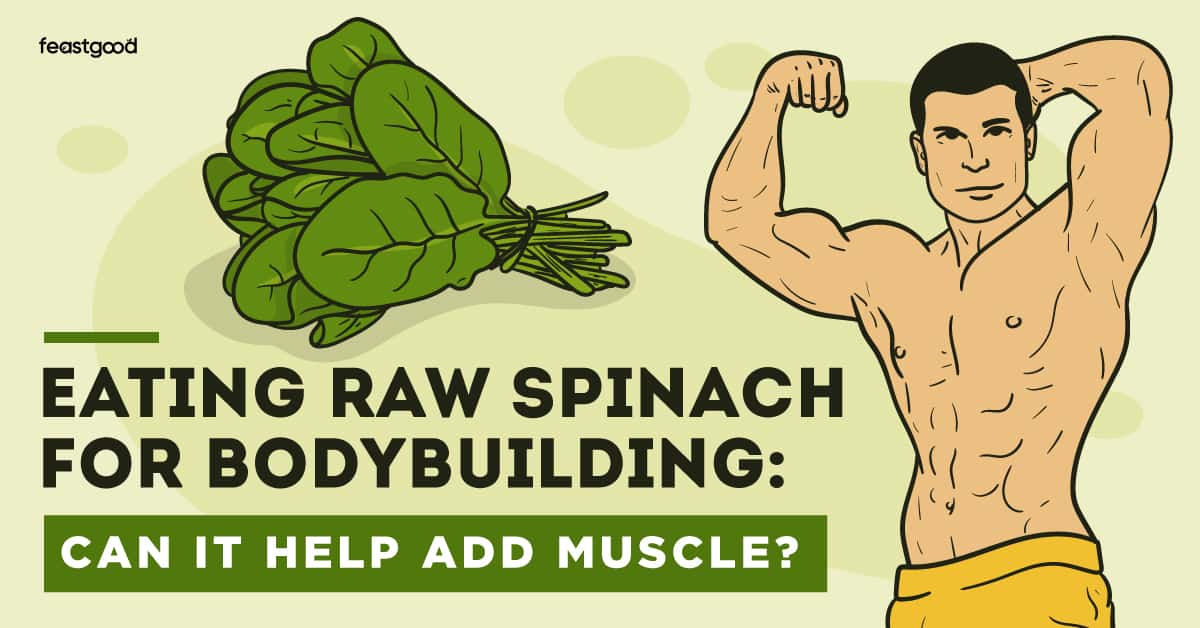 Spinach is a superfood that is highly talked about in the bodybuilding community.

Even when we were kids, cartoons such as Popeye attributed spinach to muscle gaining properties.

But, is this true…

Will eating spinach help you add muscle? Although spinach doesn’t contain calories and protein, there is a component called ecdysterone, which is a natural plant steroid that can aid in muscle strength and development. Also, since spinach is high in antioxidants, it reduces inflammation, leading to better muscle recovery post-workout.

In this article, I will explore everything related to raw spinach and bodybuilding, including:

One cup of raw spinach (30 g) has the following nutritional information.

Those in a cutting phase benefit from low-calorie foods. They provide a lot of volume in your stomach (making you feel full), without adding too many calories. That way, you avoid getting hungry during the day even when decreasing your overall caloric intake.

Since spinach doesn’t contain many calories, it doesn’t include a lot of macronutrients either.

In one cup of spinach, you get 1 gram of carbs. Most of these carbs come from fiber.  One cup of spinach has 2.5% of the daily recommended intake. The protein and fat content has less than 1 gram of each. Again, it doesn’t represent a significant number for a bodybuilder.

What does this mean for bodybuilders? Since spinach has less than 1 gram of each macronutrient (carb, protein, and fat), spinach is considered an “unlimited” food for bodybuilders, meaning you can eat any amount you want without having to track it toward your overall daily caloric intake.

While spinach is low in calories and macros, it’s extremely high in micronutrients and vitamins.

Spinach is called a superfood due to its high nutrient composition. It has almost all the nutrients that your body needs to stay healthy.

Here are the top nutrients that spinach provides and how it aids a bodybuilder:

Check out my complete guide on best vegetables for building muscle.

Long cooking times or high heat tend to have a more significant impact on the mineral composition.

However, this can be prevented with the correct cooking method. Microwaving and steaming tend to preserve the nutrients better compared with boiling, frying, or baking.  For example, boiling spinach can result in a loss of 50% of the vitamin C content compared to 11% when they were steamed.

Here are the top reasons why you want to include raw spinach in your bodybuilding diet.

Since spinach is mostly fiber, it helps increase satiety levels. This means that you are likely to feel less hungry. This is ideal for a bodybuilder in a cutting phase because when you cut down your caloric intake, you might feel hungry during the day.

Adding spinach to your smoothies, eggs, or as a side salad can help keep your hunger levels at bay (without adding any additional calories).

Nitrates are found naturally in leafy greens like spinach and kale. Nitrates are turned into nitric oxide, which helps dilate your blood vessels. This means that more blood can go to your muscles, which means more oxygen and more nutrients can reach them. As a result, your muscle recovers better.

This component can increase muscle strength, power, and performance.

In a study done over 12 weeks, people were given a spinach extract to see if there was muscle improvement. At the end of the study, participants had a 2% increase in physical performance when all other aspects of the participant’s diet were controlled.

Keep in mind, this study was done in adults over the age of 50, and 83% of the participants were women.  So further research is needed to study the impacts of spinach on other populations.

One of the most significant benefits of spinach is that it is nutrient-dense. This means that you get a lot of nutrients in a small amount of food.

Vitamins and minerals are essential for having a good immune system, decreasing inflammation in the body to have better recovery, and helping the body convert food into energy.

Many bodybuilders are simply concerned with the number of calories and macros they consume without giving enough thought and attention to the number of micronutrients.  However, it’s the micronutrients in foods like spinach that allow you to maintain optimal health and bodily functions.

Although there are several benefits, here are the two cons for including spinach in your bodybuilding diet.

Since spinach is high in fiber, it can produce stomach problems such as bloating and stomach cramps. For those that have problems digesting spinach, it is better to have it in smoothies (since it helps digest it better) or have it cooked not raw.

The best way to control gastric problems when eating spinach though is simply controlling the portion sizes.  Start with half a cup and increase your serving size based on your tolerance.

Spinach can interfere with the ability to absorb other nutrients. There is a component in spinach called oxalic acid that can bind to magnesium, calcium, and zinc, making them unable to be absorbed by the body.

Having too much spinach during the day can prevent other nutrients from absorbing resulting in nutrient deficiency. Additionally, having too many oxalates in your diet can potentially trigger kidney stones or gout.

For those that are prone to having kidney stones I generally recommend not having more than 2 cups of high oxalate foods during the day (this includes spinach, berries, coffee, chocolate, and kale).

Can You Eat Raw Spinach Before Workouts?

Eating spinach before working out can help your blood vessels dilate, which means that more oxygen and nutrients are carried into your muscles. This means better performance during your workout. However, it lacks carbs which help provide energy, meaning you need to add a carb source (oatmeal, fruits, or quinoa).

However, if you’re one of those people as I mentioned above that may get stomach issues or bloating, I recommend having it 1-2 hours prior to training, not directly before.

Can You Eat Raw Spinach After Workouts?

Spinach is a great choice to include after training. Its antioxidant capacity helps reduce inflammation in the body, leading to better muscle recovery. However, during your post workout meal, you need more calories coming from protein and carbs than what spinach offers, especially if your goal is muscle growth.

For your muscles to grow, you need more calories than your body needs to help with protein synthesis (a costly process). When the body has calories to spare, it can give those extra calories to muscle building. Since spinach doesn’t have any significant calories, you need to include other high-calorie sources.

Spinach doesn’t have the calories or protein to aid in muscle growth. However, it has components like antioxidants and natural plant steroids that boost muscle growth. Just add protein (eggs or protein shakes) and calories (oatmeal, fruits, and rice) when consuming spinach.

Tips For Incorporating Quinoa Into A Bodybuilding Diet

If you don’t know how to include more spinach into your bodybuilder diet. Here are some tips:

Add Them To Your Shakes

One way to have your spinach is to add them to your shakes. By adding them to your smoothies, you can increase your nutrient intake.

Also, adding them to a blender, it aids in your digestion. Since it shreds the spinach, it makes it easier for your body to digest.

To save up time during your day, you can create packets of your favorite smoothie ingredients and place them in the freezer. That way, with everything portioned (fruits and veggies), it will be easier for you to grab and go.

Iron (in spinach) and calcium (in dairy) compete for the same transportation system in the body. Calcium decreased iron absorption by an average of 50%. Therefore, when you are having spinach, make sure to avoid any dairy product that is high in calcium to prevent nutrients from not being absorbed.

Thus, when you are having a shake, make sure that it doesn’t contain any milk or dairy product. Make it in an almond base shake instead.

Have It As A Salad Base

Instead of having lettuce as a base for a salad, switch it up for spinach. Spinach has more nutrients to offer than lettuce.

Add a teaspoon of olive oil and massage the spinach for a couple of minutes to increase the nutrient intake and make it smoother.

You can even do this with fresh spinach to make it softer and easier to digest.

Ecdysterone is a natural plant steroid found in spinach. It has a similar effect to the steroids in our body. These “natural steroids” seem to improve strength, muscle mass, and endurance. It doesn’t have the same side effects of misusing steroids like kidney problems, liver damage, and heart problems.

Does Spinach Get You Ripped?

Spinach can help your muscles grow. Thanks to its natural steroids and nitrate levels (which increases blood flow, more oxygen, and nutrients get to your muscles). However, you need protein (which spinach doesn’t have) found in eggs, chicken, fish, and meat to help your muscle repair and grow.

Does Spinach Have Protein?

​​Spinach doesn’t have a significant amount of protein. One cup of spinach has less than 1 gram of protein. If you are looking for foods high in protein, opt for protein shakes, eggs, chicken, fish, meat, or Greek yogurt.

Learn More About Other Vegetables For Bodybuilding:

Is Eating 3 Protein Bars A Day Bad? (A Dietician Answers)