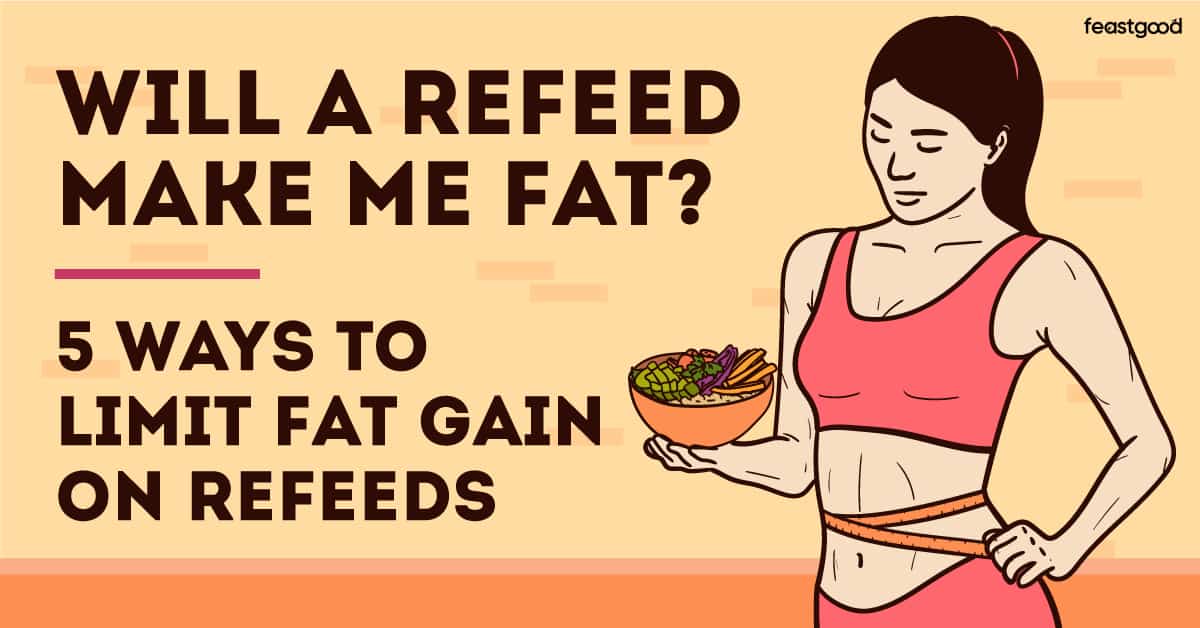 A refeed is a planned increase in calories that is utilized by those who are dieting.  But many people implementing refeeds are worried that by increasing their calories in the short term, they will get fat.

So, can refeed days make you fat? It is unlikely that fat gain would occur while refeeding because to gain fat we would have to consume a surplus of 3500 calories above maintenance calories, and a refeed is a controlled increase only to maintenance calories.

In fact, refeeding can lead to higher amounts of fat loss over time when executed correctly (which I’ll explain below). However,  if we fail to follow certain refeeding guidelines then the potential for fat gain to occur increases.

Should You Be Concerned Refeed Days Will Make You Fat?

It takes around 3500 calories above our maintenance levels to gain a pound of fat and this is typically something that occurs over a week and not in just 1 to 2 days.

Gaining fat is more likely to happen with a “cheat day” that individuals often use as an excuse to eat whatever they want in whatever quantities they want. Refeeds do not pose the same odds of gaining fat because they are still tracked and monitored to ensure the proper intake is met.

To learn more about the differences between cheat days and refeed days, check out my other article Refeed vs Cheat Day: Differences, Pros & Cons.

“I Weigh More After Refeed Days ‒ Does That Mean I Gained Fat?”

It is normal to weigh more following a refeed because we are eating additional carbohydrates, but this weight gain is not due to increased fat mass.

Instead, the increased weight on a refeed that we see on the scale is water weight, which is caused by additional water retention because with every gram of carbohydrate that we consume, we also store 3 to 4 grams of water.

Following a refeed day, if we go back to a deficit as planned we will lose this additional water within 2 to 3 days and our weight should return to baseline levels or potentially lower.

The 5 ways to limit fat gain on refeed days are:

Having protein intake set at 1 gram of protein per pound of body weight is ideal for retaining muscle mass, which is important because the more muscle mass we have the higher the numbers of calories we burn per day.

Additionally, keeping protein intake elevated will increase the number of calories we burn just to digest it. This is called the thermic effect of food, and you can read more about this here.

Lastly, the more of our daily calories that come from protein, the fewer calories we will have to allocate to carbs and fats which are more readily stored as body fat compared to protein.

That being said, we are intentionally increasing our carbohydrate intake while refeeding rather than having a carbohydrate free-for-fall, so the increase in protein is more used to get the metabolic benefits of consuming protein (the thermic effect of food and the maintenance of our muscle mass).

Keeping fat intake low is beneficial for reducing fat gain while refeeding because fats are the least important macronutrient while refeeding and it also has the highest amount of calories per gram.

Therefore limiting our consumption allows us to focus more on carbohydrates and protein, which have the highest potential for refeeding benefits such as increased satiety, energy levels, diet adherence, and mood.

Additionally, limiting our fat intake results in us eating foods that are lower in calories which means that we can eat more of them before reaching our daily calorie goal.

This can help us feel more satisfied because we’re consuming a larger volume of food than we would if more of our calories were coming from smaller serving sizes of fats.

A refeed is designed to be a controlled increase in calories and therefore to stay on target we should continue to track our intake to be as accurate as possible.

If we’re not tracking our intake then we increase the likelihood of eating more calories per day than our maintenance calories, which would put us in a caloric surplus and potentially lead to weight gain.

Curious to know how many calories you should be eating on your refeed day?  Go to our Refeed Calculator.

4. Adhere To A Maintenance Level Of Calories

Sticking to a maintenance level of calories ensures that we reduce our risk of fat gain as much as possible.

The goal with a refeed is to get us out of a deficit by bringing us to maintenance which would not result in any fat gain, but if we allow ourselves to get into a surplus then the potential for gain does increase but probably not to the extent that we may think.

If we’re eating below maintenance then we won’t get the same benefits from the refeed that we would if we were to eat at maintenance because we’re not actually replenishing our depleted energy stores, increasing leptin levels, or giving ourselves a mental break that we need to be successful.

5. Return To A Calorie Deficit Immediately After Refeeding

One of the main reasons that people could gain weight while refeeding is if they allow their refeed to spiral out of control into a binge eating period that lasts for days or weeks on end.

The issue isn’t refeeding itself but instead our execution of the refeed. If we were to execute the refeed as planned, and then return to the deficit afterward then the potential to gain weight would be basically non-existent.

A refeed itself will not lead to fat gain, especially if we follow the principles outlined above. However, if we allow a refeed to turn into an extended surplus of calories and we do not return to a deficit as planned, then the potential for fat gain increases.

Does Creatine Make You More Vascular? (What Science Says)