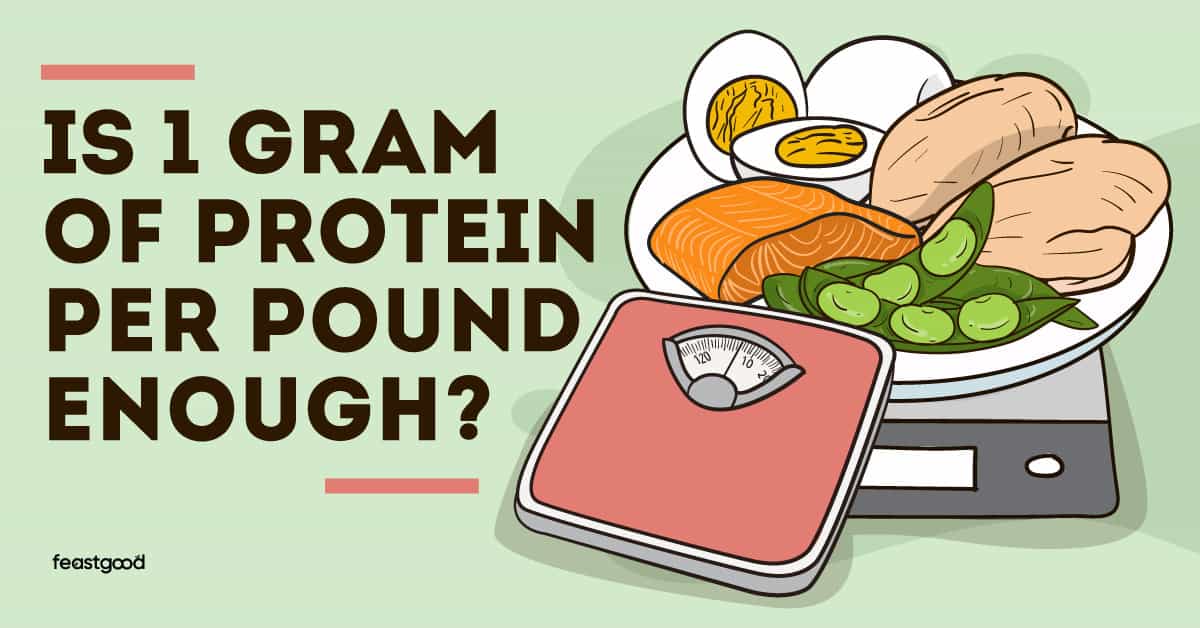 Eating 1 gram of protein per pound of bodyweight has become the standard recommendation for daily protein intake; however, whether this is still a valid recommendation or not is up for debate.

It’s important to see what the science suggests to determine whether you need less than, equal to, or more than 1 gram of protein per pound of bodyweight to reach your goals.

Where Does The 1 Gram of Protein Per Pound Come From?

Although eating 1 gram of protein per pound seems to be the common recommendation amongst active individuals, most scientific data does not support this suggestion.

Most research indicates that eating around 0.82 grams per pound of bodyweight (even for active individuals seeking to build muscle) is sufficient enough to benefit body composition.

However, the recommended amount of protein increases for individuals looking to change their body composition (i.e. lose fat), build muscle, or for older individuals since protein synthesis typically decreases with age.

Since there is research that supports athletic individuals consuming up to 0.91 grams of protein per pound of bodyweight, it is likely that the 1 gram/pound recommendation came from this and was rounded up to keep calculations simple, along with being on the “safe side” of ensuring an individual is getting more than enough protein.

For this article, we are going to focus on how much protein is optimal for active individuals who wish to build muscle and optimize body composition, and whether 1 gram of protein per pound is necessary.

1 Gram of Protein Per Pound: What’s The Controversy?

It is very important to remember that protein intake is not a one size fits all, and the amount of protein that is right for each individual should be determined by individual differences and goals.

These individual differences are your age, height, weight, body composition, and activity level.

Optimal protein intake will also depend strongly on whether you have the goal of losing weight, maintaining, or putting on muscle.

The controversy with this topic lies mainly with the question of whether eating 1 gram of protein per pound is necessary, or if the same outcome can be achieved with less.

There are a couple of reasons why some might argue that eating 1 gram of protein per pound of bodyweight is not optimal, such as:

1. Eating a High Protein Diet can be Hard to Maintain

Eating a high-protein diet can be difficult to maintain, and this is particularly true for someone who is just starting their fitness journey and has not previously paid attention to their protein consumption.

For example, if a 165-pound female was previously eating an average protein intake of around 0.6 grams per pound (about 99 grams), then making the jump to 165 grams per day could prove to be quite challenging. This individual would likely still benefit and put on muscle from a less drastic increase to 0.82 grams per pound (about 135 grams).

For this reason, making the large jump straight to 1 gram of protein per pound may be unrealistic and discouraging for individuals who are just starting out.

Many high protein diets result in a decreased consumption of both carbs and fats to keep calories balanced. Since dietary fat is critical for hormone production and carbs are necessary for energy, not having enough of these two macronutrients could negatively affect your health.

Additionally, protein is very satiating so those who are trying to consume large amounts of protein based on their body weight (ex: 300lb individual aiming for 300g of protein) are often so full that they fail to include enough fruits and vegetables to maintain their health.

For these reasons, eating 1 gram of protein per pound has been a source of controversy within the fitness industry.

So, let’s dive into the research to discuss whether it is even necessary to consume this much protein.

While there are numerous studies on the optimal protein consumption for maintaining/ building muscle, I am going to focus on 2 specific studies that indicate eating 1 gram of protein per pound of bodyweight might not be necessary, along with 1 study that states a protein intake of slightly over 1 gram/ lb being the most optimal for athletes.

Study #1: Protein Intakes Beyond 0.82g/lb BW Are Only Necessary When Dieting

In this particular 2011 study, 0.82 grams of protein per pound of bodyweight per day was found to be the upper limit that benefited increases in lean mass.

This study found that protein intakes above 0.82g/lb BW did not produce significantly different results in terms of muscle-building potential.

However, the study does suggest that those who are dieting to lose fat should have a high protein intake (between 0.82 to 1.1g/lb BW) to retain muscle mass.

Study #2: Protein Intakes Beyond 0.7g/lb BW Did Not Contribute to Further Muscle Growth

This 2017 meta-analysis concluded that while protein supplementation significantly increased muscle strength and size in resistance-trained individuals, a protein intake higher than 0.7 grams per pound did not lead to any further RET (resistance exercise training) muscle gain or changes in fat-free mass.

Key Takeaway: A protein intake above 0.7g/lb BW does not seem to result in further increases in muscle gain even when paired with resistance exercise, so it may not be worth eating more than 0.7g/lb BW.

Study #3: Energy Restricted Athletes Could Benefit From Increased Protein Intake of up to 1.4g/lb BW

Unlike the studies mentioned above, this 2014 study indicates that a higher protein intake for lean and trained individuals is optimal for increased performance and body composition.

A high protein intake was shown to be particularly beneficial for participants that were pursuing body recomposition and in a calorie deficit (eating fewer calories than is necessary to maintain weight).

This study outlines eating as much as 1.4 grams per pound of lean body mass for the best results.

Key Takeaway: The protein needs for resistance-trained, lean individuals who are calorie-restricted may need to be closer to 1.4g/lb LBM for the best results.

In summary, there are conflicting studies regarding optimal protein intake.

Who Should Consume 1 Gram of Protein Per Pound?

Based on current evidence, eating 1 gram of protein per pound of bodyweight may only be beneficial for two groups:

Active individuals who are trying to put on muscle mass may benefit from a protein intake of 1 gram per pound of bodyweight, especially those who find it difficult to gain muscle.

2. Those Trying To Lose Weight Without Losing Muscle Mass

Others that may benefit from a 1 gram per pound of bodyweight protein intake are those who want to lose fat while retaining as much muscle as possible.

To lose weight, you have to limit your carbohydrate and fat intake, which could leave you hungry and wanting to give up. Since protein is quite filling, high protein diets during a weight loss phase have proven to be beneficial.

Who Should Consume Less Than 1 Gram of Protein Per Pound?

Research suggests that those who need less than 1 gram per pound are:

Those who are sedentary for most of the day and do not participate in exercise activity likely do not need to consume more than 1 gram of protein per pound a day.

However, it’s still important for sedentary individuals to consume enough protein to support their overall health and muscle mass.

To ensure you are consuming enough, aim for a minimum of 0.36 grams per pound (remember that this is the minimum recommended intake, and not necessarily what is optimal).

2. Those Consuming Enough Calories To Maintain Their Weight

Those who are eating enough calories to maintain their weight (or more) can likely also get away with consuming less than 1 gram of protein per pound without losing muscle.

When you’re eating enough calories for weight maintenance there is less risk of losing muscle since there is plenty of energy available and no need to use muscle as an energy source; therefore, protein needs are lower.

The research also suggests there is not much benefit in muscle building after 0.82 grams per pound, so even an intake of 0.82g/lb BW can help those eating at maintenance or above to build muscle.

3. Those With Pre-Existing Medical Conditions or Health Issues

For certain individuals who have pre-existing health conditions such as kidney issues, eating a higher protein intake of 1 gram/lb or more can exacerbate these health conditions. In fact, studies show that extended high protein diets can worsen kidney function in those with kidney disease.

In addition to this, a 2016 study illustrated how an extended protein intake exceeding 0.9g/lb could potentially lead to health issues such as intestinal discomfort (indigestion), headaches, exhaustion, irritability, and dehydration.

Of course, this can vary depending on the individual, and would likely be a result of not eating a balanced ratio of macronutrients more so than from eating a high protein intake.

In certain cases, an individual might turn too heavily to processed protein supplements rather than whole foods when aiming for a higher protein target.

While these supplements can be a great tool, certain brands can also contain large amounts of fillers and artificial ingredients that also have the potential to affect your health (or worsen pre-existing health issues, most notably digestive disorders)

Who Should Consume More Than 1 Gram of Protein Per Pound?

While most research suggests that 1 gram of protein per pound of bodyweight is more than enough (and potentially unnecessary), it is important to understand that scientific studies don’t always translate over to every single individual.

By this I mean, certain people might find they need to eat a higher amount of protein than what is considered normal to see the results that they want.

Those who may need more than 1 gram of protein per pound of bodyweight are:

If you consider yourself to be a “hard gainer” (someone who has a difficult time putting on muscle) and you have tried eating at the 1 gram/ pound mark with no success, you might want to try increasing your protein intake slightly to see results.

2. Those Who Are Severely Overweight

A higher protein intake may also be appropriate for individuals who are severely overweight and are looking to lose weight.

Since protein is the most thermogenic macronutrient (meaning that it burns the most calories through digestion) and it is highly satiating, it can help make weight loss more manageable.

Is 1 Gram of Protein Per Pound Good for Losing Weight?

Eating 1 gram of protein per pound can be beneficial for weight loss because protein is highly satiating and it will help keep you full when calories are restricted. Protein also helps to maintain lean muscle mass and burns more calories through digestion than other macronutrients, both of which are important for losing weight.

Is 1 Gram of Protein Per Pound Good for Building Muscle?

What To Read Next:

Muscletech Whey Protein Review: Is It Good? (I Tried It)

What To Mix Creatine With (8 Examples + Liquids To Avoid)