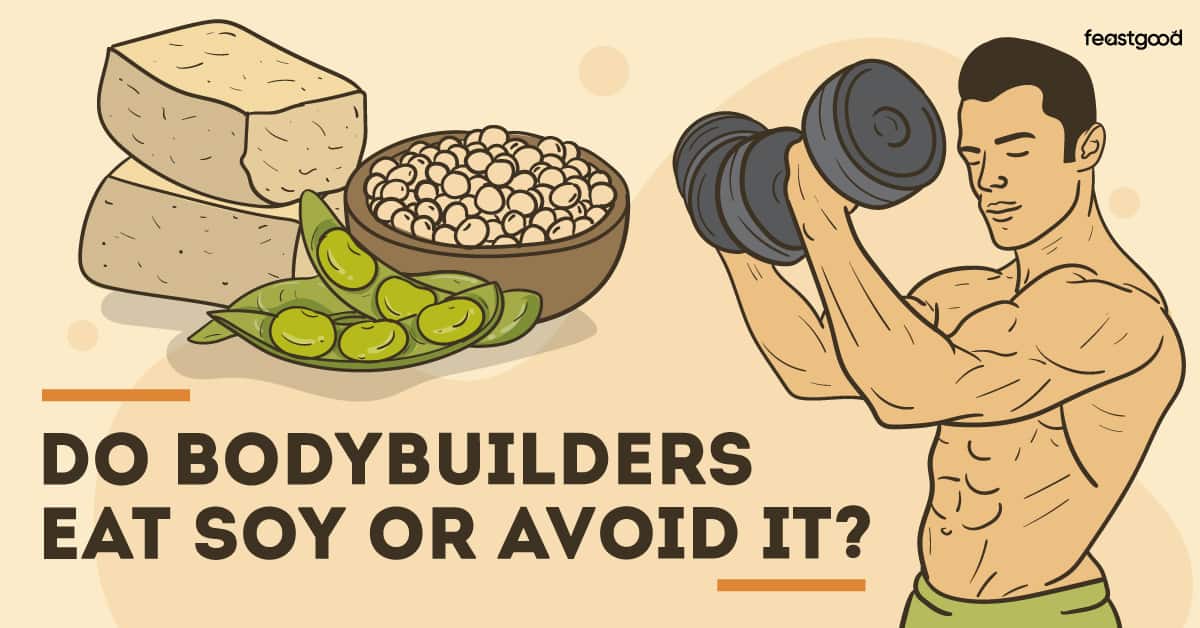 A common worry among bodybuilders is that, while soy is high in protein, it can also increase estrogen levels, negatively impacting your ability to put on muscle mass.

Since soy exists in many forms, from powders to naturally occurring in several common bodybuilding foods, I wanted to investigate whether bodybuilders needed to be concerned with eating soy or not.

If you’re new here, I’m Brenda, a Registered Dietitian who works with bodybuilders.

So, can bodybuilders eat soy? Bodybuilders can eat soy as it’s a high-quality protein offering all 9 essential amino acids your body needs for muscle growth and recovery. For bodybuilders following a plant-based diet, soy is especially vital to consume. Although soy has natural estrogens, research shows it won’t decrease your testosterone levels.

In this article, I will explore everything you need to know about soy and bodybuilding, including:

The first thing we need to know about soy is that it comes in many forms, and not each form of soy is the same.

You can get soy protein from soybeans but also from foods like edamame, tofu, tempeh, miso, soy sauce, and soy milk.

In terms of supplementing, there are three different types of soy protein supplements:

Soy concentrate is made by removing part of the carbs in soy and all of the water.

It is 70% protein, while the rest is fats and carbs. You find it in powdered form, and it is usually added to foods to thicken it or add more protein.

Soy isolate is further processed from the soy concentrate.

Most carbs and fats are removed, making it the purest form of soy protein with over 90% protein.

It is often used in the food industry to increase the protein content of certain foods, including protein bars, dairy alternatives, and protein powders.

Textured proteins made from soy concentrate to create imitation meat like chicken. Although it depends on the brand, it is composed of 50-70% protein.

It is often used to create vegan or vegetarian recipes. For example, you can buy Bob’s Red Mills Textured Soy Protein to make vegetarian dumplings.

Why Does Soy Have A Bad Reputation With Building Muscle?

One of the main concerns, when bodybuilders add soy, is its possible interference with testosterone levels.

Early hypotheses have been made that, due to isoflavones, eating soy may lead to more body fat and less muscle mass because of the increase of estrogen in the body. The worst nightmare for a bodybuilder.

The two studies conducted in 2001 and 2005 initially caused concern for those eating soy.  However, as you’ll see later, more current research has debunked these studies.

In a study conducted on rats in 2001, they were given 600 mcg of isoflavones over five weeks.

The results showed that they had a decrease in testosterone levels, and they had high levels of isoflavones in their blood.

Is Soy REALLY that Bad For Bodybuilding?

The science of soy has changed since those early studies, and the most up-to-date research broadly concludes that soy is not inherently bad for bodybuilding, nor does it impact hormone levels in men.

A 2021 meta-analysis review gathered information from 41 studies that talked about soy and testosterone.

Consuming 100 mg of isoflavones is a very high dose. It would represent eating more than 3 cups of edamame or having an average of 15 oz of tofu per day, which would not be a realistic amount of soy to eat daily for bodybuilding.

One Potential Con of Eating Soy From Bodybuilding

While much of the talk about soy and bodybuilding has revolved around hormone levels, which we’ve just debunked, there is one drawback of eating soy isn’t as well known.  It has to do with soy’s impact on reducing nutrient absorption.

Soy protein has a component called phytates. Phytates are often referred to as antinutrients because they prevent the absorption of certain nutrients. They are found in soy, legumes, whole grains, nuts, and seeds.

Phytates can reduce the absorption of nutrients like iron and zinc. Soy contains 1-2% of phytates per 100 g, which represents a reduction of 5-15% of the availability of iron and zinc.

A low iron intake could develop into anemia that can interrupt the oxygen supply to your muscles. Additionally, an insufficient supply of zinc can weaken your immune system.

This doesn’t mean that eating soy will prevent all your iron and zinc absorption (only 5-15% will not be absorbed). If you are going to consume soy, make sure to add other iron sources and zinc sources (chicken, meat, fish) in other meal times to compensate for this slight decrease.

Is Soybean Effective As A Complete Protein?

For example, rice is high in cysteine and methionine but low in lysine. However, beans are very high in lysine. Thus, you get a complete protein when mixing rice and beans.

Although some hardcore bodybuilders might tell you that soy is a little bit low in an amino acid called methionine, a study showed that when compared to whey protein, you can obtain a similar amino acid composition and still muscle gain.

Is Soybean Enough For Gaining Muscle?

Soy has been widely studied to determine if it is suitable for gaining muscle. Studies have shown that comparing soy protein vs animal protein for muscle gain in both cases, muscle strength was also increased.

In a study comparing soy isolate on its own, soy combined with whey, and whey on its own, the results determined no significant difference between them. Participants all had an average of 1.0-1.5 kg of weight gain over 12 weeks.

Are There Other Benefits To Eating Soy As A Bodybuilder?

Not only can soy help with muscle building, but there are also other benefits that you can obtain from adding some soy to your diet if you are a bodybuilder.

For those in a cutting phase, soy protein has weight loss benefits too.

In a study, 30 overweight or obese men were given a plant-based diet or an animal protein diet. They both had the same macro breakdown 40% carbs, 30% protein, and 30% fats.

They saw an average weight reduction of 2-2.5 kg in 3 weeks for both diets. Additionally, their satiety levels increased (i.e. they weren’t as hungry throughout the day), which prevented constant snacking.

This study shows that no matter the protein you decide to use (plant-based or animal), they promote weight loss and appetite control, which are crucial characteristics for a bodybuilder in a cutting phase.

Another benefit of soy is its high content of the amino acid arginine. Arginine stimulates the production of nitric oxide, which increases your body’s blood flow. Increased blood flow means more oxygen and nutrients are carried to your muscles.

In a study on 25 cyclists and triathletes, they were given a placebo or a 30 g soy protein supplement before a 20 km time trial. It was found that those who took the soy supplement had greater blood flow, which led to a faster completion time than those in the placebo group.

It is said that over 65% of the population has some trouble digesting lactose. This is due to a decrease in the enzyme (lactase) that breaks down lactose. Although some people can take whey or casein without having any gastrointestinal repercussions, some people are less tolerable to dairy.

Soy has the benefit that it is lactose-free, ideal for those that have lactose intolerance. It can also be helpful for those bodybuilders that have an allergy to dairy proteins.

When To Eat Soy?

Soy protein is a fast digestion protein, which means that you can take it before a workout without worrying too much about having a gastric problem like you would if you had beef or chicken.

Thus, adding soy before a workout can supply a steady protein release to perverse your muscles during a training session. Additionally, the high arginine content can increase your blood flow, which provides more oxygen and nutrients to your muscles.

After a workout, you need to have a protein source to help repair and grow your muscles. Soy is an excellent protein option to include that can help promote muscle growth. Also, thanks to its antioxidant properties, it helps reduce inflammation, leading to better muscle recovery.

Finally, a good moment to include soy is during snack time.

Having a steady supply of protein every 2-3 hours keeps your satiety levels high (which prevents snacking) and helps preserve your muscle mass.

How Much Soy Should You Eat?

Currently, there is no upper daily limit for soy protein for men. As long as you don’t add it in every meal and have other protein sources varieties, you can have a couple of soy products during the day.

For women, on the other hand, a study showed that having more than 100 mg of isoflavones could increase the risk of developing ovarian cancer. This represents around 125 grams of soy protein powder (around two scoops per day).

For a bodybuilder, the most important thing is to consume the right amount of calories during the day. Whether you are in a bulking phase (caloric surplus), or a cutting phase (caloric deficit), reaching those calories is essential.

Also, having the right amount of protein is crucial. An average of 1.6 to 2.0 grams of protein per kilogram of body weight is essential for a bodybuilder. As long as you reach this amount daily, you are good to go with soy and other protein sources.

Soy has no impact on hormone levels in men. Thus, it won’t reduce your testosterone levels, and it won’t affect your gains. For women, it could influence hormonal changes for women, which means that female bodybuilders need to be careful with how much they consume.

Those following a plant-based diet can help provide the essential amino acids you need for muscle growth. However, don’t make it your only protein source during the day. Make sure to add some variety and add different foods throughout the day.

What To Read Next

Does MCT Oil Cause Headaches? (What The Science Says)