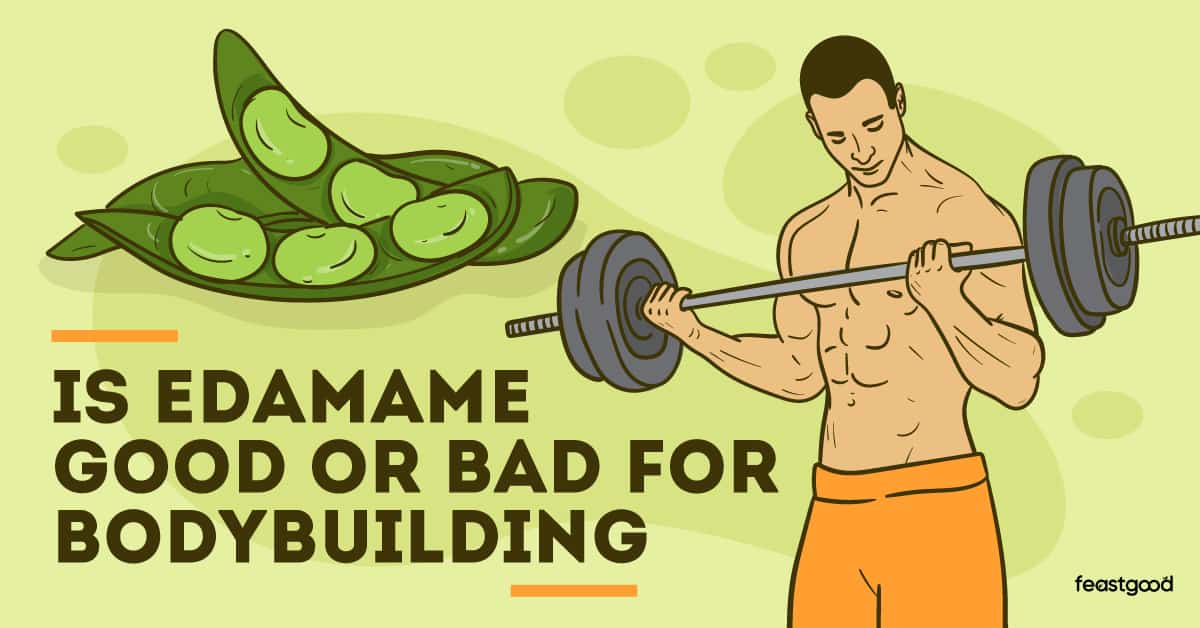 As a source of plant-based protein, edamame is often added to a bodybuilder’s diet to help them reach their higher than average protein intake. However, some questions arise about adding too much edamame to a bodybuilding diet because of its soy content.

As a registered dietician, I can see very few reasons, if any at all, not to include edamame as part of your bodybuilding diet.  However, you’ll still want to know the best meal timing for edamame and how much you should eat to maximize its benefits.

In this article, I will cover everything related to edamame and bodybuilding, including:

One cup of cooked edamame (160 g) has the following nutritional content.

Edamame is a moderate-calorie food since it has more than 100 kcal per 100 g of food.

The advantage of being a moderate-calorie food is that it can be modified according to your phase of training.

In both scenarios, it would be important to measure and track how much edamame you’re eating so that you don’t overeat or undereat according to your caloric requirements.  Use an app like MacroFactor to track your intake (click to check out my review).

Not many foods are like edamame in terms of their macronutrient profile as it contains protein, carbs, and fats in large quantities.

For those bodybuilders trying to reduce their animal protein intake or following a plant-based approach, edamame is an excellent source of protein to include.

One cup of edamame has the same amount of protein as 3 large eggs or almost one scoop of protein powder.

Even if you don’t follow a plant-based diet, but you struggle with eating enough protein throughout the day, edamame is a great food to boost your protein intake without relying on the same bodybuilding foods over and over again (i.e. chicken, beef, tuna).

Edamame has 12 g of fat per cup. The fats found in edamame are mostly the healthy type (unsaturated). This means that it has fats that support heart health.

Although edamame contains 13.8 g of carbs per cup, most of it is fiber, which is the undigestable part. This means that it only has 5.8 g of carbs (i.e. net carbs) that your body can use.

For a bodybuilder that is following a low carb or ketogenic approach, edamame is an excellent food to add.

One of the many benefits of edamame is its high nutrient value.  Here are the top 3 nutrients found in edamame, which have more than 50% of the daily recommended value:

3 Pros Of Eating Edamame For Bodybuilding

Here are three benefits of adding edamame if you are a bodybuilder:

Bodybuilders following a plant-based diet or a vegan approach might find reaching their total protein intake challenging. While adding a protein shake is an easy option, sometimes it gets tiresome including them regularly.

Thus, plant-based options like edamame are an excellent solution for those who have difficulty reaching their total protein requirements.

Additionally, unlike other plant-based options like kidney beans or lentils, edamame has all the essential amino acids your body needs making it a high-quality “complete protein”. This means it has the same qualities as an animal protein, without actually being an animal protein.

Unlike other plant-based proteins, edamame is low in carbs since one cup provides only 5 g of net carbs. Although it technically has 13 g of total carbs, it contains 8 g of fiber. Since fiber isn’t digested in the body, the carbs you use are only 5 g.

Additionally, thanks to its high fiber intake, it provides several benefits such as fighting constipation, making your gut health better, and increasing your satiety levels (the feeling of fullness).

This is incredibly beneficial for people who are trying to lose weight, as oftentimes when calories are restricted people don’t feel satisfied or full after a meal.

Edamame provides 85% of the recommended leucine intake, which is an excellent option for those bodybuilders in a bulking phase looking to add muscle.

Leucine is one of the most essential amino acids for bodybuilders since it is responsible for protein synthesis. This means that it starts the process of creating new proteins for muscle building.

The International Society of Sports Nutrition recommends a 3-4 g of leucine content after training to get the maximal protein synthesis (which means a greater muscle growth).

1 Con of Eating Edamame For Bodybuilding

Although there are several benefits, here is one con you might want to consider if you are adding edamame into your diet.

Edamame can cause gastric problems like bloating, nausea, stomach cramps, and gas for people with a low fiber tolerance. Although there are several benefits of having a high fiber diet (preventing constipation, lowering cholesterol levels, and increasing satiety), some people might not benefit from adding too much of it.

If you have a low tolerance for fiber, make sure to start slow with the fiber intake. Since edamame provides 32% of the daily recommended intake, you might want to start with ¼ or ½ a cup and build it into one full cup.

Additionally, for people with Irritable Bowel Syndrome (IBS), having legumes like beans and edamame might increase symptoms, which means that you need to consume them in moderation or not eat them at all. Make sure to always listen to your body.

One of the most common concerns for people looking to gain muscle is the increase of estrogen levels by adding soy to their diet.

Edamame has an estrogen-like compound called isoflavones. Thus, these are thought to change the hormone levels by increasing estrogen (the female hormone) and decreasing testosterone (the male hormone).

For a bodybuilder this is cause for concern since having a higher amount of estrogen means more body fat and less muscle mass. Hence the bad reputation that has been given to soy products like edamame.

However, studies have shown that eating edamame does not increase your estrogen levels, which doesn’t affect your testosterone levels.

A study was carried out on 61 untrained young men for 12 weeks to compared if soy supplementation had different strenght and muscle gains.

The results were that lean body mass was increased by an average of 1.5 kg in both groups as well as torque strength. Meaning that soy didn’t affect muscle mass results, it actually increased it.

How Much Edamame Beans Should Bodybuilders Eat?

This is a difficult question to answer since there is still not a lot of information regarding the tolerable upper limit when it comes to soy products.

When it comes to the upper limit for men there are still studies that need to be done.

However, even if there is no upper limit for men, remember that it is always good to have some variation in your diet. Don’t rely on it to be the only protein that you are having during the day. Make sure to have different protein sources since each has a different amino acid and nutrient profile.

Can You Eat Edamame Before Workouts?

Edamame is not the best option to include before a workout. Before training, you need fast-acting energy. The body’s preferred energy source is carbs. Since edamame is mostly protein and fats, with little carbs (5 g), it might not give you the energy needed for training.

Additionally, protein and fats take longer to digest, increasing the chance of having bloating and sluggishness during your workout. This can result in having a decrease in your performance.

Before working out, it’s better to focus on fast-acting carb sources like rice, sweet potatoes, and potatoes. If you want to include edamame before a workout, add a small portion (1/4 cup) and then focus on having more fast-acting carbs on your plate.

Can You Eat Edamame After Workouts?

Edamame is a great choice to add after your workout. It has a high protein content (more than 18 g per cup). After training, you need to have a protein source to help repair and grow your muscles. On average, a bodybuilder might need 30-40 g. This can be achieved by consuming 2 cups of edamame.

For those that consider that having 2 cups of edamame is too much, you can opt for a smaller amount of edamame beans, and add another protein source like chicken, fish, or even a protein shake.

Additionally, you need carbs to help replenish the energy lost during your workout.

Is Edamame Good For Muscle Growth?

Edamame is good for muscle growth since it provides the necessary protein (it has almost the same amount as three large eggs), and it gives you the calories you need to have a caloric surplus. Also, it has essential amino acids that help start the process of muscle building in the body.

Tips For Incorporating Edamame Into A Bodybuilding Diet

Whether you are including edamame once in a while or regularly, here are some tips for incorporating it into your diet if you are a bodybuilder.

Eat It Natural or Frozen

Whether natural or frozen, any type of edamame beans is good to have if you are a bodybuilder. People often think that frozen fruits or veggies are not good, but as long as they are natural without any added preservatives or sugar, they are second to best to fresh produce.

For some people, having frozen edamame is a good way of not taking too long in the kitchen for cooking them. This not only saves you money, but it can also save you a lot of time when it comes to meal prepping.

There are several non-caloric options that you can add to edamame to make it tastier. Here is a list of things you might want to try next time.

Those in a bulking phase need to include extra calories in the mix. Here are some high-calorie options that you might want to add.

Make It A Healthy Snack

If you are looking for something to snack on while you work, savory and crunchy edamame is an excellent choice. If you want something crunchy, place them in the air fryer and cook them until they are crunchy on the outside (typically take 10-15 minutes).

Here is a recipe that can help you learn how to make crunchy edamame.

This can replace your regular protein shake as a snack or a canned tuna for those looking to increase their protein during snack time.

Does Edamame Count As Protein?

Yes, edamame can count as a protein. However, while edamame is high in protein (18g per cup), it also has two other macronutrients (carbs and fat). Edamame has 13g of carbs per cup, but because most of its fiber, it only has 5g of net carbs.  Edamame also has 12g of fat per cup.

Learn More About Other Vegetables For Bodybuilding:

Quinoa vs. Brown Rice For Bodybuilding: Which Is Better?

Egg White Protein Shake (Made With 45g of Protein)