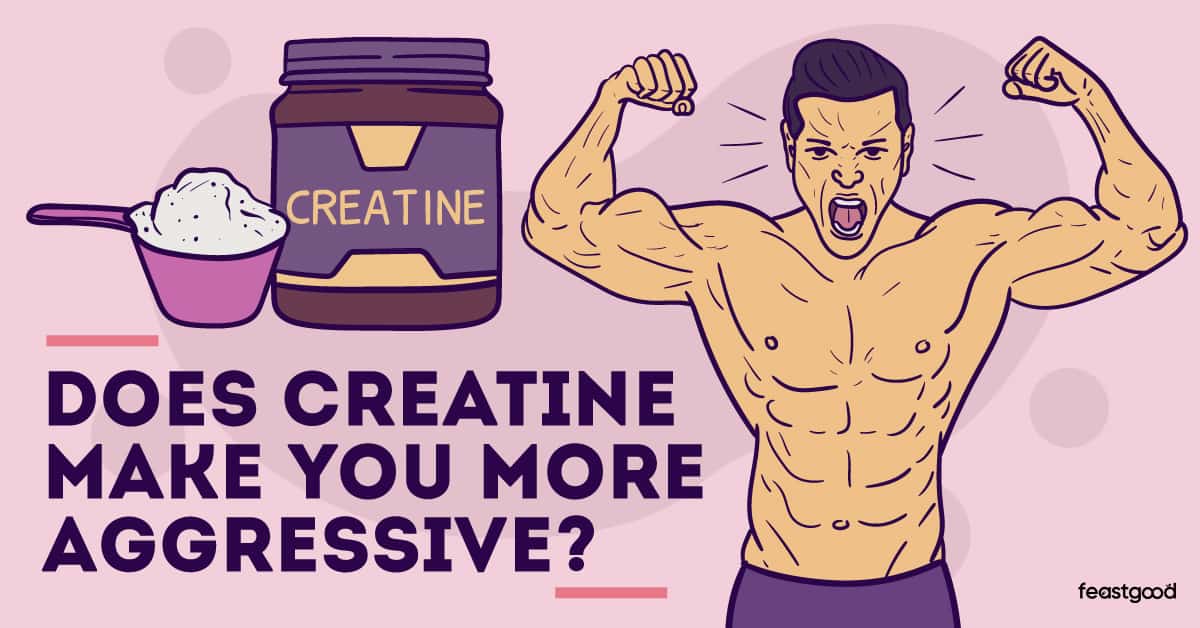 You may be taking creatine and curious about whether it can affect your mood and cause side effects like increased aggression and anger.

Does creatine make you more aggressive? There is no direct causal link between using creatine and it causing increased aggression. Creatine is a natural substance created by the body and stored predominantly in your muscles. Supplementing creatine increases these stores in the body and there are minimal side effects when using it within recommended doses.

We do store a small percentage of creatine in our brain and there has been some discussion around the impacts of creatine on cognitive functions like emotion.

In this article, I’ll explore whether there’s plausibility to creatine causing more aggressive emotional responses when supplementing with it.

Want to know all the known side effects of creatine? Check out our guide on Are There Risks of Taking Creatine?

Creatine use is not associated with aggression or mood swings, but there are many people online talking about their personal experiences with creatine suggesting that there is a connection.

So, if this is something you’re experiencing, you’re:

From what I’ve observed across internet forums, people querying creatine causing aggression have commented that:

Reading through these anecdotal reports, a couple of themes were evident:

Learn more about creatine in the article Most Common Types of Creatine.

I’m Feeling More Angry:  Is This Because Of Creatine?

While the majority of research undertaken on creatine has focused on its ability to enhance sport performance and muscle strength, there has been some exploration into creatine and its effects on brain function and cognitive development.

Creatine supplementation can enhance cognition, especially in people with creatine deficits in their brains. These deficits are caused by anything from sleep deprivation to Alzheimer’s disease and depression.

As well as storing creatine in your muscles and kidneys, you also store it in your brain and it’s been found that some psychiatric conditions can disrupt the body’s ability to transport creatine and its associated energy sources to the brain. Perhaps confusion around this has led some to question whether creatine could make you feel more aggressive.

Research has found that instead of creatine supplementation being the cause of mood disruptions or cognitive issues, in many cases it could provide a therapeutic benefit to those who suffer from certain psychiatric issues. Some preliminary studies indicated:

The extent of the impact of conditions like bipolar is limited though. It has been proposed that there should be more investigation into creatine dosage and duration for people suffering from psychiatric illnesses to understand when, if and how creatine could be of benefit.

The overwhelming evidence suggests that for the average person creatine is safe when consumed within recommended dosages and unlikely to cause aggression.

If however, you have, or suspect you have, a mental health condition and you have been using creatine and noticing changes in how you’re feeling, consider consulting with your doctor to ensure it is safe and appropriate in the context of your medical history.

Other Reasons Your Aggression Is Increasing

If you are finding your aggression has increased, while creatine may be the unlikely culprit, consider whether any of the following could be contributing to changes in your mood:

Supplements like pre-workout which contain high amounts of caffeine could leave you feeling more aggressive.

For example, an average cup of coffee has around 100mg of caffeine, compared to an average scoop of pre-workout containing up to 400mg caffeine. The likely effect of this is feeling hyper and energized to smash your workout.

So where you’re consuming creatine with high doses of caffeine, you might find yourself experiencing increased feelings of aggression.

Ingredients in Your Creatine Supplement

If the supplement you use for creatine is, for example, a hybrid of pre-workout and creatine, then there could be other ingredients causing you to feel more aggressive, namely caffeine.

As discussed, caffeine could be a contributing factor affecting your aggression levels.

Anabolic steroids like testosterone have been connected to increased aggression in people. So if you are taking a steroid there is a higher probability this could be causing you to feel more aggressive.

If this resonates with you, studies suggest that mood disturbances associated with steroids are typically reversible. However, any queries or concerns should be raised further with a medical professional.

Remember, creatine provides your muscles with increased energy resources so you can work harder in the gym. This is very different from steroids which are synthetic hormones promoting muscle growth, fat loss, and faster recovery.

Reactions to Your Performance

With extreme bursts of exertion or effort, you can generate a lot of energy in the body, sometimes leading to heightened emotions. This could play out as ultimate euphoria when you achieve that max 1RM you have been chasing for months or it can be extreme frustration, even anger, when you miss a lift.

It is hard to remove the emotion from something you are pouring all your energy into when it doesn’t go your way. I have missed a deadlift or two in my time and carried that frustration through the day; how you assess your performance can certainly impact your mood.

It is completely natural for you to want to explore how various supplements can support your performance goals, and it is also common to experience side effects when introducing new products or trying different supplement regimes.

Sometimes supplements can interact with each other causing these side effects, so review your supplement regime holistically to ensure it is providing the best benefit in the best way. Experts are well placed to guide you through this.

Not drinking enough water leads to dehydration. Dehydration levels of just 1.36% can make negatively impact your mood. Studies have also shown that dehydration increases feelings of fatigue. When you’re more tired, you’re likely to be more irritable as well.

And while creatine on its own won’t make you dehydrated, drinking enough water when supplementing with creatine is still important. Creatine draws water into your muscle cells. If the rest of your body doesn’t have enough water, your organs may not function properly, and your performance may suffer.

To avoid dehydration, aim for 3-5 liters of water per day when supplementing with creatine.

Is It Possible To Have Mood Swings While Taking Creatine?

Creatine alone will not cause mood swings. If you notice worse mood swings after taking creatine, they are likely due to other causes. These can include increased fatigue due to dehydration, a higher caffeine intake, other ingredients in your creatine supplement that alter your mood, or frustration with your workout.

Does Creatine Make You Irritable?

Irritability is not known to be a direct side effect of creatine. However, you may feel more irritable after taking creatine if you take it with a high dose of caffeine and then experience a sudden energy crash. You can also feel irritable if, for example, you take creatine before your workout and then have a bad training session.

{“@context”:”https://schema.org”,”@type”:”FAQPage”,”mainEntity”:[{“@type”:”Question”,”name”:”Is It Possible To Have Mood Swings While Taking Creatine?”,”acceptedAnswer”:{“@type”:”Answer”,”text”:”Creatine alone will not cause mood swings. If you notice worse mood swings after taking creatine, they are likely due to other causes. These can include increased fatigue due to dehydration, a higher caffeine intake, other ingredients in your creatine supplement that alter your mood, or frustration with your workout.”}},{“@type”:”Question”,”name”:”Does Creatine Make You Irritable?”,”acceptedAnswer”:{“@type”:”Answer”,”text”:”Irritability is not known to be a direct side effect of creatine. However, you may feel more irritable after taking creatine if you take it with a high dose of caffeine and then experience a sudden energy crash. You can also feel irritable if, for example, you take creatine before your workout and then have a bad training session.”}}]}

Plenty of evidence suggests that creatine has an excellent safety profile. There are no documented clinical side effects or risks indicating that creatine will cause increased aggression for the general population of users.

It is prudent to call out that if you suffer, or have suffered, from a psychiatric illness, consider speaking with your doctor to ensure creatine is appropriate for you to use.