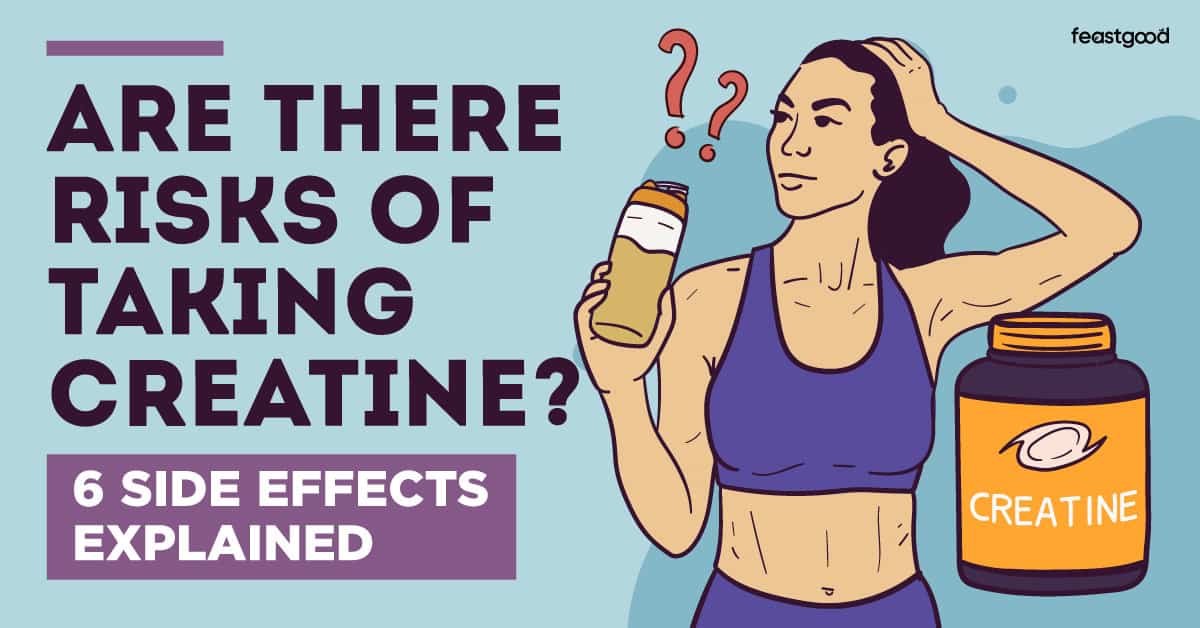 As a nutrition coach, I spend a lot of time explaining to my clients which supplements are worth taking, creatine being one of them.

However, many of my clients are worried about whether it’s safe to take creatine and if there are any side effects to be aware of.

According to current research, there are no serious risks associated with creatine supplementation for healthy individuals.  However, if you’re living with a chronic condition or taking other medications, then you should consult your doctor before taking creatine.

Although there are no serious risks, as I’ll explain below, some issues can arise if you’re not following the proper dosing recommendations.

Creatine is an energy source that you already have stored within your body but in smaller amounts.

By supplementing with creatine, you can increase the amount of creatine stored in your muscles to provide longer-lasting energy, especially during high-intensity exercises like lifting, sprinting, and jumping.

Having more energy means that you can train harder in the gym and see better improvements in strength and muscle growth than you would without creatine supplementation.

Is Creatine Safe? Our Take

Creatine is safe to take and I have no hesitation recommending it to my clients because it is possibly the most widely-researched supplement on the market.

Studies suggest that short-term and long-term creatine supplementation is safe and has many benefits.

However, if you are questioning whether creatine is right for you based on your health history, then talk with your doctor before supplementing.

Factors To Consider Before Taking Creatine

There are some key factors to consider before jumping into creatine supplementation:

If you’ve had kidney issues then it is best to avoid creatine supplementation.

The researchers of this study did say that it was unclear whether increases in creatinine due to creatine supplementation were giving a false positive for kidney dysfunction for those with kidney disease.

So, there is a need for additional research to form better conclusions.

However, it’s always better to be safe rather than sorry when it comes to your health.

The amount of creatine you take is an important consideration because the research suggests that creatine is safe for short-term and long-term use based on having 3-5 grams of creatine per day.

It is unclear whether higher doses of creatine are safe for long-term use.

However, there is no need to take higher doses as research shows that maintenance doses of 3-8g per day are effective for maximizing the benefits of creatine following a loading phase.

A loading phase involves taking 20g per day separated into 4 doses of 5g for 5 to 7 days to saturate creatine stores more quickly to feel the effects of creatine sooner.

It should be noted that a loading phase is not required for creatine to be effective, it simply speeds up the process.

It is best to avoid taking diuretics (substances that encourage water loss) while taking creatine because creatine functions by pulling water into the muscle cells.

If there is not enough water for creatine to use then its benefits will be limited.

One of the most common diuretics is alcohol, which should be avoided or at least limited when taking creatine to reduce interference effects.

If you’re on medications you should always consult with your doctor or pharmacist to rule out interference effects.

Creatine has been reported to have the following side effects:

Creatine does increase the amount of water you will retain because it pulls water into your muscles, giving you a fuller appearance and perhaps a heavier weight on the scale despite not having gained fat.

During a loading phase you could expect to see a 1-3kg increase in bodyweight due to water retention.

Water retention generally decreases as supplementation continues, but it is more noticeable initially as your body adapts to the supplement.

There is a growing concern for an increased risk of dehydration with creatine supplementation because creatine pulls water out of circulation and into the muscles so that there is less water circulating in the blood.

However, this appears to have been blown out of proportion as simply drinking enough water to quench your thirst negates any risk of dehydration.

In fact, this study on college football players demonstrated that creatine could reduce muscle cramping and the risk of injury associated with dehydration and overexertion.

You’re more likely to notice that you’re thirstier if you’re in a loading phase where you’re consuming larger doses of creatine, but after the initial loading phase, you’re less likely to feel more thirsty apart from working out.

Some individuals have reported that they experienced digestive issues while taking creatine; however, this appears to be isolated to incidents where too large of a dose was taken at one time.

For example, during a loading phase, if you were to take 20g of creatine all at once rather than separating it into 4 doses of 5g throughout the day, you would likely experience some stomach cramping.

However, if digestive issues persist even with smaller doses then you could try a different type of creatine, like Hydrochloride, which is said to be easier to digest.

Some people are worried that supplementing with creatine will make them more aggressive, but there is no evidence supporting this side effect.

There is strong evidence suggesting that creatine supplementation, particularly in women, has been associated with improved mood and lower rates of depression.

Creatine was also shown to have positive effects on those with psychiatric disorders, specifically those suffering with PTSD.

It appears that creatine’s positive impact on mood and emotions is related to its ability to enhance cognitive function by increasing creatine stores in the brain.

Fatigue has been reported as a side effect of creatine supplementation.  However, the fatigue is related to being able to train more intensely, which causes you to feel more fatigued after the fact.

Creatine itself is unlikely to cause fatigue because there is a substantial amount of evidence claiming creatine supplementation delays physical and mental fatigue.

Creatine supplementation has been known to increase hunger, which makes sense because creatine allows you to train harder for longer which would increase the number of calories you burn.

It also increases your muscle mass, and the more muscle you have the more calories you burn per day even while at rest.

To help manage hunger while on creatine, I recommend increasing your protein intake and fiber intake because these will increase satiety.

What Is The Most Common Type of Creatine Supplement

The most common type of creatine is Creatine Monohydrate because it is the most widely studied form of creatine and it has proven to be the most effective type as well.

Noom Review (2023): My Unbiased Opinion As A Nutrition Coach