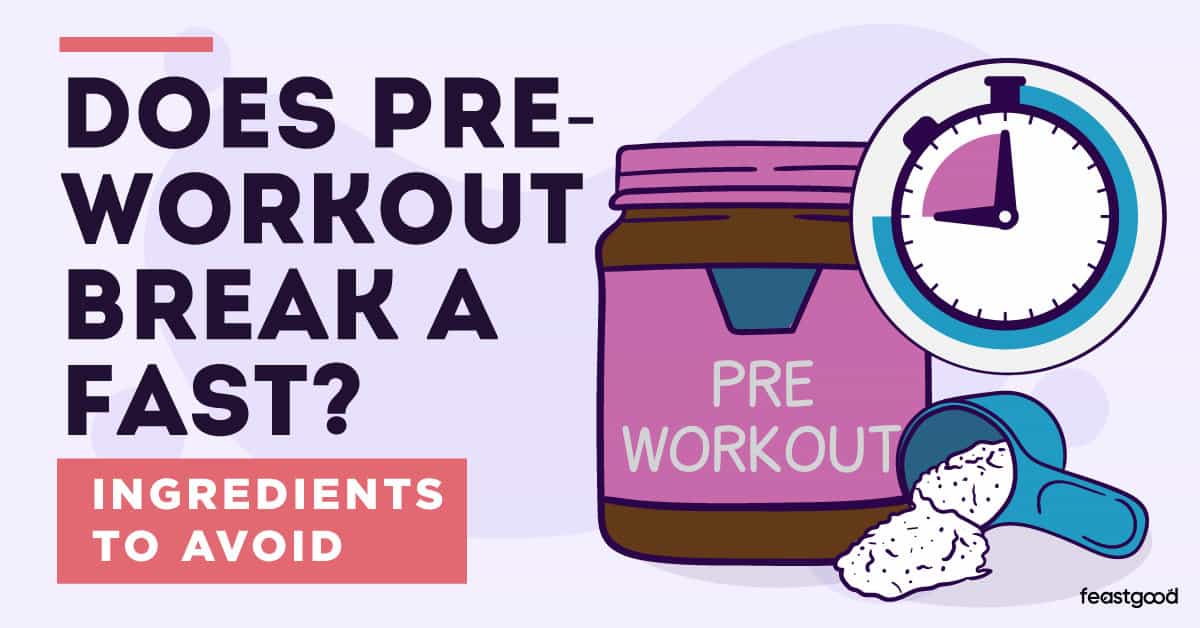 If you’re fasting to lose weight or for other health benefits, you may wonder if taking a pre-workout to enhance your workouts will break your fast.

To choose the best pre-workout while fasting, it’s important to understand the full list of pre-workout ingredients that are acceptable (and which aren’t).

Will Pre-Workout Ruin a Fast?

Pre-workout will only ruin a fast if you’re consuming one with BCAAs or that is sweetened with sugar or other sweeteners that produce an insulin response.

Insulin is a hormone your body secretes in response to a rise in blood sugar levels. Blood sugar rises primarily when food is consumed and broken down into simple sugars during the digestion process.

Insulin then determines whether to use these sugars for energy or to store them for later use. This rise in blood sugar and subsequent insulin secretion breaks a fast because your body isn’t able to continue using its own fat for fuel when these processes occur.

If you’re fasting for weight loss purposes, you want your body to use fat for fuel so you’re losing fat, rather than using the sugar from food for energy and maintaining your fat mass.

Are There Any Risks of Taking Pre-Workout on an Empty Stomach?

When taking pre-workout on an empty stomach, those who are sensitive to caffeine may experience:

Also, if you have a sensitive stomach and pre-workout makes you feel sick, you’re better off skipping the pre-workout supplement before you train to ensure you feel your best for your training session.

Benefits of Taking Pre-Workout While Fasting

The main benefit of taking pre-workout while fasting is that caffeine helps provide energy, alertness, and focus for your workout. This is even more important when you’re fasting before your workout because you won’t have your body’s preferred energy source (carbs) available for training.

Additionally, you’ll feel the effects of pre-workout more quickly in a fasted state because there won’t be food in your stomach to delay its absorption.

Protein, fiber, and fats slow digestion, so if you took a pre-workout supplement after consuming these nutrients, it would take longer to feel the effect of your pre-workout.

This is one reason we also recommend not having a lot of fats before a workout.

The 3 rules for taking pre-workout while fasting are:

To avoid breaking your fast, it’s best to choose a pre-workout that doesn’t contain BCAAs because the amino acids in a BCAA product (leucine, isoleucine, and valine) will trigger an insulin response and halt the fat-burning process that occurs while fasting.

You can identify whether a product has BCAAs or not based on its nutrition label and ingredient list.

You should also choose pre-workouts that are sweetened WITHOUT sugar, maltodextrin, or sucrose, as these sugars and sweeteners have been shown to elicit an insulin response and break a fast.

Instead, look for pre-workouts that are sweetened with natural sweeteners like stevia and monk fruit extract or sugar alcohols like xylitol, maltitol, mannitol, or sorbitol.

Sweeteners like aspartame and sucralose are also popular choices. However, there have been speculations that they spike insulin levels similar to sugar.

Lastly, I recommend starting with a 1/2 serving of pre-workout to ensure you can tolerate it while fasting. If you feel like your digestion is unaffected after taking 1/2 a serving, you can increase to a full scoop while fasting.

Even if you can normally tolerate pre-workout with food, it’s important to start with a smaller serving and work your way up. Taking pre-workout in a fed state can feel very different than when in a fasted state.

Pre-workout ingredients that won’t break a fast are:

Pre-Workout Ingredients To Avoid While Fasting

Pre-workout ingredients that will break a fast are:

My top recommendation for a pre-workout that won’t break your fast is Naked Energy by Naked Nutrition because it has beta-alanine for delaying fatigue, L-arginine for increased blood flow, and 200mg of caffeine for energy.

It also has zero grams of carbs, so it won’t break your fast. Naked Energy is free of soy, gluten, dairy, wheat, and artificial sweeteners or flavors.

If you prefer a pre-workout with a higher caffeine content, I recommend Altius Pre Workout by The Jacked Factory, which has 325mg of caffeine per serving.

Altius pre-workout is sweetened with stevia and contains performance-enhancing ingredients like beta-alanine, citrulline malate, and betaine.

If you don’t want to purchase a supplement but need an energy boost before your workout without ruining your fast, try coffee, green tea, or matcha instead.

These pre-workout alternatives all have caffeine, so you will still get an energy boost, enhanced focus, and alertness without other additives that could ruin your fast.

How Many Calories Will Break a Fast?

Technically, consuming any calories would be considered breaking a fast since a fast is an absence of calories. However, liquids like coffee, tea, and certain pre-workouts have a minimal number of calories and do not produce an insulin response. These are all acceptable to consume while fasting.

Does Caffeine Break a Fast?

Caffeine does not break a fast. It is fine to consume caffeine products like coffee, tea, and pre-workouts while fasting as long as they do not contain additional ingredients such as sugar that would increase the caloric content and spike your blood sugar.

Does Creatine Break a Fast?

Creatine does not break a fast, so you can consume creatine while fasting without compromising your results. However, it’s important to mix your creatine with water, in black coffee, or with a pre-workout without added sugars or BCAAS, as these liquids won’t break your fast either.

Do BCAAs Break a Fast?

BCAAs do break a fast, so they should not be consumed while you’re fasting. BCAAs have been shown to raise your blood sugar when you’re in a fasted state, triggering an insulin response and halting the body’s fat-burning processes.

Will Electrolytes Break a Fast?

Electrolytes will not break a fast. In fact, they’re important when fasting to keep you hydrated. When you’re fasting, it’s easy to become dehydrated, so it’s important to drink plenty of water and consume electrolytes to maintain hydration.

Will These Pre-Workout Brands Ruin Your Fast?

Over the years, I’ve received several questions about whether certain brands of pre-workout will break a fast. So I thought I’d create a list of popular pre-workouts and quickly explain whether they will ruin your fast or not based on the ingredients.

Does Ghost Pre-Workout Break a Fast?

Ghost pre-workout won’t break a fast because it is sweetened with sucralose (a no-calorie sweetener) and does not contain BCAAs. Its performance-enhancing ingredients include caffeine, beta-alanine, citrulline malate, and L-tyrosine, which are acceptable while fasting.

Does C4 Pre-Workout Break A Fast?

Cellucor C4 pre-workout will not break your fast because it doesn’t contain any ingredients that will raise your blood sugar and spike insulin. It has caffeine for energy, electrolytes for hydration, beta-alanine for delayed fatigue, and it’s sweetened with sucralose, which is not known to affect blood sugar.

Alani Nu pre-workout is a great option while fasting because it is sweetened with sucralose and is free of BCAAs, so it will not break your fast. It contains 200mg of caffeine, citrulline malate for enhanced blood flow, beta-alanine to delay fatigue, and L-Theanine and L-Tyrosine for enhanced focus and mood.

Six Star Pre-Workout Explosion won’t break a fast, but the Aminos + Energy powder will because it has 5g of BCAAs per serving. The BCAAs in this pre-workout will increase insulin when you’re in a fasted state, so it’s best to avoid it while fasting.

Does Gorilla Mode Break A Fast?

Gorilla Mode pre-workout will not break a fast because it is sweetened with sucralose and doesn’t contain BCAAs to spike insulin and ruin your fast. It has 175mg of caffeine per scoop for energy, 2.5g of creatine monohydrate per scoop, and other ingredients for focus, mood enhancement, and muscular endurance.

Does Bang Pre-Workout Break A Fast?

Bang pre-workout will break a fast because it contains the BCAAs leucine, isoleucine, and valine which have been shown to raise blood sugar in a fasted state. For this reason, it’s best to avoid Bang pre-workout when fasting.

Does Psychotic Pre-Workout Break A Fast?

Insane Lab’s Psychotic pre-workout won’t break a fast. It’s sweetened with sucralose, which gives it zero calories, carbs, and sugar. However, what I don’t like about this product is that it doesn’t tell you how much of each ingredient is included.

Does Wrecked Pre-Workout Break A Fast?

Huge Supplement’s Wrecked pre-workout won’t break your fast because it is sweetened with sucralose and doesn’t contain BCAAs. Therefore, it is fine to take while fasting.

Can You Mix Collagen Powder With Kombucha? (Pros & Cons)