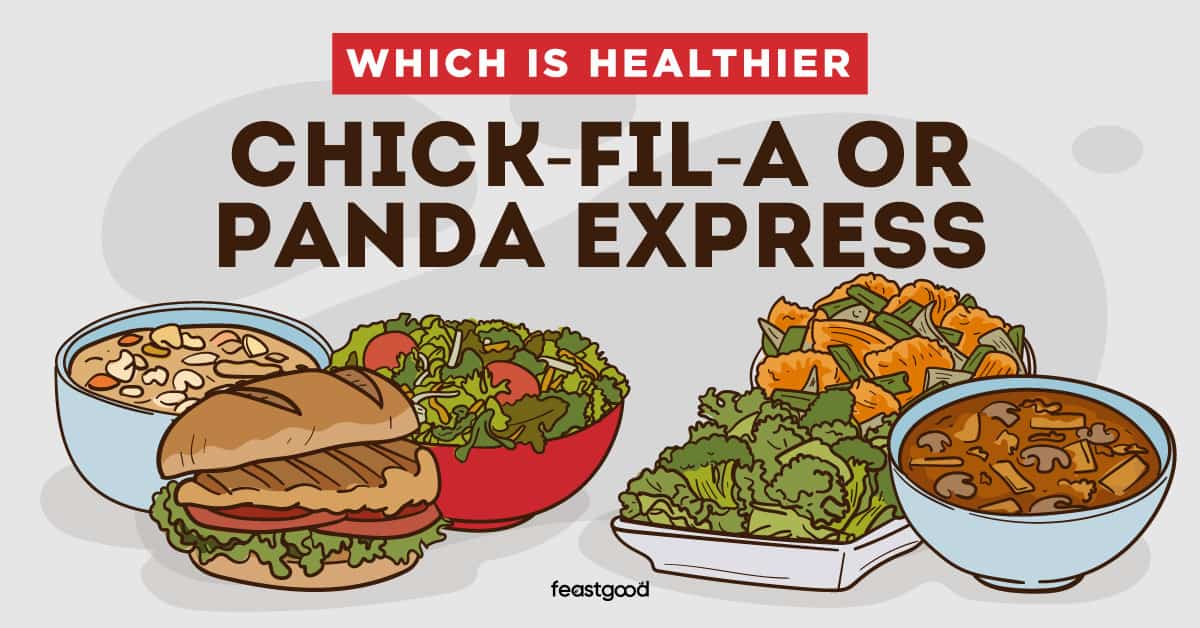 When it comes to choosing between Chick-fil-A and Panda Express you might not be sure which restaurant is better for your health.

Depending on your nutrition goals, you might discover that you can more easily meet your needs at one restaurant verus the other. In this article, I’ll give you the details on the most popular and healthiest menu items at each chain.

Chick-fil-A is an American fast-food restaurant chain that specializes in fried and grilled chicken menu items based on high-quality, antibiotic-free chicken.

The vegetables for their toppings and side dishes are of equally high quality and fresh produce is restocked several times each week from local farmers.

At Chick-fil-A, chicken is the star of the show (the chain does not have any beef or seafood options).

However, Chick-fil-A does have a number of breakfast items (featuring chicken, bacon or pork sausage), as well as salads and side dishes.

The majority of their menu items are higher in calories, fats, and sodium than Panda Express.  I was actually surprised to find out that Panda Express was lower in sodium because of a commonly held belief that Asian dishes are high in sodium.

This is an important consideration for anyone who has been advised to keep their sodium intake low, perhaps due to high blood pressure.

Chick-fil-A also has a very limited selection of options that are suitable for vegetarians or vegans.

That said, Chick-fil-A main menu items are higher in protein than Panda Express, which is usually a positive for helping to meet protein targets.

It’s much harder to find information about where the protein sources and vegetables for Panda Express come from, which leads me to believe that they are more likely to be using conventional products such as animals that are raised using antibiotics.

That said, the menu at Panda Express includes a much wider variety of protein options compared with Chick-fil-A, including chicken, beef, steak, shrimp, and fish.

So far, neither Chick-fil-A or Panda Express has brought on a plant-based meat alternative.

However, Panda Express does have Eggplant Tofu as an entree featuring a plant-based source of protein, whereas Chick-fil-A only has salads and side dishes for plant-based meals, without a protein source.

To determine whether Chick-fil-A or Panda Express is healthier it’s important to compare them across different metrics of nutrition to see which one comes out on top.

Panda Express is the winner for having lower-calorie entrees. Its WokSmart program puts a green symbol next to menu items that are 300 calories or less and provide at least 8g of protein.

The average entree at Chick-fil-A has 4.2g of saturated fat; the single highest item is the Grilled Chicken Club Sandwich with 8g.

The average entree at Panda Express has 3.1g of saturated fat; the single highest items are the Shanghai Angus Steak or Grilled Teriyaki Chicken, each with 4g.  This is only half the saturated fat of Chick-fil-A’s sandwich.

Panda Express is the winner for having more items that are lower in saturated fat than Chick-fil-A.

Panda Express has only one menu item with no sodium (plain steamed white rice), and its highest-sodium menu item is the Ginger Steamed Fish with 1990mg.

Chick-fil-A’s only menu items with no sodium are its fruit cups; its large chicken soup has the highest sodium content with a whopping 1920mg.

The upper limit for sodium intake is 2300mg; however, the recommended sodium intake for those who want to maintain healthy blood pressure is between 1200 to 1500mg per day.  It would be much harder to stay within this range eating at Chick-fil-A compared with Panda Express.

Panda Express is the winner when it comes to having menu items that are lower in sodium than Chick-fil-A, and is a better option for those who want to reduce their sodium consumption.

Chick-fil-A and Panda Express are very similar when it comes to customization because both restaurants give you the opportunity to mix and match side dishes with entrees, and what sauces are used.

Customization allows you to tailor your meal based on your personal preferences and health  and fitness goals.

Both Chick-fil-A and Panda Express offer a moderate amount of customization from the standard recipe for their main menu items. You don’t get as much control over what goes over your meal as you would at home, or even a chain like Subway, but there are definitely options to tailor your meal to your needs.

Chick-fil-A makes its salads on-site daily to ensure freshness.  The vegetables for the salads and for toppings come from deliveries of fresh produce that arrive at the store multiple times a week.

The nutrients in fresh produce are at their peak when it is first picked.  Getting fresh produce means that your food will have more vitamins and minerals than if the produce is older and/or has undergone more processing such as cooking it into dishes or sauces.

Panda Express doesn’t provide information about how often its produce is restocked.

Chick-fil-A is the winner for the best quality produce. Their produce is restocked frequently from local farms. The result is great taste and more micronutrients.

When deciding whether a restaurant is healthy, it’s also important to consider the quality of the meat in its meals.  One important aspect is whether the animals are raised with the use of antibiotics.  Eating meat that contains antibiotics can make germs more resistant to drugs, which makes medications less effective.

Chick-fil-A’s chicken is whole breast meat raised with no antibiotics,no fillers, and no added hormones.  The chicken is then breaded by hand in the restaurant for Chick-fil-A’s Original Chicken menu items.

Panda Express doesn’t provide information about the source of its chicken, beef, shrimp, or fish.

Chick-fil-A is the winner for the best quality meat. They share publicly about the source and quality of their chicken.

Chick-fil-A does not currently have any plant-based entrees.

Panda Express has its Eggplant Tofu as a plant-based entree.

There are also several seafood dishes (some vegetarians also include fish in their diet).  Beyond that, Panda Express has a Super Greens entree, and many of its side dishes are suitable for vegetarians/vegans: chow mein, chow fun, rice, and a vegetable spring roll.

Panda Express is the winner for vegan/vegetarian options. It actually has a plant-based entree, whereas Chick-fil-A does not have any entrees for vegans or vegetarians at all.

Menu Items: Side by Side Comparison

Chick-fil-A and Panda Express do not offer the same types of meals, so a direct head-to-head comparison is not possible.

However, I will show some common meals that have similar ingredients.

The String Bean Chicken Breast dish from Panda Express is lower in calories, carbs and sodium than the Grilled Chicken Sandwich from Chick-fil-A.  The dish also contains string beans, so it includes a serving of vegetables compared to just a topping on a burger.

However, the protein content of the Chick-fil-A sandwich is double, and the sandwich is lower in fat.

Overall, the String Bean Chicken from Panda Express is a healthier option for most people. The Chick-fil-A sandwich would be a better choice for someone looking to maximize protein intake for muscle gain and also keep fat low.

An option to reduce the calorie and carb content for the Chick-fil-A sandwich is to order it without the bun.

Chick-fil-A Side Salad vs. Panda Express Super Greens Side

The Panda Express Super Greens side dish is lower in calories, carbs and fat, and higher in protein, than the Chick-fil-A side salad.

However, the Chick-fil-A side salad has less than half the sodium content of the Panda Express Super Greens side.

The healthier option for most individuals is the Panda Express Super Greens side dish because it’s lower in calories, carbs, and fat, and higher in protein than the Chick-fil-A side salad. However, if sodium content is the most important metric, then the Chick-fil-A salad is the better choice.

The Chick-fil-A chicken soup is higher in calories, carbs and sodium than the hot & sour soup from Panda Express.  It does, however, offer nearly double the amount of protein, and the fat content is the same.

The hot & sour soup from Panda Express is a healthier option for most people because it’s lower in overall calories and carbs, and sodium. That said, if maximizing protein intake is your goal, then the chicken soup is a better choice.

Really, you can make healthy choices at any fast food restaurant.

The key is to focus on what and how much you eat, regardless of where.

Below, I’ll be giving my top recommendations for the healthiest meals at either Chick-fil-A or Panda Express.

My top 3 healthy meal recommendations from Chick-fil-A are:

A healthy breakfast option from Chick-fil-A is the Egg White Grill.  This option is high in protein to help keep you feeling full, but lower in fat and calories than options with whole eggs.  The addition of a fruit cup makes an overall balanced meal.

The sodium content of this meal can be reduced by 230mg by removing the cheese from the Egg White Grill.

Another healthy meal option from Chick-fil-A is the Grilled Market Salad with Toppings.  This meal is high in protein from the chicken and is also a great source of micronutrients and fiber from the vegetables in the salad.

Ordering this salad with the dressing on the side will allow you to reduce the amount of calories, fat, and sodium.

The third healthy meal option that I would suggest you order from Chick-fil-A is the Grilled Chicken Sandwich with a side salad to create an overall balanced meal.

The grilled chicken is an excellent lean source of protein.  The carbs in this meal come from the bun and the vegetables in the salad.  The fat source is mainly the salad dressing.  The vegetables provide fiber and micronutrients.

My top 3 healthy meal recommendations from Panda Express are:

My first meal recommendation from Panda Express is the String Bean Chicken Breast entree with a side of the kids’ size steamed rice and a side of super greens to create a high-protein meal with lots of vitamins & minerals.

Panda Express has an extensive kids’ menu, with all of the main menu items appearing in a smaller serving size, which is also perfect for adults who are looking to manage their overall calorie intake.  If it is not possible to order from the kids’ menu, then the other option is to simply eat half of the regular steamed rice order and save the rest for another time.

My next meal recommendation from Panda Express is the Shanghai Angus Steak and Super Greens for a lower-carb meal option that is high in protein.

The Super Greens is a great option to add to any meal from Panda Express to add micronutrients and fiber for minimal added calories (only 45 calories in the side dish size).

My final meal recommendation from Panda Express is Broccoli Beef, again paired with the kids’ size of white steamed rice for lower overall calories and carbs.

Can You Cook With Protein Powder? (Yes, Here’s How)

Does Creatine Help You Lose Weight? (What Science Says)