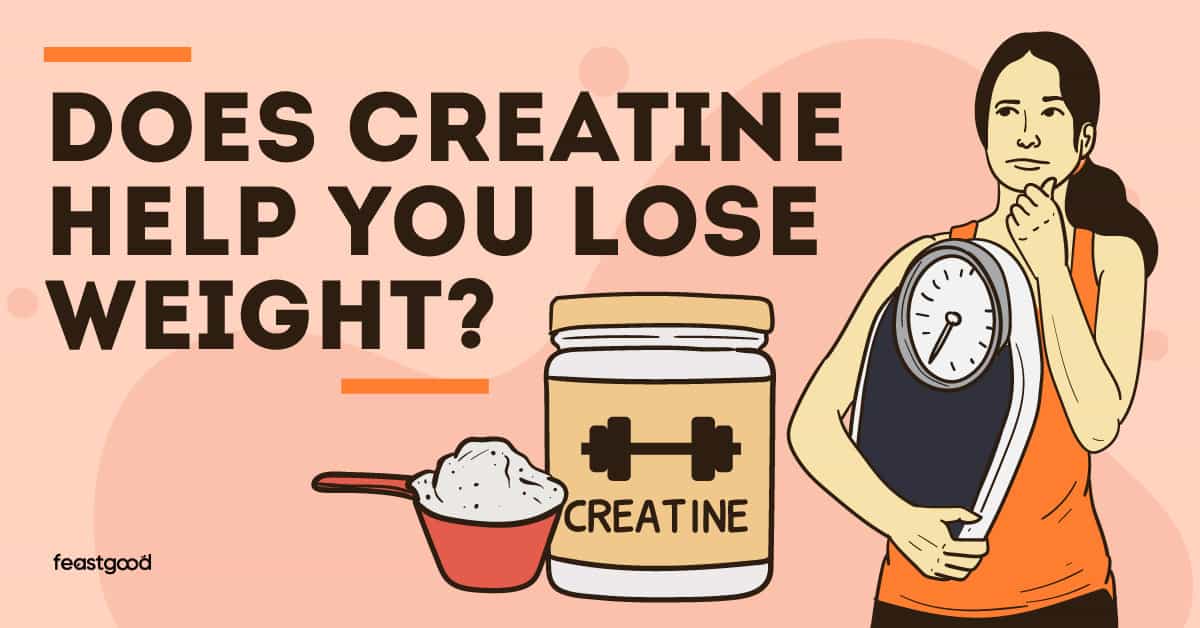 Creatine is one of the best supplements for those who want to bulk and put on muscle mass, but some of my clients have been wondering whether creatine can help or hinder weight loss goals, too.

Does creatine help you lose weight? Creatine can help you lose weight because it can encourage muscle gain.  This is important because the more muscle you have, the more calories you burn per day. The increased energy expenditure from muscle mass can help create a calorie deficit, which is necessary for weight loss to occur.

Before you start supplementing with creatine, it’s important to know why it can help you lose weight and the potential side effects you could experience.

What To Know About Creatine & Weight Loss

Creatine can help you to lose weight by allowing you to work out at higher intensities for longer, but taking creatine doesn’t necessarily mean that you will lose weight.

Taking creatine will only result in weight loss if you also achieve a calorie deficit (taking in fewer calories than your body needs to maintain weight). This can be done by decreasing your food intake and increasing your activity.

So how does creatine help you achieve a calorie deficit?

Creatine helps you achieve a caloric deficit by serving as an energy source to fuel your activity. Creatine supplementation increases the amount of creatine that is stored in your muscles, which helps delay the time to fatigue when you’re working out.

If you’re able to get extra reps in the gym by supplementing with creatine, then you’re increasing your potential for muscle gain. Muscle gain can help weight loss because muscle burns more calories, so the more you have, the easier it is to lose weight.

The Science Behind Creatine And Losing Weight

Before drawing conclusions about whether creatine should be used while pursuing weight loss, it’s important to evaluate the current research to see what the science says about creatine and weight loss.

This meta-analysis of 19 studies evaluated the research on the effects of creatine supplementation in combination with resistance training on fat mass in those over 50 years of age.

Takeaway: Creatine supplementation helps reduce body fat percentages, likely because of its ability to increase your fat-free mass (muscle), which helps improve your body composition and increase the number of calories you burn per day.

This study aimed to evaluate the effects of creatine supplementation on anaerobic performance (high-intensity exercise) while calories were restricted for weight loss.

To evaluate this, 16 male participants performed sprint intervals while eating 18 calories per kilogram of their body weight and performed the same sprint protocol for 5 days.

The study found that those who were supplemented with creatine actually improved their sprint performance and had stored more creatine in their muscles despite being in a caloric deficit.

However, there were no significant differences between the bodyweight changes or body composition changes between the creatine and placebo groups after 5 days.

That being said, 5 days probably isn’t long enough to observe any differences in body mass and composition between the two groups because they were both in caloric deficits.

This leads me to believe that over time there is potential for the creatine group to gain more muscle than the placebo group, resulting in more weight loss if calories were continued to be controlled.

More Studies Need To Be Done

It would be valuable to have a study that compares body composition across two groups, both in a controlled calorie deficit with creatine supplementation versus a placebo group.

3 Benefits of Taking Creatine When Trying to Lose Weight

The benefits of taking creatine for weight loss are:

Supplementing with creatine while dieting is beneficial because it encourages muscle retention and growth by helping you push harder in the gym.

When your body’s creatine stores are depleted, you’re no longer able to exert as much force, but when you have more creatine stored in your muscles to work with, you can exert force for longer periods before running out and becoming fatigued.

For example: let’s say you could only do four reps of squats at 200lbs before running out of steam. With creatine supplementation, you might be able to do six reps at 200lbs.

While two extra reps might not sound significant, it actually is when you consider that you can do two extra reps for each set of all your strength movements. This additional volume can help you to build muscle by providing your muscles with enough stimulus to adapt.

Another benefit of creatine supplementation while dieting is that it can help improve your cognitive function, which is especially important while dieting because it’s common to experience “brain fog” when calories are reduced.

Studies have shown that creatine can improve memory and processing speeds, which can help you keep up with your day-to-day life rather than feeling like you’re unable to keep up with everyday tasks.

Keeping up with my daily activities to the point where my diet isn’t affecting other aspects of my life is important for me to stick to my diet. If I feel that I’m too lethargic to live my life as normal, then I’m more likely to give up on my diet before seeing meaningful results.

If supplementing with creatine can improve my cognitive function and help me adhere to my diet more consistently, then the better my weight loss results will be.

Lastly, creatine supplementation can help enhance your athletic ability while dieting by increasing the amount of time that you can sustain higher-intensity activities.

When your calories are reduced for weight loss, it’s common to feel fatigued and lethargic because you’re consuming fewer carbs, which are your body’s preferred fuel source.

This lack of carbs negatively impacts your athletic performance, especially for powerful movements like sprinting, jumping, and weightlifting.

However, when you supplement with creatine, you’re providing your body with more fuel for these explosive movements because the energy system responsible for high-intensity movement is the phosphocreatine system.

The phosphocreatine energy system only runs out of steam once creatine is depleted, making it harder for you to sustain the high-intensity effort.

Increasing your creatine storage through supplementation can improve your athletic performance by helping you sustain higher-intensity efforts for longer periods so you can accomplish more work.

Are There Any Side Effects to Taking Creatine When Trying to Lose Weight?

The side effect you might experience taking creatine while dieting is water retention. Water retention occurs because creatine draws more water into your muscle’s cells, causing them to look fuller.

The water retention from creatine will be more noticeable when you first start supplementing, but as your body adjusts, you won’t store as much water.

The best thing you can do to control water retention with creatine is to stay hydrated because bloating worsens when you’re not consuming enough water. This is because your body tries to hold onto what water is available by retaining more water rather than excreting it as normal.

However, creatine water retention shouldn’t be viewed as a bad thing because it can make you look more muscular and enhance your physique by increasing the definition in your muscles.

Will You Lose Weight If You Stop Taking Creatine?

You may lose weight when you stop taking creatine, but it’s not necessarily good weight loss because the weight you’ll lose will likely come from water or even muscle.

The weight you lose when you stop taking creatine will not be fat, which is typically what people want to lose when they’re dieting.

Losing water would be normal, and the only change besides the scale would be a deflated physique rather than more round muscles.

You could also lose muscle mass when you stop taking creatine because once the effects of creatine wear off, you won’t be able to sustain the same intensity in training. If you lose muscle, you will also burn fewer calories per day.

Which Type of Creatine is Best to Take When Trying to Lose Weight?

My favorite brand of creatine monohydrate is TruCreatine from PEScience because it is third-party tested for ingredient purity and label accuracy, it mixes well, and I appreciate the company’s mission of “innovation, transparency, and quality.”

I highly recommend using a creatine powder that is third-party tested because it means that another company has evaluated this product and confirmed that it contains the exact ingredients and concentrations of these ingredients that are advertised.

This prevents companies from using cheap fillers that don’t improve your performance to save costs when making their product without advertising it.

How To Take Creatine Properly When You Want To Lose Weight

Is It Safe to Take Creatine When Trying to Lose Weight?

It is safe to consume creatine when trying to lose weight. Creatine is one of the most well-researched supplements on the market, and it has been proven to be safe and effective in 5-gram doses per day.

Does Creatine Speed Up Weight Loss?

Supplementing with creatine can speed up weight loss if it’s combined with a calorie deficit because it can help increase your muscle mass and energy expenditure, which means that you’ll burn more calories.l than you would without creatine.

Should I Take Creatine While Trying to Lose Belly Fat?

Yes, because although you can’t choose where you lose fat, if you’re burning calories more readily due to an increase in muscle mass, you will lose total body fat more quickly, which will eventually come from your belly.

Which Is Healthier Chick-fil-A or Panda Express? (Our #1 Pick)

Drinking Whey Protein Every Day (Are There Drawbacks?)