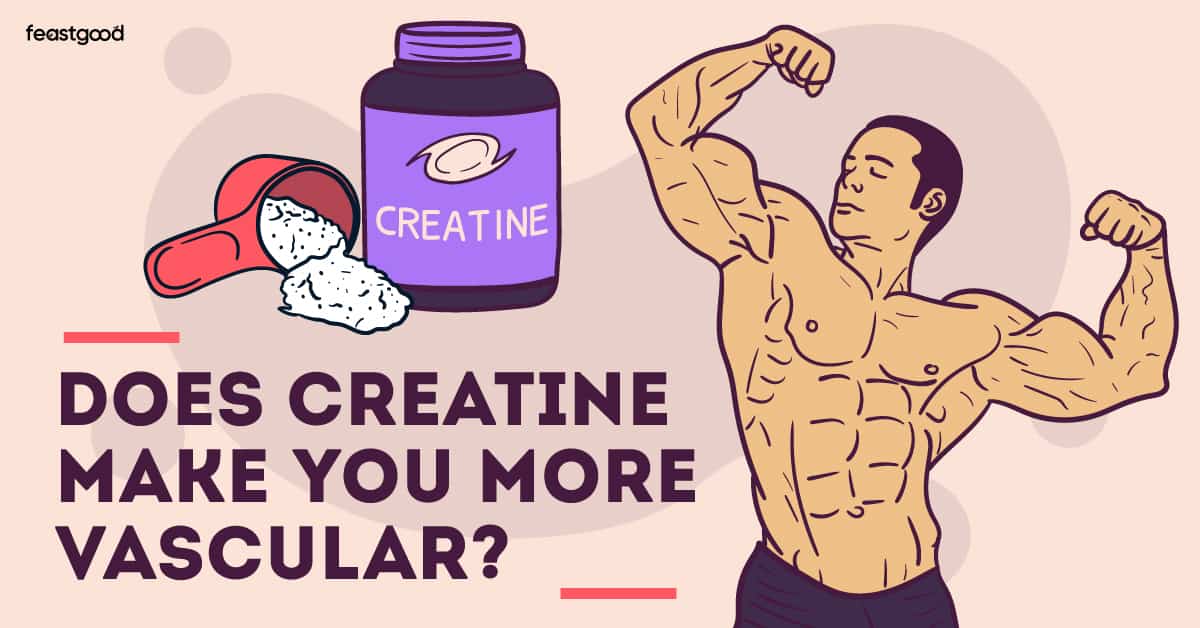 Creatine helps in the development of muscle size and strength, leading to thoughts that it may also make you more vascular.

Does creatine make you more vascular? Creatine does not directly make you more vascular because its purpose is to provide energy to muscles. However, creatine increases muscle mass, assists in fat loss, and acts as a mild vasodilator.  Combined, this will indirectly promote more fluid and oxygen to your muscles, which may influence how vascular you look.

Creatine is a helpful supplement in many respects, but here I’ll specifically discuss how it supports you in the context of achieving greater vascularity.

Want to know all the known side effects of creatine? Check out our guide on Are There Risks of Taking Creatine?

What Does “Being Vascular” Mean?

“Being Vascular” is a popular aesthetic desired by strength and bodybuilding enthusiasts wanting to “get lean” and build their muscular physiques.

Vascularity is where there are visibly prominent veins protruding from muscles across the body. Genetics can play a large role in how vascular someone is but the main levers available to us to be more vascular are:

Supplementing with creatine may influence your ability to move the dial on those variables so you can be more vascular.

The 4 main ways creatine could make you more vascular are:

A comprehensive review of 22 studies into the effects of creatine use overwhelmingly concluded that when combined with resistance training, creatine supplementation results in greater increases in lean muscle mass compared with those not supplementing with creatine.

When trying to look vascular, muscle size is important. Veins sit around and on top of muscles so as your muscles get bigger they push veins against your skin, making them more visible and “vascular”.

With an increase in muscle mass and then a decrease in fat, vascularity increases dramatically.

A study showed participants, after 4 weeks of training and creatine use, had significantly improved body fat percentages compared to where they were before participating in the study.

The most common bodily fat we have is found under the skin. As body fat decreases, the layer of fat that exists between muscles and skin reduces. This makes your muscles and your veins surrounding them more visible, again leading to a more vascular appearance.

Importantly, as discussed above creatine also contributes to increases in muscle mass. Muscles require more energy in order to be maintained, particularly at rest. So the more muscle you have, the more energy your body is using to maintain it.

Energy balance is king when attempting to lose fat (calories in vs calories out) because we must burn more energy (calories) than we consume, so increasing muscle mass becomes critical to the process.

Creatine, in this regard, has dual benefits because effective supplementation provides an increase in muscle and decrease in fat ‒ two necessary elements to becoming more vascular.

Creatine supplementation has been shown to result in an increase in performance output and capacity when training. In particular, a study using high intensity cycling as a test subject, showed results of a 3.7% increase in cycling power for those athletes using creatine.

Performance output is important because it allows you to recover quicker and work harder for longer during training sessions. Resulting in more energy expended, coupled with a calorie deficit this could contribute to fat loss. With less fat covering muscle tissue, you’re likely to look more vascular.

This connects to my next point.

Creatine is a mild vasodilator, which means it can cause veins to open up and expand, allowing blood, fluid, and other nutrients to reach the muscle quicker making it swell.

This intensifies when we are training hard (think high volume, high rep) and experiencing an elevated heart rate because there is an increase of blow flow through the body. This is commonly where we’ll feel a “pump”, with veins pushing to the surface of the skin and appearing bigger and more visible.

Providing we’ve adequately hydrated and had some carbohydrates pre workout, this is another reason creatine use may contribute to increased vascularity.

Looking at the body of work undertaken to understand the impact of creatine on blood flow, the general consensus is there have been no negative impacts on vascular health and no indication that it decreases blood flow. Interestingly though, while still in its early stages, research around the benefits of creatine use on vascular health, appears promising.

Should You Take Creatine To Get More Vascular

If your sole purpose is to look more vascular there are other supplements available that may be more suited to this as an isolated goal.

To get more vascular veins you need to have incredibly prominent and visible veins, some specific supplements on the market to help with this, include:

When labeled as a supplement, it includes L-citrulline and L-arginine and is said to help your body create more nitric oxide, which is a gas the body creates in your blood to increase efficient blood flow to muscles. This could lead to muscles looking large because they are full of blood, leaving veins looking more pronounced.

The best nitric oxide supplement I have tested is the Horbaach Nitric Oxide Booster.

Supplements like this are taken by some of the best bodybuilders around and will provide you with the pump you’re after. I’d suggest this supplement is for those more advanced in their training and looking for a differentiating factor. So if you are wanting to get the edge with your vascularity, this could be the supplement to get you there.

L-Citrulline, on its own, helps support the body to create nitric oxide and improve blood and oxygen flow to muscle by relaxing veins so this occurs more optimally.

The best quality L-Citrulline supplement I’ve found is by NOW Supplements, they are reputable and their products are well priced.

Opting for an L-Citrulline supplement instead of a Nitric Oxide supplement is a good way to introduce a vascularity supplement to see how your body responds. You’ll be able to build on this supplementation as you progress and your needs change.

Again this is a supplement to support the production of nitric oxide in the body, leading to widening of the veins through increased blood flow. Users have also experienced better circulation to minimise high blood pressure and narrowing of veins.

I am a huge fan of the NOW Supplements L-Arginine too.

L-Arginine is a particularly sound starting point when finding the best supplement to suit your vascularity needs. As well as widening the veins, it is said to promote circulatory health, so with more than one benefit to be gained you’re on to a winner.

Beetroot or Beets contain a natural compound known as nitrates. So this can perform like a natural vasodilator, causing veins to enlarge and relax pushing blood and oxygen around the body more effectively.

Nature Fuel Power Beets is my favourite beets supplements to give a natural energy boost while promoting blood flow to provide that vascularity look.

This has great flavor and mixes well with some water pre-workout.

With all that said, creatine is still a worthwhile supplement to use because:

4 Benefits of Being Vascular

The notable benefits of a being vascular might include:

With veins swollen and prominent you have likely reduced your body fat percentage in the single digits for men and around the 15% mark for women, so you will look incredibly lean with visible muscle definition.

Muscles will be prominent and well-formed and with little to no fat tissue likely covering them, will look rock-solid.

With prominent vascularity across the body and veins covering muscle pressing out of the skin, it is going to make for an imposing physique and stand out from your average gym-goer or strength enthusiast.

Vascularity is arguably the aesthetic pinnacle in the bodybuilding community. It takes discipline, persistence and patience to build a muscular physique with prominent vascularity, so if you get there, brag about it.

How Long Does It Take For Creatine To Increase Vascularity?

When supplementing with creatine it can take anywhere from 1 week to 4 weeks to experience the benefits depending on how it is dosed. SImilarly, to feel the combined benefits of creatine in assisting with vascularity, users can expect that same time frame to apply.

How To Take Creatine To Increase Vascularity?

To enhance vascularity through creatine use, the best approach is to load your creatine in the first week to saturate your muscles with creatine so you can start to experience the benefits of creatine use and the associated carryover to appearing more vascular.

Which Creatine Supplement Is Best For Increasing Vascularity?

A creatine supplement that also includes other compounds that promote vascularity are likely to work well. These are usually of a pre-work variety. Look for an ingredient panel that includes arginine and citrulline as well as creatine.

Creatine has proven performance and strength benefits and an excellent safety profile for use over sustained periods. While it may not be specifically targeted at creating vascularity like other supplements, it has many carry-over benefits that may assist you in your efforts to look more vascular.

Can You Mix Whey Protein With Soy Milk? (Follow These Tips)