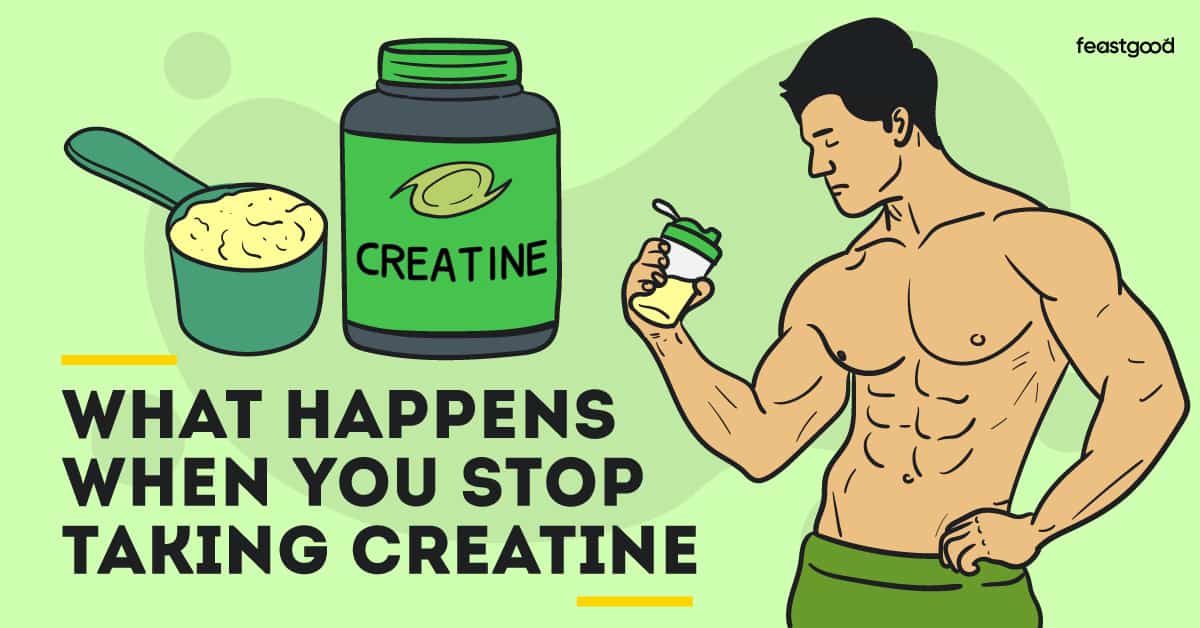 While creatine is one of the most common and well-studied supplements, with currently no known clinically relevant side effects, it is still important to be aware of what could happen when you stop taking creatine.

With that said, these changes in performance can vary depending on level of activity and how much creatine was stored before stopping it.  There are also a few more changes that might occur when stopping creatine, which we’ll discuss below.

Side Effects When Stopping Creatine

The 6 side effects that could happen when you stop taking creatine are:

95% of creatine is stored in your muscle and creatine draws water into the muscles.

So, when supplementing with creatine there will be more creatine stored in your muscles and likely more water retained. This can make muscles look bigger and fuller.

It makes sense then, that when creatine is stopped and creatine stores decrease there can be a drop in water weight as there is less creatine in the muscles retaining fluid.

If you see or feel your muscles looking smaller after ceasing creatine, don’t be alarmed as this is likely attributed to less water volume and therefore less muscle fullness.

Creatine is stored in your muscles as phosphocreatine, this is a stored form of energy and aids in the production of adenosine triphosphate (ATP).

Let’s break down what that means…

ATP is essentially energy currency in the body allowing better performance in exercise. Through creatine supplementation phosphocreatine increases and so do ATP resources, leading to performance energy increasing too.

Similarly, expect your short duration, high intensity workouts to benefit while using creatine, with studies showing available ATP will reduce fatigue, allowing you to produce a higher output than if you weren’t using creatine.

When we stop taking creatine and our creatine stores decrease, and consequently ATP reduces, there will be less energy resources available in muscle tissue. The result is that it could lead to less energy when exercising.

This energy decrease can also be connected to other changes felt in creatine cessation, which leads us to our next point.

Having less energy in workouts because of stopping creatine may also lead to feeling as though there has been a decrease in strength.

With a lowered amount of ATP or energy resources in the muscles causing reduced stamina and intensity, the rate of your gains may slow down, and your muscles may feel weaker during a workout because you may also tire quicker.

Stopping creatine will result in a shift in your performance capacity. This shift may prevent you from pushing as hard as you were when using creatine because the additional creatine stores are no longer present. You no longer have additional energy currency present and available to expend in your workouts.

This reduction in performance capacity could mean your expression of strength and performance output while training is diminished.

Having less available ATP or energy resources in our muscles may also make us feel like we tire quicker.

With creatine supplementation producing more ATP in our muscles, in performance terms our output window to express strength or perform an activity will increase.

In stopping creating and having less ATP, our performance window shortens because we are likely to tire quicker as we don’t have as much ATP available in our muscles.

Our bodies are adaptable though, so continuing to exercise without creatine, will still result in capacity and endurance improvement over time despite an initial feeling of increased fatigue once creatine usage has been stopped.

Supplementing with creatine can suppress our natural production of creatine, because the body may think it is overproducing creatine and so its own production process will slow down.

Stopping creatine won’t immediately trigger the body to return to its usual rate of creatine production. Creatine levels in the body will decrease when supplementation stops and as this starts to level out, the body’s natural process will kick in and its natural rate of production will occur.

While a decrease in natural creatine production has been observed when supplementing with creatine, there is no evidence of permanent damage being caused by creatine supplementation used within recommended dosages, 3-5g daily, over sustained periods of time.

Small creatine withdrawal effects could be felt when ceasing supplementation.

Like creatine stores depleting from our muscles, when we stop taking creatine, stores in our brain can also reduce and it can take some time for the body to recognise this and start its natural development again. This lag can cause general fatigue that is felt across all activities and not just exercise.

As the body starts producing its own creatine again, everything will normalise, and any feelings of fatigue will soon dissipate.

There seems to be concern in the community that stopping creatine will result in a loss of muscle mass.

Sometimes when stopping creatine, a loss of muscle fullness may occur. This is because of fluid in the muscles reducing when creatine supplementation has stopped. Visually this could be confused with losing muscle mass.

Any muscle development achieved while supplementing with creatine will continue providing you still train and lift following creatine cessation. Any visual differences that may occur following creatine being stopped should, by no means, be chalked up to a loss of muscle mass or muscle tissue.

Creatine supports the body’s process in adding lean mass and increasing strength by up to 8%. These gains will not reverse simply because creatine has been stopped.

Main Takeaway: Does stopping creatine result in the loss of muscle mass? That doesn’t appear to be the case, it seems the concern around this occurring is more fiction than fact.

Should You Stop Taking Creatine?

If you’re using good quality creatine within the recommended dosage ranges, studies have shown that there are no issues with long term creatine use and so there is no need to stop taking creatine if you don’t want to, you have no medical issues and you aren’t experiencing any side effects.

A study was undertaken to pin down whether there were any concerns with long term use of creatine supplementation with the ultimate finding indicating there were no apparent adverse health markers in participants.

It has been recommended that people with chronic renal disease or using potentially nephrotoxic medications avoid supplementing with creatine. If you are concerned about this, talk to a dietician who would be best placed to assist in navigating this space.

The answer to stopping creatine use is going to come down to personal preference.

If you are wanting to take a break from creatine supplementation though some guidance on this is to cycle through a 1 week loading phase to build creatine saturation in the muscle, 3 weeks maintenance and then 1-2 weeks off, before recommencing again.

The time off creatine is such that the accumulated creatine would completely diminish and there is less chance of a decrease in performance before the next cycle has started.

Importantly though, studies have indicated creatine cycling is not necessary in the scheme of things because:

Will You Lose Your Gains If You Stop Taking Creatine?

No. The muscle you built and the performance outcomes you achieved are still present after you stop creatine. Stopping creatine does not reverse your gains.

While you may experience a downturn in training capacity, energy, and endurance when you cease creatine supplementation:

Rest assured, if you avoid a hard nutritional deficit and a significant training hiatus your gains will remain.

Should You Adjust Your Training When You’re Not Taking Creatine?

Studies have found creatine supplementation enhances strength, muscle mass and performance when used as part of a training regime.

It is less a matter of adjusting your training when not taking creatine and more a matter of:

These two things combined will ensure you keep making progress over time, regardless of whether or not you are using a creatine supplement.

How Long Does Creatine Withdrawal Last?

Stopping creatine supplements will deplete creatine stores in the body, particularly in muscle and the brain. This withdrawal can cause lethargy and fatigue lasting for 1 or 2 weeks. Feelings can be so slight you may not recognise it’s occurring, before your body’s natural processes start up to usual levels again.

How Much Weight Will You Lose If You Stop Creatine?

When you stop taking creatine your muscles are unlikely to hold as much water as they were when you were supplementing with creatine. This can result in losing 2-3 kilograms of water weight in the first week after you have stopped creatine supplementation.

What Happens If You Stop Taking Creatine But Still Workout?

When creatine supplementation is stopped ATP energy resources in the muscles reduce and so your rate of gains or performance improvements may be slower than it was while taking creatine. You might also feel as though you can’t push as hard or for as long.

While it is good to be aware of what could occur if I were to stop taking creatine, for me personally, it doesn’t seem like there is an inherent need to stop, so I won’t be taking it out of rotation any time soon.

Creatine is safe and its supplementation has consistently shown to have a beneficial effect on strength gains, muscle development and performance. Better than that, it is one of the cheapest and best bang for buck supplements out there.

If I happen to forget to reorder my creatine and I happen to run, at least, any side effects seem tolerable and negligible.

Can You Mix Whey Protein With Apple Juice?

Is Popcorn Good or Bad For Bodybuilding? (Pros & Cons)