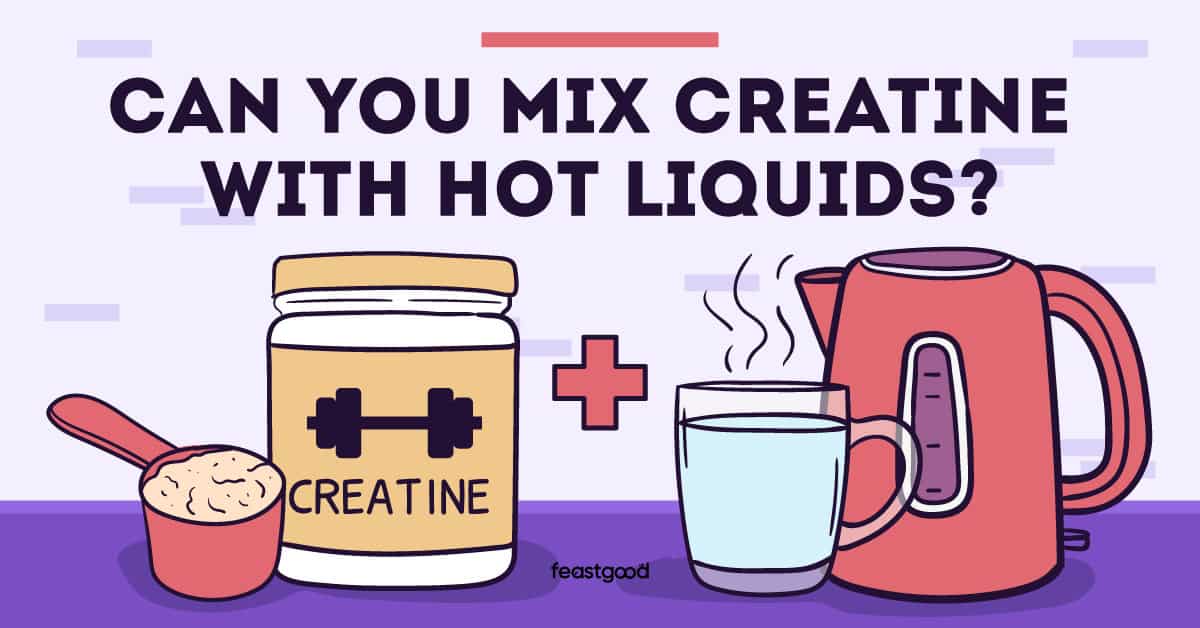 Creatine has many performance-enhancing benefits, but people are concerned about whether mixing it with hot liquids will destroy the creatine.

The main benefit of mixing creatine with hot liquids is that it dissolves better in hot liquids than in cold liquids, making it more palatable to consume.

I prefer to mix my creatine with hot liquids so I don’t have to worry about it clumping or becoming gritty, which makes it unpleasant to consume.

If your creatine gets clumpy when you mix it in liquids, try these tips for making creatine easier to dissolve.

Another important benefit to mixing creatine with hot liquids is that it retains its effectiveness and is not affected by the heat.

If you prefer hot liquids, you can take your creatine without worrying about ruining its absorption and limiting the strength, power, and cognitive benefits associated with creatine supplementation.

There are no real drawbacks to mixing creatine with hot liquids other than limiting your options.

You can mix it with coffee (or other coffee-based beverages), tea, hot chocolate, warm milk, or even soup, but that’s likely it. Whereas with cold liquids, the possibilities are endless.

Creatine & Hot Liquids: When To Consume It

Is Creatine Mixed With Hot Liquids Good for Pre-Workout?

Creatine mixed with hot liquids before a workout is a great option for those who don’t mind a hot beverage before training, especially if that hot liquid is coffee.

Mixing creatine with coffee is an excellent option pre-workout because the caffeine in coffee can help to increase alertness and result in a better training session, which ultimately produces better muscle-building or strength outcomes.

Caffeine and creatine are the perfect pre-workout duo to enhance your performance in training, but I would still recommend consuming carbs as well to ensure you’re fueling your workout.

Some great pre-workout carb options are those that are low in fat and digest quickly like fruit, cereal, or oatmeal.

Is Creatine Mixed With Hot Liquids Good for Post-Workout?

Creatine mixed with hot liquids after a workout is a good option as long as you also consume enough carbs and protein to promote recovery after training. Although everyone’s needs will be different, I recommend consuming at least 20 grams of protein and 20 grams of carbs after your workout.

I recommend mixing your creatine with protein hot chocolate. The sugar in hot chocolate would serve as a fast-digesting carb source to replenish your energy, and the protein would help to encourage muscle repair and growth.

My favorite protein hot chocolate recipe is this one:

Combine the ingredients in a saucepan and heat until the desired temperature is reached.

Related Article: Can You Mix Creatine With Protein Powder?

Is Creatine Mixed With Hot Liquids Good Before Bed?

Creatine mixed with hot liquids is a great option before bed as long as the hot liquid doesn’t contain caffeine or sugar, which would affect your quality of sleep.

I would recommend mixing your creatine with an herbal tea before bed because it would promote better sleep quality. My favorite herbal teas are chamomile, peppermint, and ginger teas.

Having trouble sleeping after taking creatine? Check out Can You Take Creatine Before Bed? And, Does It Affect Sleep?

Who Should Mix Creatine With Hot Liquids?

Who Should Not Mix Creatine With Hot Liquids?

The only people who should not mix their creatine with hot liquids are those who simply don’t enjoy hot liquids.

Although creatine does dissolve better in hot liquids than cold liquids, if you don’t enjoy drinking hot liquids, it’s not worth it.

Ultimately, it’s most important to mix your creatine with something you enjoy so that you actually want to take it. Creatine is most effective when taken regularly, so it’s best to mix it with whatever liquid you find the most enjoyable.

Will Creatine Dissolve In Hot Liquids?

Creatine will dissolve in hot liquids. In fact, it dissolves better in hot liquids than cold liquids, which makes it undetectable and more easily consumed.

You can mix creatine into any of your favorite hot liquids without compromising its effectiveness, and because it dissolves so well, you won’t even know it’s there.

Best Types of Creatine to Mix With Hot Liquids

The best brands of creatine monohydrate are:

The best brand of creatine is PEScience TruCreatine because it’s made with creatine monohydrate, which is the purest and most effective form of creatine on the market according to the current research. Additionally, it’s third-party tested, and it dissolves well in all liquids.

I appreciate supplements that are third-party tested, like TruCreatine, because I want to know that the products I’m consuming are exactly what they’re advertised to be.

Additionally, this company does a great job of educating its customers on the scientific research supporting its supplements.

The second brand that I recommend is Nutricost Creatine Monohydrate because it also contains creatine monohydrate, and it’s third-party tested.

The only reason Nutricost creatine is in second place is that I value what PEScience is trying to do by making the research more accessible and being upfront about why they’ve developed their products.

No, the properties of creatine aren’t affected by hot water, so it’s perfectly fine to mix your creatine with hot liquids without it being destroyed or compromised in any way.

What Else Can You Mix With Creatine?

200 Calorie Deficit: Is It Healthy & How Much Can You Lose?