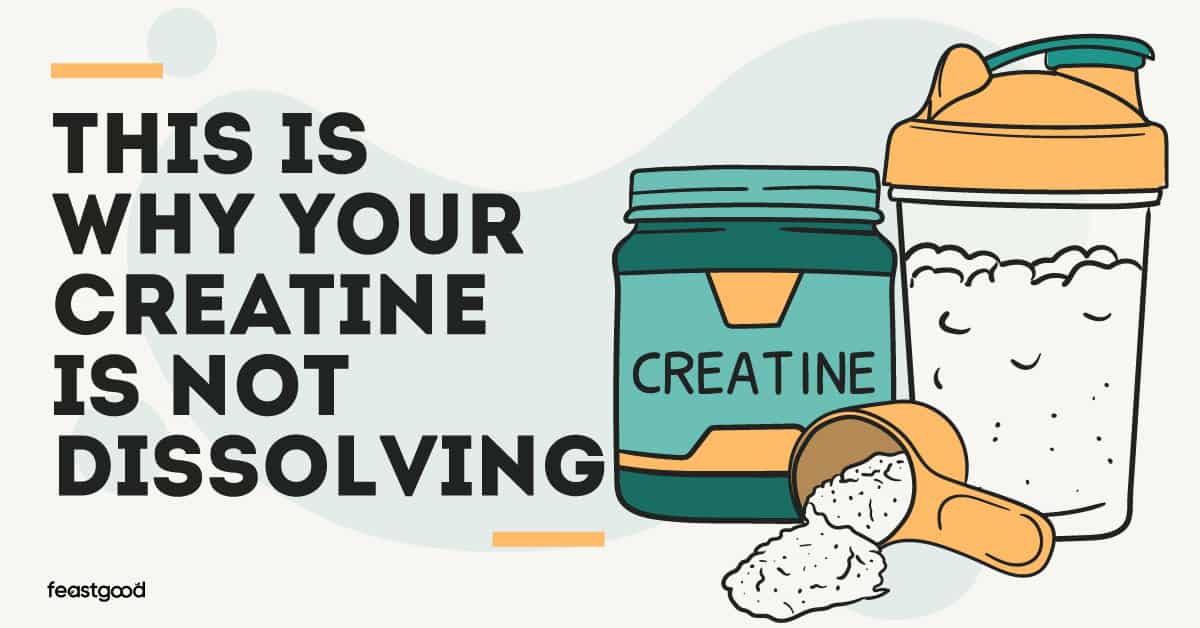 It can be concerning when you go to drink your creatine and notice that the liquid is cloudy because it hasn’t dissolved properly.

So, why is your creatine not dissolving? Creatine dissolves poorly in water or other liquids, particularly if the liquid is cold. The type of creatine will affect how well it dissolves, but all forms of creatine can be made to dissolve more effectively by stirring them into a warm liquid and consuming them immediately after stirring.

When your creatine doesn’t dissolve, you might be wondering if it becomes less effective, or if it can cause undesired side effects such as making you feel tired or dizzy. These side effects can occur, but there are a few simple steps you can take to make this a non-issue.

The 3 most common reasons why your creatine isn’t dissolving are:

Creatine already has limited solubility (the ability of a substance to dissolve).  When you don’t use enough liquid, the issue is more noticeable.

The majority of research suggests that 3-5g taken daily is the most effective dose to use long-term.  You want to make sure that you are using at least 1 cup (8oz / 250mL) for every 5 grams of creatine you are taking. So if you take only 3g of creatine, you should use at least 5oz (about 148mL) of liquid.

Wondering if you can take creatine with milk? Check out Can You Mix Creatine With Milk? (Yes, Here’s How To Do It)

Powders tend to dissolve worse in cold liquids, and it’s significantly more noticeable with a powder like creatine that has poor solubility.

While you don’t necessarily need to use a boiling liquid, your creatine will dissolve better in liquid that is room temperature or has heated slightly.

As I’ll explain below, creatine monohydrate is the most popular form of creatine.  But because it’s so common, this means that poor-quality supplements often make it onto store shelves. You want to make sure that the creatine you buy is third-party certified.

Learn more about creatine in the article Types of Creatine.

Should you take creatine? If so, when and how much?

What Forms of Creatine Dissolve Better?

Creatine HCL (creatine hydrochloride) is the second most common form of creatine sold on the market today.  It dissolves considerably better than creatine monohydrate, meaning that a smaller 1-gram dose is as effective as a 5-gram dose. But the one drawback is that this form of creatine tends to cost quite a bit more.

How Can You Fix Creatine That Isn’t Dissolving?

The simplest way to get creatine to dissolve better is to use a sufficient amount of liquid (at least 250mL / 8oz per 5g of creatine monohydrate).  In addition, dissolving the creatine in a warm liquid will increase the solubility.

It’s also important to make sure that you are purchasing a trusted, high-quality brand that is third-party certified to make sure you’re getting the purest creatine product.

But there’s one other simple factor that often gets overlooked: stirring or shaking.

If you are mixing your creatine with a warm liquid in a shaker cup, be sure to open the lid slowly after shaking, as there might be a slight pressure buildup and you may end up with liquid splashing out.

One thing we don’t recommend is dry scooping creatine. Learn more about the drawbacks of doing this in Can You Dry Scoop Creatine? Benefits, Risks, & Effectiveness.

Does Creatine Need To Fully Dissolve for It To Be Effective?

There is no definitive evidence to suggest that creatine is less effective when it isn’t completely dissolved.  However, when creatine is poorly dissolved, there’s a higher possibility of undesirable side effects such as bloating or cramping.

The bloating and cramping that can occur with creatine happens because creatine that isn’t dissolved fully can draw water into the stomach or intestines, leading to belching and/or diarrhea.  But this is usually connected to taking larger doses of creatine and is unlikely to be an issue with the normal recommended dosage of 3-5g.

Learn more about what you can do if creatine causes stomach issues in Creatine Makes Me Feel Sick: Why & How To Fix?

How Do You Fix Clumped Creatine?

Creatine can absorb some moisture from the air and start to clump if it isn’t stored with the lid on tightly. You may be able to break up the clumps simply by shaking the container vigorously. If that fails, you may also consider using a utensil such as a butter knife to break them up.

Does Creatine Dissolve In Hot Water?

Yes, creatine dissolves more effectively in hot liquid than in cold liquid, and the hot liquid will not damage or affect the quality of the creatine.

Does Creatine Dissolve In Cold Water?

Creatine does not dissolve in cold water very well.  It can be partially dissolved, and if you use a lot of liquid it may dissolve somewhat, but it is still more difficult to get creatine to dissolve in a cold liquid.

Does Creatine Dissolve In Milk?

Yes, creatine can be mixed with milk while retaining all of its benefits. It’s also possible that creatine can be absorbed more rapidly into the body by mixing it with milk.  By combining creatine and milk you get extra calories, macronutrients (protein, carbs, and fat), and calcium.

Does Creatine Dissolve In Coffee?

Yes, creatine will dissolve in coffee.  However, it may change the flavor of your coffee, so if you are particularly fond of coffee, you may want to dissolve your creatine in a different liquid.

Does Creatine Dissolve In Juice?

Creatine will dissolve in juice. For many years, mixing creatine with juice was a popular method of consuming it because it was thought to increase absorption.  However, mixing creatine in things that contain high refined sugar content can also cause some digestive distress.

Creatine is one of the most well-researched and safest supplements that you can consume.  Getting a high-quality creatine supplement that dissolves well can be the difference between feeling great and feeling bloated.

Knowing when to take creatine and how to take it most effectively will ensure that you get the best results possible.  Here are some additional resources to help you understand creatine better:

Jon McLernon (aka Coach Jon) is a Precision Nutrition Level 2 Certified Master Coach. With a background in chemistry and psychology, Coach Jon has a passion for supplement/nutrition science and behavioral psychology. When he’s not helping his clients crush their nutrition goals, he’s usually trying to wrangle a busy toddler (and get him to eat more veggies), or he and his Aussie wife are off on another globetrotting adventure!

10 Low Sodium Pesto Sauce Brands (Plus Ones To Avoid)

Can You Mix Collagen Powder With Soda? (Pros & Cons)