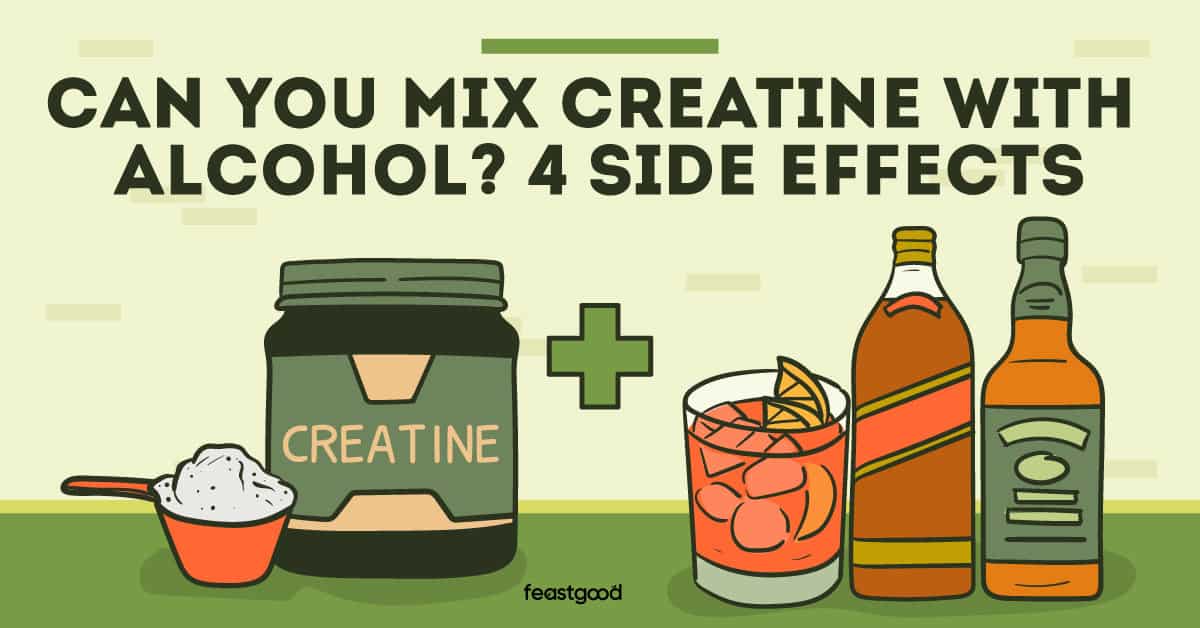 So it’s important to understand if alcohol and creatine can be mixed, consumed separately, or if drinking alcohol defeats the purpose of taking creatine.

If it’s not realistic for you to stop drinking alcohol altogether, or you want to enjoy the occasional drink, then it’s important to understand how you can minimize the interference effects between alcohol and creatine.

Can You Drink Alcohol While Taking Creatine?

If you’re serious about improving your performance and body composition then I suggest giving up alcohol for the time being to focus on your muscle-building goals.

If you’re okay with diminishing returns for the sake of having a few drinks, then you’re fine to have a couple of drinks per week.

What you should avoid altogether, though, is consuming alcohol daily; there is no point in taking creatine if you’re going to drink every day.

Side Effects of Taking Creatine With Alcohol

The side effects of taking creatine with alcohol are:

Should you take creatine? If so, when and how much?

Alcohol is a diuretic meaning that it eliminates water from the body, which can lead to dehydration.

The diuretic properties of alcohol impact creatine because one of creatine’s functions is to pull water into muscles to increase cell volume, which encourages muscle protein synthesis (a precursor for muscle growth).

If there is a lack of water available for creatine to pull into the muscles, then creatine won’t be as effective for encouraging muscle growth.

Your body naturally produces 1 to 2 grams of creatine per day, but continued alcohol consumption, especially in high quantities, has a higher risk of causing liver damage, which would directly impact your body’s ability to synthesize creatine.

Should You Leave A Gap Between Drinking Alcohol & Creatine?

To be clear, creatine does not have to be taken around your workout to be effective (it can be taken at any time), but it makes sense to group your workout and creatine in the morning because alcohol affects both of these.

Having a gap between your creatine and alcohol consumption may help to prevent some of the interference effects by allowing creatine to be absorbed before alcohol could limit its absorption.

If creatine is properly absorbed without interference from alcohol, then the main concern becomes staying hydrated so that there is water available for creatine to pull into the muscle and alcohol doesn’t excrete all of the available water.

Follow these four tips for supplementing with creatine if you plan to consume alcohol:

Avoid consuming alcohol after a workout to give the body a chance to repair muscle damage and replenish energy stores so that you have a chance to reap the benefits of training and creatine supplementation.

I also suggest that you space out your creatine and alcohol consumption by having them at different times of the day.

Having them at different times could help to minimize the interference effects of these two substances.

When taking creatine while drinking alcohol, you need to drink between 0.5-1 litre of water per hour because both creatine and alcohol will be fighting over the available water.

To maximize the benefits of creatine you need to ensure that there is enough water available for it to pull into your muscles despite alcohol excreting water at a faster rate.

Focusing on a specific amount of water intake per hour (0.5-1L/hr) is recommended because it’s important to continually drink water throughout the day so that you’re adequately hydrated at all times.

Last but not, you should always consume alcohol in moderation but especially while taking creatine. The less alcohol you consume, the less likely you are to experience interference effects with creatine.

If it’s unrealistic to eliminate your alcohol intake, then I recommend you set a weekly drink limit, like 1 to 3 drinks per week. The CDC states that a moderate alcohol intake is equivalent to 2 drinks per day for men and 1 drink for women; however if you’re supplementing with creatine then it’s best to drink fewer alcoholic beverages.

Other Ways To Mix Creatine

Can You Put Creatine In Alcohol?

Technically you can put creatine in alcohol but if you do the alcohol will negate any benefits that creatine has because alcohol will limit the absorption of creatine and its effectiveness. If you want to take creatine, you should take it without alcohol.

Will Creatine Dissolve In Alcohol?

Creatine would dissolve better in room-temperature alcohol than in cold alcohol. However, creatine should not be added to alcohol as they have opposing effects. The alcohol will negate any benefits of creatine supplementation.

How Long After Taking Creatine Can You Drink Alcohol?

Oatmeal Make Me Gassy & Bloated: 5 Reasons & How To Fix