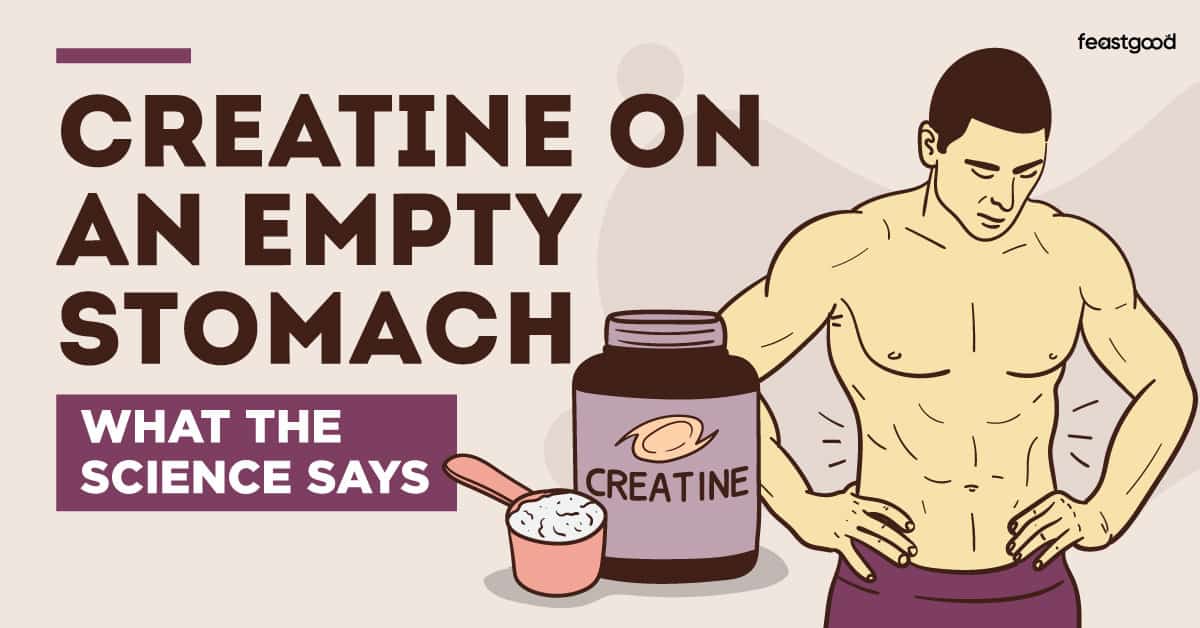 If you are looking to start taking a creatine supplement to support your strength gains, then you might be asking yourself when the best time to take this supplement is, and whether or not it should be taken on an empty stomach.

In general, it is best not to take creatine on an empty stomach since this could increase your likelihood of experiencing negative digestive symptoms such as nausea, stomach cramping, and diarrhea. Furthermore, studies indicate better outcomes in performance when creatine is paired with protein and carbohydrates.

However, as you’ll see below, the science is mixed and more research needs to be done to determine the full range of effects of taking creatine on an empty stomach.

One thing is clear though, whether you take creatine on an empty stomach or not, the key to getting results is being consistent with taking it every day (and not skipping it).

What The Science Says About Taking Creatine On An Empty Stomach

In this study, it was shown that taking creatine alongside a meal that contains a balance of protein and carbohydrates produced greater improvements in 1RM (rep max) strength and hypertrophy, compared to those who took the creatine supplement on its own.

This study was done on resistance-trained individuals and was completed over a 10-week training period.

Both groups ingested a supplement consisting of a carb and protein mix (50% whey protein and 50% glucose), but one group had creatine added to this mix as well (approximately 0.1 gram per kg of bodyweight).

This amount was broken up into 3 servings during the day (one in the morning, one shortly after a workout, and one before bed).

After 10 weeks of a structured resistance training program the group who had taken creatine with protein and carbs showed a 40% increase in 1RM strength in three separate exercises (barbell bench press, squat, and cable pulldown).

Key Takeaway: Ingesting creatine alongside a meal with balanced protein and carbohydrates can produce greater improvements in strength. Based on this study, we don’t know whether taking creatine on an empty stomach would have yielded the same performance benefits.

Study #2: The effect of combined supplementation of carbohydrates and creatine on anaerobic performance

Pure creatine monohydrate powder was used for this study, mixed in 200 ml of water.

Those in the creatine group took 5 grams of creatine 5 times a day for 4 days, during which time they were subject to a series of short 30-second anaerobic exercise tests.

The same was done for the creatine + carbohydrate group, but this group would also ingest 500mL of a commercially available energy drink containing 100 grams of sugar after every dose of creatine.

After a 4-day period of ingesting 25 grams of creatine per day, it was found that creatine supplementation improved average mean power by about 5.5% in anaerobic performance, compared to the no creatine or carbohydrate group where no changes were seen.

However, there was no further improvement in anaerobic performance when participants included carbs with their creatine. With that said, both groups that supplemented showed significant anaerobic improvements over the group that did not supplement.

Key Takeaway: While this study did conclude no improvements when taking creatine with food, it is important to note that it was a short term compared with study #1, and the participants only consumed sugar (no protein).

This study set out to learn whether or not creatine supplementation can cause gastrointestinal upset.

In the study, 59 male soccer players were split into 3 separate groups and participated in the study for 28 days.

After the 28-day period, the most frequently noted symptoms were diarrhea, stomach upset, and belching.

In particular, diarrhea seemed to present most frequently in the group who took the larger dose of creatine (10 grams) once per day compared to the group who split up the 10-gram dose.

Because the researchers didn’t tell the participants to consume the creatine with food or not, some participants may have done so, while others not.

Admittedly, the study authors concluded “other variables…such as food…require more investigation” when it comes to determining whether there are adverse effects of taking creatine.

Key Takeaway: Consider splitting up your daily dose of creatine throughout the day to avoid stomach upset.

Tips for Taking Creatine on an Empty Stomach

If you would prefer to take your creatine on an empty stomach, then there are a few tips that I would recommend in order to decrease your likelihood of experiencing any negative side effects.

Stick to a Smaller Daily Serving

Unless you are in a loading phase (where you consume a large amount of creatine in a short time period to saturate muscles), then it is advised to stick to a smaller daily serving of creatine (around 3-5 grams per day).

This will decrease the likelihood of experiencing negative digestive symptoms

Whether you decide to take creatine on an empty stomach or not, taking it around the hours of your workout has shown to be beneficial, and will increase the rate at which the creatine is absorbed into your muscles.

In order to ensure you are staying properly hydrated and to further support digestion, make sure you are drinking plenty of water with your creatine.

Drinking an extra 300-500mL of water per serving of creatine should be sufficient.

Take Creatine With a Meal Containing Protein and Carbohydrates

If you want to take your creatine with food, try taking it with a serving of protein and carbs either before or after your workout.

Be Consistent With Your Creatine Supplement Over Anything Else

If you are finding it difficult to take your creatine supplement at the same time every day, or you fluctuate between taking it with food and on an empty stomach, remember that the most important thing with creatine supplementation is just making sure that you are taking it on a daily basis.

There is currently very little evidence to support whether taking creatine at a certain time of day or taking it with food vs in a fasted state yields any significant improvements.

So try not to worry too much about whether you should take creatine with food or not, and focus on just being consistent with taking the supplement on a day-to-day basis.

Which Type of Creatine Is Best to Take on an Empty Stomach?

Choosing to take creatine in its different forms will ultimately come down to personal preference since there is currently no data to support whether one is better than the other to take on an empty stomach.

However, there is research to support that creatine monohydrate is the best form of creatine, since it has been shown to produce the best results compared to other forms of creatine, and is also absorbed more effectively by the body.

There is also some evidence to support that creatine hydrochloride is an effective form of creatine that might be easier on the digestive system, and it has been suggested that it is easier to absorb once it is consumed since it is more soluble in water.

While both creatine monohydrate and creatine hydrochloride are best taken in their pure form, you can often see creatine stacked with other supplements, such as pre-workouts that contain caffeine or other additives such as artificial sweeteners (like this creatine supplement here).

Consuming creatine in the form of a stacked supplement that contains ingredients such as caffeine and artificial sweeteners could increase your risk for digestive issues if taken on an empty stomach since both of these ingredients can be irritating to the gut.

Does Timing Matter When Taking Creatine on an Empty Stomach?

If you decide to take creatine on an empty stomach, the optimal timing recommendation is the same as if you are taking creatine with food.

However, it is important to reiterate that taking your creatine supplement consistently every day will still give you results, even if it is not during the hours of pre and post-workout.

Should You Take Creatine with or Without Food?

Most research suggests that taking a creatine supplement with a balanced meal of protein and carbohydrates can provide greater improvements in muscle strength and hypertrophy for resistance-trained individuals. Taking creatine with food could also help to offset any potential digestive issues like nausea or cramping.

Can You Take Creatine First Thing in the Morning?

You can take creatine first thing in the morning with your breakfast meal if this is the best way for you to stay consistent with taking the supplement. However, some research has shown that ingesting creatine closer to exercise in a pre or post-workout meal resulted in greater muscle and strength gains.

Does Creatine Make You Thirsty? 6 Reasons

Do I Need BCAAs If I Take Whey Protein? (Yes, Here’s Why)