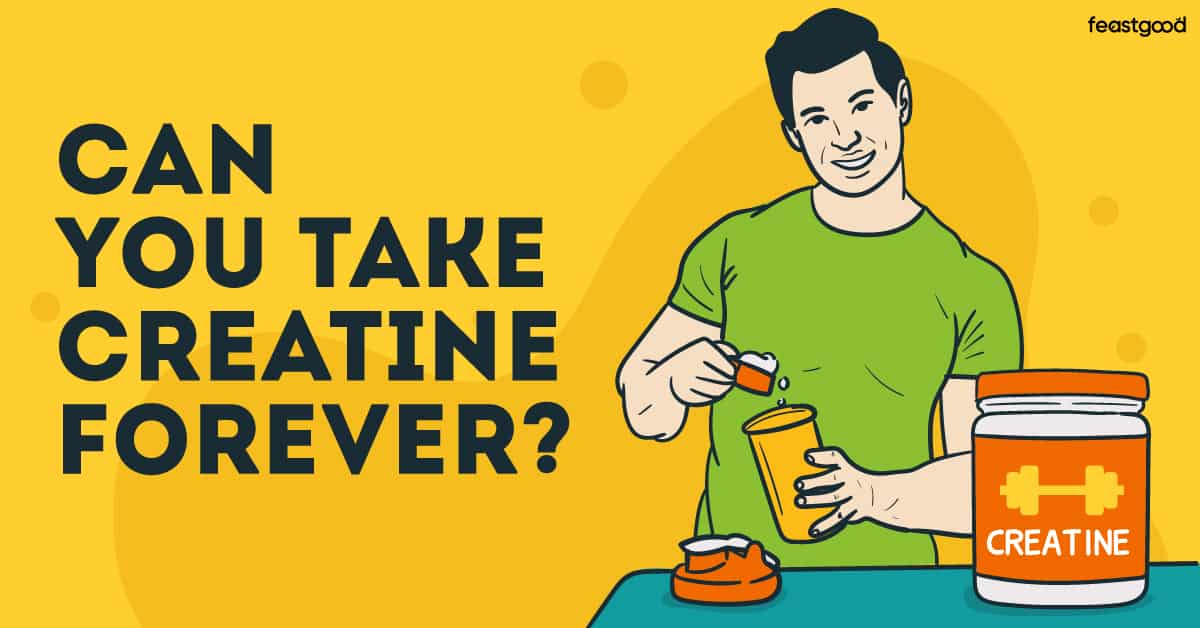 The strength and performance benefits of creatine are well known and heavily promoted, leaving many curious about whether it is safe to continue taking it forever (so that the creatine gain train never has to stop).

Can you take creatine forever? Taking creatine forever generally appears safe, but it might not always be necessary. The balance of research suggests that taking creatine within the recommended dosage amount of 3-5g daily is unlikely to yield any adverse effects even with long-term use.

There have been over 1,000 studies on creatine conducted with billions of creatine servings ingested as part of those studies. The common theme overwhelmingly is that creatine poses no adverse health risks for the average person.

In this article, I’ll discuss whether creatine’s efficacy and safety stacks up for continued use over the course of your lifetime.

Long Term Use Of Creatine: Are There Side Effects?

Creatine consumption over long periods and its effects on the body has been investigated extensively, with evidence indicating no detrimental clinical reactions or changes in health markers.

What The Science Says

Much of the available data suggests that long-term creatine supplementation does not result in adverse health effects for generally healthy individuals.

So, if you fall into this bucket, it is likely you’ll be able to enjoy the benefit of creatine over sustained periods without any concern over its impact on your health.

You Still May Have Some Side Effects Though

With that said, some side effects, like gastrointestinal discomfort, from creatine use have been observed but these are not connected to the duration of your creatine use and often have more to do with how you are consuming creatine or other environmental factors rather than the supplement itself.

I’ve written previously on some of the known side effects:

In addition, while studies have found that creatine is safe and there haven’t been any remarkable impacts on renal function, typical advice around creatine use generally is to consult a doctor if you are taking medication placing demands on your renal system.

This is because creatine supplementation may put added stress on your kidneys or liver already working hard to fight illness. This advice is independent of how long you would intend to supplement with creatine.

Taking Creatine For Years Straight: Is This Good?

Using creatine for extended periods compared to shorter durations could yield more benefits because your muscles are exposed to higher creatine stores for a greater period of time.

Creatine supplementation has some convincing results on strength and muscle mass:

Given creatine is safe to take long-term and creatine use provides such significant benefits, it seems like taking it for years straight is likely to be more good than bad.

Are There Reasons To Cycle Off Creatine?

Ultimately, whether you want to cycle off creatine is going to come down to personal preference.

If you don’t have an underlying medical condition, aren’t experiencing any side effects with creatine, and you’re wanting to continually:

There is no need to cycle off creatine. Evidence suggests creatine is safe for long-term use.

Don’t be fooled by the naysayers, who will tell you that you need to cycle off creatine to stop your body from getting used to it and experiencing reduced benefits as a result.

Perhaps you have heard these myths:

Myth 1 – Cycle creatine so you don’t build a tolerance

Once you have built up creatine stores in the muscles and continue to replenish these stores with creatine supplementation your muscles are likely to be operating optimally as they are being provided with consistent energy to work hard.

With continued creatine use you may not feel the initial boost you did when first starting using creatine, but this doesn’t mean your body has developed a’ tolerance’ or that it isn’t benefiting from it.

Studies have indicated that your body’s natural production of creatine may slow down when supplementing but it will return to its usual levels of production within a couple of weeks of stopping creatine.

With that said, just because creatine is generally considered safe for long-term use, it doesn’t mean you need to continue to use it indefinitely.

Maybe you are taking a training break, going on holiday, or changing up your style of training, or maybe you want to save some cash and cut down on supplement costs. Whatever the situation, cycling off creatine for short or longer periods of time is ok too.

Stopping creatine won’t reverse any muscle, strength, or performance outputs achieved while supplementing with it. As long as you aren’t in a harsh nutritional cut or stepping away from training for a significant period of time, you won’t lose your gains.

The general consensus around recommended creatine dosing for long-term use is 3-5 grams per day.

This dosing recommendation has proven to be both safe and effective when used for sustained periods of time.

Other Tips For Taking Creatine Forever

If you’re looking to keep creatine supplementation in your daily routine now and into the foreseeable future, consider the following:

Where your training, personal or medical circumstances change, review whether creatine still fits in with your plans and your goals.

If you’re planning on taking creatine for the long term, make sure you use a supplement that is quality controlled and of the purest form so you know you’re not putting rubbish in your body.

Regardless of how long you’re on creatine, if your nutrition isn’t dialed in and you’re not training appropriately, you’re unlikely to reap the benefits.

The main thing that will get in the way of me taking my creatine is my memory because the bulk of the literature suggests continued use within recommended ranges is unlikely to cause any health concerns. So I’ll continue taking creatine as long as I want to and as long as it continues to support my training goals.

Top 10 Foods High In Calories But Low In Sodium

Can You Mix Whey Protein With Eggs? Benefits & How To Do It